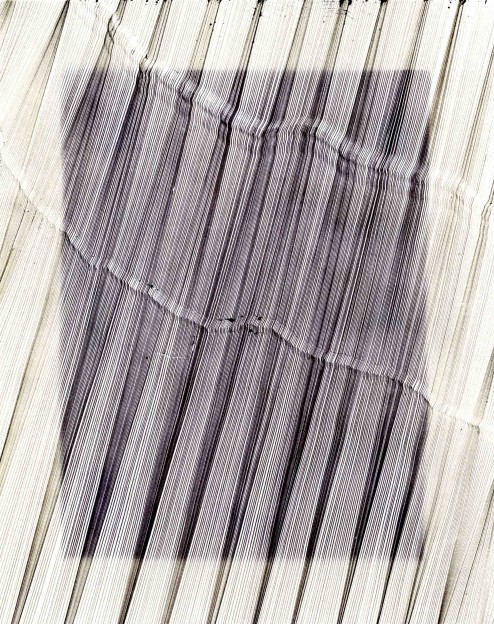 Steven Maybury: I’m an Irish artist living and working in Dublin.  I’m obsessed with travelling and work part time as a photography teacher. I’m conscious not to emphasize only my training or education when it comes to talking about my background in an art context so Ill only mention it a little. I know I can trace the most influential moments for my deciding that art could be a path to my late teens when I started to think about travel and my place in the world. I’m going to make this more personal and see if that helps create a scope of my background and how I ended up where I am.

-Father was a picture framer so I was always surrounded by pictures
-Grandfather was an amateur photographer and painter
-Brother and a first Cousin I’m very close too are both creative writers and both had wild imaginations when we were young where we spent a lot of time together.
-Bought a one way ticket to China when I was nineteen not knowing what was going to happen next and then travelled the world mostly hitchhiking where I first circumference the globe.
-Came back as a self thought photographer and that became my living where I now bring photography classes to different destinations on travel adventures.
-Enrolled in Art collage as soon as I got back from travelling and studied in both a rural (west coast) and urban (east coast) context In Ireland.
-Last summer I drove to Mongolia from Dublin in an old Ford Fiesta through the Middle East and central Asia.
-I generally travel in a suit. 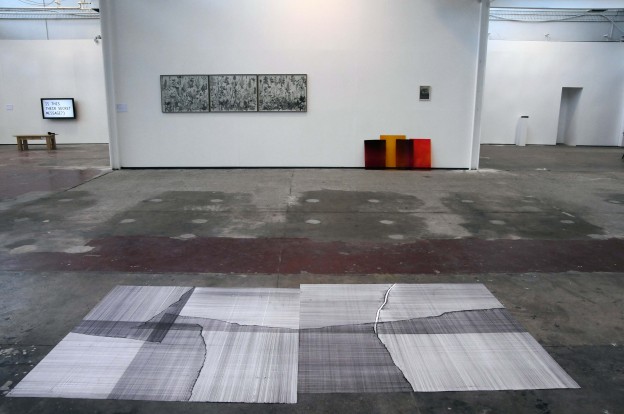 RB: Over the past twenty years or so, anthologies, conferences, dedicated degree drawing courses, research papers, have proliferated. They all speak of the ‘expanded field’ of drawing, expanded not only in what can be counted in as drawing, but also in how we can think about drawing. Why do you think there has been such an upsurge in interest in drawing?

SM: Drawing is one of the most intuitive processes of thinking and art making there is. It’s expressive, direct and honest. We have so many mediums to think about when considering art. Especially in art history context or critical context when referring to arts past and relating it to contemporary art. For me I think it’s a reaction. Drawing has always been there and very prevalent in the art world as a practice and a process but its popularity could be due to the complexity of our time and its new mediums, and the cross overs that are inevitable in these mediums. Photography for example is still so new and has changed and evolved in many ways so quickly since the early 1800’s from being totally analogue to highly technical. Example, in GTA V the game you can walk around and take pictures within the game and create the most stunning street photography. The Internet is the same since being launched in 1994. These are complex mediums to work with, and when they begin to rely on each other, thought can become really complex. Earlier examples of this can be seen with Marcel Duchamp in the early 1900’s. Duchamp is regularly referenced as a pioneer who changed how we think and make art. Duchamp’s concepts are very complex and intricate with the communicating and relating of objects and materials into our displaying of visual art and thinking with his use of the ready made. The freedom and intuitiveness with drawing as a process or a practice can still seem so fresh for one of the most primitive modes of expression. It’s useful in a time of entanglement within mediums to have something so direct. John Berger in his book ‘On Drawing’ talks about the idea of drawing and it sometimes is not perceived as a serious “medium” as Its often seen as a lesser from of expression. A starter point exampling the doodle or the sketch. Drawing as a process of thought. But here I find its strength, as does Berger. With what could possibly be the birth of an idea or the first time an idea materializes into our world from our head. It’s so primal as an activity. Its beauty and necessity I think is found in its simplicity for viewing and making. 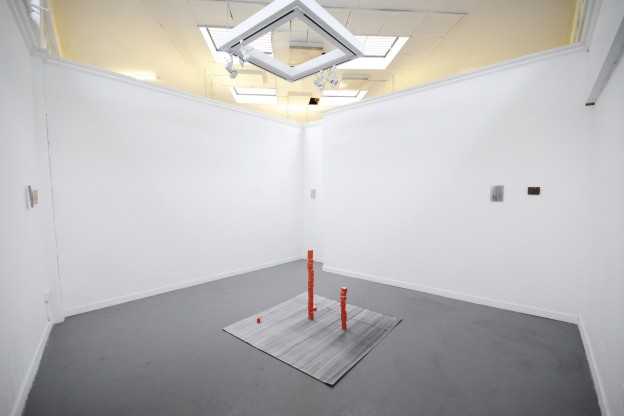 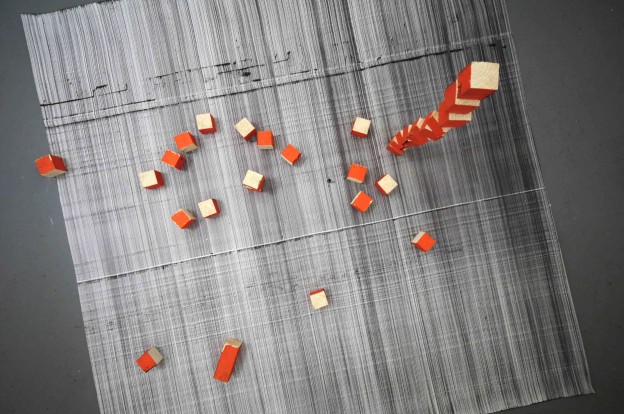 RB: How would you define your drawing practice?

SM: I use drawing as an entry point mostly to thinking or engaging with things, It’s often the outcome in my work too but not always and is very seldom exhibited without other things displayed beside my drawings. It comes very naturally to me to react and process ideas through drawing as a first step. But my practice hosts many outlets in its making, including sculptures, installations and photographs. What I consider to be drawing as mentioned in the above question is quite expanded. I don’t really set parameters on what it is or can be. I’m not too sure if I can define it or if I need too. Some drawings I make are quite rudimentary in how they are formed and seen as drawings and are perceived as drawings. Others, for example: Recent drawings I made and choreographed from the activity of skateboarding, the results were exhibited as photographic prints, these prints resembled documentations of drawings (scratches) on the skateboard were formed the same way I would draw with a different utensil. I can’t define a drawing to be only ‘a picture made by hand with a pencil or a pen rather than that of paint’ as the Oxford dictionary defines it. Why would its counter be only paint? So I prefer to not define my practice as a drawing one and leave it open.

In relation to its viewing and perception to others, that also changes. Its considered process based drawing because how I form them with a process, which can change from drawing to drawing, or minimalist due to its aesthetic nature but I find myself rejecting these terms. Similar to the composer Philip Glass, where there are too many components to make what we make to be considered minimalist, especially in thought. Glass defends his music by stating his compositions are: “music with repetitive structures” which he has helped evolve stylistically. I would think along these lines, as it’s not a paring back of ideas, but a use of structure to form something. My work for me resonates more to areas of abstract expressionism, which in post-war movements was what a lot of minimalist work was opposed too and in fact rejected. So I’m not really sure how to define my practice so I tend not too and instead just work and make stuff and leave that to others. 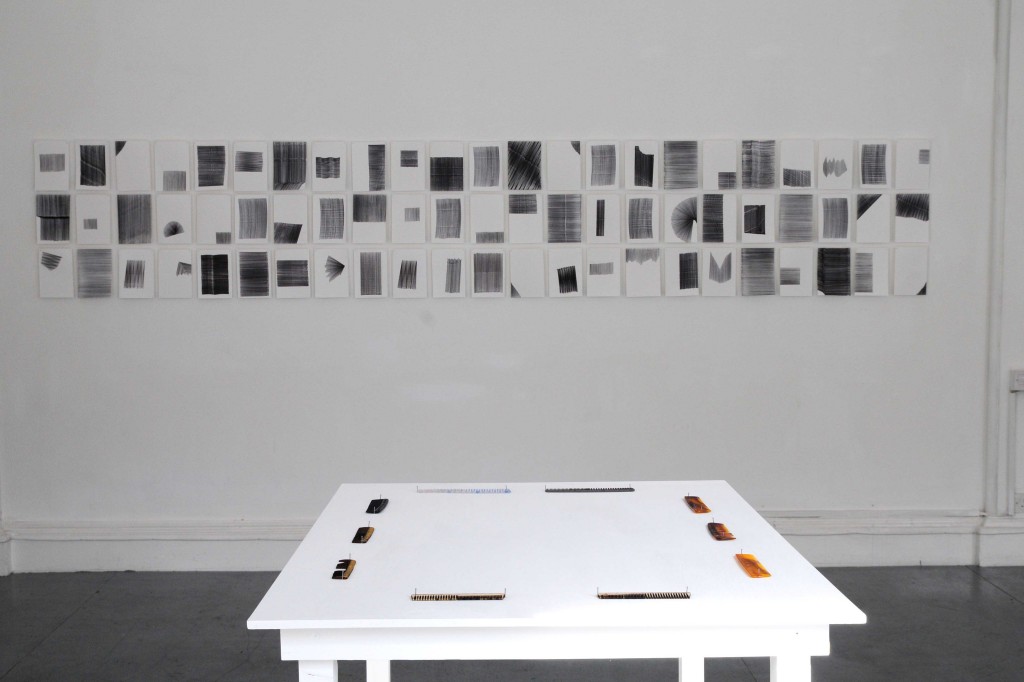 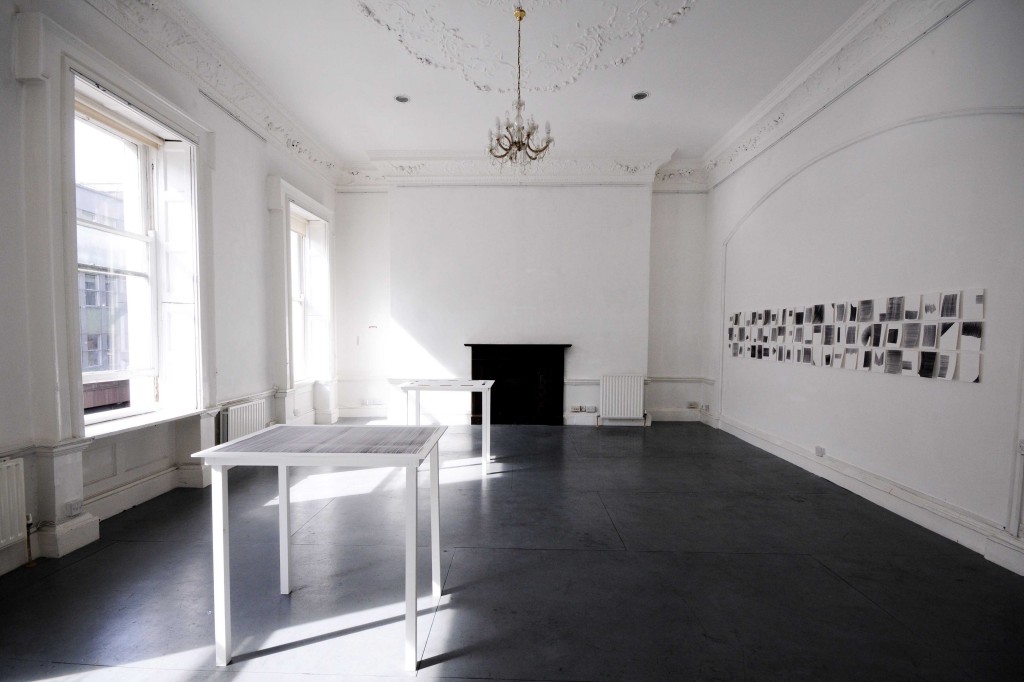 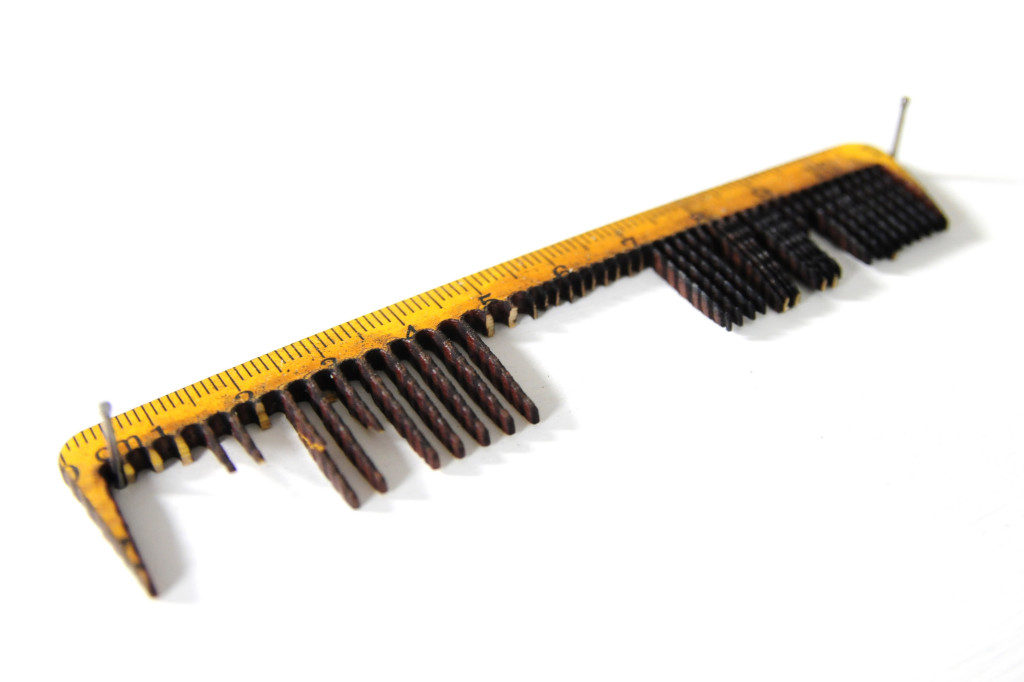 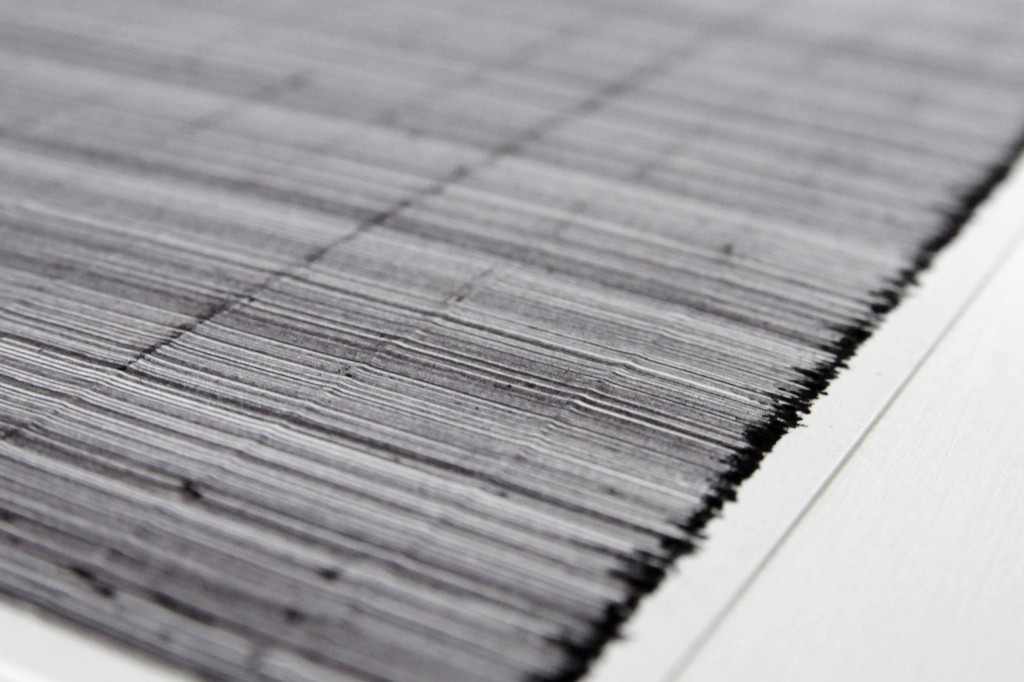 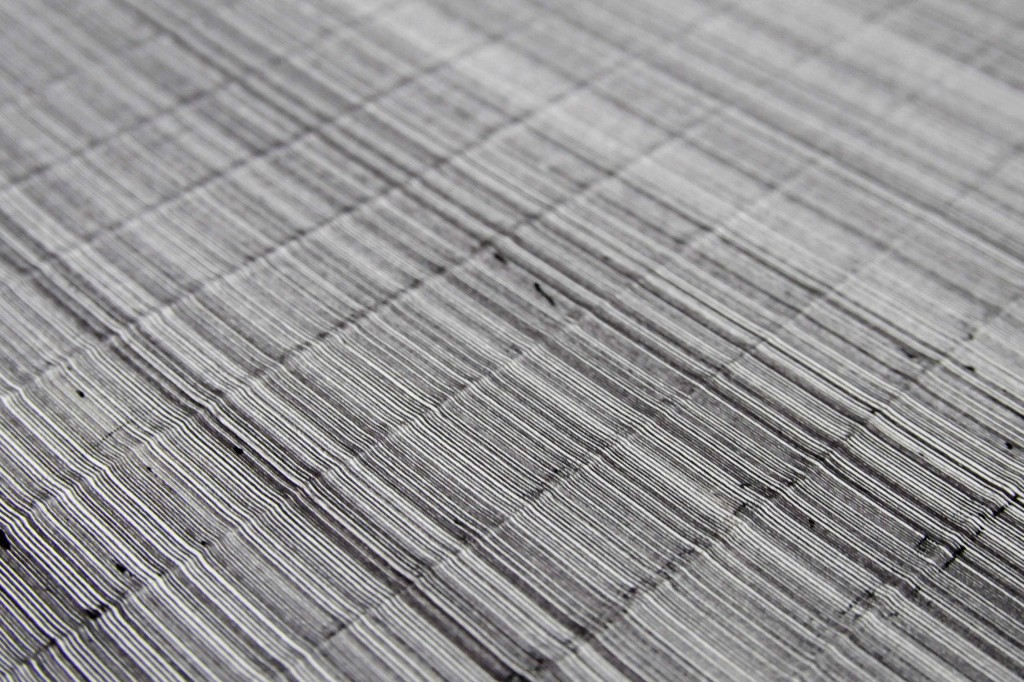 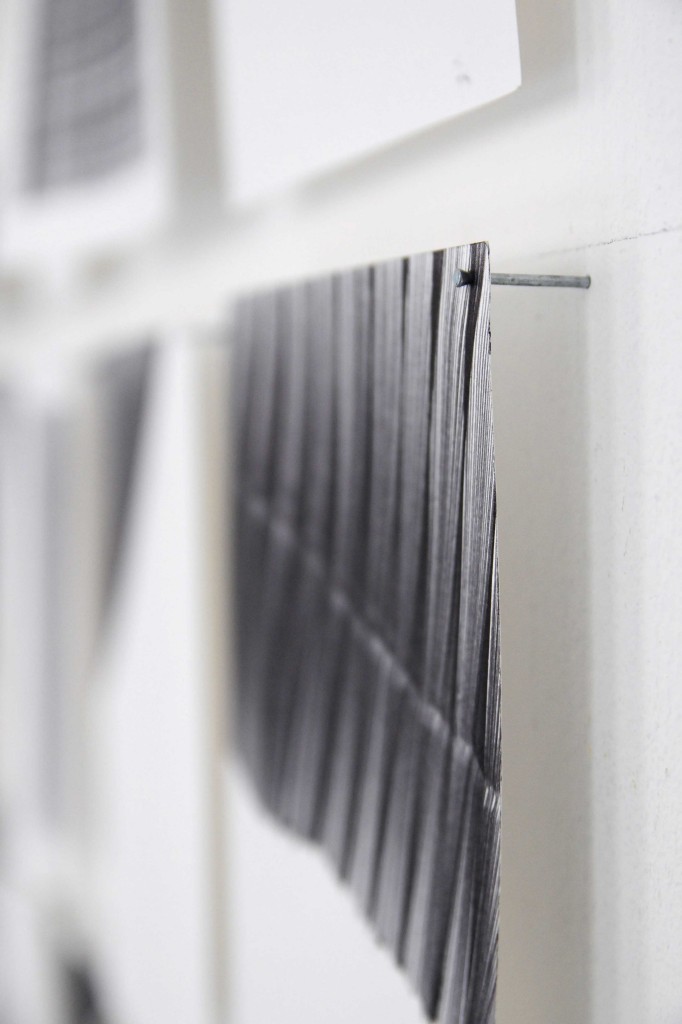 RB: Do you consider drawing a language? And, if so, is this language sometimes non-transferable to other languages, for example, the written or verbal language?

Steven Maybury is an Irish artist currently based in Dublin whose practice is primarily concerned with drawing. He is currently working towards a publication with his drawings supported by The Fingal County Council, an exhibition with The Drawing Works and several solo exhibitions in 2017. Steven is also involved in several creative projects, including The Mundi Project commissioned by Luciano Benetton. Steven’s work has been invited to present itself on The Drawing Suite, European drawing blog in 2015 and The Drawing Works, a blog and platform for drawing based in London in 2016. In 2016, He became a Mart gallery artist. Steven is currently working towards several international solo exhibitions and groups shows in 2017. Since leaving art college in 2012, he has been awarded a number of artist bursaries, awards and residencies, and in 2013 took part in a European touring exhibition, ‘40-40-40’, which showcased new talent in Ireland’s state art collection. Solo and two-person shows include: ‘Jigsaws, Combs and Rulers’, Eight Gallery, Dublin (solo, 2014); ‘Groove Chronicles’, Market Studios, Dublin (solo, 2014); ‘Radical Line’, Pallas Projects, Dublin (solo, 2014); and with Claire McCluskey: ‘Synthesis I’, Eight Gallery, Dublin (2013), and ‘Synthesis II’, Tactic Gallery, Cork (2013). In 2014 he also was invited to present his drawings on The Drawing Suite, a blog for contemporary European drawing. Recent group exhibitions include: The RHA Annual, Dublin (2015 – invited); Glitch art fair, Rua Red (2015); ‘Re-ignite’, Customs House, Westport (2015); and ‘On Beauty’, Roscommon Arts Centre (2015); The Drawing Works, Camden Image gallery, London (2016) Anicca, The Library Project (solo, 2016); Dukkha, Platform Arts (solo, 2016) View all posts with Steven Maybury →