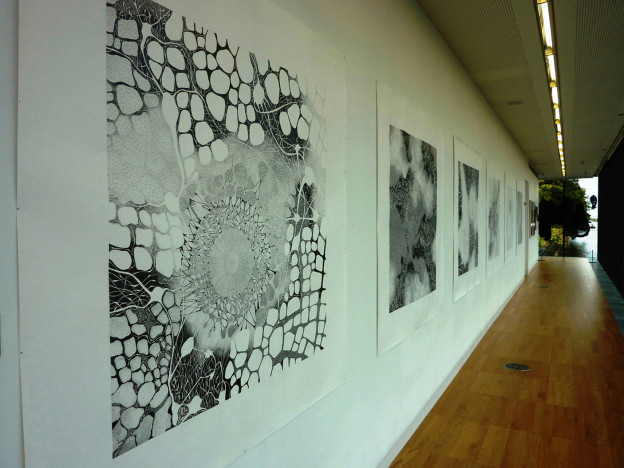 Richard Bright: Your degree show included six large (150 x150 cm) graphite pencil drawings on paper. Why did you decide to work at this scale and exhibit work that was devoid of colour?

Michael Geddis: During my training to become a veterinary surgeon, I spent a lot of time looking at microscopic structures in sections of animal tissues using a binocular light microscope. I was enthralled by what I saw and spent many hours sketching my observations enthusiastically. An anatomy/embryology lecturer, on examining my sketchbook in detail, commented rather prophetically that I was wasted on veterinary science and should have been an artist instead!

One of my abiding memories of peering through the binocular eyepieces of a microscope was the feeling of being immersed in a weird microscopic world.  It was like a (very) retro form of virtual reality!  I decided to produce very large drawings so that viewers could share this visual experience. When standing at a comfortable viewing distance in front of such large drawings, the viewer’s visual fields also become filled. I embedded areas of fine detail in each drawing to encourage viewers to step forward and become fully immersed in my imagined cellular landscapes.

I made an early decision not to include colour in this work. During my veterinary training, I encountered many different colourful tissue stains used to identify specific structures in microscopic sections. However, for me, the real beauty of the microscopic structures that I had encountered lay in the intricacy and delicacy of the forms contained in them. Colour would be a distraction.

RB: Can you explain, in broad terms, how your scientific background and artistic practice interconnect with each other?

MG: I adopt a pedantically methodical (or “scientific”) approach to what I do artistically. My drawing activity in the studio is underpinned by protracted research and reflection as I strive to intertwine artistic and scientific insights in a synergistic way. However, I recognise that memory, intuition and imagination form an increasingly pivotal part of my studio processes. Therefore, I identify strongly with remarks made by Gemma Anderson (2011):

Over years of practiced observation, I have been creating a bank of forms, stored in my memory.  Drawing is a mnemonic device, and the more I draw; the more forms and ideas enter my collective memory.

I actively use my sketch book as a means of committing a new pattern or form that I have encountered to memory. The act of sketching is a both a cognitive and motor rehearsal.  Whenever I am working on what will become a finished piece, I generally rely on memory, intuition and imagination and do not use source images or sketchbooks. In other words, I work with blank studio walls and an absence of sketch books/ photographs so my studio resembles a monastic cell. I like it that way.

Odilon Redon remarked, in his letter entitled Confessions of an Artist –

I have made an art according to myself. I have done it with eyes open to the marvels of the visible world, and, whatever anyone might say, always careful to obey the laws of nature and life.

Like Redon, I identify myself (a retired-scientist-turned-artist) to some extent as an outsider. I approach drawing and painting with the same methodical inquisitiveness that I pursued my previous career as a scientist. For me, there is much to explore and marvel at in the world. My work embodies celebration of the sheer beauty and elegance of the created abundance surrounding us. My drawings are a scientifically-flavoured intuitive response. 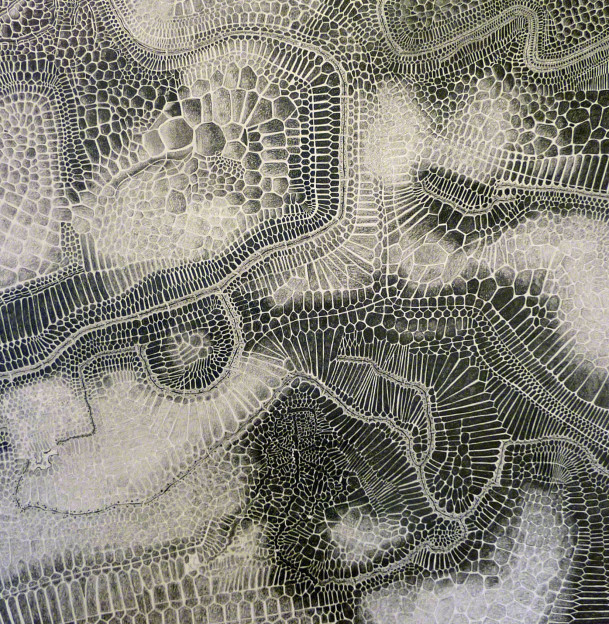 RB: In your previous answer, you allude to a possible function for your work in terms of celebrating natural beauty. Do you envisage contemporary art and/or your work having some sort of societal function?

MG: Modernism and postmodernism reflected a radical shift of artistic focus from nature to culture. However, the contemporary all-pervasiveness of a scientific world-view potentially re-connects Western society with nature. Such a re-connection could well be an antidote to the culture of mass media (which is mostly devoid of real objective facts, logic or even coherence). As Suzi Gablik (2004) put it:

We need an art that transcends the distanced formality of aesthetics and dares to respond to the cries of the world.

Whilst it would be clearly wrong to regard art simply as a tool to revolutionise society’s perspective about art, science, nature or creativity, this statement from Stephen Farthing (2000) is also worth bearing in mind:

The point of art is that it works its way into society and improves our thinking and society’s sense of order.

If my artistic practice can meaningfully embrace to any extent this kind of function as part of its synergism with science, then it could be significantly enriched. The sustainability of such a strategy probably hinges on me successfully maintaining an authentic connectivity with the underlying essences, rhythms and patterns of nature. In my developing practice, I am hoping to maintain durable research-based foundations that support an original visual expression that is intuitive, imaginative and aesthetically/conceptually compelling.

RB: Why is nearly all your work in a square format?

MG: As well as spending hours looking down a binocular microscope as a veterinary student, I also spent a fair amount of time looking at microscopic images in text books. Back in the late 1970s, images of microscopic sections were captured by simply clamping a camera lens to the circular eyepiece of a light microscope. The format of image most readily obtained from a circular eyepiece is a square and this was the format of nearly all the illustrations in the histology and histopathology textbooks that I used. Therefore, it seemed to be completely natural for me to use a square format.

RB: What about the large blank margins around all your drawings?

MG: The photographic plates of microstructures that I learnt from were usually presented separately from the text and had a lot of white space around them. Again, this just seemed to be the natural thing to do when I made my first drawing and I’ve stuck with it since.

The reason that I’ve kept the large white space around the drawn area is because I believe it forms an important part of the composition. I consider it to be an integral part of the drawing and would never consider cropping the margins on one of my drawings. I am amazed at how powerfully it interacts with fragments of white space inside the drawing and amplifies or subdues them depending on the circumstances.

I enjoy achieving some degree of uncertainty for viewers with respect to their recognition of shapes and patterns within my drawings. Shapes and patterns formed by pencil marks compete for visual dominance with others delineated by white space.

I have become quite interested in the psychology of shape and pattern recognition. I am intrigued by the automatic hard-wired strategies that humans and animals use to streamline this process. The use of “searching image” and “selective attention” provides particularly useful forms of visual short-hand enabling the brain to quickly decode important visual cues in confusing environments.

In some of my most recent drawings, like the Ballinglen Lichen series, I have been probing the limits of human abilities to decipher superimposed and interlocking patterns or forms.   I want to produce drawings that stop just short of dissolving into an indecipherable nothingness. 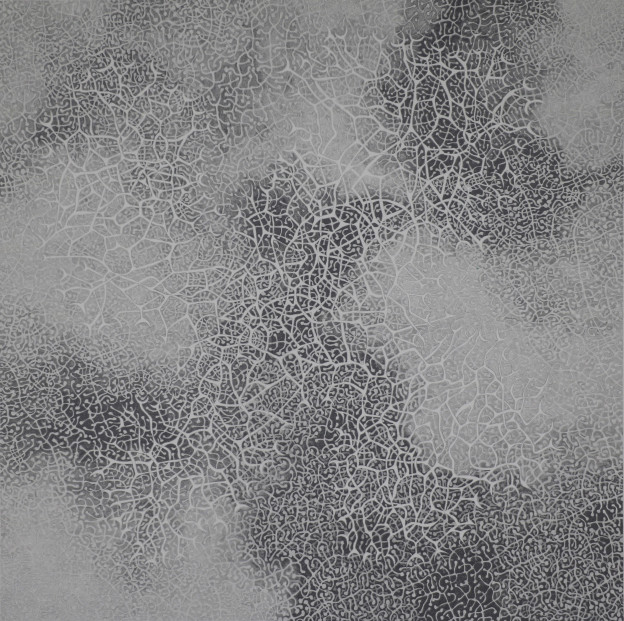 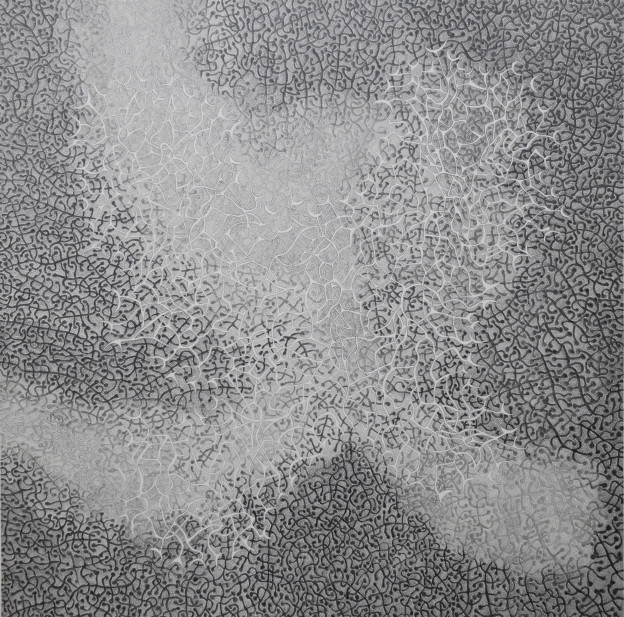 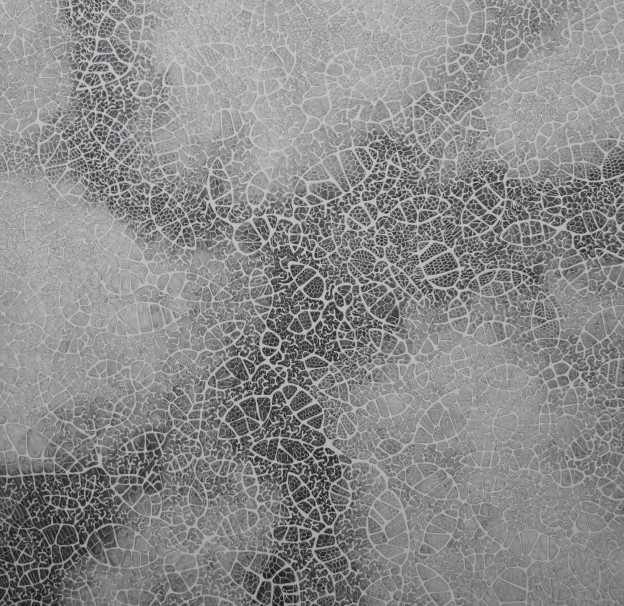 RB: Can you describe any other visual features that characterise your work?

Born in 1960 in Belfast, Michael Geddis worked for over 25 years as a veterinary surgeon before ill health retirement. In 2013, he graduated from the Ulster University’s Belfast School of Art with a First-Class Honours in Fine Art. He was awarded the James White National Prize for Drawing for his degree show work at the RDS Annual Student Award. Immediately after graduating, Geddis was selected as a resident artist for Bangor’s Project24 and spent nearly a year in a seaside open studio as part of an urban regeneration project. He concurrently benefitted from a membership award and bursary from Belfast Print Workshop and this enabled him to explore printmaking using his drawing skills. Since then, he has been working on an Arts Council funded project to make very finely detailed drawings using micro-surgeons magnifying loupes. He delights in the elegance of natural forms and finds tiny microscopic structures particularly inspirational. As an emerging artist, his artistic development has benefitted greatly from several generous bursaries, grants and residencies awarded to him. He has also enthusiastically embraced opportunities to exhibit right across Ireland and beyond. Later this year, some of his prints will be exhibited in a group exhibition of Northern Irish printmakers’ work in Washington, USA View all posts with Michael Geddis →