Drawing is the closest thing to pure thought, not in a philosophical sense, but in terms of the immediacy of the connection from eye to brain to hand. I draw, because I must, in order to understand. It is a way of knowing something. Drawing has a quality of intimacy in its practice and as an experience. Line has tensile strength; it has the potential to be both powerful and delicate. My work is non-representational and I arrive at this notional abstraction through making drawings in response to something external. In the last six or seven years my work has become increasingly informed by music. Using the language of drawing I create an equivalent of, a transcription of music. It is not a system of notation, not an alternative to a musical score to be reinterpreted, it is a response to the sound. Through layering and erasure I pursue the disintegration and rebuilding of form, giving the descriptive and emotional possibilities of music an equal importance with the drawn mark. I am fascinated by the correlation between the sound of plucked or struck strings, (piano, violin, viola and cello) and mark-making. Music has immense power but lacks the literal physical presence of sculpture or architecture. Parallel with the idea of relating sound to mark-making, I contemplate the im/possibility of making sound visible. 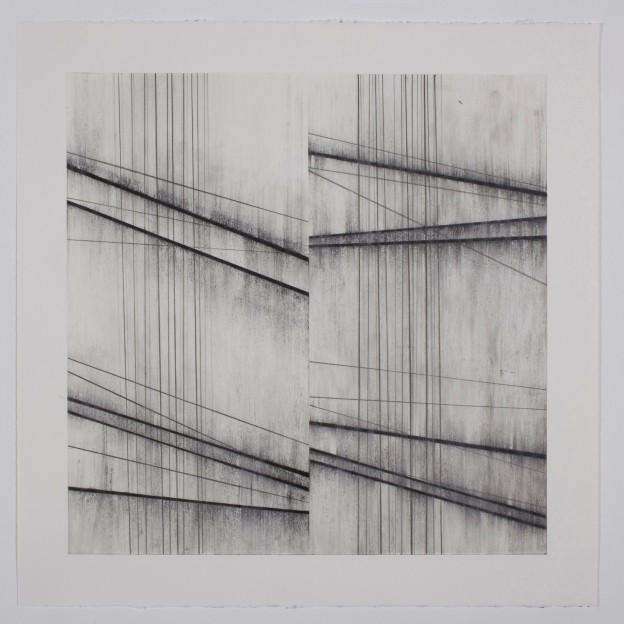 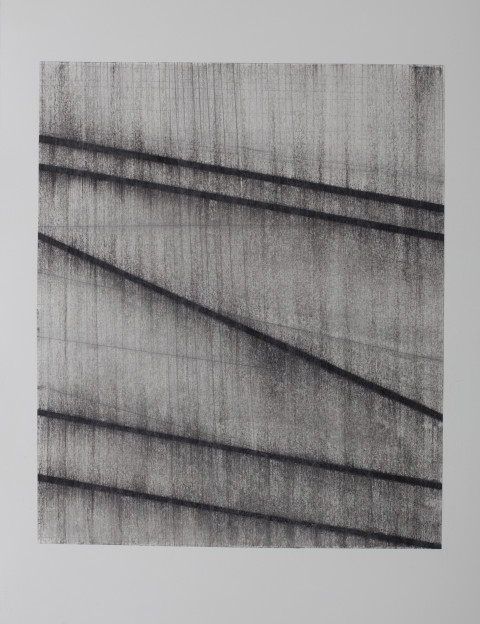 Sound waves can be recorded and they are a visual manifestation of what someone is hearing, but this visual record is silent.  Musical scores are only activated when they are ‘read’, when they become sound themselves. Musical notation equates to a map; the drawings of those sounds are the footprints or tyre tracks, the evidence of presence. Drawing and playing music are physical processes and the piano, the paper, the resulting marks and sounds connected by touch are an extension of the hands, arms and body making them. The meeting point between sound and line arrived at during the process of drawing, occurs through the performative element of movement and mark-making whilst listening. Music is transient, ephemeral. When it stops and the ‘performance’ of the drawing ceases, what remains is a memory, a trace and this residue is as silent as the original score.

I have made work in response to specific pieces of music by J.S. Bach, John Cage, Gustave Fauré, Gavin Bryars and Claude Debussy. The first Cage drawings, embracing the elements of chance and randomness, were a turning point in that they set me on a trajectory exploring music as a motif. The process revealed the connections between the scratching, tapping, snapping of graphite pencil, charcoal and ink-soaked string on paper and the liquid notes of his pieces for prepared piano. 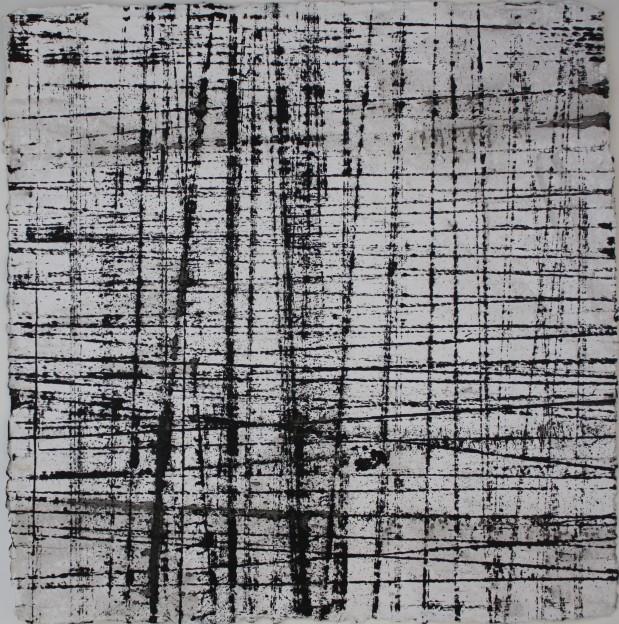 They led, by chance, to an exploration of the deeply emotional charge of J. S. Bach’s six Suites for Unaccompanied Cello; thirty-six separate movements. In the Bach drawings I pursued a deeper engagement with the music, creating an interaction of sound, vigorous movement and mark-making, whilst listening to the differing interpretations of the suites by Pablo Casals, Yo Yo Ma and Pieter Wispelwey. Throughout, however, it was the passionate, least measured interpretation by Pablo Casals with which I identified most closely. 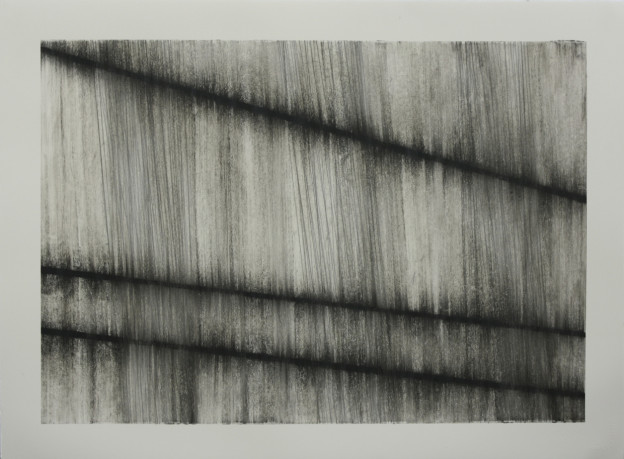 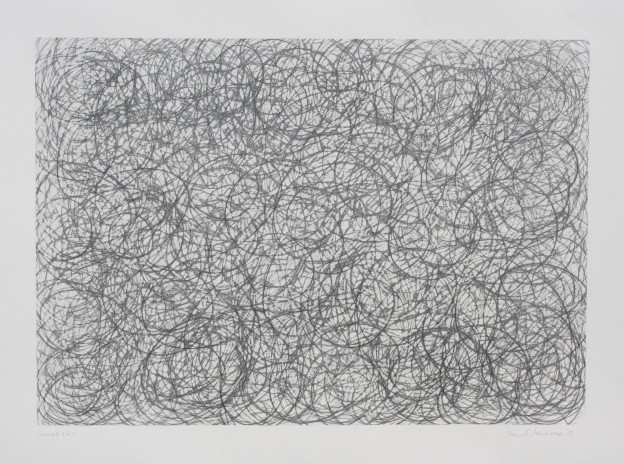 Intensely responsive to the mood and the major and minor keys of the different suites, the initial layers of each drawing, frequently executed at exhilarating speed, provided a free-flowing undercurrent of line and space over which I imposed a structure that acknowledged the measured framework of the music.

It is this controlled freedom that I continue to pursue in subsequent drawings.

The manipulation of media continued to be a crucial part of the process. 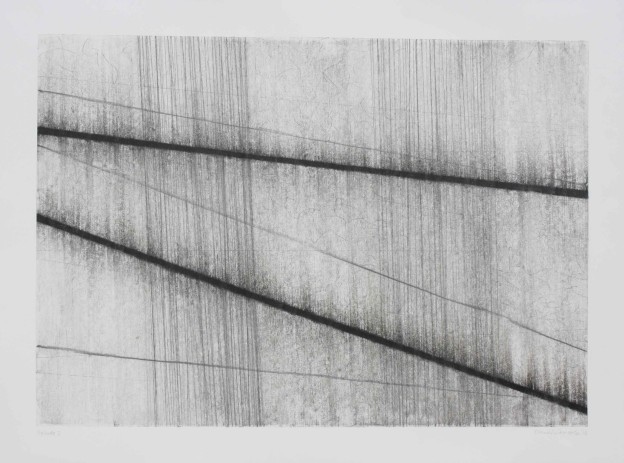 Returning to Cage, I made a series of works in response to his beautifully lyrical piano piece, ‘In a Landscape 1948’.  In these drawings the meditative line echoes the rise and fall of a landscape and the slow meandering progress of the melody.

At this point I began to play the piano pieces that I was drawing, thus contributing an additional layer of performance and practice.  (It is a moot point whether or not ‘performance’ presupposes audience.  Mine do not.)

In the summers of 2014 and 2015 I immersed myself in the music of Gavin Bryars and that of Gustave Fauré, in particular Fauré’s Sonata for Violin and Piano in A. I worked alternately in a small high-ceilinged studio space in the French countryside and in the vast echoing spaces of Chateau d’Oiron in Deux Sevres. Gavin Bryars The Listening Room is a series of pieces of music that were written for and recorded at the Chateau over twenty years ago.  Each piece of music is a response to a room in the Chateau and the whole suite is played on a loop in the ancient former kitchen which is now called the listening room. The drawings respond to the different rooms in various ways and also include observational drawings of the cracks in the walls of the room itself.  The whole was made into a short moving image piece called Snatched Moments.

The two sets of drawings are linked by their sense of place. The Bryars music, was site specific to Oiron and the Fauré was specific to the room in which I made those drawings. The differing acoustics of each location impacted on the work. In the company of Fauré my studio was in a sense my ‘listening room’. I was working in the same way with the same materials responding to both the sound and its echoes and the damaged walls but although there is a clear relationship between the two sets of drawings they resulted in very different resolutions. 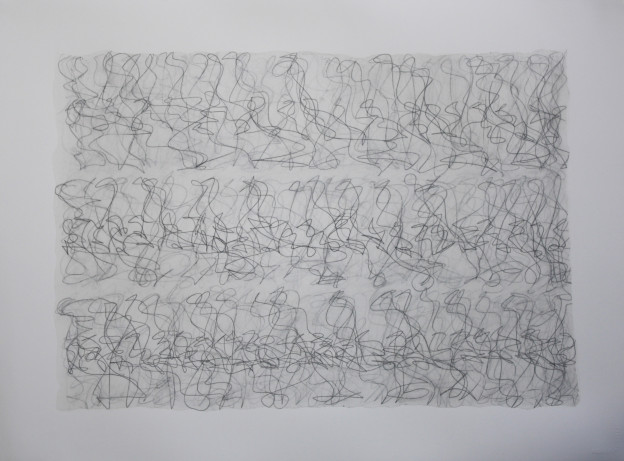 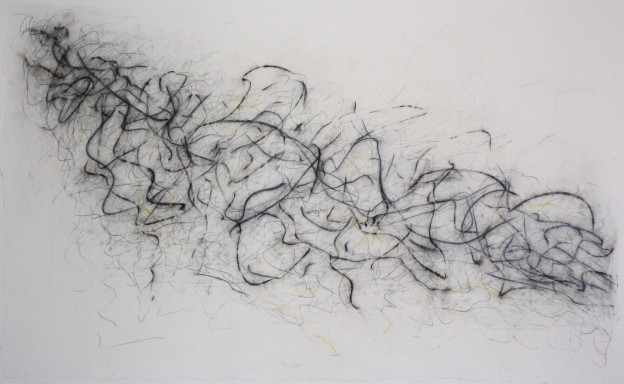 These drawings follow the free-flowing movement of the composer’s startlingly modern musical language, exploiting his combination of extraordinary freedom and discipline.  This discipline is just as crucial as it was in the Bach drawings, although expressed through different elements of my visual language. The mark-making functions as improvisation, but the marks are considered, the process rigorous, with a structure that allows me to retain control of the drawn response. The risk-taking inherent in drawing and in performing arouses profound emotions. The frisson of fear at the outset, the delight, the despair, the determination to continue, are a necessary part of achieving a resolved drawing, a satisfying performance. 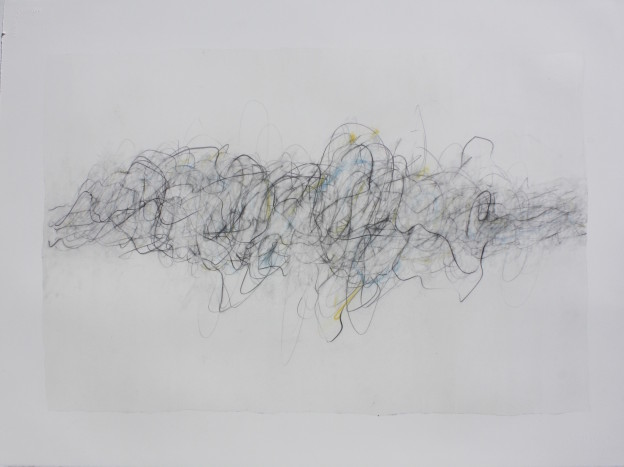 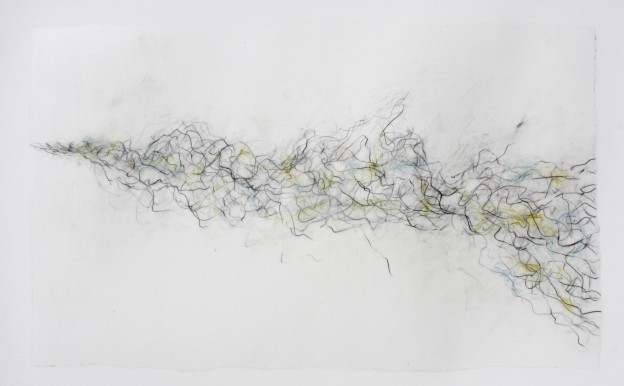 In the drawings of John Cage’s In a Landscape 1948 and in the Debussy series, the sound remains elusive, continuing to evade an attempt to make it visible. I draw on paper, a tangible surface, whereas music is disembodied. Both sets of drawings engage emotionally and intellectually with the music inevitably reflecting elements of their original sources of inspiration. 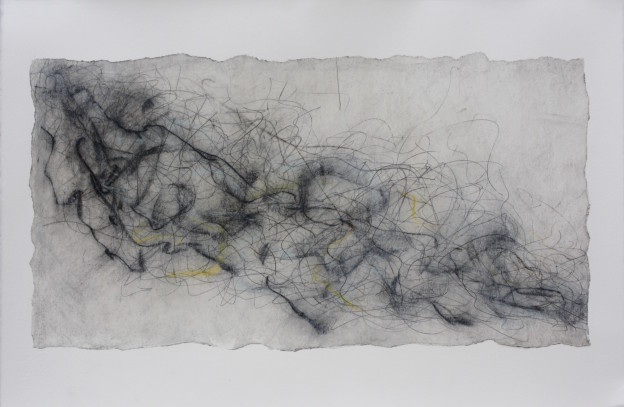 Once the final chord of a piece of music fades away what is left is the memory of that sound.  In my Bergamasque Suite and in the Bach Minuet 1 and 2 drawings I used erasure extensively.  To continue that process until the whole drawing disappears would seem to be a possible way forward in replicating the performance of a piece of music.  Such a process could be recorded just as sound is recorded.  Perhaps there would therefore be a correlation between making a film of drawings, like Snatched Moments and recording a piece of music. Whatever route I take, my drawings, represent a communication between composer and artist, a conversation between two practitioners, through the languages they use to express their ideas. Here is where the music and the drawing connect. 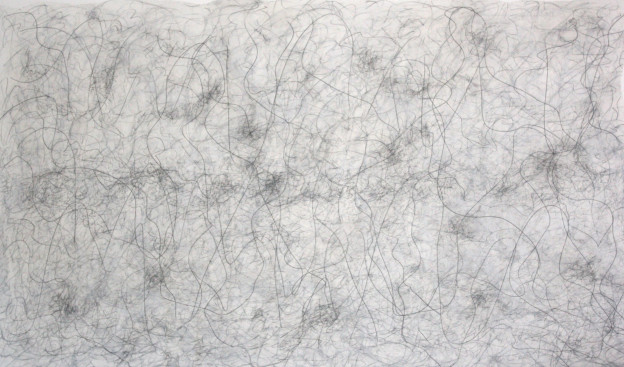 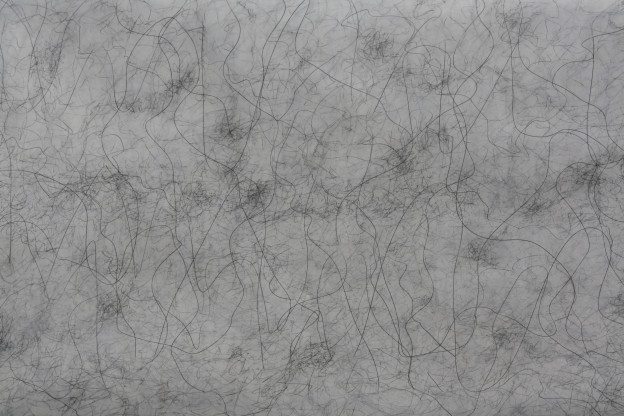 All images copyright and courtesy of Fiona Robinson

Fiona Robinson is an artist, writer and curator whose practice is primarily drawing-based. She exhibits widely and has been the recipient of various prizes including the Royal West of England Academy Drawing Prize, The University of Bath Painting Prize and the 4th International Biennial of Drawing, Melbourne Australia, Third prize. She curated the contemporary section of the recent exhibition Strange Worlds: The Vision of Angela Carter at the Royal West of England Academy in Bristol. She has written numerous exhibition catalogues and articles about artists as diverse as Rebecca Salter, Phyllida Barlow and Estonian American Drawing Performance artist Jaanika Peerna. Her current exhibition, Drawing Debussy is at the RWA from 1 March – 16 April 2016. View all posts with Fiona Robinson →