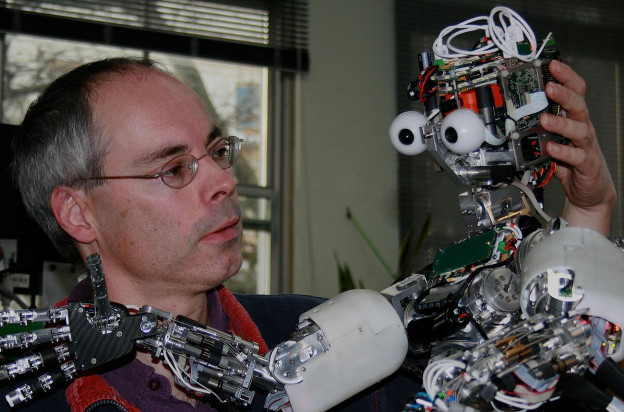 Richard Bright: To start off with, a brief question. How would you define intelligence from your standpoint?

Murray Shanahan: I think in the context of AI, we probably need to distinguish between “specialised intelligence” and “general intelligence”. General intelligence is the capacity to perform the kind of tasks that we as humans can perform, that we think demands the intellect. It’s the ability to perform a wide variety, and an open-ended variety of these tasks, and to adapt to new tasks and new situations.

RB: And artificial intelligence as you mentioned?

MS: Artificial intelligence is often defined as getting computers to perform tasks that if performed by humans we would say demand intelligence. That’s a bit circular, but it’s difficult to avoid the circularity really. I suppose that if one were to go into it in a little more depth, I would say that it’s good to relate it to tasks and behaviour. A task or a behaviour requires intelligence if it requires learning, or planning, or search, or some combination of those things.

RB: How are cognition and embodiment linked?

MS: That’s a very good question. Certainly the biological brain is there to help the animal to get around in the world, to find food and mates and to avoid predators and so on, to be able to manipulate objects in the world, to help in those things. Cognition has arisen in nature, in biology, in order to subserve movement, of different sorts. That is something that only really makes sense in the context of the body. It can be argued that cognition and intelligence are inherently something to do with embodiment, the ability to move around in the world, and even our highest intellectual achievements are in some sense grounded in our ability to manipulate a wide variety of objects in a complex world. It certainly seems to me that biological intelligence is grounded in embodiment. And so, if it comes to trying to build artificial intelligence, then that seems like a very good place to start.

RB: The embodiment could be within a computer, a robot? It needs a material?

RB: And, as you say, an important aspect of any artificial intelligence is that it needs embodiment.

MS: Well, I’m not sure that I’d go so far these days to say that it necessarily needs embodiment. We can build disembodied AI, for example, things like Siri and Google Now, these little personal assistants that are now getting very good at speech recognition. They are mostly pretty dumb in the way they answer questions, it’s just a kind of looking up things on the internet, but I think that will become increasingly sophisticated. So, that’s a kind of disembodied AI. Now, it’s not obvious that we’re going to get all the way to human-level AI, or artificial general intelligence in that kind of way. Maybe you need machine learning to build up knowledge and experience based on interaction with the world. On the other hand, there’s also so much data now available about interaction with the world, in the form of videos on the internet and pictures and text that can be analysed and learned from in a disembodied setting. It’s a kind of vicarious embodiment. So, a disembodied AI that has access to huge amounts of data like that can learn a great deal about interaction with the world from other people’s videos, from other people’s interactions with the world.

RB: Do you think artificial intelligence robots will attain at some point commonsense?

Murray Shanahan is Professor of Cognitive Robotics at Imperial College London. His current interests include brain connectivity, neurodynamics, comparative cognition, and the relationship between cognition and consciousness. His book "Embodiment and the Inner Life" was published by Oxford University Press in 2010, and he is currently working on a book about the technological singularity for MIT Press. View all posts with Murray Shanahan →