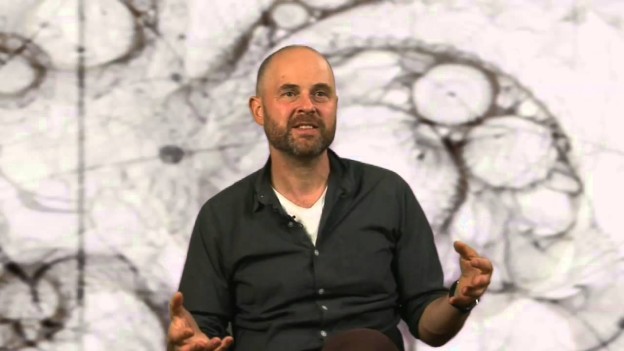 Richard Bright: Your latest book, Strange Tools: Art and Human Nature, makes the case for thinking of works of art as tools for investigating ourselves. How are works of art “strange tools”?

Alva Noe: There are two remarkable facts about art which, for all that they are remarkable, are completely uncontroversial and commonplace. The first is that artists make stuff, art is bound up with putting together, producing, building, manufacturing, whether it’s a poem or a staged production or play, or an installation or painting or sculpture, artists are constantly in the making business. Yet, and this is the second interesting fact, there are never any straightforward ways we can adequately evaluate works of art or do justice to whatever their claims of them are by simply accessing how effectively or how efficiently, how perfectly or how well they were made. In the case of art we can never take for granted what the function is according to which one would measure whether the instrument that was made served its function or not. That’s not to deny that many works of art do not, in fact, serve all sorts of functions. I assume, I could be wrong, but I assume for arguments sake that religious art in the Middle Ages served a didactic and instructional function, and maybe even a liturgical function. Likewise, I assume that when a great portrait painter such as Leonardo da Vinci made a painting of the Duke’s mistress, on contract from the Duke, he was meaning to make something like, in a very broad sense of instrument or tool, an instrument or tool for representing or depicting her and for allowing us to think about her or contemplate her in her absence, in a picture. Just as one might contemplate a pair of shoes that you might be thinking of buying through an online catalogue by looking at the picture. So, works of art may serve functions but I think it’s fair that we don’t evaluate whether a piece of art is successful by the same standards that we would use to decide whether the picture in an online catalogue is successful.

My explanation of that, in the first instance, with the catalogue we have a clear sense of what it’s for and what it’s trying to do, but when dealing with art all bets are off of what the presumed function is and therefore nothing can be taken for granted. Then there is a very interesting consequence, it means that works of art, which may be materially just like things that have this or that function, actually serve a different kind of function, meaning that of occasioning us to think about the ways in which we ordinarily take function for granted. Whether it’s the function of a picture or the function of any other kind of tool. I must say that I’m using ‘tool’ in a very broad sense as I finally want to encompass things such as language and other kinds of social practices and technologies. So my hypothesis is that works of art are not really tools at all, but they look like tools, or they’re tools that have been made strange, and in having been made strange in a sense can no longer play their function as tools as a straightforward application, but they exhibit something about the place of tools in our lives.

There’s a formulation of this idea that I actually came to only after writing the book, but I think it helps me get it, which is, artists don’t make ‘things’ because what they make is special. They make things because ‘making’ is special for us. By that I mean making special for us as human beings because doing, making, construction, tool using, skill based social practices, I would argue have a kind of defining role for what it is to be human. They help constitute us and make us what we are.

I want to kind you a very trivial example. If you were to come to my house after never been here before, you would take a look at the doorknob and turning it you would just pass right through into the threshold of the house. The doorknob is a practically transparent, self-evident piece of social gadgetry, but it only has the function that it has, given a lot of background facts of what it is to be human, it’s built to be used by people of roughly human size stature with roughly human shaped hands, who need to live in these kinds of dwellings to protect them from the weather or from other humans or from whatever it might be. You can imagine that an anthropologist from another planet would come here and wonder what this strange tool was. So what makes the doorknob transparent to us and self-evident, and why it doesn’t take a lot of brains to use a doorknob, is because the doorknob plays its role against the whole social context, and a biological context.

Now, imagine an artist would come along and obliterate that context, or take it away. Now you’re just left with an alien implement, or a ‘strange tool’. That implement, that tool, could now serve as calling to mind so much of what is actually concealed in the background of our normal life. To me that would be a way in which a work of art could actually unveil us to ourselves and reveal something profound about what it is to be human. So that’s why I call the book ‘Strange Tools’.

I should say that there is a little bit of a conceptual issue which is that, in a way what I’m really arguing is that works of art are not tools, they do whatever work they do precisely by imitating tools without really being tools. By my definition a strange tool is not a tool. A tool is only a tool when you can take its function and its background for granted.

RB: And the intentions and functions of artists are very wide, and ambiguous a lot of the time, maybe most of the time.

RB: In the book you argue how recent efforts to frame questions about art in terms of neuroscience (ie. neuroaesthetics) and evolutionary biology alone have been and will continue to be unsuccessful. Obviously there has been a great upsurge in interest and research into neuroaesthetics. What are the limits of these two disciplines in terms of their approach to art?

Alva Noë is a writer and a philosopher living in Berkeley and New York. He works on the nature of mind and human experience. He is the author of ‘Action in Perception’ (MIT Press, 2004); ‘Out of Our Heads’ (Farrar Straus and Giroux, 2009); and ‘Varieties of Presence’ (Harvard University Press, 2012). The central idea of these books is that consciousness is not something that happens inside us, or to us. It is something we do. Alva's new book on art and human nature, called ‘Strange Tools’, was released on September 15, 2015. Alva received his Ph.D. from Harvard in 1995 and is a professor of philosophy at the University of California, Berkeley, where he is also a member of the Institute for Cognitive and Brain Sciences and the Center for New Media. He previously was a Distinguished Professor of Philosophy at the Graduate Center of the City University of New York. He has been philosopher-in-residence with The Forsythe Company. Alva is a 2012 recipient of a Guggenheim fellowship and a former fellow of the Wissenschaftskolleg zu Berlin. He is a weekly contributor to National Public Radio's science blog 13.7: Cosmos and Culture. View all posts with Alva Noë →