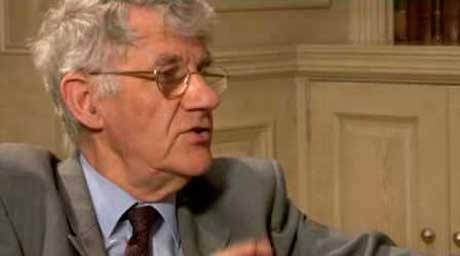 Richard Bright: Can we begin by you saying something about your background, work and research interests?

Basil Hiley:  My PhD was in condensed matter physics supervised by Cyril Domb at King’s College, London.  The topic I chose went under the general heading “The Statistical Mechanics of Interacting Systems”.  I considered two different systems, (i) the Ising model of a ferromagnet and (ii) the protein folding problem.  The latter was motivated by the recent work on DNA by Maurice Wilkins in the King’s physics department.  These two problems seem very different, but by assuming the protein can be modelled by an excluded volume random walk on a lattice, they could be treated by the same combinatorial techniques, namely, the evaluation of the number of certain finite graphs that can be embedded in regular tessellations.  By using different tessellations, we obtained results that were independent of the specific local structure of the tessellation.

However this topic was not something that I wanted to spend my research life on.  My interests from school had always been trying to understand quantum mechanics and relativity.  Indeed I was very frustrated that I could not generate interest in these topics in the physics department, but I stayed patient until I obtained my first degree, getting a first in the theoretical option of Special Physics.

I was then offered a PhD place under the supervision of Cyril Domb, which I took.  While I was doing my PhD, I used to take myself off to the maths department where Hermann Bondi had gathered around him fascinating group of people interested in general relativity and cosmology.  This was at the time the Bondi-Gold-Hoyle steady state theory was being challenged by new data coming from radio telescopes.  It was a very exciting time and that was the atmosphere in which I wanted to work.  However there arose an opportunity to work with David Bohm at Birkbeck College in the University of London and I took it.

RB: The term ‘holomovement’ is a key concept in both yours and David Bohm’s interpretation of quantum mechanics. Can you describe what you mean by holomovement?

BH: To explain the term ‘holomovement’, I must first explain the context in which David Bohm and I started our research collaboration at Birkbeck.  To me it was clear that in the attempt to understand quantum phenomena, we could no longer think of localised particles following well-defined trajectories in space-time. Something much more radical was needed.  When I first joined Birkbeck, Bohm had just been appointed to the chair of theoretical physics and Roger Penrose was in the mathematics department.  We would meet regularly for seminars, discussing the difficulties in trying to combine quantum mechanics with general relativity. Bohm felt that we needed a radically new description for quantum phenomena that involved a new notion of structure process.  We felt this approach was rich enough to capture Bohr’s notion of the indivisibility of the quantum of action, which implied that we could no longer make a sharp separation between the observing apparatus and the system we were observing.  In a sense, subject and object had become ‘fused’ to form a ‘whole’.   In Bohr’s own words:- “It is just arguments of this kind which recall the impossibility of subdividing quantum phenomena and reveal the ambiguity in ascribing customary physical attributes to atomic objects.” [Bohr, Atomic Physics and Human Knowledge, p. 51]

Roger Penrose was directly trying to quantise the gravitational field at the time.  He started by assuming that we would have to give up the notion of an a priori given space-time. At the time he was developing his spin-network approach, an approach in which the spinor, and later the twistor, was to play a basic role.  The spin network implied a kind of discrete structure with invariant properties of the type I had been exploring in my PhD thesis.

Now one of the problems in quantising general relativity is that the field equations involve the metric tensor, the tensor that defines the metric properties of space-time.  When a field is quantised, it becomes subject to fluctuations.  This leaves the basic question “What does it mean to have a fluctuating space-time?”  It was the answer to this question that led Penrose to give up on starting from a space-time manifold, and, instead, to begin from a deeper level that could be approximated at some level to the continuous space-time we observe in the classical world.

My PhD thesis had already taught me that we can go some way to model some features of the continuum by means of discrete structure, maybe by using some form of regular tessellation.  Better still, the structure of relationships could be modelled on an irregular network.  Then any quasi-local invariant features in this structure could be regarded as the ‘particles’ we experience in the atomic world.  In this way we could abstract not only what was meant by a particle, but also abstract out the space-time continuum.  Such a structure would then show how the behaviour of particles is constrained by the experimental environment in the way that Bohr describes.

At a conference, Antony Gormley, the artist-sculptor overheard David Peat and myself talking about these structural ideas and it caught his imagination; he therefore decided to construct a sculpture that would illustrate the type of idea that we were proposing.  His creative efforts led to “The Quantum Cloud”, a structure that stands on the South Bank of the river Thames near the Millennium Dome.  This structure is a beautiful metaphor that vividly captures the way we were thinking at the time.

However there is one problem with that metaphor, the structure is static!  What we really needed was to regard the metal struts of that sculpture to be the elements of a dynamical movement; not a movement of objects, but movement per se. Karl Pribram, an eminent neurosurgeon, suggested that we should not use the word ‘movement’ because it implies ‘something’ was moving from one end of the strut to the other, whereas no matter is moving.  He suggested we use the term ‘flux’, re-calling the spirit of Heraclitus. In the end we decided to use the term ‘structure process’. This fundamental process is not only structured by local relations, but, more importantly for quantum phenomena, by global constraints as well.  In this way we can account for the interconnectedness or ‘wholeness’ that Bohr saw as the essential feature of quantum phenomena.  This fundamental structure process was what we eventually called the ‘holomovement’ to emphasise the wholeness and the flux demanded by quantum phenomena.  Thus the holomovement became the ground of all being.

What I always felt was missing for a long time was a way to describe this structure in terms of some suitable mathematical form. This would allow us to convert our general notions into a language that would enable us to relate this structure to the mathematics we use in the standard quantum formalism but would not contain its paradoxes and puzzles.  Let me now try to indicate very briefly how some mathematics which is readily available is able to pin down these ideas.

If the underlying structure is process, flux, or merely activity, the order in which things unfold is vital. Action 1 followed by action 2 produces a result that is in general very different from action 2 followed by action 1. To illustrate this non-commutativity, try taking a cup out of a cupboard before opening the cupboard door!  So this ‘non-commutativity’ is basic in activity, while commutativity of ordinary numbers is a special case working well in classical physics. Thus if we construct any geometry out of the holomovement, it must contain non-commutative elements. Since we started this work, mathematicians have been developing what they call ‘non-commutative algebraic geometry’ and what one finds is that if we go deeply into this new mathematics, we find that the standard quantum formalism is but a fragment of this new geometry. This is not surprising because the mathematics was inspired by the standard quantum formalism. Within this structure one can see how the algebraic geometry of the classical world emerges. Thus we do not have two worlds as we seem to have now, a ‘weird’ quantum world and a ‘sane’ classical world. These emerge as just two aspects of one world.

RB: Your work with David Bohm also revealed a new form of energy, the quantum potential energy. How does this provide insights into the mind-matter relationship?

Basil J. Hiley is a British quantum physicist and Professor Emeritus of the University of London. He received the Majorana Prize "Best person in physics" in 2012. Long-time co-worker of David Bohm, Hiley is known for his work with Bohm on implicate orders and for his work on algebraic descriptions of quantum physics in terms of underlying symplectic and orthogonal Clifford algebras.[1] Hiley co-authored the book The Undivided Universe with David Bohm, which is considered the main reference for Bohm's interpretation of quantum theory. The work of Bohm and Hiley has been characterized as primarily addressing the question "whether we can have an adequate conception of the reality of a quantum system, be this causal or be it stochastic or be it of any other nature" and meeting the scientific challenge of providing a mathematical description of quantum systems that matches the idea of an implicate order. View all posts with Basil Hiley →