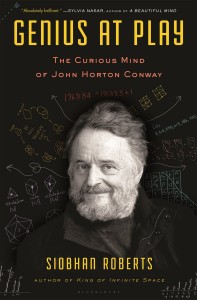 Genius at Play, The Curious Mind of John Horton Conway

Siobhan Roberts’ biography of Cambridge and Princeton mathematician John Horton Conway shows us his gleeful neighborhood: wives, children, siblings, Ph.D. students, girlfriends, collaborators from everywhere, math campers. But Mr. Rogers, Conway is not. He is, rather, a guilt and decorum free zone of eating (see: pie contest), drinking (see: pub), skirt-chasing (see: Moscow, California, etc.), storytelling and goofing off (see: every day); disconnected to duty, rules and regulations, or role model obligations. Conway is not your image of the shy mathematician looking at his shoes, more like a character out of Rabelais.

Yet, like her biography of Donald Coxeter, Roberts’ book triumphs in explaining the math, the wondrous and bountiful math, pouring from Conway’s mind. He visualized spheres touching in higher dimensions. In 24 dimensions that would be 196,560 spheres around each sphere. Number theory is arcane, but here is a series of regular fractions, and a simple rule, that amazingly spits out the infinite digits of pi. It is called Fractran, a pun on the programing language Fortran. Conway invented the Game of Life, known throughout the math, science, and computer worlds, that generated or augmented new disciplines, such as emergence, and many serious applications. Roberts recounts the trial-and-effort drudgery involved in the creation of a very simple (eventually computer) algorithm and an equally simple starting position. Conway invented a completely new way to define numbers, called the surreals – another pun, this time on the real numbers (the ones with decimals). The surreals define each number as the one between all the numbers before and all the numbers after it. One would not expect this new definition to rock the math world, but it did.

Conway also worked on a giant symmetry group called the Monster Group – I don’t understand it. Conway insists that since the Monster exists, nature must have some use for it. He pines to know that use. And Conway devoted years to his Free Will Theorem, which states that particles have free will if experimenters do. This version of the famous Einstein-Podolsky-Rosen thought experiment presents the central paradox of quantum physics in a particularly dramatic form. All Conway’s projects have collaborators that Roberts discusses fairly, but the reader gets the impression that Conway is the engine of creativity.

Siobhan Roberts writes in a colloquial style. In the middle of a precise and, frankly, borderline tedious passage, the author spritely jumps to our side of the page with “long story short,” and, dusting off her hands, finishes smartly. About the jet lag from a trip to Japan for a conference, she writes:

[Conway] seemed to have traveled via a VIP worm, depositing him halfway around the world entirely unfazed. His amanuensis, meanwhile, was flattened 1-dimensional by jet lag, drunk on GPS disorientation.

And the following picture of teenagers is unforgettable.

The Mathcampers shared the grounds with a cheerleading camp. The male-to-female ratio for the former was 5:1, for the latter 1:25. And while the socks-with-sandals Mathcampers might well have been conducting one of those no-soap bacteria-rich hygiene experiments, the cheerleaders blow-dried and beribboned their hair every day at 6:00 A.M., applied and reapplied moisturizer to their head-to-toe perfect tans, and bounded around campus wearing pom-pommed flip-flops and very short shorts (which eventually gave way to perfectly creased miniskirts). One might think it difficult for the young mathematicians to concentrate…

Siobhan Roberts has put herself in the book, and why not. She spent six years interviewing Conway (and everybody else). In all, she spent ten years thinking and writing about Conway. She is impressed; she is charmed; she is exasperated – and it is through her responses to Conway that he is brought to us. When writing about his illnesses and emotional vulnerabilities, Roberts is compassionate. She is generous in telling us the endorsements Conway gets from colleagues and rivals alike. Conway can be abrasive, and perhaps a whiff of poaching, and when they say he is an ass-hole, she uses that word.

In the end, the author and the reader come to view the subject much like a quarrelsome parent, superior, nudging, sometimes emotionally blank, but wanting the best from us, that we come to accept and love.