Richard Bright: Can we begin by you saying something about your backgrounds?

Ruth Jarman & Joe Gerhardt: We both studied fine art at Brighton University Art School, graduating in 1997. Our interests crossed over, particularly in sound, landscape and human experience, both making large architectural scale installations which included video and sound. We started by collaborating on sound projects, it was quite an organic process, first making a few things together which then developed into bringing sound and image together, we’ve now been collaborating for more than twenty years now. There wasn’t moving image as a genre then, so what we were doing didn’t have a clear home, we were in our own bubble, fervently experimenting for a few years, organising events bringing together artists and musicians. We were busy finding our own language and developing international communities, as there wasn’t a critical dialogue around the way we were working in the U.K. and it didn’t know what to do with us, also the artists we found an affinity with were international.

We started working together at the cusp of the first generation of current domestic computers and naturally started to explore its potential as an artistic medium. There were only a few visual software programmes available Photoshop 1, After Effects 1, 3DS MAX 1, we made what we call our process films, routes through the software or processes associated with the software which dissected them and revealed something about their make-up. This interrogation was part of the journey towards finding our own language using the computer as a medium.

With our CG animation works like 200 Nanowebbers (2005) and 20Hz (2010) we’ve always pushed the software until we reach what we want rather letting it be dictated by the software’s own aesthetic. You still see too many animated works which depend heavily on the existing aesthetic of the software rather than pushing its boundaries taking it somewhere else: as a painter you don’t use the paint straight out of the tube you mix it, explore techniques of applying it to find your own language, unless you are commenting on that. Our CG animations are very time intensive to make, we’ll always spend the same amount of time developing the technique as we do in making the work, it shouldn’t come too easy.

RJ & JG: One inspiration was the Land Art movement, this can be clearly seen in some of our early CG animations like LinEar (2001) and Inaudible Cities (2002), Walter De Marias Lightning Field literally comes to life in LinEar. CG animation gave us the ability to sculpt matter on the scale of landscapes, we bought time to it in the form of sound, this made sculptures moving in time.

At art school we also had an in-depth introduction to the history of experimental film making from a tutor Mick Hartney, artists who were interrogating the medium of film as an artistic material and simultaneously exploring ‘visual music’. This had a big influence on both how we approached our process films, directly manipulating zeros and ones to become sound and image simultaneously and also visual narrative techniques which manifest in works like A-Z of Noise (1999) and Brilliant Noise (2006).

RB: What is the origin and significance of your artists’ collective Semiconductor, which is a scientific term?

RJ & JG: The name Semiconductor came from our relationship with the computer. It acknowledged the role the computer was playing in our work at the time. Software comes with its own signature which we were constantly battling against whilst trying to form our own language. It would try to impose a distinct signature and we would spend a lot of time turning off the pre-sets, say in 3D software, which were programmed to make things ‘realistic ‘. So, it was a nod towards this, it semi-conducting the process. In some early works like Inaudible Cities (2002) we would give the computer some responsibility, choosing colours etc. a simplistic AI, or some of our process works like Yes You Are Right (1999) and Puffed Rice (2000) where the signature and material nature of the digital was the work. An acknowledgement of the computer’s role and signature in the work. As our practice developed and our own language took hold the relevance of our name has lessened in this way but has taken on a new emphasis as our interest in how science and technologies mediate our experiences of nature have evolved. It’s still very much about the signature of these devices. 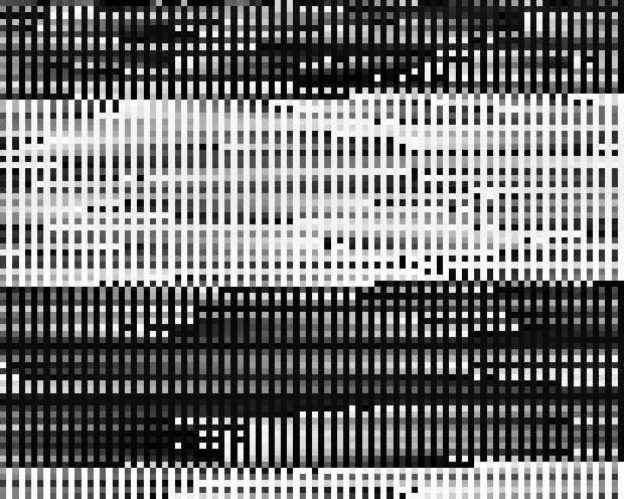 RJ & JG: Our starting point has always been about human experience of the natural world. As we became interested in matter and events that occur beyond the limits of our perception we turned to the tools and processes of science and technology, initially as a way to reveal these things to us. All the Time in the World (2005).  As we did this, we came to realise there was always the presence of a scientific or technological signature, and we started to embrace this more as a way to question how science mediates our experiences of physical matter. We often refer to our large-scale immersive works as a “technological sublime”, a way of experiencing nature that is mediated through the languages of science and technology.

During a residency at a NASA Space Sciences Laboratory at UC Berkeley in 2005, Janet Luhmann a solar physicist said to us, “you know science is a human invention it’s nature that’s real”. We felt this gave us a licence to start asking more philosophical questions of science and through this endeavour explore humankinds place in nature. Within this framework we have engaged with ideas around simulation: Parting the Waves (2017), scientific method: The View from Nowhere (2018), phenomenology: Earthworks (2016), scientific language: Magnetic Movie (2007), and objectivity. 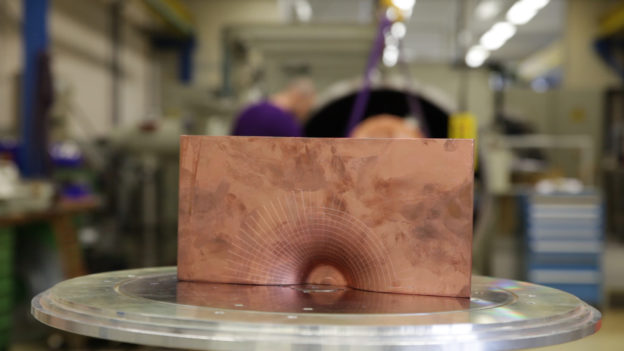 Although our works are observations of physical matter seen through the tools or processes developed through science and technology, the work is about humankind and how we perceive the world around us. These works are functioning at the boundaries of what we can physically experience whether its what we see, hear, how we experience time, our physical scale in relation to matter on massive and minute scales: we’re always working from these markers. In this sense the works are an experience, a journey you are taken on, we describe them as transcending the science or technology to become a phenomenon in their own right. People will often spend time bathing in our installation works, immersing themselves.

The signature of the science or technologies we work with has increasingly had an important presence in our work. We embrace the errors, noise or artefacts which are an ordinary part of the capturing process as a way to remind us of the presence of a human observer. They also tell more of the story of the capturing process enabling the viewer to position themselves in relation to the matter. For example, in Brilliant Noise (2006) we have worked with the raw data, this means getting the image data as it is first captured by the technology rather than when it has been processed to remove the noisy signals or had scientific interpretations applied to it in the form of colour or turned into mosaics for public consumption. The raw data has waves of visual noise which are cosmic rays hitting the cc’d of the camera, light flares and clunky motion due to the time-lapse nature.

A similar work we made using raw data called Black Rain (2009), working with data from an instrument called the Heliospheric Imager which looks at the space between the Sun and Earth, was used in the BBC science documentary Wonders of the Solar System, since then it has been more commonplace to see documentaries exploring these techniques to present scientific data, and as a result this method is now more familiar. Similarly, we will often employ the framework of the technology used to suggest mans presence in the observation process. HALO (2018), for example, physically uses a simplified form of the ATLAS experiment to house the viewer in, while Catching the Light (2014) uses the viewing patterns of the Hubble Space Telescope to provide windows into the universe. These are the signatures of man that come with the way we experience matter beyond the limits of our perceptions. 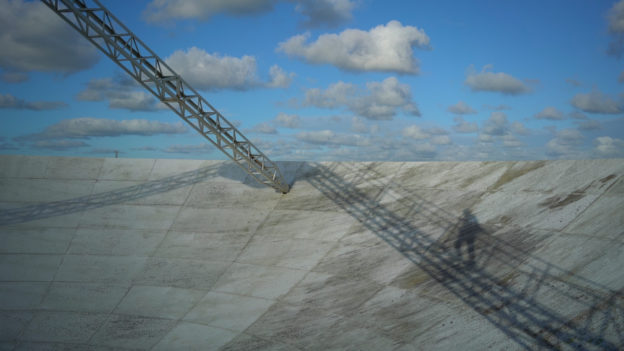 As the World Turns (2018) 13.29 single channel. A Semiconductor work by Ruth Jarman and Joe Gerhardt.

RB: Your work As the World Turns (2018) is a moving image science fiction, which explores man’s place in time and space through the science of radio astronomy. Can you say more about this work?

Semiconductor is UK artist duo Ruth Jarman and Joe Gerhardt. In their art works they explore the material nature of our world and how we experience it through the lens of science and technology, questioning how they mediate our experiences. Their unique approach has been singled out for recognition with numerous honours and grants including SónarPLANTA 2016 commission, Collide @ CERN Ars Electronica Award 2015, Samsung Art + Prize for New Media, a Smithsonian Artist Research Fellowship, a NASA Space Sciences Fellowship and were recipients of a Jerwood Open Forest commission. They have exhibited and screened their works at the House of Electronic Arts in Basel, FACT in Liverpool, the ArtScience Museum in Singapore, the San Francisco Museum of Modern Art, Royal Academy of Arts in London, the Sundance Film Festival in Utah and at the International Film Festival Rotterdam. Their works “Magnetic Movie” and “Brilliant Noise” are in the permanent collection of the Hirshhorn Museum in Washington DC and the Centre Pompidou in Paris. View all posts with Semiconductor →