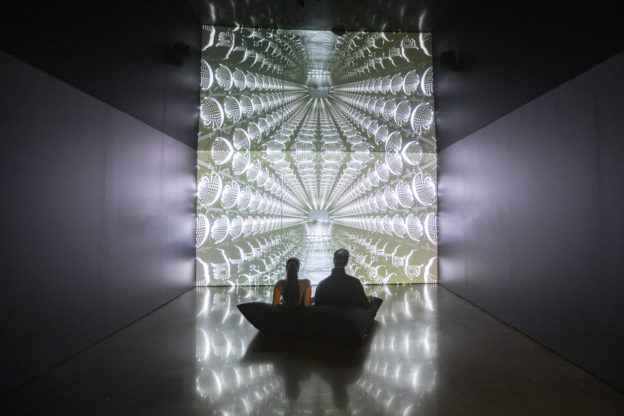 One of the biggest mysteries in physics today is what exactly makes up our Universe, and why – according to the world’s leading scientists – 95 per cent of it cannot be observed.

From 6 June – 26 August 2019, Science Gallery London will explore the elusive building blocks of the Universe with DARK MATTER, a free exhibition and events season combining art, physics and philosophy, and drawing on the latest research from the Faculty of Natural & Mathematical Sciences at King’s College London.

Normal matter – everything that we can see and observe – makes up just 5 per cent of the Universe. The rest, including dark matter and dark energy, is an unknown which scientists have been hunting for nearly a century.

As scientists approach the limits of what can be observed or known within theoretical physics, DARK MATTER at Science Gallery London highlights the critical role of artists, philosophers and storytellers in our understanding of reality.

Imagining the unseen and questioning the invisible, the new season will explore fundamental physics, matter and materiality, the concept of invisibility and infinite divisibility, and the human quest for absolute truth and knowledge.

A range of free events will accompany the DARK MATTER exhibition including Friday Lates, performances and workshops shaped by Science Gallery’s Young Leaders – 15-25 year olds who live, work or study at King’s or in the neighbouring boroughs of Southwark and Lambeth. 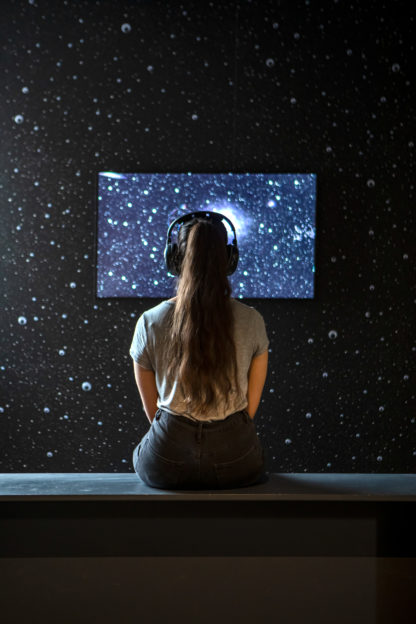 Season advisor Malcolm Fairbairn, Professor of Physics at King’s College London said: “Dark matter is passing unimpeded through each of us constantly and acts as a cosmic support for galaxies in the Universe, including the one we call home. Despite this we cannot see it or touch it. This season aims to investigate this contradiction, exploring not only dark matter itself but also questions of how science aims to explain reality.”

Munira Mirza, Executive Director for Culture at King’s College London said: “Science Gallery London is a place to encounter the unexpected, so it is the ideal space to explore one of the most fundamental mysteries of the Universe. We are delighted to present the third season in the Gallery, DARK MATTER, which showcases thought-provoking research from King’s College London, alongside creative responses from international artists and the Gallery’s Young Leaders.”

John O’Shea, Head of Programming at Science Gallery London said: “Scientists’ ongoing quest to understand dark matter is a lens through which to think about the human desire to reveal the unknown. The DARK MATTER season brings together scientific research, artistic expression, storytelling and philosophy to communicate and explore the limits of human knowledge and our fascination with the unknown.” 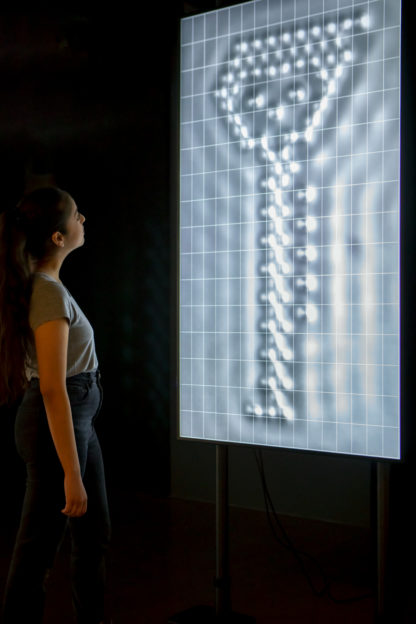 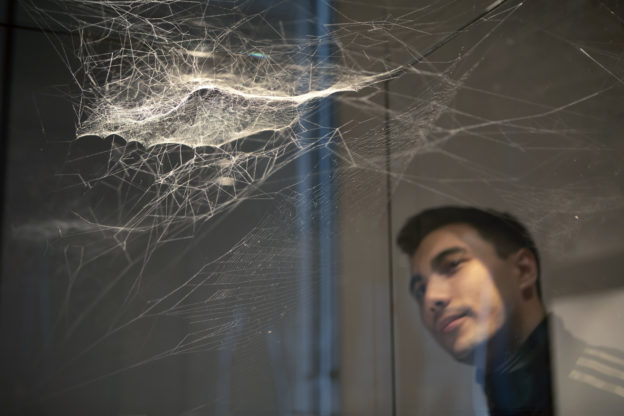 Dark Matter Radio by Aura Satz is a new all-encompassing sound work translating dark matter simulations into sound patterns, in collaboration with Professor Malcolm Fairbairn from the Department of Physics at King’s.

Developed with Professor Malcolm Fairbairn from the Department of Physics at King’s College London, Missing Mass by visual artist Carey Young gives sculptural form to 7142 particles of the hypothetical dark matter which are believed to regulate the mass of the Universe, posing the question, who can own dark matter?

An immersive new installation by Andy Holden reflects on the physics of a cartoon environment which defy the normal conditions of gravity, force, and velocity. The animation has been developed through conversations with physicist Professor John Ellis, formerly of CERN and now Clerk Maxwell Professor of Theoretical Physics at King’s College London.

Drawing on her residency at CERN and conversations with physicists at King’s, Yu-Chen Wang’s new large-scale intricate drawing will explore the concepts of dark matter and how knowledge is created.

Higgs, Looking for the Anti-Motti is a film by Geneva-based artist Gianni Motti in which he imagines himself as a proton, circulating the 27km of the CERN research centre on foot. It took him about six hours – in contrast, the particles studied at CERN could make the trip 11,000 times in a second.

Artists Nina Canell and Robin Watkins present Of Air, a tightly sealed glass jar containing 3800ml of air from the St Petersburg study of Dmitri Mendeleev, the scientist credited with creating the Periodic Table in the late 1860s.

Working with the European Space Agency, astrophysicist Gabi Matzeu and composer Tristan Shorr, filmmaker and visual artist Emilija Škarnulytė presents Mirror Matter, a hypnotic journey into the world of the imperceivable, including a soundscape of black hole emissions, gravitational waves and particle collisions.

Through the AEgIS, a film by UK duo Semiconductor looks at how antimatter responds to gravity captured by the AEgIS experiment at CERN. Flying pions, protons and nuclear fragments ionize on a photographic plate which, when developed, reveals their trajectories as different sized tracks.

A newly-commissioned work by sculptor Steven Claydon will include sound samples of atoms moving and footage from A Boy and his Atom – a stop-motion animation created by IBM, made by moving carbon monoxide molecules, with each molecule magnified 100 million times.

Photography by Enrico Sacchetti depicts the chamber of the XENON1T, the largest dark matter detector in the world, located below a mountain in the Gran Sasso Laboratory in central Italy.

Science Gallery London is a space where art and science collide. It connects art, science and health to drive innovation in the heart of London. A flagship project for King’s College London, Science Gallery focuses on engaging 15 to 25-year-olds in cutting-edge research on science, art and design. Through exhibitions and events, Science Gallery London brings together scientists, artists, students and local communities in new and innovative ways to stimulate fresh thinking.

Science Gallery London is based in a renovated Georgian building on the King’s College London Guy’s Campus opposite The Shard in London Bridge. Its programme features three themed seasons each year, incorporating exhibitions, events, performances, live experiments, open discussions and festivals – all with scientific engagement at their core. Science Gallery London delivers King’s College London’s Vision 2029 by connecting art, science and health to drive innovation in the heart of the city. With King’s research at the core of the programme and through innovative collaborations across London, Science Gallery London enhances the experience of King’s academics, students, visitors and local communities.

Since our foundation, King’s students and staff have dedicated themselves in the service of society. King’s will continue to focus on world-leading education, research and service, and will have an increasingly proactive role to play in a more interconnected, complex world. World-changing ideas. Life-changing impact: www.kcl.ac.uk/news

To reflect Science Gallery London’s aspiration to act as a catalyst for creative collaborations in art and science, the gallery draws on the expertise of a group of people whose expertise and individual artistic or scientific perspectives are pertinent to each season. These advisors help Science Gallery London shape the content and direction of the season so that it becomes something that has credence in their respective worlds.

The advisors for DARK MATTER are:

Sandra Ross is a curator and producer with an active interest in interdisciplinary artistic practices that examine the connections, overlaps and divergences between science, art, philosophy and culture. She has worked as a curator at The Arts Catalyst and the Pump House Gallery, where she later became the Director. In 2011 Sandra co-founded the experimental space The Hidden Noise in Glasgow and has also curated and produced exhibitions, events programmes and festivals for the British Council, Film London, and the Science Museum’s exhibition Cosmonauts.

At the vanguard of the STEM to STEAM movement, Science Gallery International is leading the creation of the world’s first university-led network dedicated to public engagement with science and art, igniting the creative potential of young people globally to tackle the world’s biggest challenges.