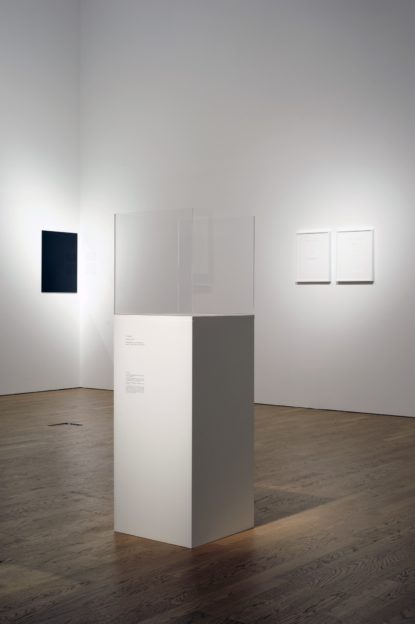 Missing Mass (2010) is a sculptural work created with the scientific guidance of Prof. Malcolm Fairbairn, an astrophysicist based at King’s College London. The piece ‘presents’ a specific number of dark matter particles alongside a legal disclaimer which proposes the particles as the only truly free entities in existence. The work centres on the idea of artistic freedom, suggesting that if dark matter particles are the only free entities in existence, by implication, art, the artist, and any other societal or cultural element held to be symbolic of freedom, are merely constrained, whether by gravity, bureaucracy, institutional ties, etc. The work also proposes links between sculptural works associated with Minimalism and Conceptual Art (such as the early work of Hans Haacke) and contemporary developments in astrophysics.

The work was developed through a research process which involved regular meetings with Dr. Fairbairn, plus an astrophysics reading list, which necessitated five months of study. From this process I derived the idea for the work, as well as others including Terminal Velocity. 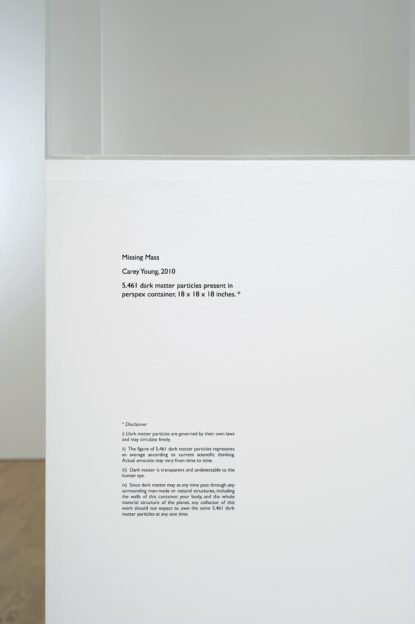 The text on the plinth says: 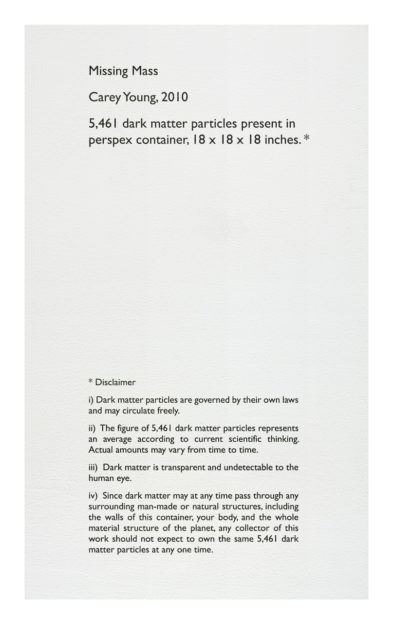 Since 2003, visual artist Carey Young has developed a number of artworks that are also functional legal instruments, and which have conceptualised and explored law as an artistic medium. Young collaborates with legal advisors to make artworks in installation, video, performance, print, sculpture and photography, which have been exhibited internationally. These works have embodied such diverse forms as contracts, disclaimers, offers, licenses, cautionary statements and a will, and addressed disparate legal fields including human rights, inheritance law, intellectual property and law relating to outer space. Experimenting with ideas of time, space and physicality, Young’s body of artistic work explores law as a separate kind of ‘reality’, one with its own inherent subjectivities and points of breakdown.