With the last series I presented within these pages, titled HumanScapes and Microbiota’s Song, I aimed to present our body from our microbiota’s perspective (the sum of microorganisms inhabiting the human body). Through this nonhuman point of view, I investigated our relationship with nature, advocating our own “naturalness”.

While I still stand by that research, I eventually came to realize that nonhuman perspectives, created for humans and with a human’s help, had its limits; even with the best of intentions, I could never completely escape my own anthropocentric biases. Why? Well, simply because I am a human, and that as such, my only way to grasp the environment is through my own senses, my own interpretation. A completely nonhuman approach could only emerge from nonhuman entities. Pushing these reflections even further, I came to understand that the only way to get a genuine perspective of the Other’s world would be to be the Other. Sadly, since we currently do not posses the tools to swap body and, very importantly, cognition, I had to revise my approach.

Combined with a strong feeling that our relationship to our own microbiota ran deeper than “microbes inhabiting a body”, this rethinking led me to a dual frame of reference, where I embraced the idea of co-creation as a meaningful encounter, both visually and conceptually. Indeed, to explore the human as a multi-species hybrid, what better way than to merge both human and non-human perspectives into a single artwork?

These reflections led to my latest series, Hybridities: Almost Other, where, through our microbiota, I explore our skin as neither an isolation wall nor a frontier of the self, but as a permeable, fluctuating zone. To challenge our current understanding of humanness, these artworks present portraits of individuals having their physical borders and identity literally dissolved under the action of our own invisible ecosystem. Indeed, these artworks are grown in Petri dishes, with the help of microorganisms taken from my subjects’ faces, to create “multispecies self-portraits”. To achieve this, I developed a process where I transform photographic film, featuring portraits, into a growth media for microorganisms. Through their own agencies, these microorganisms then push around the inks contained in the film, adding a new layer to our understanding of humanness and highlighting our hybrid state, both human and microbial, macro and micro, individual and ecosystem. 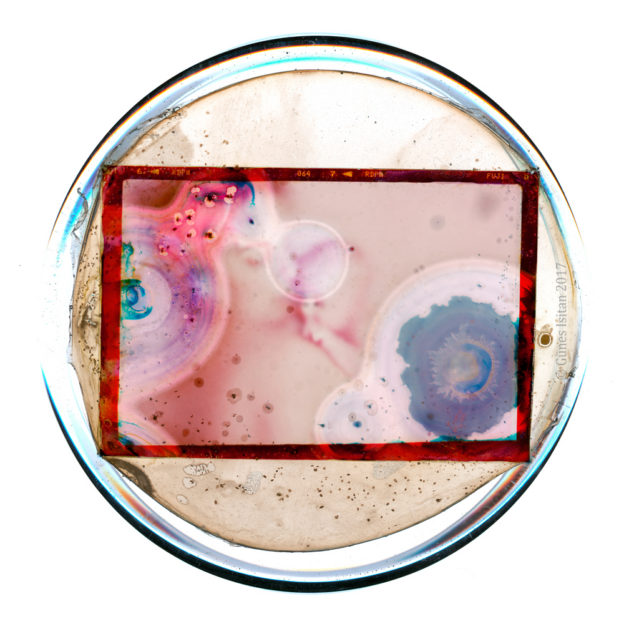 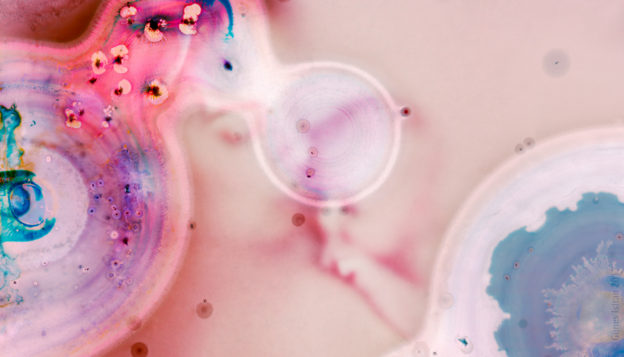 Just as our skin isn’t a limit, a border, but an ever-changing permeable zone, so are the resulting artworks: in constant transition, evolving throughout every exhibition.

Hybridities: Almost Other is also meant to be a philosophical endeavour as much as an artistic one, as it seeks to open a critical dialogue about human nature. Here, I present a humanity whose existence is a multispecies creation; indeed, we are alive through the action of billions of relationships that transcend the transient boundaries of what is commonly understood as the self. This new perspective negates the humanist view of the human as a free, autonomous agents: suddenly, we do not exist alone in a vacuum, but rather, we realize that human and non-human existences are constitutively engendered and depend on each other.  And this is, to me, the main idea of Hybridities: Almost Other: being a hybrid, the non-human is not located “out there”, in the distance; as a result of co-evolution, it is part of who we are. 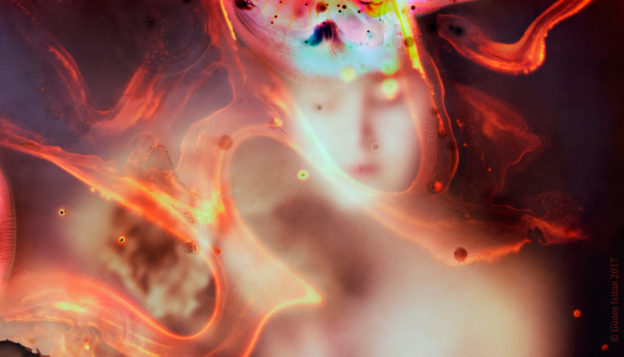 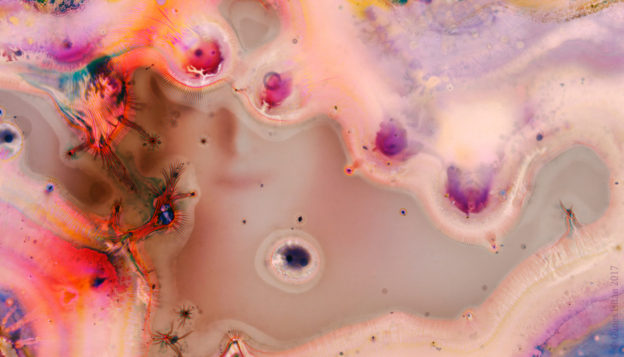 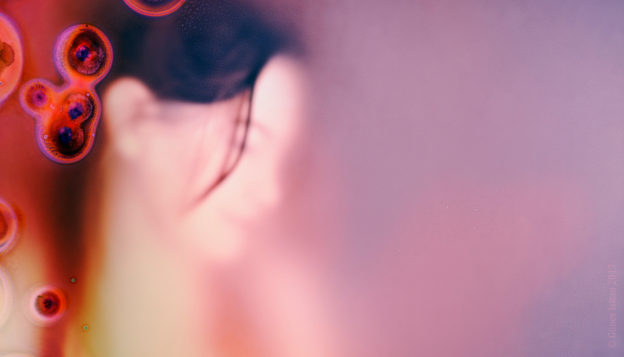 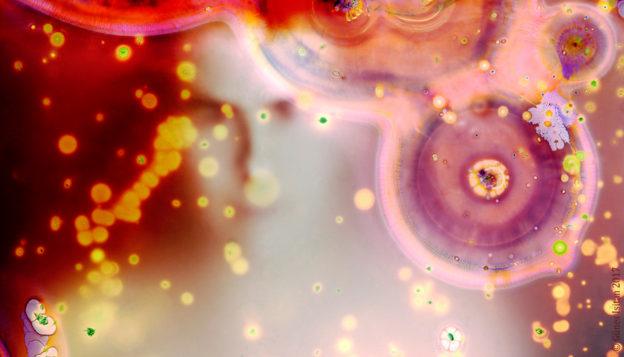 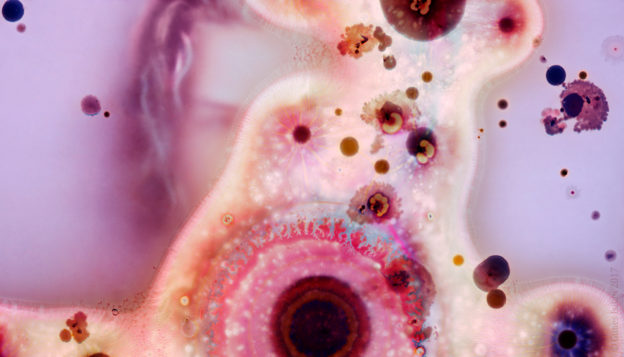 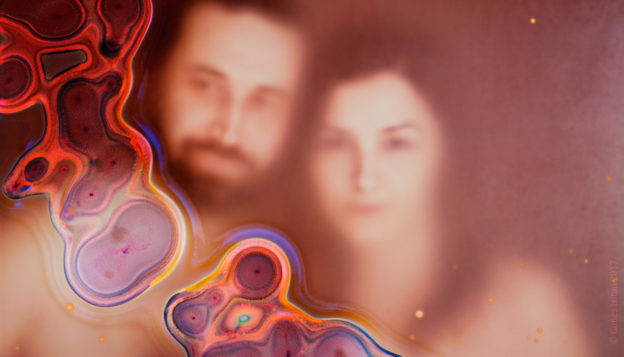 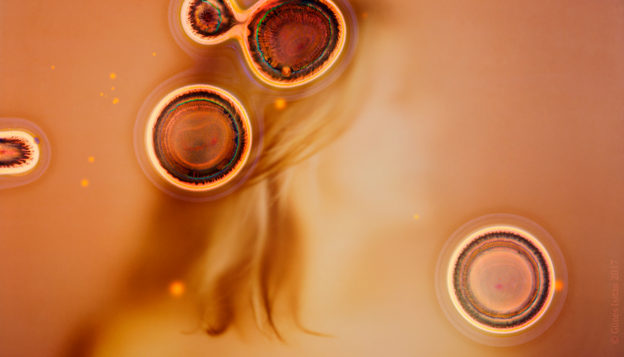 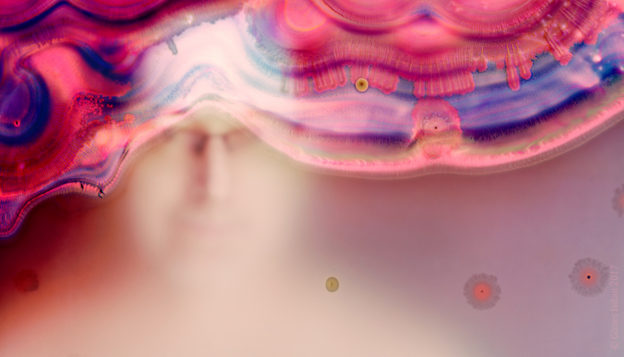 Reality is composed of worlds connected to other worlds, each one of them being a Mobius strip.

Human perspective just happens to be one of them.

Merging media arts with biology and posthumanist philosophy, my art encourage a rethinking of what it means to be human beyond anthropocentrism. Exploring the cultural barriers we build in the life continuum, it questions human nature by revealing the interdependency relations and co-becoming fates from which our world emerges.

Created in a laboratory using methods borrowed from microbiology and electronics, my works present realities that, although undoubtedly ours, are located beyond our five senses. They set forth an embodied humanity, whose skin is neither a container nor limit, but a permeable multispecies zone; a humanity who, by relinquishing its exceptionalism claim, no longer appear in isolation, looking at nature from above, but is rather revealed as thoroughly entangled with it.

Transdisciplinary by nature, my practice deepens these posthumanist inquiries through visual pieces and living, interactive installations. Structured around the ideas of “embodied entities” in relation with their environment, my practice thus crystallises those transient, fleeting moments of human and non-human realities in co-becoming.

'Reality is composed of worlds connected to other worlds, each one of them being a Mobius strip. Human perspective just happens to be one of them.'-------------------------Günes-Hélène Isitan is a professional transdisciplinary artist; her practice, anchored in biomedia arts, is an interweaving of visual and interactive art, life sciences and philosophy. Inspired by contemporary issues, she uses microorganisms to explore the cultural barriers humans have built in the life continuum, questioning the Nature/Culture dichotomy and offering a new perspective on our relationship to non-human agents. Through her visual pieces and her installations, she strives to offer an experience of different relations to the worlds, where the body-subject is neither isolation nor limit, but a permeable zone, open and ready to affect and be affected by the interactions with the non-human, the more-than-human. Her works are presented in solo and group shows in artist centers and galleries across Canada, in the US and in Europe, including the New York Hall of Science (NY, USA), the Centre d'exposition de Val d'Or (Qc., Ca) and Sporobole Artist Center (Qc., Ca.). They also have been featured in art and science books & magazines, and are part of private collections. Her formal education includes undergraduate studies in photography and intermedia art at Concordia University and graduate studies in Actual Arts Practice at Sherbrooke University. She recently received a research and creation grant form the Quebec Arts Council for her next series, Hybridity: Almost Other and is represented by Galerie uNo in Quebec City (Canada). www.gunesisitan.com View all posts with Günes-Hélène Isitan →