While attending grad school at NYU, I also took piano classes. I loved learning Baroque pieces from JS Bach, Henry Purcell, and Domenico Scarlatti. When the pieces were originally composed, the piano didn’t exist yet, and they were primarily written for a harpsichord which doesn’t allow for much tonality

There is something very fascinating to me about playing pieces that were originally written for a different instrument, and now they are mostly being played on the piano that allowed for endless expression and interpretation from pianists throughout history. Because the pieces I was studying were written for a harpsichord, my piano teacher loved to discuss how we wanted to play the notes. She would show me how a pianist played the piece this way, and another person played the same piece this other way, or how one way of playing the piece became popular because of this and that. Personally, I was really drawn to Glenn Gould’s minimal and intricate approach. For me, his playing felt mathematical.

At the same time, I was taking classes on Algorithm Research and Data Visualizations. The piano lessons inspired me to form my thesis topic on visualizing parametric equations: based on the same music notes, piano as a modern instrument introduces a space that welcomes more sound movements. Much like the piano, I wanted to explore how computation can bring dynamic movements to parametric equations.

My first test was to program a cardioid curve, and then add additional parameters into its equation such as time, movement of its radius, and some physics-based particle attractions.

The above simulation was meant to be an experiment, like throwing a computation structure into an equation and watching how it reacts. After that, I targeted a few parameters to continue testing, and I computed this simulation that visualizes the sound based on cardioid equation.

After grad school, I spent more time experimenting with the artistic outcome of my research. I finally produced many wood block prints to capture the notes of those visualized forms. For me, they are like a photograph of dance moments—you can feel the motion, but the image is still and silent. They have been exhibited in US, China, and Canada. 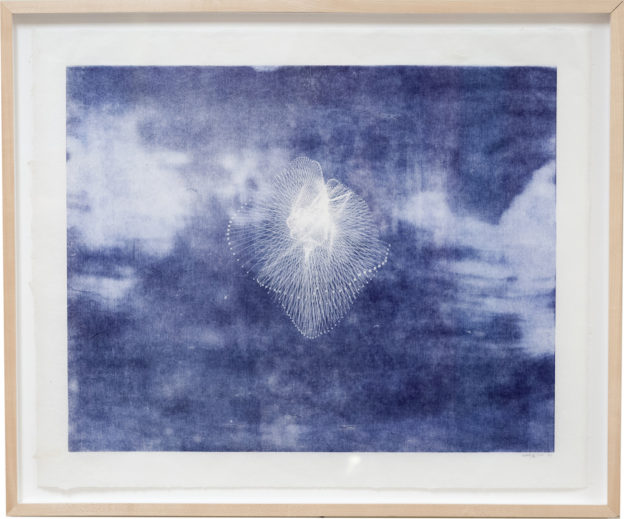 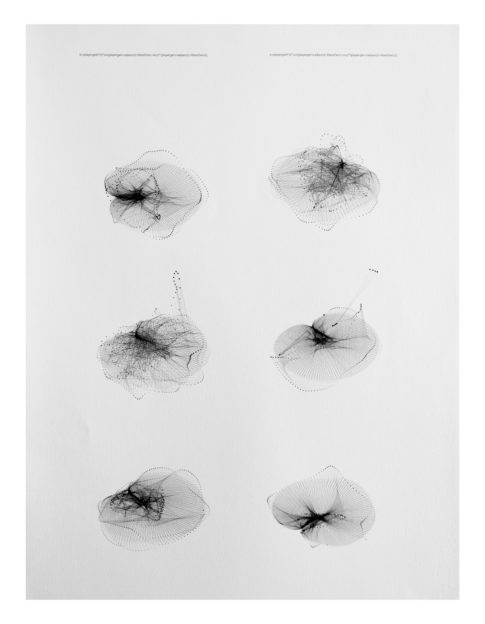 All images copyright and courtesy of Guang Zhu

Guang Zhu lives in Brooklyn, New York. She grew up in Northern China, NingXia, an Arabic culture influenced cityscape. She has endless passion for art, music, and computer science. She received a BFA from the Nova Scotia College of Art and Design in Canada, and a Masters from NYU. Prior to moving to New York in 2010, she received two art scholarships in Canada. Her art paper, Reasonless Math and Parametric Courant, have been published and presented in academic conferences. Her Masters thesis, “An Aquarium of Equations”, received a grant from the Lower Manhattan Culture Council in 2013. Since then, she continuously exhibits in the U.S. and China. View all posts with Guang Zhu →