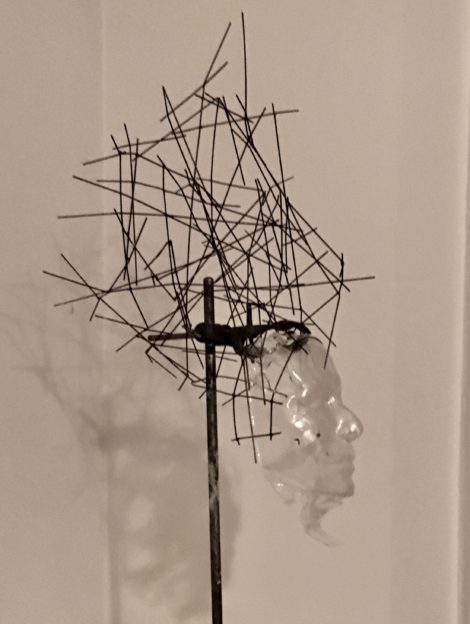 The themes of repressive Dystopian social control systems, our increasing lack of interaction with nature and each other, and the antithesis in a possible Utopian future, inspires my work. 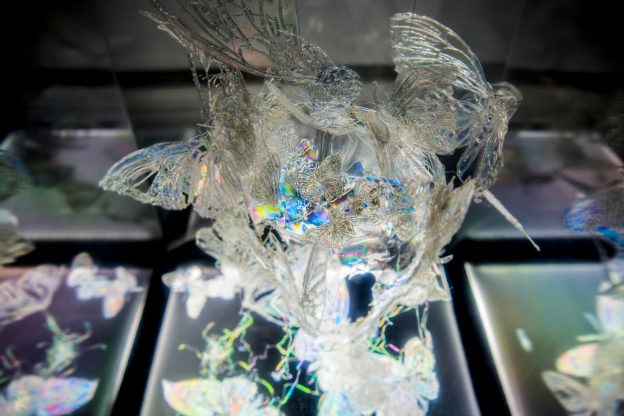 The influence of technology on the human mind, bounded by the metal and glass lit cages of our mobile devices, continues to be pervasive but I believe Artists can provide a narrative to the history of technology and its ethical consequence. A narrative that is needed more than ever now in Society. 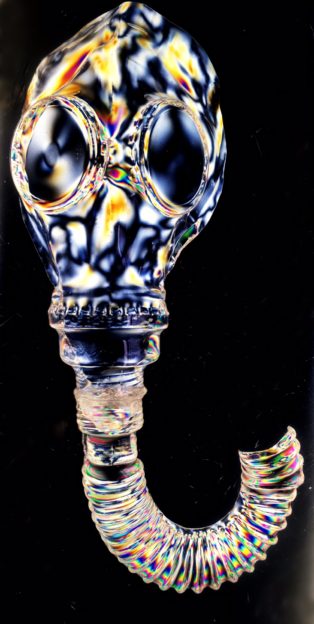 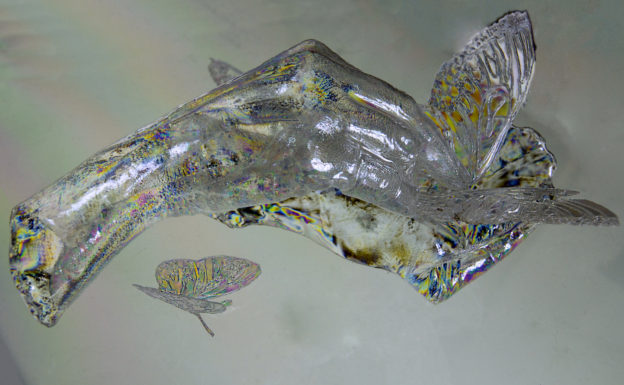 Portrayed in film and literature in everything from Brave New World by Huxley to the Wachowskis’ Matrix, in which bio-engineering replaces evolution, or the approaching 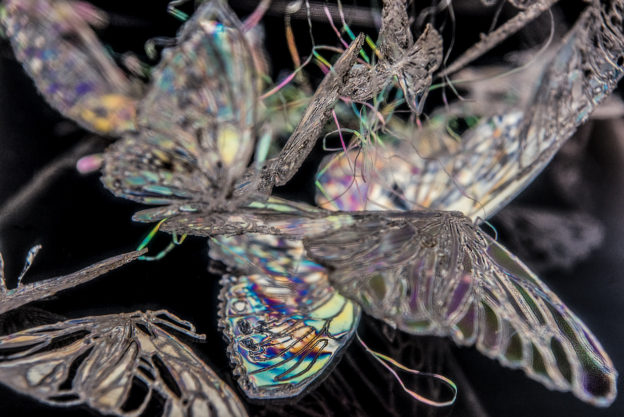 singularity in which computers overtake humans in a post-apocalyptic world, elicits both fascination and fear. 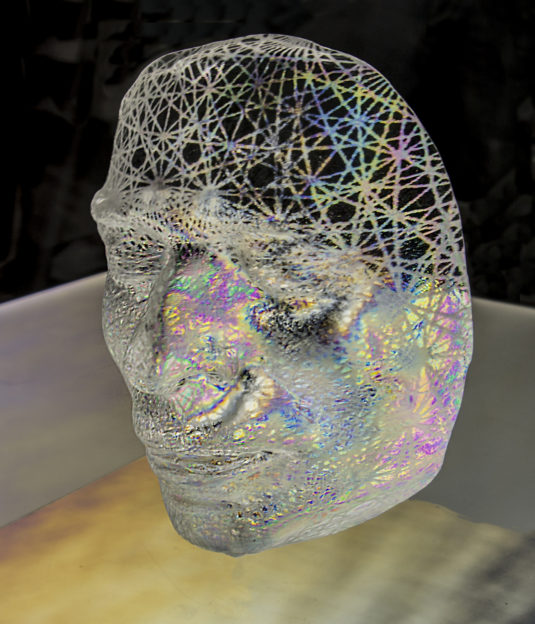 The advent of AI, increased automation, bio engineering, overpopulation and climate change, suggests it is not a matter of if, but when, but I believe that, far from being a day or apprehension, this could be a moment of supreme human evolution. As we are freed from the tyranny of work left over from the Industrial revolution, we will have the freedom, through global and machine interconnection and new ways to heal, to re-educate ourselves and attain the highest level in Maslow’s Pyramid of needs-Transcendence. Perhaps it is by becoming one with ‘the machine’ that we will achieve this and at long last reverse the damage to our planet home. 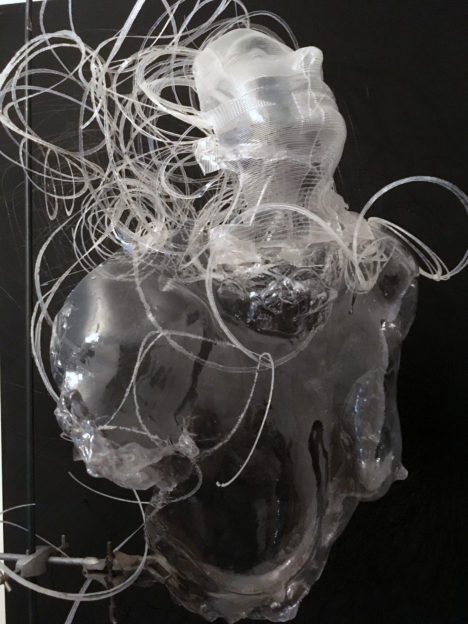 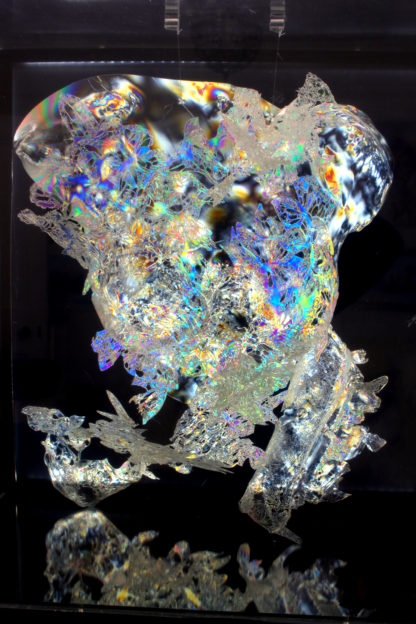 We have recently found that the human mind works outside our realm of understanding in 11 dimensions, impossible to understand when we live in a 3-dimensional world but perhaps the key is intuition and our ability to use our opposable thumbs in what I call ‘thinking with hands’; the evolutionary trait that allowed us to develop the sapient mind. And after years of academic rigor in both science and art, I find it is now intuition that feeds my work. The connections I make only becoming clear in retrospect, but I can now see, that I have been searching for a ‘Brave New World Aesthetic’ in which the old we are familiar with, co-exists with the new and both are in resonance with that which is human; empathy and compassion. 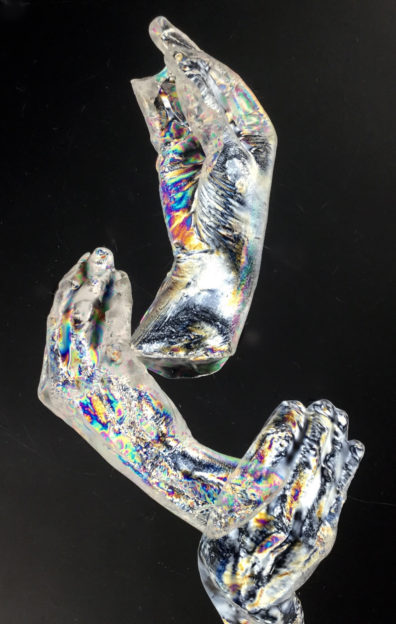 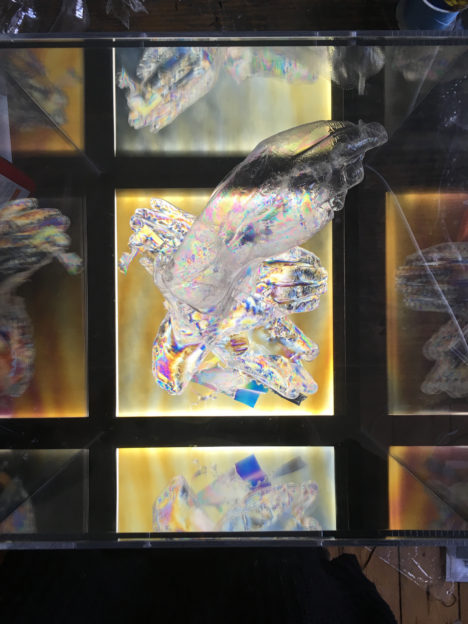 My medium is light which once I explored as a painter, but have since turned to the pure light of my physics research, taking plastics, some of the very plastics which are so suffocating our planet, to create sculptures that change colour with movement. Called ‘holograms you can touch’ or Quantum sculptures, they rely on the presence of the observer to change. I see myself as a painter who sculpts with colour, constantly experimenting with new media to add to the story.

And my visual narrative will take you through Dystopian images of skulls and gas masks decorated with butterflies to represent transformation, through to the light portraits of the future thinkers and innovators who are shaping a Utopian world of plastic trees living alongside real ones in an effort to counteract our global warming, to hands that are held in unison as they reach for enlightenment. 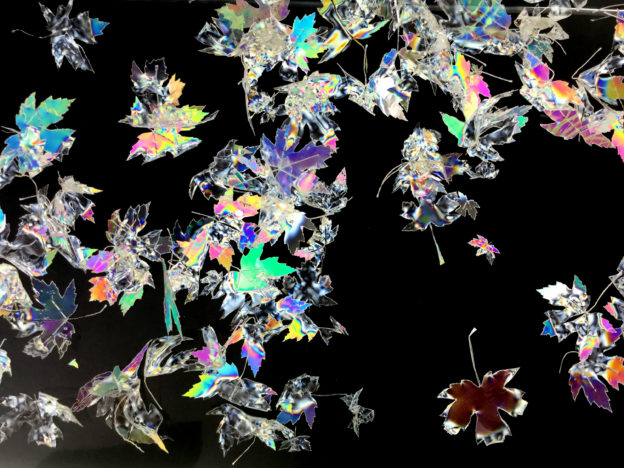 Detail of Resonance in leaves; an Interactive, colour changing Installation of thousands of leaves 2017

And eventually to the colourless free floating human forms representing breathe and freedom. 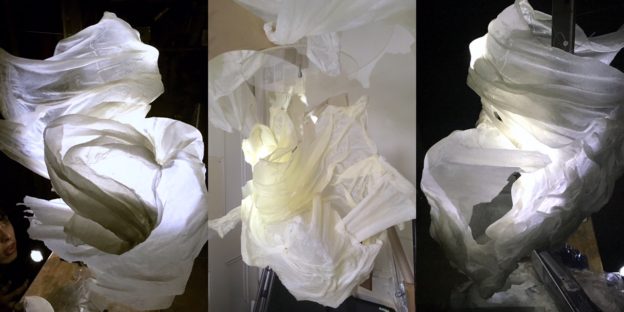 Art is about perspective. But in a deterministic Newtonian world in which, for every action there is an equal and opposite one, perhaps it is the undetermined, uncertain world of Quantum that can

Namnaste; I bow to the divine in you WIP Light and plastic

lead us to Utopia.

Jasmine Pradissitto is an international artist, innovator, and speaker with a background in physics based in London. Pradissitto’s sculptures in NOx pollution absorbing ceramics, pioneer materials using new and traditional techniques. Inspired by nature, the human condition, the mythopoetic and a more sustainable future, her forms create a commentary on an unsustainable, increasingly Anthropocene world slowly being reshaped by the things we consume and then disregard. She creates work that builds awareness about diminishing air quality and biodiversity extinction. She has recently installed one such sculpture ‘Flower Girl’ at The Horniman Museum Gardens to help the bees find their pollinating flowers in London and another ‘Breathe’ is soon being placed on the Euston Road which is the second most polluted road in the UK. She has a Ph. D from UCL on the quantum behaviour of silicon and has studied fine art at Goldsmiths College and London Met. As well as an l artist, with pieces in collections such as The Corinthian and Tokyo Museum, she speaks and lectures on the of power creativity to engender change. View all posts with Jasmine Pradissitto →