Are we our diseases? Is the world just one big petri dish incubating the source of its ultimate destruction? Shiver is an installation of mixed media artworks that turns fear, fear of the viral, of the microbial, and of impending pandemics, into beauty. Ultimately Shiver asks viewers to consider that fear and beauty reside in an uncomfortable dialectic, in this precarious time of contagions, epidemics and bioterrors. 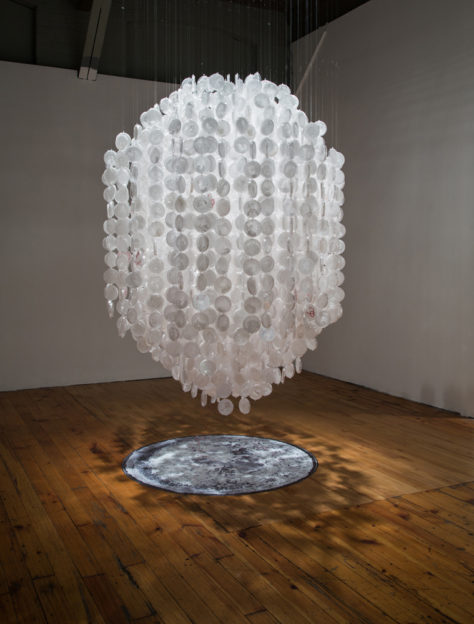 An ‘organism/virus’, hangs from the ceiling, glimmering with salt crystals and red mutations. It is composed of over 2300 petri dishes and pipette tips, capturing prisms of light through grown crystals of salt. It appears to be erupting but is loosely tentacled to an oversized floor-bound photo representation of a salt crystallized petri dish. As viewers walk around the piece, it shimmers like a chandelier, and their movement gently brings it to life, evoking a shiver. 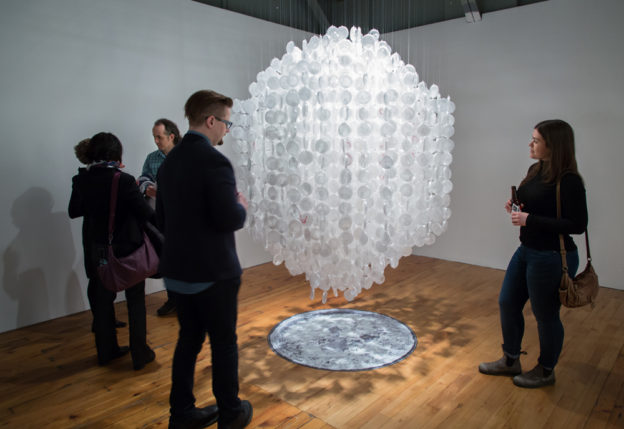 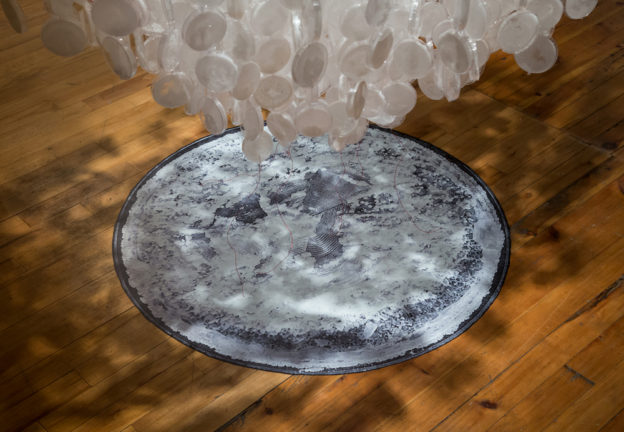 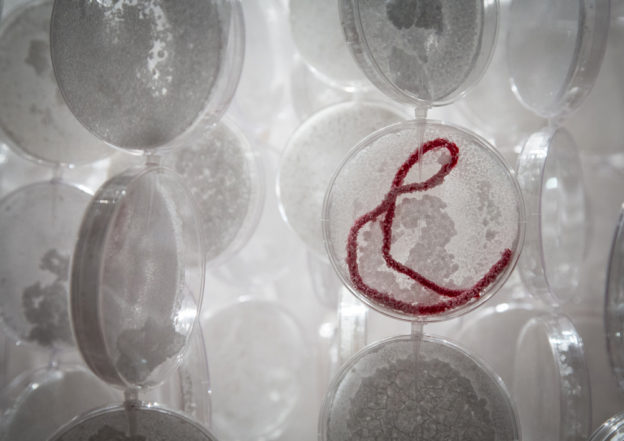 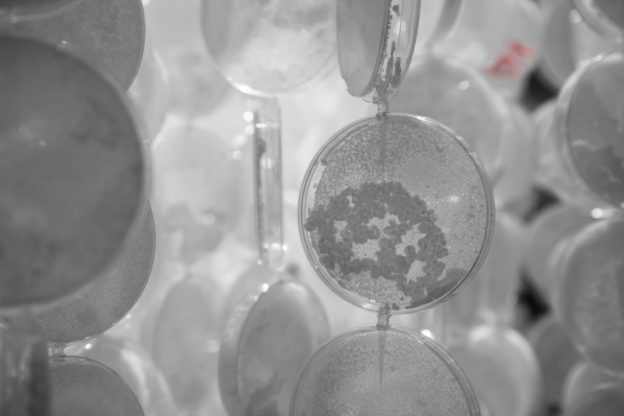 there is no passion so contagious as that of fear.

THE DISORDER OF MINERALIZED ERUPTIONS

THE DISRUPTION OF MIGRATING MICROBES

THE CHAOS OF MULTIPLE IMMERSIONS

What happens when we make beauty out of what we fear? Art. In this case Bioart or art that refers to the viral and microbial, the pathological advance of pathogens, a reality of our times. The central piece of Elaine Whittaker’s installation is a cylindrical accrual of petri-dishes vertically strung.  Each petri dish contains a desiccation or distillation of evaporated brine. Some house an encrusted twist of red wool—Whittaker’s visual equivalent for mutation. Shiver. The overall structure is loosely crystalline, the long strands of petri dishes seem to have grown from the core, mutating in pleasing shapes. Under a microscope the tiny things that kill us are, nevertheless, beautiful.

Humans are 70% water and .4% salt, the equivalent of saltwater. This may explain the resonance we feel with Whittaker’s constructions, our continued appreciation for her continued fascination with this mildly alchemical and powerfully metaphorical medium. The cumulative effect of crystalline structure in Shiver is meant to echo our numerousness, our proximity to one another. Even in the West we are keenly aware of overpopulation. We’re a super-saturation on the planet, like the brine mixture Whittaker makes to grow her whorls and fans of salt petit point and salt lace. Shiver. Because we’re paving the way for the microbes and pathogens, providing easy access to more and more hosts.

Shiver shivers with light, a chandelier of smaller and smaller parts arranged in a pleasing whole, as we are, individuals as units in society, each a beautiful small containment of life, until we are hosts for disease. At which point we become a house for death, ciao bella.

Are we our diseases? Is the globe just one big petri dish incubating the source of its ultimate destruction? We can ponder this in an art gallery. The rusted grids of the Ebola Graph series are charts that show the rise of Ebola in Sierra Leone, Liberia and Guinea, compared to the baseline stasis of Ebola on our continent. Rust never sleeps and neither does disease.

(Kelley Aitken is a Canadian writer and artist. Her published works include Canadian Shield (2016), Love in a Warm Climate (1998), and co-editor of First Writes (2005). She teaches drawing at the Art Gallery of Ontario and is working on a collection of essays about drawing.  www.kelleyaitken.ca)

The sodium chloride crystals at the heart of Whittaker’s Shiver form patterns in dozens of individual petri dishes inoculated with a concentrated salt solution and left to dry. Each petri dish represents a human cell, and interwoven into random cells is a bunched red thread, or “mutation.” In the Ebola Graph series, Whittaker’s crystals cluster on thin wire threads, forming a crystalline grid on which is represented the tragic burden of cases and deaths in the ongoing Ebola outbreak in Guinea, Liberia and Sierra Leone.

Just as Whittaker’s progress was disrupted in the making of Shiver – she lost a quarter of her petri dishes after a test installation and had to begin again – the exhibition hints at the disruption which can occur at the intersection of health and the human environment.

On the surgical masks of the Screened For series the faces of twelve separate pathogens are delicately rendered in gouache, juxtaposed over the mouths of potential human hosts. While in reality infectious agents invade the body through several channels, such as a mosquito vector or a bodily fluid, and while there often exist robust public health measures to prevent or intervene in their transmission, the perception of their threat is palpable in this work. Who is the protagonist? Has she been exposed? Is her mask protective, and what constitutes true protection?

Each work reflects the duality of everyday life. The artist’s salt “mutations” portend disease, and yet salt as a substance has many curative and life-giving properties; aren’t salt solutions used to irrigate wounds and restore fluid balance?  The exhibit Shiver can be interpreted as ominous in nature, and yet, is not the act of shivering the body’s own attempt at homeostasis?

(Mary Spayne is an Epidemiologist and Writer, living in Toronto, Canada)

Photo credit: all photos by David Williams except Screened For self portraits by Elaine Whittaker.

Elaine Whittaker is a Canadian visual artist. She considers biology as contemporary art practice. Her artworks are an intersection of art, science, medicine and ecology. Her practice is based principally in installation and includes sculpture, painting, drawing, and digital imagery, incorporating a range of materials: from the traditional - paint, pigment and wax, to the unconventional - mosquitoes, salt crystals, human cells, and live microorganisms. Whittaker has exhibited nationally and internationally, including among others, Centre Pompidou (Paris, France), Ontario Science Centre (Toronto, Canada), Robert McLaughlin Gallery (Oshawa, Canada), MUSA Museum of Salt (Cervia, Italy), Science Gallery London (UK), Riddoch Art Gallery (Mount Gambier, Australia), Harcourt House (Edmonton, Canada), Fudan University Science Gallery, (Shanghai, China), Gwacheon National Science Museum (Seoul, South Korea), Islip Art Museum (Long Island, US), Science Gallery Dublin (Ireland), Plug In Institute for Contemporary Art (Winnipeg, Canada), Yukon Arts Centre Gallery (Whitehorse, Canada), McMaster Museum of Art (Hamilton, Canada), the Contemporary Art Institute of Detroit (US), Kunsthaus Santa Fe (San Miguel de Allende, Mexico), and the Red Head Gallery (Toronto, Canada). Whittaker has been an invited participant in residencies, workshops and festivals on science, art and medicine, and a featured artist on digital galleries including Art the Science, MEDinART, and Photomediations Machine. Artworks have been highlighted in literary, art, and medical periodicals and magazines, including Hamilton Arts & Letters, Interalia Magazine, SciArt Magazine, E-Squared Magazine, VLAK, Wreck Park, Clot Magazine and Tussle Magazine. Her work is also featured in William Myers' BioArt: Altered Realities, published by Thames & Hudson (2015). In 2018 she was the first Artist-in-Residence with the Ontario Science Centre (Toronto). She is currently Artist-in-Residence at the Pelling Laboratory for Augmented Biology (University of Ottawa), and has participated in two residences at the Banff Centre for Arts & Creativity (Alberta). She is a recipient of grants from the Canada Council for the Arts, the Ontario Arts Council, and the Toronto Arts Council, and holds a BFA in Visual Art from York University, Toronto, an Art Diploma from Toronto School of Art, and BA in Anthropology from Carleton University, Ottawa. She is represented by the Red Head Gallery in Toronto, Canada. View all posts with Elaine Whittaker →