When we observe the brain from the outside we cannot find a neuro-biological structure that resembles the phenomenological world in front of ones noses. The simplest conjecture addressing this problem is that consciousness is correlated with the internal configuration of brain material not directly accessible to external observation. The theory describing the domain of this interior is Quantum Mechanics. However, both its development and its complexity makes this theory difficult to apply to neuroscience or studies of mental phenomena. A simplified approach suggests that a separation between charge and mass can be used to visualization the interior configuration of material. We will show that the forces that hold charge and mass together in the interior of matter act to counterbalance gravito-electric influences from the rest of the universe. Since the configuration of charge and mass is always in equilibrium with both external and internal forces it is an accommodation to stimulation from the outside world and is interpreted as an internal model of that world. We postulate that this internal, and not directly observable model, is the physical correlate of consciousness and the forces holding charge and mass together are the forces of consciousness. These forces and their associated energy patterns exist in all material as a primitive pan-psychic consciousness. Consciousness does not emerge during the evolution of the universe but rather, it is integrated in the structure of all material. Only the size and complexity of our brain material produces human consciousness but other forms exist in both smaller and larger material structures.

The most popular and useful model of classic physical reality looks like a space containing objects and fields of influence. A graphic description of such a model is shown in the lower portion of figure 1. 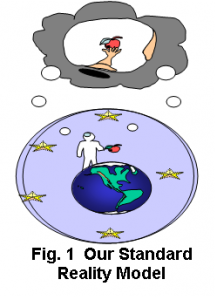 Here an icon of a cognitive being is shown standing on the earth holding an apple. At the outer limits is a ring of masses shown as stars. Inside the skull is a small oval that represents a brain. This small piece of matter is attached to a mind, shown in the upper portion of figure 1 as a thought bubble. The mind is mysteriously connected to the brain as indicated by a small set of  bubbles. The experiences shown in the mind is a 1st Person view of a man holding an apple in his left hand.1 The nose is shown on the right side of the observable optic field. The mind is shown outside the physical universe both for clarity and because the long standing debate regarding its material or spiritual nature has, since the time of Descartes, not been resolved.

We normally project the phenomenal experiences appearing in the mind into the skull of a second person however projecting our own 1st Person experiences into our experience of our own skull has proved problematic. Both the “Hard Problem of Consciousness”2 and the “explanatory gap”3 have shown that the phenomenal experiences we see as objects at a distance in front of our nose cannot logically exist inside the space behind our noses. These contradictions have made our materialistic science an objective world view that applies to an external 3d Person perspective and does not include our 1st Person conscious selves. Attempts to explain consciousness as an emergent property evolving from classic physical reality are doomed to fail because the personal subjective experience has been systematically eliminated from classic physical model and cannot be consistently added without evoking new physical formulations.4

The simplest solution to the problem of consciousness involves two steps. First it is necessary to remember that since the advent of quantum theory physics has been successfully dealing with the inside of matter. By “inside” we do not mean the inside of an object such as a rock that can be seen by breaking it apart, but the inside of an atom that is never, even in principle, seen directly. Knowledge of this inside is always derived from evidence gathered by measuring instruments that produce observables on their external readout displays and is therefore a theoretical inference.  The theoretical nature of our knowledge allows us to project the mind and its phenomenal experiences into the inside of material without conflict with the fact that we do not see our feelings and experiences when we open the brain to look at it directly. The conventional wisdom that conscious mental experiences happen inside the Brain is therefore justified as long as we accept the definition of “inside” as the domain of characteristics beyond the boundary of the measuring instruments through which we know the world. In this case mental experiences are correctly projected into the physical reality happening “inside” of brain material. In conclusion: we propose that the mind happens in the quantum domain beyond the boundary of our senses.

The second step is a bit trickier since it requires an understanding of the mechanism we use to identify objects. In the last paragraph we claim that the 1st Person experience of the world seen in front of our noses is the direct experience of our internal material structure. The statement that “the world in front of us happens inside our material” is so counter intuitive that it will require a careful definition of our words to avoid confusing the observational language, used to describe what we see, from the theoretical language used to describe what we believe is really there, in order to understand its meaning. The distinction between observational and theoretical language was first introduced by the Vienna Positivists5 to distinguish between observables describing what we see and the language of quantum theory, i. e.  Schrödinger’s wave function, describing what we believe is physically real. In every day English the same words are often used to refer to both, leading to never ending confusion. For example the cognitive being shown in figure 1 will be heard saying, “I see an apple”. When in fact he sees a colored blob that must go through a recognition process to be recognized as an object that is identified with the word “apple”. Directly naming a qualia by an object name eliminates conscious acknowledgement of the observational stimulation and refers to a sensation in theory terms. This habit reinforces our belief that we live in an objective reality when in fact this is a theoretical statement.

Consider a scene on a television. We instantly recognize the content of the screen as the outer surface of objects. However we are actually seeing the output of a display into which we project the properties of an object. So it is with us. We actually experience the output of our sensory processing on a mental display inside our brain material. We take the queues from the immediate sensation of the display and calculate what could explain it in our model of reality. At the time of writing we normally use an objective model to explain sensations. We search and usually find a model object that serves as a candidate for explaining the sensation. We know the identified model object is correct if it produces the same stimulation on the display as the original thus reinforcing its apearance. In addition the knowledge we have of objects in our model allows us to project additional object characteristics into the display sensation. This additional information is also experienced as an observable display but usually in a second modality, i.e. our imagination, and is then fused with the original sensation display. The speed with which an explanatory sensation is fused with the original one appears to be instantaneous under normal circumstances but can be lengthened and explicitly experienced when the explanation of the original sensation display is ambiguous. In conclusion: when we think we are seeing an object we are actually experiencing the visualization output of our objective reality model fused with the original sensory stimulation display and both display sensations are correlated with the inside material configuration of our Brain.

Dr. Wolfgang Baer received his Ph.D. in Physics from the University of California in Berkeley. His thesis included a controversial attempt to include a physical analysis of his own role as conscious observer while operating spectroscopic experiments on the recently available element Promethium. His interest in developing UAV vision interpretation systems lead to the analysis of cognitive vision and consciousness studies. He is a regular contributor to conferences dealing with physics and consciousness including Science and Non-duality (SAND), Toward a Science of Consciousness (TSC), Foundations of Mind (FoM), among others. He supports cognitive systems development and macroscopic quantum effects leading toward theories integrating subjective and objective experiences. He recently published with Routledge Press titled ‘Conscious Action Theory’ that is intended as an advanced text to teach the physics of consciousness and summarize his observer based physics research. View all posts with Wolfgang Baer →