‘In Their Right Minds: The Lives and Shared Practices of Poetic Geniuses’ by Carole Brooks Platt

A review by Garry Kennard.  December 2015

I once gave a talk about my paintings and practice to a group of 14 and 15 year old school children. Towards the end of the session one of the girls asked me ‘How do you get into the zone?” This phrase was, at my age, new to me and she had to explain.

When it had sunk in – that it meant, obvious to anyone under 60 years, how do I get into the mood for making pictures – I was able to explain that I did this when necessary by simply beginning, making a mark, even with a scribble.  I explained that once you have something in front of you, no matter what, you have started an argument and have to answer. You have started a new adventure. There are other ways.

Carole Brooks Platt has written an extremely interesting book in which she explores this universal dilemma experienced by all artists and writers, and perhaps even sports men and women. She examines the theme through the practices of some of the greatest poets in western history and has discovered some unique connections in the way they used of reaching their inspirational wellsprings – their ways of ‘getting into the zone’.

Her research also highlights the neuroscience behind many of the manifestations of the poetic urge, the urge to sing rather than talk, as it were. Infantile experience, especially the lack of a mother at an early age combined with, indeed in some ways the source of, a strong development of the right brain hemisphere, seem to be two of the crucial conditions behind the creativity and dissociative nature of her subjects. They all seem to be aware in some sense of their special condition but still needed to seek spurs and stimulation to enable them to access the deep sources of their art. The object was to override the left brain analytic mode and allow access to the broader, more engaged, more imaginative and freer right brain’s approach to the lived experience.

The understated story here is also how poets’ views of this problem through the last few hundred years have changed in relation to parallel developments in brain science. Blake (who appeared to live under right brain dominance all his life) and Keats both seem to have taken it as read that the mythic source of their inspiration came from within but that it was beyond everyday transactional living and part of the universal mystery. Later, others wanted to kick-start the process by trying to get in touch with what they supposed were supernormal, inspirational contacts. All the trappings for this were put into use. Ouija boards and mediums figure strongly. It is notable that in nearly all these cases the characters contacted were all major literary, historic or religious figures themselves – Shakespeare, Sappho, Moliere, Plato, Byron, Jesus etc. Why would Merrill and Jackson hear of Nabokov’s death through their ouija board rather the million deaths happening at the same time? They never seemed to pick up messages from the guy who cleaned out the stables at the Colosseum. Which seems to denote some serious self-esteem among the seekers. And, as an aside, they do seem to be a dreadfully humourless lot.

From the end of the 19th century, even to the mid 20th century, poets were struggling with the sense that their ability to contact inspirational sources from the spirit world was coming into conflict with news coming from the burgeoning development of psychoanalysis and serious studies of brain function. Most of which, excluding some of Jung’s thoughts, were pointing to the source of all this being resident in the supposed recipients’ own grey matter, alongside their more prosaic left hemispheric relations with the material world. Rilke seemed to be a kind of halfway stop on the route to a rational approach to this. When we get to Ted Hughes we see a significant change around. Although he and Sylvia Plath did experiment with such ideas of paranormal contact, it seems that in the end Hughes came around to recognising that he was the source – or rather his brain was the source – of all the mythic figures he could conjure. In effect he came back to Blake’s observation in ‘The Marriage of Heaven and Hell’ that ‘…men forgot that all deities reside in the human breast’. Or ‘the human brain’ as we might put it now.

This book is dealing with a universally serious subject. How do we all, not to say these great writers, deal with this dual reaction to the world. How do we balance the right and left hemispheric attitudes of our brains to give us not only a rational, analytic, perhaps emotionally dead approach to life with one which invigorates and brings vivid and meaningful existence to each encounter with the material world. It seems to me that having examined the high end of this problem in her subjects Carole Brooks Platt has opened up a discussion relevant to all of us. And not only those who create works of art, but also those who partake of them as readers and viewers.  How do they ‘get into the zone’, the zone which allows them to go down deep into the work of art involved and thence into themselves?

I do have a problem with this book. Throughout it Carole Brooks Platt references the paranormal, telepathy, thought transference, ‘healers’, shamans, out-of-body experiences, precognition and so on, as if these were not seriously contentious subjects, which they decidedly are. At one point she writes ‘Even today healing songs learned through spirit guides diagnose and cure illnesses’. Does she believe this? Does she really believe that ‘voices of immaterial beings can . . . prophecy the future and borrow information from another’s mind’? Perhaps I am misreading her intentions. Sometimes I feel she is writing in the context of the belief of the subject in hand, but at others it seems that she does indeed believe that many of these reported phenomena exist and deliver what they say on the tin. I find that a stumbling block.

Having said that, it is an enormously stimulating book (in which an index would have been extremely useful), one which led me to reanalyse my own thinking on this subject. It enriches the discourse on art and the brain with great erudition and deep research. And it clarifies in some measure the ways and means, and indeed the reasons why, we must all at some time get ‘into the zone’. 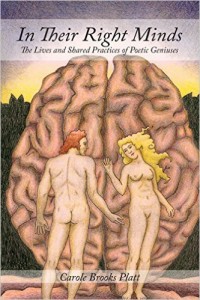 In Their Right Minds: The Lives and Shared Practices of Poetic Geniuses

Garry Kennard is a painter, writer and founding director of Art and Mind (www.artandmind.org). Born in London in 1948 he has exhibited his paintings in London, Oxford, Cambridge, and Winchester and at Petworth House as artist in residence at the 2009 Petworth Festival. His paintings are in many private collections in UK, France and the United States, and in the collection of Clare Hall, Cambridge University. He recently completed a series of portraits of women scientists commissioned by The Royal Society, London. A fascination with how the brain reacts to works of art has lead Kennard to research, write and lecture on these topics. With Rita Carter and Annabel Huxley he devised and directed the unique Art and Mind Festivals which attracted leading artists and scientists to explore what light the brain sciences can throw on contemporary culture. In 2013 GV Art published a book of his writing and paintings called ‘Essays and Images’. Kennard has an interest in mountaineering and has climbed in the Alps and Africa, as well as leading his own expeditions to the Nepalese Himalayas. www.garrykennard.com View all posts with Garry Kennard →