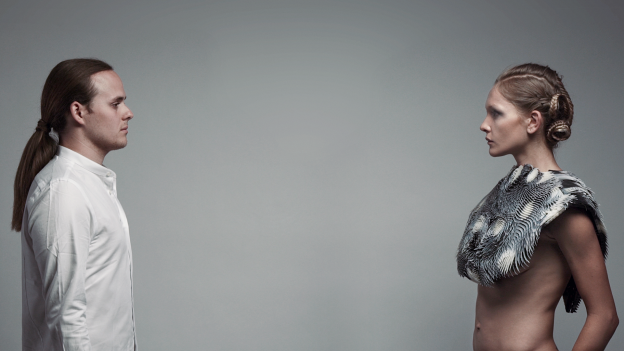 What if our outfit could recognize and respond to the gaze of the other? This is an interactive 3D printed wearable, which can detect other people’s gaze and respond accordingly with life-like behavior.

Our skin is constantly in motion. It expands, contracts and changes its shape based on various internal/ external stimuli including not only temperature and moisture but also feelings, such as fear, excitement and anger. What if our clothing could behave as an artificial skin capable of changing its shape and operating as an interface with the world defining social issues such as intimacy, gender and even personal identities? 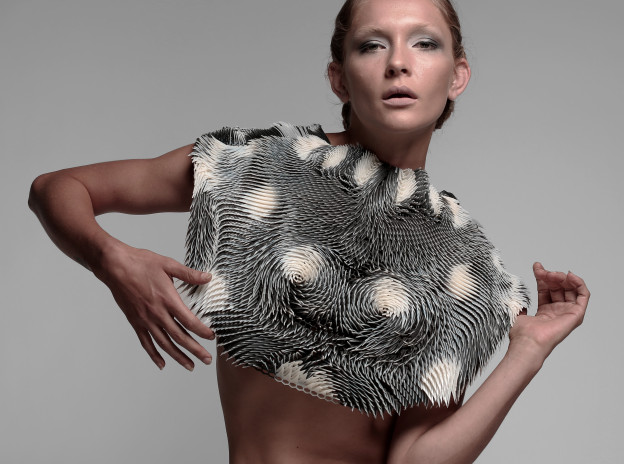 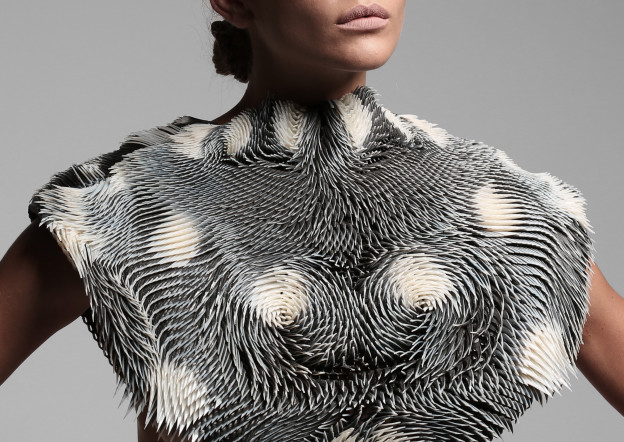 This project offers a vision of the future by exploring the possibility of a second skin fabricated using multi material 3D printing. It engages with a series of issues. Firstly, it demonstrates how the very latest and most advanced 3D printing technologies might contribute to the realm of fashion, by exploring the tectonic properties of the materials used with Objet Connex500 3D Printers. This technology allows the fabrication of composite materials with varying flexibilities, densities, and can combine materials in several ways with different material properties deposited in a single print run. Inspired by the flexible behaviour of the skin itself, this outfit therefore exhibits different behaviours in various parts of the body ranging from stiff to soft. Secondly, it explores the potential of an actuation system, which is assembled as a form of muscle system using Shape Memory Alloy actuators (SMA) that informs the motion of the skin. Thirdly, it investigates how our clothing could interact with other people as a primary interface using computer vision technologies. For this purpose an OMRON image sensing technology camera – capable of detecting gender, age and orientation of the gaze – is used to communicate with a Teensy microcontroller which is able to actuate and control various nodes in the garment.

Caress of the Gaze from Pier 9 on Vimeo.

This project therefore addresses the emerging field of shape changing structures and interactive systems that bridges the worlds of fashion, art, technology and design. It does so, in the belief that by implementing design/motion principles inspired by natural systems, we might be able to rethink the relationship between our bodies and the surrounding environment. Even though this approach is still speculative, it opens up the possibility of a radical new approach to interactive clothing. 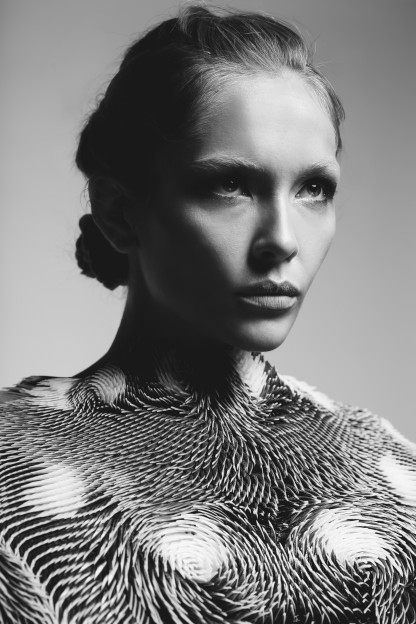 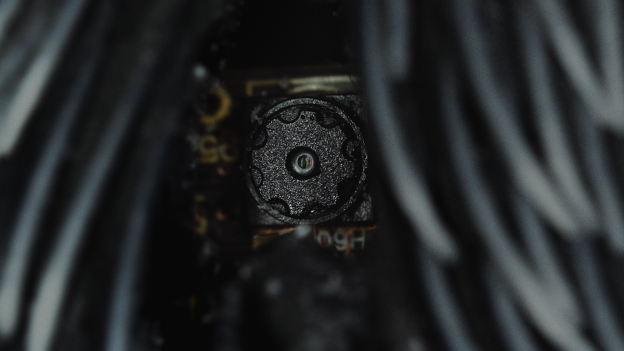 Caress of the Gaze was developed in San Francisco as part Artist Residency at Pier9,

Autodesk. The project was also sponsored by Madworkshop Foundation

Behnaz Farahi is an architect and interaction designer, exploring the potential of interactive environments and their relationship to the human body. In particular she is interested in the implementation of emerging technologies in contemporary art/architecture practice. Her goal is to enhance the relationship between human beings and the built environment by implementing design/motion principles inspired by natural systems. Application areas include architecture, fashion and interaction design. She also specializes in additive manufacturing and robotic technologies. Her work has been exhibited internationally in USA, Canada and China, and has been featured in several magazines and online websites including WIRED, The Guardian, BBC, CNN, Motherboard, Dezeen, Frame Magazine, the Creators Project and many more. Behnaz Farahi has won several awards including first prize for the international Kinetic Art Organization competition in 2013, first prize for the best student work at ACADIA conference in 2014, and an honorable mention at Beyond: Pavilion of Innovation in Barcelona in 2015. She is also the recipient of the Madworkshop Grant and the Rock Hudson Fellowship. Behnaz Farahi has worked with leading firms such as Autodesk, Fuksas Studio, and 3DSystems/ will-i-am. She has also collaborated with Professor Behrokh Khoshnevis on two NASA funded research projects developing a robotic fabrication technology to 3D print structures on the Moon and Mars. She was an Artist in Residency at Autodesk, Pier 9. Currently she is an Annenberg Fellow and PhD candidate in Interdisciplinary Media Arts and Practice at USC School of Cinematic Arts. She has an Undergraduate and two Masters degrees in Architecture. www.behnazfarahi.com View all posts with Behnaz Farahi →