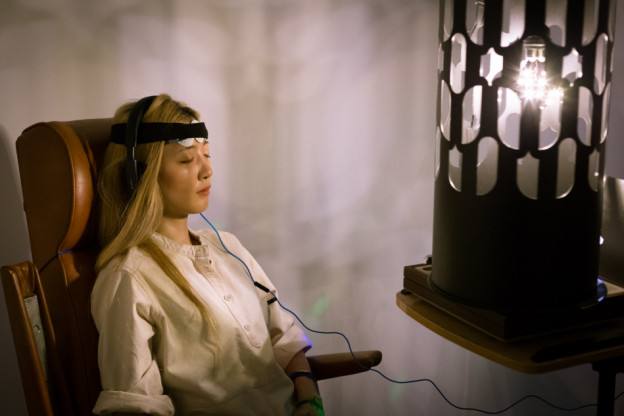 Inducing hallucinations by Flickering light emerged long before the scientific era. In 1564 Nostradamus conducted Flicker experiments (at the bequest of Catherine de’Medici), he was inspired by the legends of Lucrezia Borgia and the subtle magic of ‘photic-entrainment[1] by flames she employed to access visionary divinations, and predict future events.

At this time churches had collection boxes outside to beckon donations for the upkeep of their multicoloured vehicles for reaching visions – stained glass windows, illuminated by the sun. How far removed this now seems from our contemporary zones of individual user, customisable stimulation, secreted behind sunglasses and headphones, immersed in immediate isolation. At ten years old William Blake saw his first vision, it was a tree full of angels. This ability to “see” what he imagined never deserted him in his visionary creations of poetry, painting and engraving. Those who watched him draw imaginary personages affirmed that he had the rare ability to see mental images as if they were outside of his head. He writes ‘The imagination is not a state. It is the human existence itself.’[2]

Neuroscience revealed more secrets about the mind in 1819, when Bohemian physiologist Dr Jan Purkinje’s interests in understanding vision were stimulated, encouraged through reading Goethe’s Farbenlehre[3] and because of his use of the phenomenological method. Purkinje, who had also been trained by monks and was a by now a friend of Goethe, wrote a detailed account in his first book of his preliminary scientific accounts of ‘Flicker’. Here he observed various patterns such as crosses, stars and spirals, when waving his hand between his eyes and a gaslight. Another influential discovery was made by inventor Shelford Bidwell, best known for his work with “telephotography”. ‘Bidwell’s ghost’ is a visual phenomenon associated with after-images produced by alternating flashing lights. Early electrical scientific Flicker, published in the neurology journal Brain, used a device known as ‘Benham’s top.’ It can be traced to a French monk, Benedict Prévost, who in 1826 observed colours ‘like a heavenly light on his fingers’ – when he waved his hands about in the cloisters. Finding that this also happened with white cardboard, he realised that it has a physiological origin, in the eye, and correctly attributed it to different rates of action of specific colour mechanisms of the retina. The arcs of pale colour are termed Fechner colors or pattern-induced Flicker colors (PIFCs.) Clinical reports of Flicker stimulation appear as far back as the beginning of the 20th century. In the Salpêtrière Hospital in France, patients gazed into the Flickering light produced from a spinning, spoked wheel in front of a kerosene lantern, which doctors observed a reduction in their anxiety and hysteria.[4] 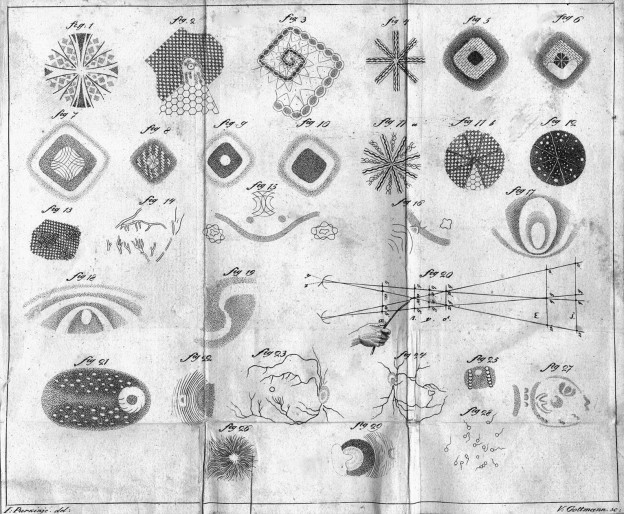 In the mid Nineteenth century further investigations made by Han Helmholtz were published, when he also coined the term ‘shadow patterns’. Up until the middle of the twentieth century, only a handful of scientists besides Helmholtz had made “brief reference to hexagonal figures, grids, radial lines and mosaics.” He commented – ‘perceptions also can only be the result of psychic energy’[5]. Notably this captivates the fervent desire of the time to demystify and scientifically quantify visionary and psychic phenomena in describable terms, which soon led to the invention of the electroencephalograph.

John Smythies in the University of Cambridge later categorised and documented these types of archetypal patterns observed when looking a different strobe flash frequencies. From research into insulin hypoglycemia he reported visualisations of entopic phenomena. Since these effects also appeared in hypnagogic hallucinations, Smythies believed that the “form constants of hallucinations represents a worthwhile field of study“[6]. In his earlier mescaline research, he ardently fought to prove that his visions counted as proper and legitimate forms of scientific observation.

The birth of the stroboscope can be traced to 1832, when Belgian scientist Joseph Plateau used slotted disks turning at high speeds to provide a viewer with an illusion of movement. The mathematician and physicist Simon Stampfer built a similar apparatus and soon thereafter coined the term “stroboscope.” In the 1920s electronic stroboscopes for visualising fast phenomena were already commercially available for industry. The development of this technology is usually credited to Harold Edgerton, professor of electrical engineering at MIT and author of well-known photographs of bullets in mid-flight and half-exploding balloons.

The invention of the Electroencephalograph by German psychiatrist Hans Berger was made in 1924. His work on the human EEG was part of a forty year program of psychophysical research. The central theme in Berger’s work was the search for the correlation between objective activity of the brain and subjective psychic phenomena, and his desire to understand the mysterious relationship between mind and matter.

Hans Berger was one of a few to recognise Richard Caton’s importance, a scientist from Liverpool, as he had already laid the groundwork for EEG (electrocorticogram) recording in 1902. Berger cited Caton posthumously in his published report on the discovery of Alpha waves in 1929, when he announced it officially to the British Medical Association.[8]

‘Caton has already published experiments on the brains of dogs and apes in which bare unipolar electrodes were placed either on the cerebral cortex and the other on the surface of the skull. The currents were measured by a sensitive galvanometer. There were found distinct variations in current, which increased during sleep and with the onset of death strengthened, and after death became weaker and then completely disappeared.’[7]

The introverted Berger was initially unsure of his findings, and they were met with incredulity and derision by the German medical and scientific establishments. But these were revolutionary discoveries, and in fact, Berger founded an entirely new and very important branch of medical science – Clinical Neurophysiology. Describing the discovery of Alpha brainwaves, Berger noted – ‘a rhythmic oscillation of potential at a frequency of 10 cycles per second…detected in the human subject by electrodes applied to the head…present when the subject lies quietly with eyes closed and disappearing when attention is fully occupied.’[8]

Two English scientists, Lord Edgar Adrian and Dr Matthews, repeated and elaborated on Berger’s work. Their paper on the cerebral Alpha rhythm was published in the Neurology journal Brain[9] in 1934. Here they proved how ‘a coordinated beat’ could be imposed on the Alpha rhythm of a test person sitting in front of the lamp (with his or her eyes closed). To produce the Flicker they were using ‘Benham’s top’ – a rotating disc with a black and white pattern that fuses to form concentric rings of different colour, visible at different places on the disc.

Ethical implications soon emerged when a psychiatrist was the first to use an EEG recording as evidence defending his epileptic patient charged with the murder of a schoolgirl, and contrastingly a situation when a diagnosis of psychopathy from an EEG brain print helped secure a conviction.

Luciana Haill is a contemporary Surrealist working with neuro-technologies and her recent practice has focused on artist Brion Gysin’s Dreamachine, Entoptic visuals and the phenomena ‘Flicker’. She has developed this into a series of performances and installations involving the realtime monitoring and sonification of the participants own brainwaves using techniques from hypnosis and meditation, she is considered a pioneering artist in her field. The ‘Phrontesterion’ (EEG & Dreamachine) references the notion of ‘The Visionary’ and was shown internationally in venues including The Royal Academy, The Waag Society in Amsterdam, Kinetica Art fair London and KIBLA in Slovenia. https://lucianahaill.wordpress.com/ View all posts with Luciana Haill →