Human faecal transplants and the bacteria that lives on our hands are the subjects of two groundbreaking new artworks by leading British bio-artist Anna Dumitriu, at the Eden Project‘s new permanent exhibition “Invisible You: The Human Microbiome”, which opened on 22 May 2015. The exhibition investigates the bacteria that live on and inside the human body.

Dumitriu’s sculptural installation “Don’t Try This At Home”, exposes the revolutionary new healthcare procedure of human faecal transplants, and her interactive digital work “The Human Super-organism”, a collaborative work with fellow artist Alex May reveals the bacteria that lives and grows on our hands.

Dumitriu is best known for creating sculptural installations and textile works that actually use bacteria as a medium as well as a subject, such as the famous “MRSA Quilt”. Her 2014 pioneering touring exhibition “The Romantic Disease” included altered historical objects and the extracted DNA of tuberculosis bacteria and was exhibited in London, Amsterdam and Berlin to international acclaim. 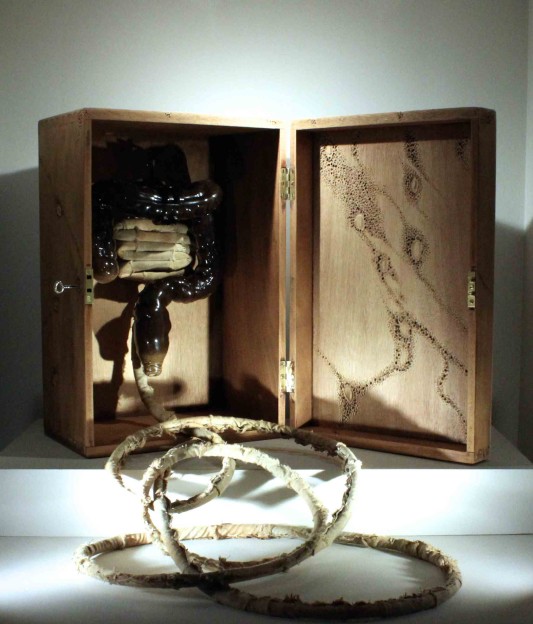 “Don’t Try This At Home”

For the Eden Project, Dumitriu has worked closely with Caroline Chilton & Jane Freeman from The Healthcare Associated Infection Research Group at University of Leeds to create “Don’t Try This At Home”, a sculptural installation exploring the complex story of faecal microbiota transplants, used for the treatment of long-term infections caused by the superbug Clostridium difficile.

This enigmatic sculptural artwork comprises a prepared faecal transplant, textiles stained and patterned with gut bacteria, anatomical glass, and an unlocked antique wooden box, which the artist has carved with bacterial spores. All the biological elements have been sterilised. 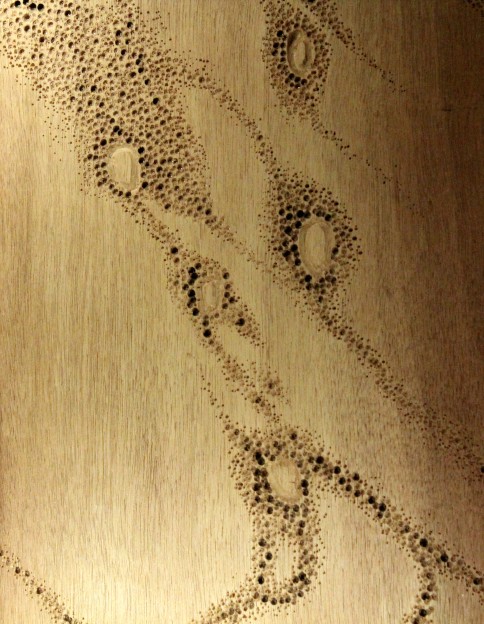 “The Human Super-organism” is an interactive installation that allows participants to imprint their hands on to a virtual Petri dish and watch the diverse communities of bacteria that live on them to grow before their eyes, made in collaboration with digital artist Alex May.  It reveals the complex communities of bacteria that constantly live on the skin and forces us to re-evaluate our notions of clean and dirty. 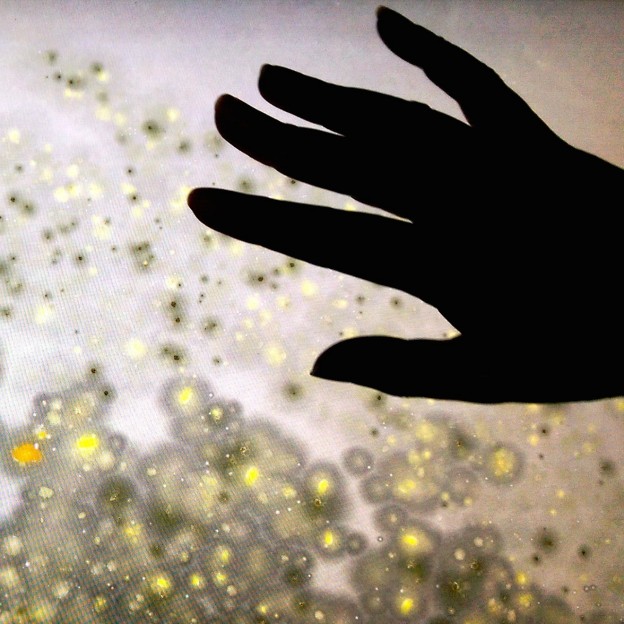 The interactive installation is made using custom software written in C++ and uses sensor technology to track the hands of participants as they touch an interactive screen. The resulting ‘virtual Petri dish’ images are generated in real time for each participant from a library of high definition time-lapse films made by the artists using DIY microbiology techniques and in collaboration with The Modernising Medical Microbiology Project where Anna Dumitriu is artist in residence.

Other articles on Anna Dumitriu in the Interalia Magazine –

Anna Dumitriu’s work is at the forefront of art and science collaborative practice, with a strong interest in the ethical issues raised by emerging technologies and a focus on microbiology and healthcare. Her installations, interventions and performances use a range of biological, digital, and traditional media including live bacteria, robotics, interactive media, and textiles. She has a strong international exhibition profile, having exhibited at The Picasso Museum in Barcelona, The Science Gallery in Dublin, The Museum of Contemporary Art (MOCA) Taipei, and The V & A Museum in London. Her work is held in several major public collections, including the Science Museum in London. She is the founder and director of “The Institute of Unnecessary Research”, a group of artists and scientists whose work crosses disciplinary boundaries and critiques contemporary research practice and won the 2012 Society for Applied Microbiology Communication Award.

Dumitriu holds the post of Artist in Residence on the Modernising Medical Microbiology Project at The University of Oxford in collaboration with Public Health England, a Visiting Research Fellowship: Artist in Residence position with the Department of Computer Science at The University of Hertfordshire, and a Visiting Research Fellowship: Lead Artist position with the Wellcome Trust Brighton and Sussex Centre for Global Health Research. She is also a Research Fellow with Waag Society and Lead Artist on the Creative Europe supported project “Trust Me, I’m an Artist” which investigates the novel ethical problems that arise when artists create artwork in laboratory settings. Her book of the same name, co-authored with Professor Bobbie Farsides, was published in 2014. Her ongoing project “The Romantic Disease: An Artistic Investigation of Tuberculosis” was funded by the Wellcome Trust and is now touring internationally. She is currently working on “Sequence” which investigates the technologies behind whole genome sequencing of bacteria, funded by Arts Council England.

Alex May is an artist exploring a wide range of digital technologies, most notably video projection onto physical objects (building on the technique known as video mapping or projection mapping by using his own bespoke software), also interactive installations, generative works, full-size humanoid robots, performance, and video art. He has performed art at Tate Modern and Watermans, and exhibited internationally including at the V&A, Science Museum, Bletchley Park, the Museum of Contemporary Art in Caracas, Venezuela, the Science Gallery in Dublin, the Rockefeller Arts Center at the State University of New York, and the Grande Halle de la Villette in Paris. He gives talks about many aspects of digital art, and public engagement with social robotics through art (Waag Society in Amsterdam, ICT2013 European Commission Digital Agenda event in Vilnius, Gray’s School of Art in Aberdeen, British Film Institute in London, Ahmed Shawky Museum in Cairo) and runs workshops for artists using his own software (for Fluxmedia at Concordia University in Montreal, International Symposium on Electronic Art (ISEA) in Istanbul). Alex is a Visiting Research Fellow: Artist in Residence with the computer science department of University of Hertfordshire and a Digital Media Arts MA sessional lecturer at the University of Brighton.