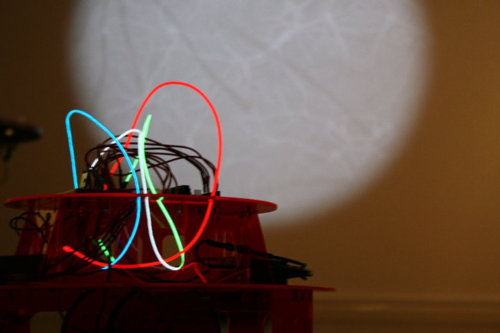 The Emergence of Consciousness

The “Emergence of Consciousness” project was a collaboration between artist Anna Dumitriu and scientists at the Centre for Computational Neuroscience and Robotics at The University of Sussex. It was performed at Lighthouse in Brighton in July 2010.

The project drew together rigorous practice-based artistic methodologies and scientific research to attempt to investigate the notion of conscious experience from a philosophical point of view, inspired by perspectives of embodiment (Varela, Thomson and Rosch, 1992) and situatedness (Brooks, 1991) in evolutionary robotics  and neural network learning systems. Movement sensors were used to investigate the relationship of movement to experience as well as EEG sensors. 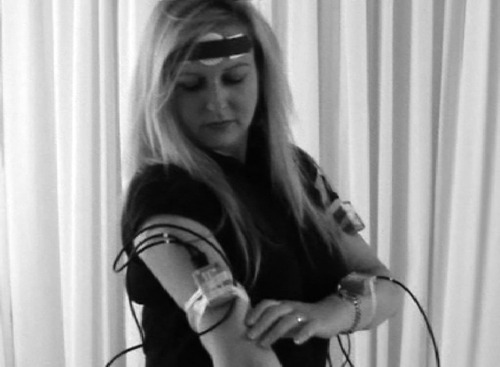 The main outcome was a performance artwork using sensory and movement deprivation (e.g. blindfolds, physical restraints etc) and augmentation to reflect physical developments in the human body (from infancy to old age). It created an embodied representation of how experience might be constructed, through physical interaction with the environment and other performers, and the emergence of shared beliefs. By taking on the role of a robotic agent the artist began to understand her own mind in new ways.

The project was funded by Arts Council England and supported by The Centre for Computational Neuroscience and Robotics at The University of Sussex and Lighthouse. It was also awarded a Cultural Olympiad London 2012 Inspire Mark. “The Emergence of Consciousness Project: Investigating machine consciousness though performance art”

An exclusive interview with Anna Dumitriu will appear in issue 3 of the Interalia Magazine, on the theme ‘Convergent Territories’