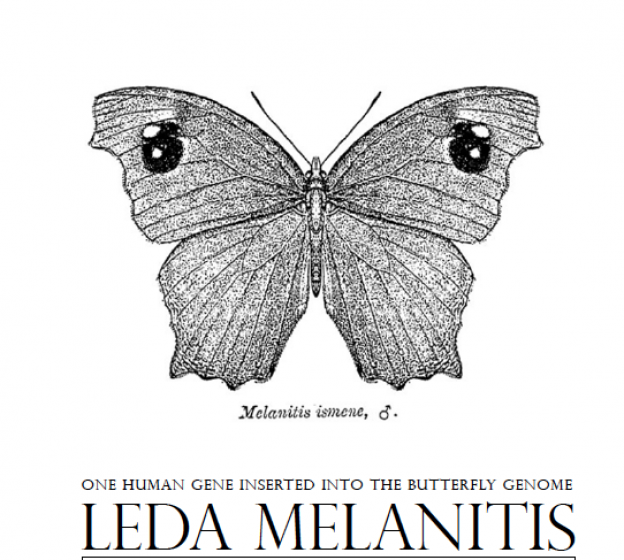 A work of inserting a human gene (artists‘ Melanitis Yiannis) in a butterfly (species: Leda Melanitis)

Yiannis Melanitis’s gene will be micro-injected into the butterfly named Leda Melanitis (the Common Evening Brown of the Containing group: Melanitini, Linnaeus 1758 ).  The gene of the artist will be inserted in the genome of the butterfly which is sharing the same name.

One human gene, still to be identified during the research stage of the project, will be inserted into the butterfly genome. We are particularly interested in genes that encode for the eye. The human gene, obtained from Yiannis Melanitis genome, will be linked to a mCherry tag (named in science a reporter gene) in order to allow visual confirmation that the human gene was successfully introduced (as the reporter will provide red color in cells where the human gene is expressed). We are especially interested in following the expression of the human gene (and the reporter gene mCherry) in the eyes of the butterfly and its wing.   Our aim is to create a hybrid organism with human genes that express human proteins on its wings. This Project will also be a good opportunity to further investigate if butterfly cells can recognize human proteins and respond to them.

The collaborating scientists (Prof. Antonia Monteiro’s group at Yale) have experienced in the genetic manipulation of butterflies (see supporting information) and are interested in studying the outcome of this artistic project. In fact, co-option of the eye developmental gene regulatory network may have led to the appearance of novel functional traits on the wings of flies and butterflies. The first trait is a recently described wing organ in a species of extinct midge resembling the outer layers of the midge’s own compound eye. The second trait is red pigment patches on Heliconius butterfly wings connected to the expression of an eye selector gene, optix.1. It will therefore be challenging to find out whether introduction of a human gene related to eye development can lead to significant changes in butterflies eyes or wings.

The terms ‘‘gene,’’ ‘‘organism,’’ and ‘‘species’’ have been used in a wide variety of ways, in a wide variety of contexts. Anyone who attempts merely to map this diversity is presented with a massive and probably pointless task. [David L. Hull, Matter of Individuality, Conceptual Issues in Evolutionary Biology, Third Edition, Edited by Elliott Sober, Bradford Books, 2006 Massachusetts Institute of Technology].

Within the modern biological context of the synthetic model (modern evolutionary synthesis), it is not clear if genes or organisms are evolving, if the individual (i.e a human or a butterfly) is the object of change instead of the genetic material it carries.

A gene is defined as an information carrier of an organism and the information of set-genes may be almost the same in different species. The role of information in life is critical. Not through a semeotics interpretation, but as a physical quantity.  Common thought, still preoccupied with the notion of information as an outcome of matter, is difficult to accept the idea that the world itself might be the outcome of information. This was enclosed in the physicist‘s John Wheeler phrase “the it from bit”:

‘It from bit’ symbolizes the idea that every item of the physical world has at bottom–a very deep bottom, in most instances–an immaterial source and explanation; that which we call reality arises in the last analysis from the posing of yes/no questions and the registering of equipment-evoked responses; in short, that all things physical are information-theoretic in origin and that this is a participatory universe. (Wheeler, John A. (1990), W. Zurek, ed., “Information, physics, quantum: The search for links”, Complexity, Entropy, and the Physics of Information (Redwood City, California: Addison-Wesley, 1990). Leo Scizard was the first to define the bit from information (Melanie Mitchel, Complexity: A Guided Tour, Oxford University Press, USA; First Edition edition, 2009), in order to solve the famous paradox of Maxwell’s demon. But the crucial hit on the non-organic nature of information itself were Stephen Wolframs‘ ideas on building life patterns out of simple laws, suggesting that all organic life can be the outcome of computational processes. The next step is generating life from inorganic chemicals – a kind of “inorganic biology”  by building inorganic chemical-cells, to create self-replicating, evolving inorganic cells that would essentially be alive (Lee Cronin, 2011).

By inserting information in the core of the physical world we confront the conceptualization of life. Human presence inside the physical event, by changing the event itself, is a major issue since quantum mechanics era. Interventions occurring at the biological scale however, present several differences compared to that model, since the entropy to be calculated is more complex. The entropy of DNA itself can be analogous to Shannon’s equations used to calculate the entropy of a text. The rules of grammar may be applied also to DNA code series. [see J. Kevin Lanctot, Estimating DNA sequence entropy, Dept. of Computer Science, University of Waterloo, Canada].

The interference of the artist, the biologist or the experimentist in general, has to provide changes to the entropy of the event in general. That’s a crucial point of accepting, that if something has to be done, there is always a cost that may exceed the energy demanded for a specific work (artwork). My aim is to see all biological interferences as changes in the entropy of the artistic set. Artistic sets, I define, are environmental time-space events that have a precise starting amount of entropy without a known conclusion. The purpose of an action in the arts has to be considered and possibly measured by the amount of escape from ‘normality‘.

How and why an organism act towards a decision (therefor producing more entropy) cannot be considered as normal or un-normal. The term Hamiltonian spite, within the field of social evolution, refers to behaviours occurring among conspecifics that have a cost for the actor and a negative impact upon the recipient. Richard Dawkins also put this issue on discussion since his Selfish Gene book (1976), where he presents a gene-centred view of evolution:  the replicators are the genes within organisms, with each organism’s body serving the purpose of a ‘survival machine’ for its genes. (wikipedia). The origins of a genecentric idea comes rather from W. D. Hamilton, in a 1970 paper Selfish and Spiteful Behaviour in an Evolutionary Model, where Hamilton considers the question of whether harm inflicted upon an organism must inevitably be a by-product of adaptations for survival.

But what exactly is the natural selection process? Natural Selection is defined as The Driving Force Behind Evolution. Also mutation, the basis of Natural Selection, is information change, caused by the environment. Are researchers part of this environment? If selection is considered to occur on the gene level, then the central mind, the informational context that drives this change, might be rediscussed. We tend to consider that genetic changes have a «natural basis» and should be left on that status quo. However, none natural event happens without a human action, by means that, from the primeval era of human history, interventions on the natural scale were drastic and there is no context we may perceive nature out of it. As Stephen Gould recently put it, evolution is like a videotape that, if replayed over and over, would have a different ending every time (Gould 1989, especially pp. 45–52, 277–291).

The conceptualization of life is a preoccupation of philosophy. In the first place, substituting animal genes with human ones seems to contextualise an issue that aims to override its own context. On the bioscale, genes are the carriers of information, but information evolves also. A human gene from Melanitis Yiannis in a hybrid butterfly that in named Melanitis LEDA, is also a linguist-sociological overlap with ontological consequences that require further analysis.

The extraction of a vocabulary out of its environment, transforms the amount of information it carries. Information has a cost in information indeed…

Yiannis Melanitis work initiates from an intense conceptualization on the strategies of the contemporary artist and the artwork itself, deviating from its epistemological origins, implying the use of heterogeneous artistic media, through installations, performances, critical texts, sculptures, paintings and drawings. View all posts with Yiannis Melanitis →