I work in sculpture, installation and digital photography, investigating the relationship between aesthetics, medicine and our bodies. In my digital artworks, historical anatomical images have been made into digital collages that ask new sets of questions about medical science; its histories, aesthetics, methods and knowledge structures. These artworks allow for an interdisciplinary dialogue between digital technology, contemporary biomedical science and art – three disciplines that are ultimately not as far apart as they initially might seem. In my sculptural work, old medical textbooks have been reworked and integrated into vintage medical equipment and placed in laboratory-themed installations. My ambition is to create new conversations in contemporary art and medical science, employing the complex visual language of medical science, as well as transforming the physical material and matter of obsolete medical knowledge.

In the 12 works in The Disaster Series I have digitally layered two examples of 19th-century images; pages from 19th-century anatomical atlases that were intended to instruct medical students how to visualize the interior of the body prior to dissection, and disaster scenes from 19th-century illustrated newspapers and graphic publications such as the London Illustrated News. Through various digital imaging techniques, I have inserted 19th-century disaster scenes into the deep anatomical regions of the body; shipwrecks swirl inside the cranium, great fires burn in the chest regions, distressing volcanoes erupt in the lungs. In suggesting that tragedies, losses, and sufferings might lodge themselves deep inside our anatomies, this series investigates the central role of disaster in the development of Western science’s empirical investigations, notions of “progress” and the construction of identity. In these re-readings of anatomy, the imagining of disasters and the discourse of calamity are given visual and contemplative space. 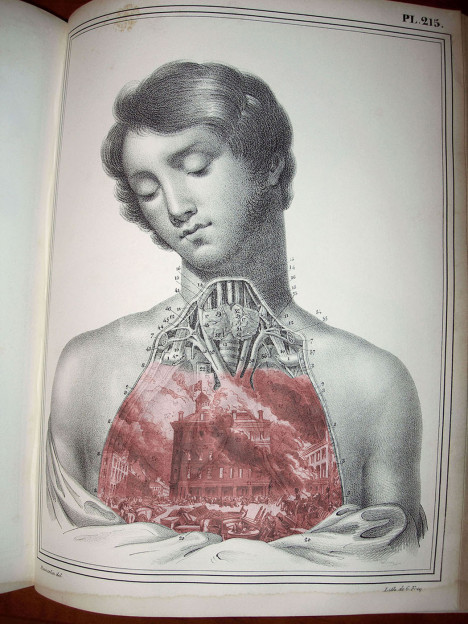 Conjoining the sentimental and the scientific, a number of my artworks have centered on the human body as a complex site that embraces fragility, mortality, beauty and memory all at once. The Classical medical figure or Victorian monarch is often isolated and depicted in my work as neither dead, nor alive – seemingly hovering between life and death. In the digital collages entitled Anatomy of a Diamond Jubilee: Victoria, Marbled Albert and Marbled Victoria, the dissected monarchs appear regal and vulnerable at the same time. It remains a struggle to understand these anatomized figures as only a scientific model – we see them aesthetically and emotionally too. 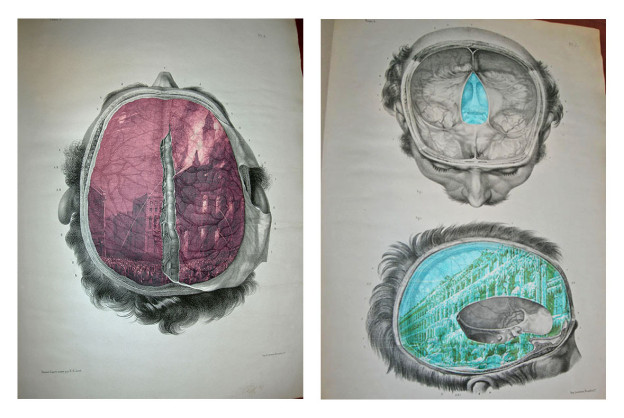 The techniques commonly used in medical dissection – cutting, splicing, isolating and preserving individual organs and body parts – are often re-applied in my art-making process. SLICED and Red Eye consists of a series of cut-up vintage anatomical transparencies. Each unique set represents a stage or process in the dissection process. Isolated in dangling test tubes, images of the dissected human eye are divided into reduced, yet still recognizable, sections. The blank physical spaces in-between the test tubes allow for mental reflection and emotional/ethical contemplation about scientific methods and applications. 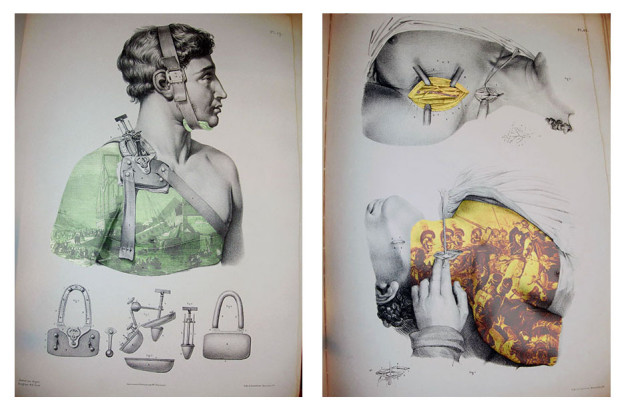 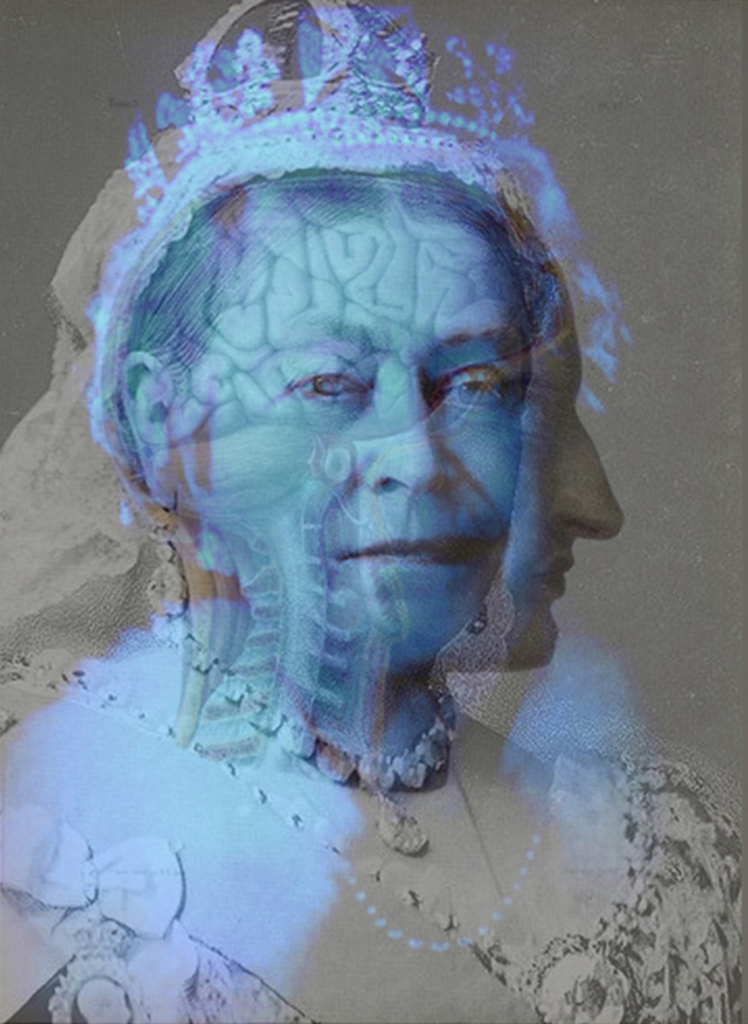 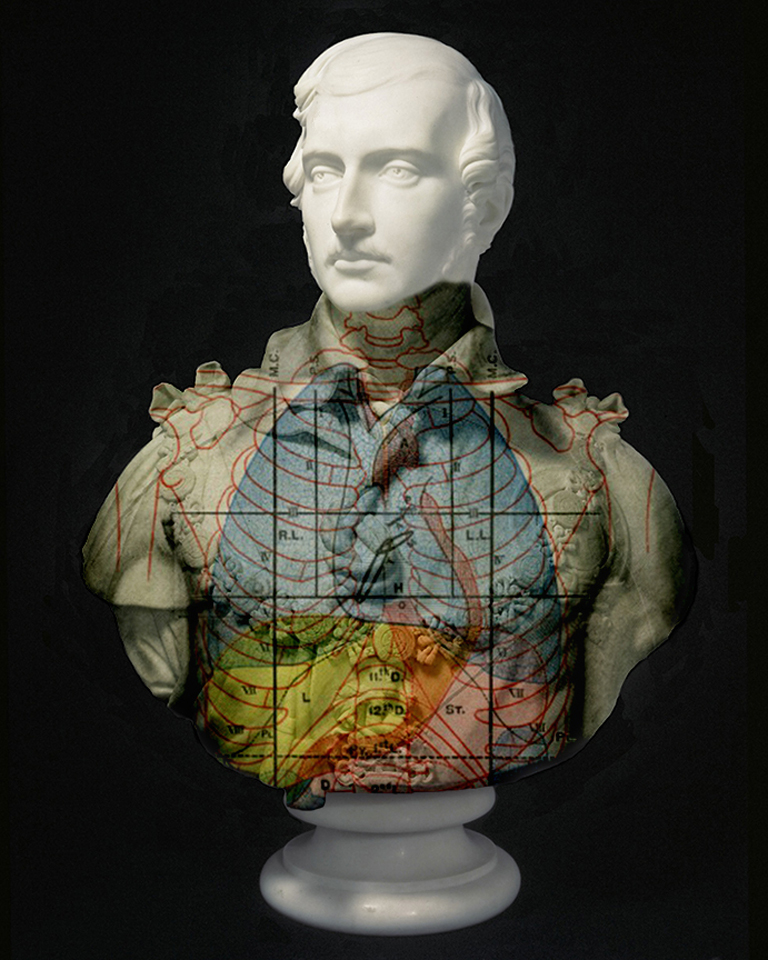 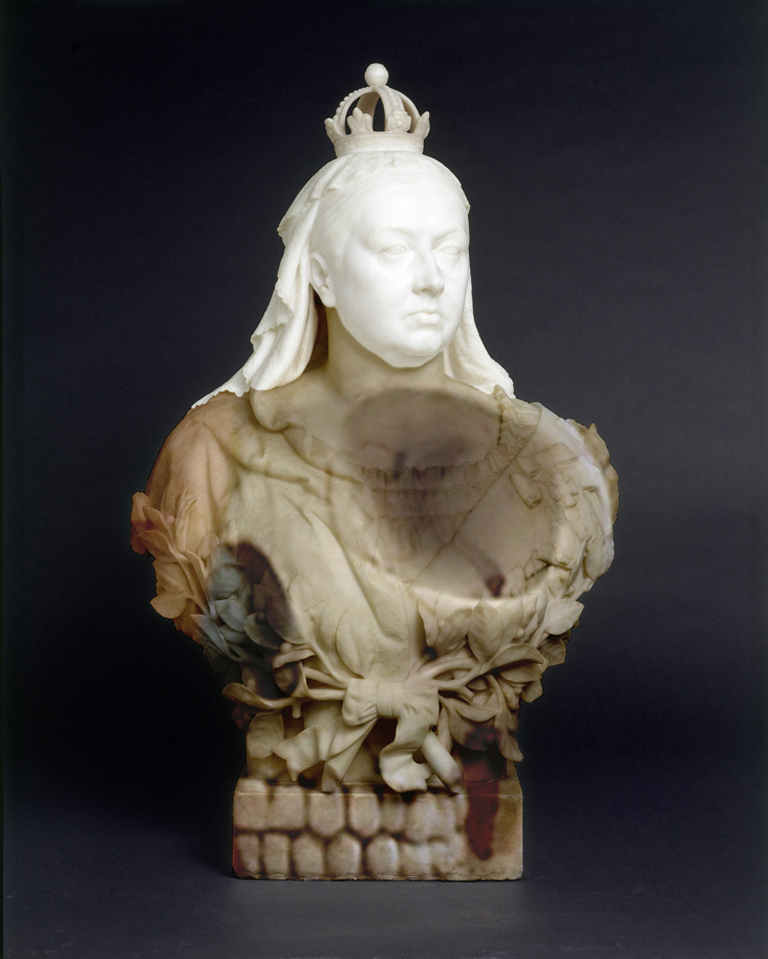 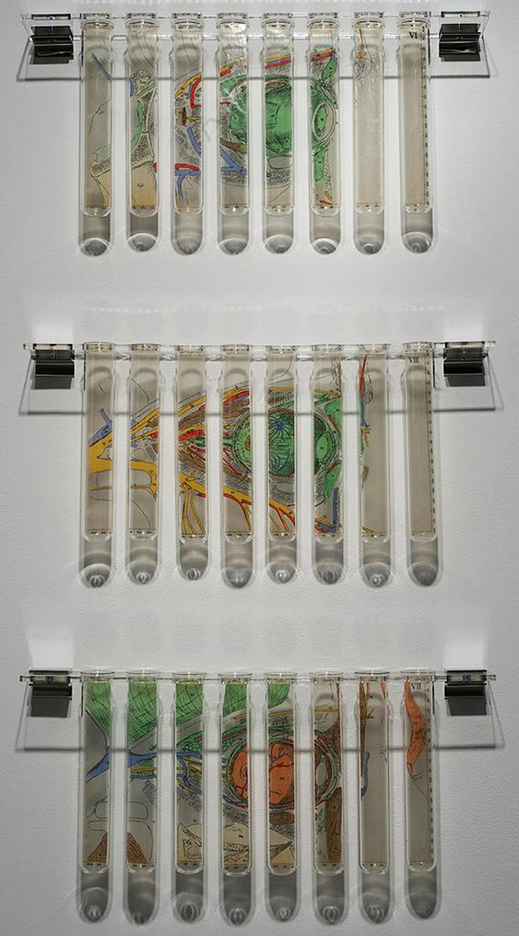 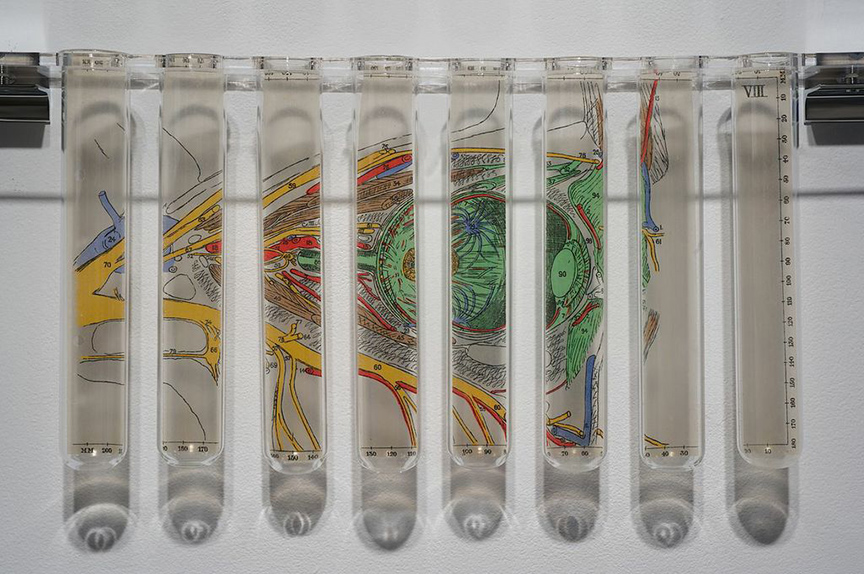 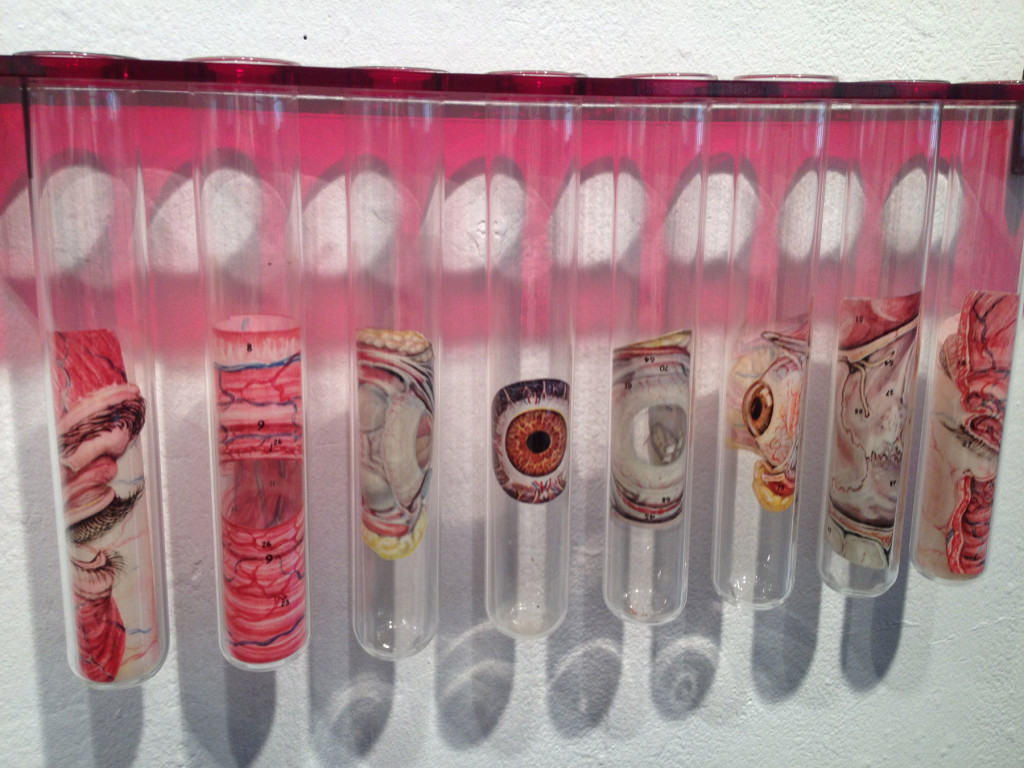 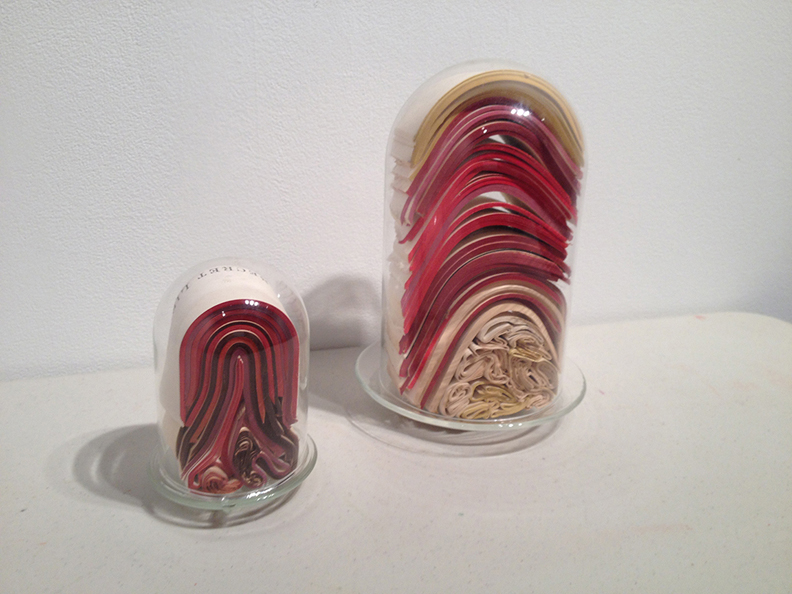 My latest Wound Care Series re-forms the pages of old medical textbooks into objects referencing cross-sections of the interior of the human body. Looking like layers of flesh, the colored edge pages from these old books refer to layers of structural organization of the body such as tissues, muscles, organs, fat and bone. Bound with various wound care materials – gauze, plaster cast materials, and cotton bandages – they embrace care techniques of treating bodily wounds. In many respects, these wrapped bodily sculptures build on my investigations into medical materials and the materiality of the body. Displayed on vintage medical trays and placed inside of laboratory glassware, they transform obsolete medical knowledge into something new. They represent novel types of biomedical specimens and biomedical vitrines that reference the fate of human flesh in the scientific world order. 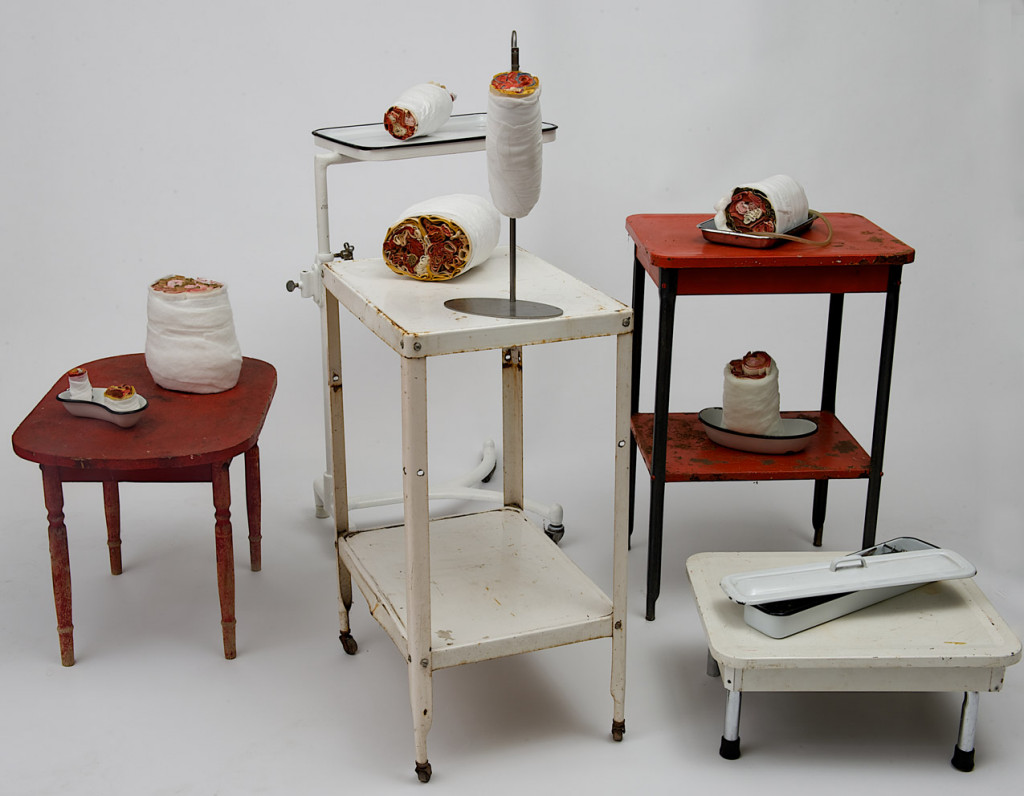 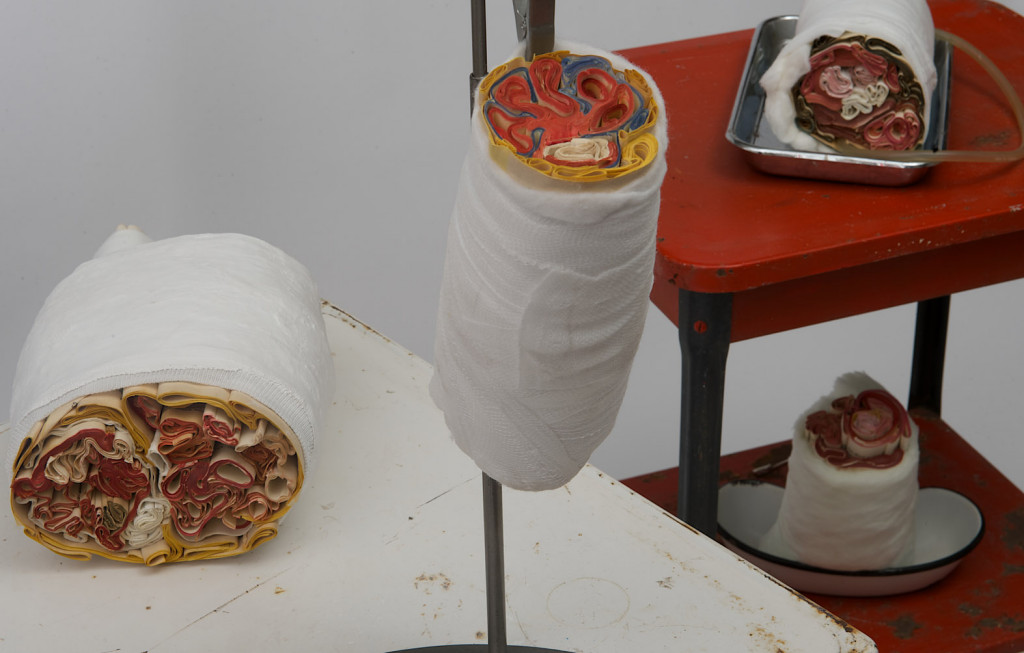 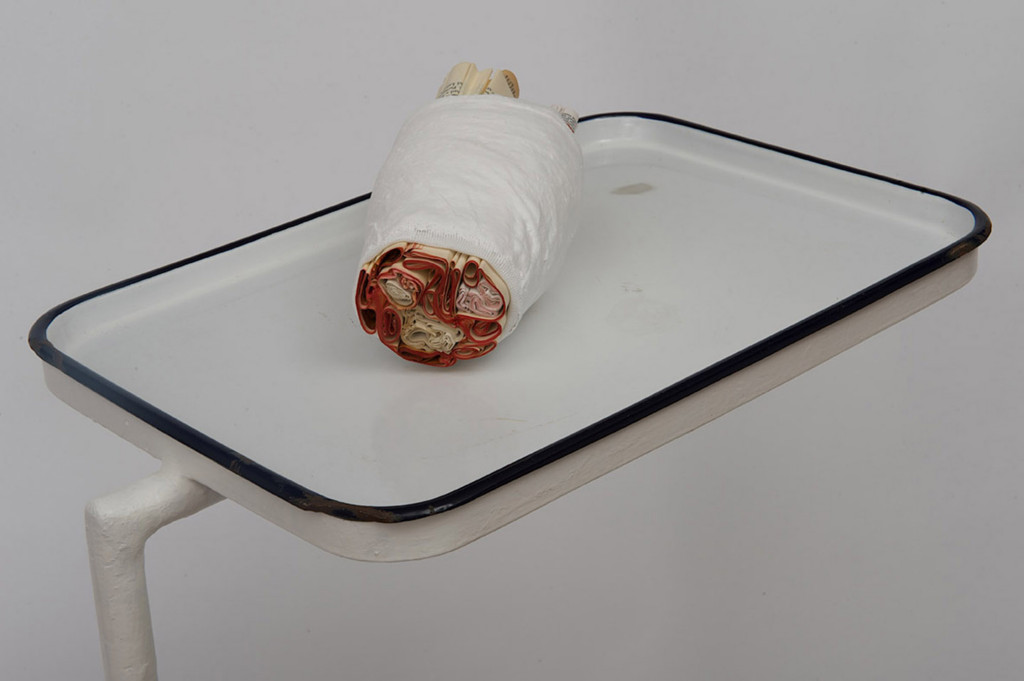 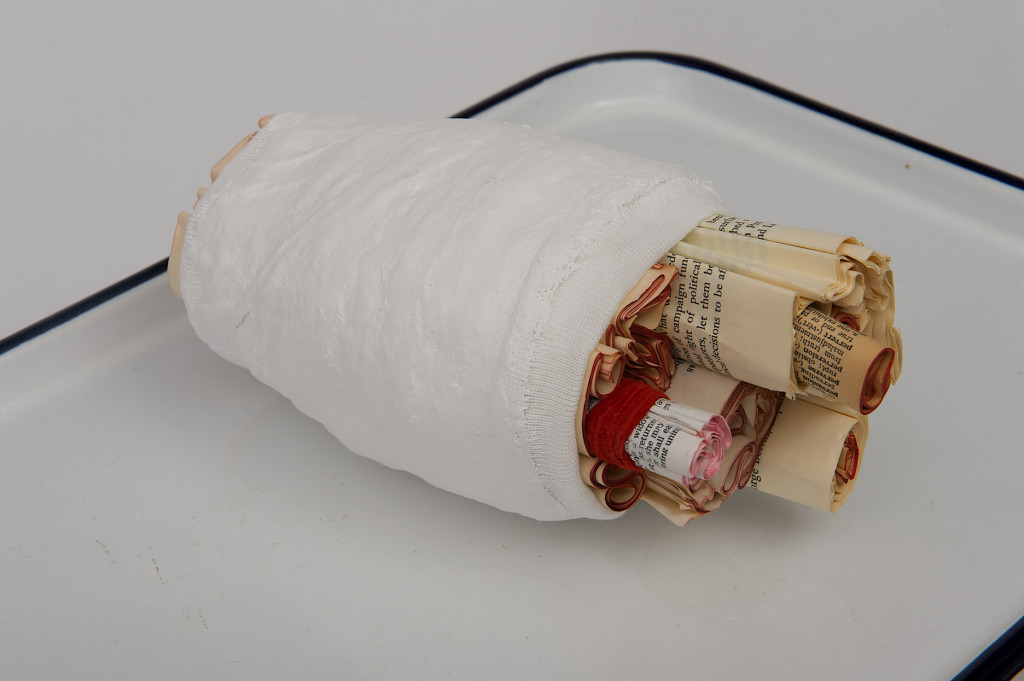 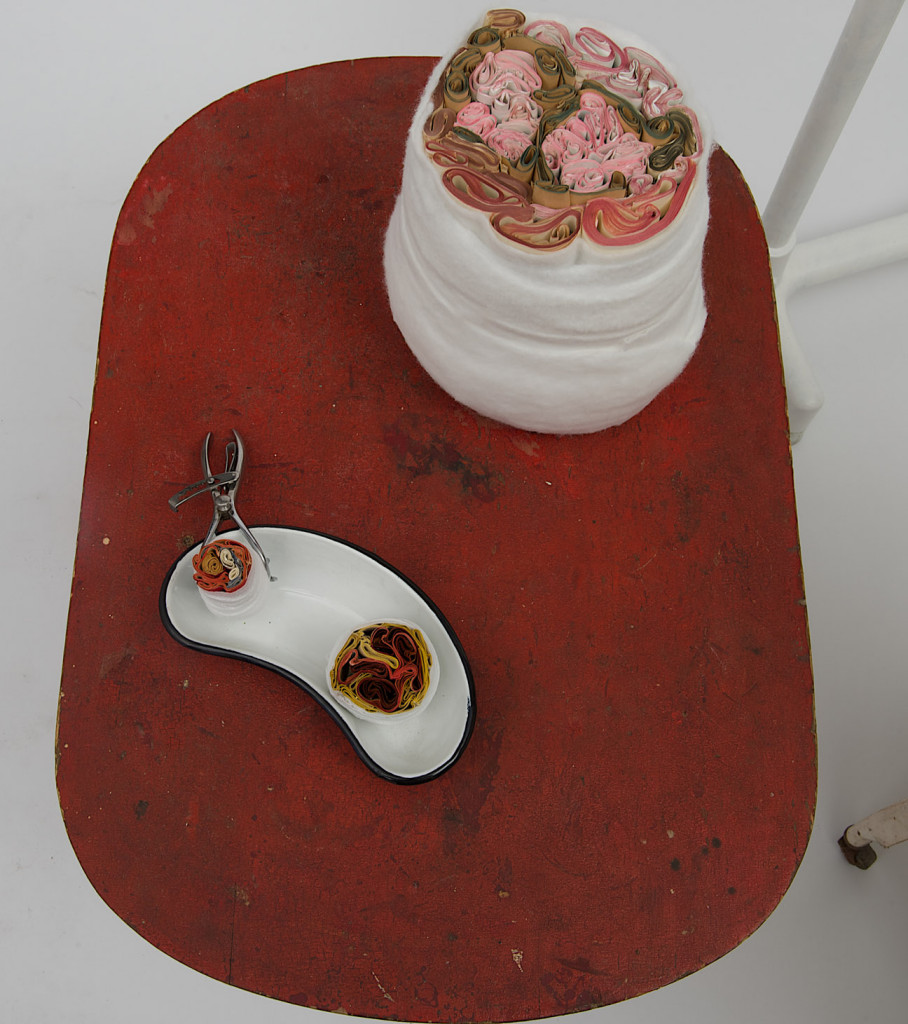 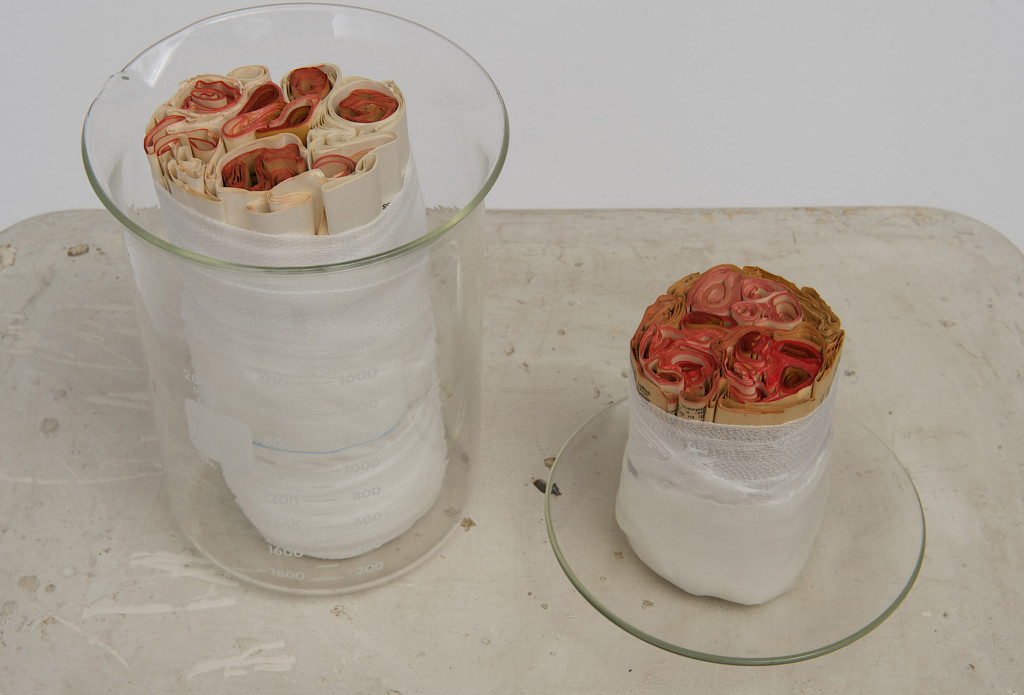 Cindy Stelmackowich is a Canadian artist, curator, and academic based in Ottawa. Her artwork has focused on themes related to medicine and anatomical science and is often linked to her academic research on anatomical atlases completed for her Ph.D. dissertation (Binghamton University, New York). In her artwork, Stelmackowich has questioned the methods and meanings of science; how science gets performed on the body; and how the languages of medical science operate. Her artwork often brings together diverse medical-related materials and found objects, including digitally combining photographic images. Stelmackowich has exhibited across Canada, the United States and Europe in solo and group exhibitions, and has received numerous grants from the Canada Council for the Arts, the Ontario Arts Council, and the City of Ottawa. View all posts with Cindy Stemackowich →