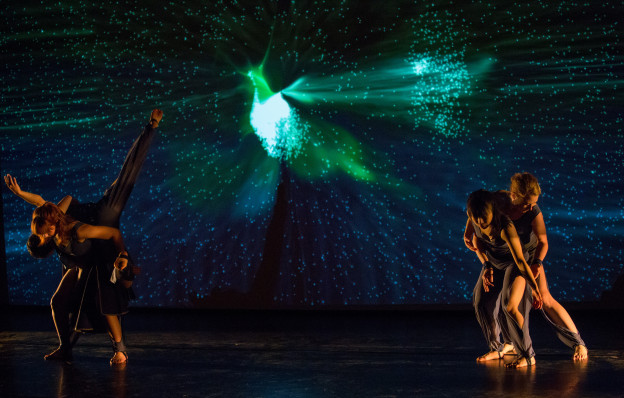 David Glowacki: Sure – my undergraduate degree from the University of Pennsylvania in Philadelphia is in chemistry, but I have lots of ‘minors’ – in philosophy, comparative literature, and mathematics. In fact, I wanted to study philosophy at university, but my father refused to provide me any financial support unless I studied a science. At the time I found this irritating, so my solution was essentially to study both. Near the end of my undergraduate degree, I applied to several PhD programs in chemistry, and was in fact all set up to go & study my PhD at Berkeley, in what would have probably amounted to a more conventional scientific pathway. But then – as I was making preparations to go to Berkeley – I was accepted to study my MA in cultural theory at the University of Manchester as a Fulbright finalist, so I put the Berkeley plans on hold, and instead went to the UK to obtain a year-long master of arts. Following my MA, I returned to science to study a PhD in chemical physics at the University of Leeds. After that I moved to Bristol, where I worked as a postdoc, and eventually obtained a Royal Society Research Fellowship. I’m also a visiting scholar at Stanford, so I split time between Bristol and Stanford at the moment.

DG: Imagery and visual metaphors are essential to effective scientific practice, because they enable a concise way to capture complex information, and also convenient ways to think about complicated natural systems. Scientific practice, like anything else, is ultimately a human endeavour, and as such, it relies on effective communication to make progress. Images are excellent ways to capture information, to guide our thinking, and to help us imagine domains which we cannot easily ‘see’ with our physiological sensory apparatuses. This is particularly important for domains of science which are beyond our human sense perception and therefore ‘invisible’ in some sense – e.g., the very domain of the very small: molecules, atoms, electrons, and even smaller. The mental representations that we form of these microscopic domains is closely linked to the imagery that we develop, and in fact forms our intuition for how they behave. In fact I would almost go so far as to claim that the imagery is the reality when it comes to microscopic domains. 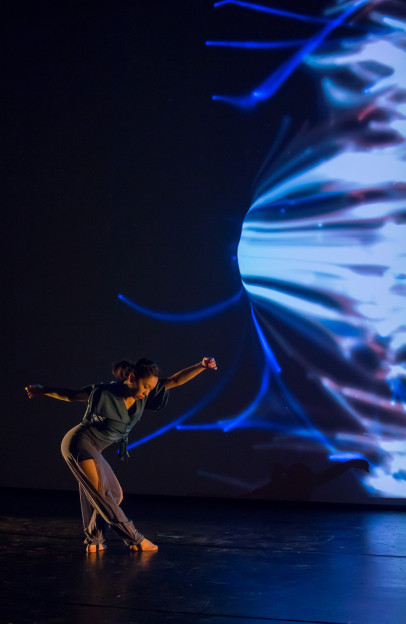 RB: Can you say something about the creative and material processes that lead to the images that we see in your gallery?

DG: I’m fascinated by dynamics – i.e, the fact that the entire cosmos, at every level of organization, is in perpetual motion. Richard Feynman famously said that ‘all of biology’ can be explained by the wigglings and jigglings of atoms. At the tiniest level, string theorists postulate that different particles found in nature arise from the vibrational dynamics of tiny string-like objects. Moving up from strings to a slightly larger level, quantum mechanics tells us that matter actually exhibits wave-like behaviour with specific vibrations, energies, and frequencies. Microscopic living systems such as cells exhibit vibrations that last anywhere from milliseconds to seconds. And on the largest scale of all, cosmologists think that the entire universe is still vibrating at frequencies excited in the Big Bang. Microscopically, the movement of atoms depends on the energy fields that they experience from the atoms that surround them. The photos that you see in this gallery arose from a simple idea: I know from my scientific training that atoms move because of the energy fields they experience… So if I could somehow model myself as an energy avatar, then would it be possible to for me to step into an atomic simulation, using my field to influence atomic motion? So myself and a talented set of collaborators designed a system that allowed us to do just that. We call the system ‘danceroom Spectroscopy’ (or dS for short), and it works like this:

1. You move within a space that is being tracked by depth sensors, which detect a 3d image of your body

2. The 3d images are sent to a fast purpose-built computer, which uses a mathematical transformation to interpret your 3d image as an energy avatar.

3. Your energy avatar is able to interact with a rigorous simulation of atoms moving according to the laws of physics. The whole thing – avatars and atoms – is projected onto a screen for you to see.

4. As you move, the computer detects vibrations that your energy field makes amidst the atomic bath, and uses this vibrational data to generate real-time sounds from your motion, which are amplified for you to hear.

5. The net result is that the motion of your energetic avatar is literally making the sounds and visuals that you see and hear.

The photos in this gallery, taken by photographer Paul Blakemore, are from a performance called Hidden Fields that we made in collaboration with a talented group of contemporary dancers. With their sophisticated movement vocabulary, they were able to control the atomic physics simulation with a high degree of precision. 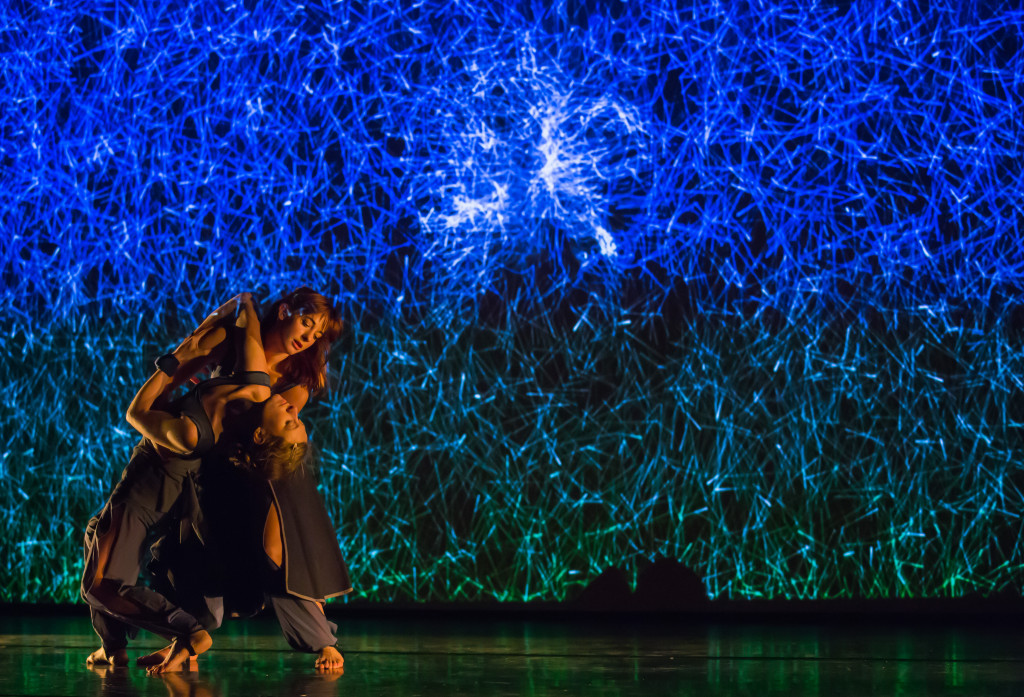 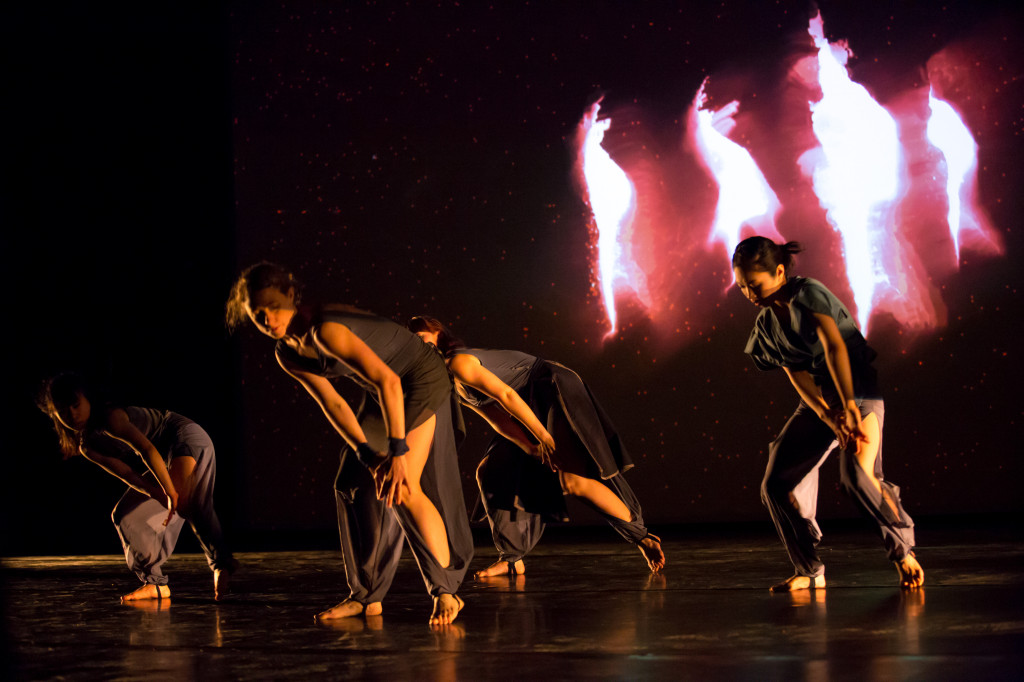 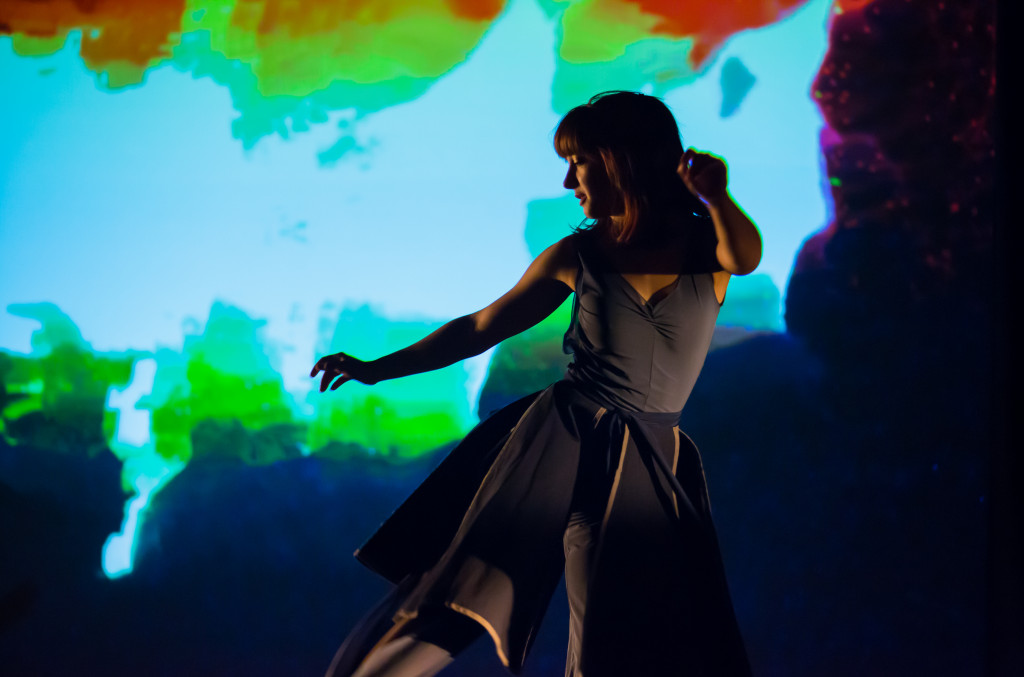 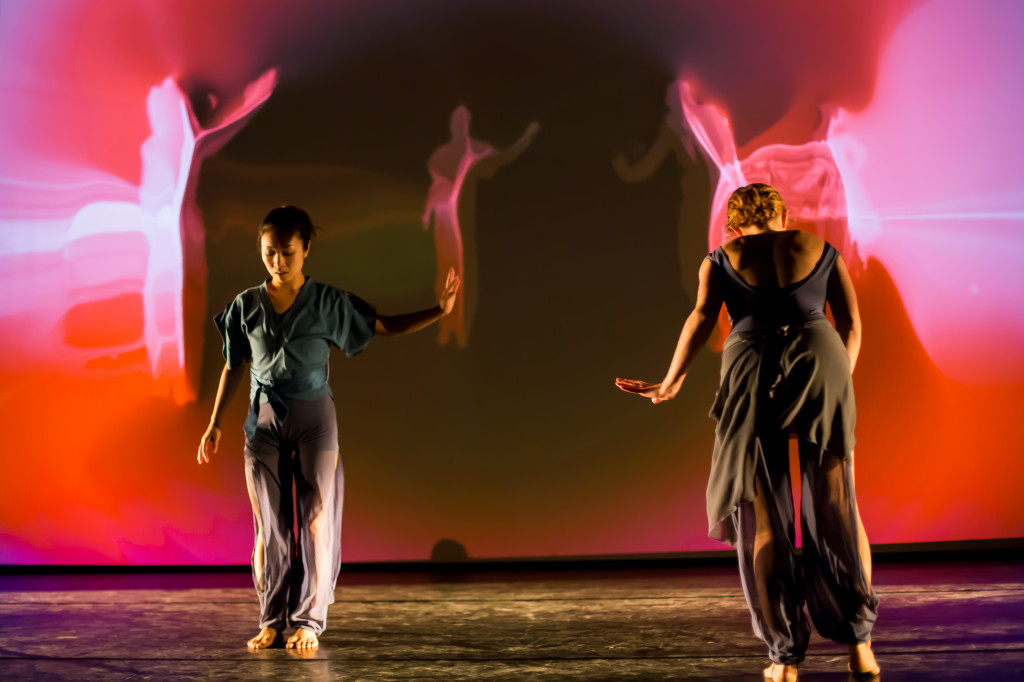 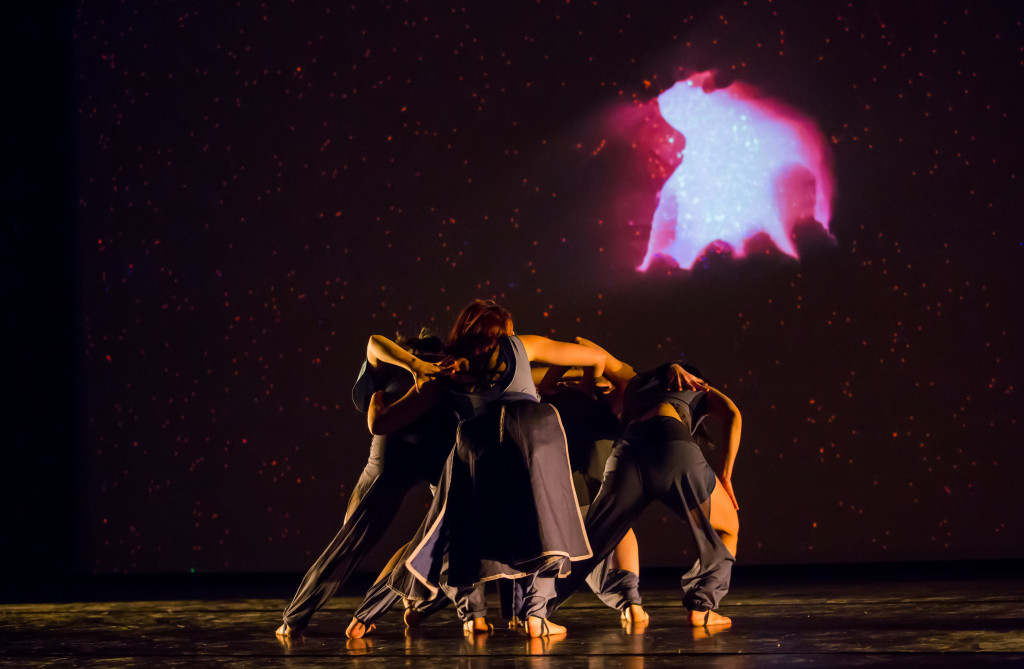 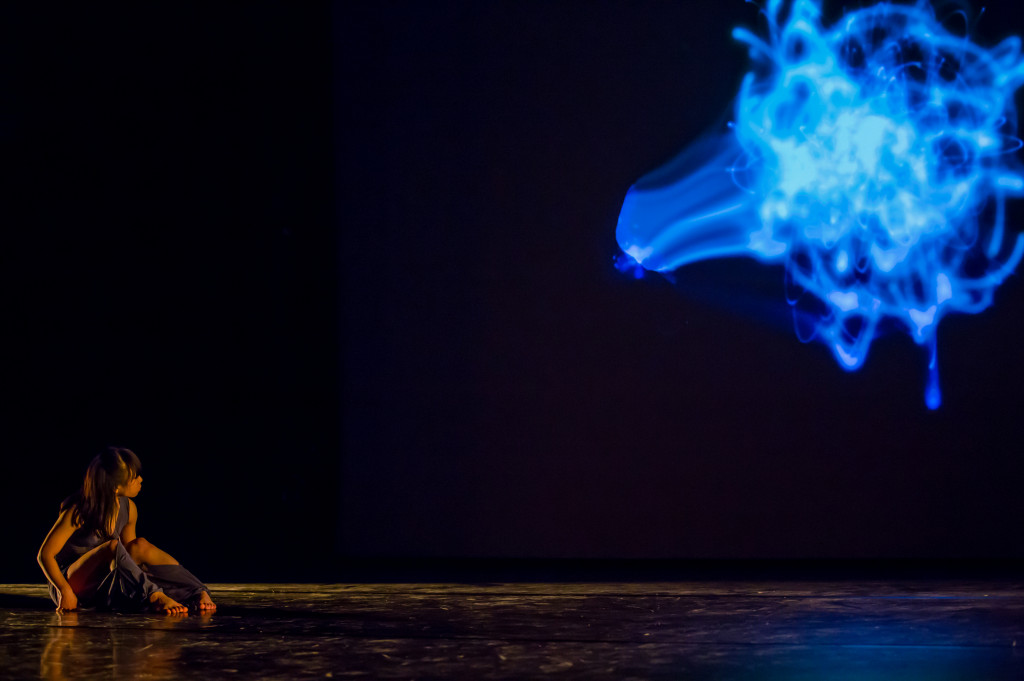 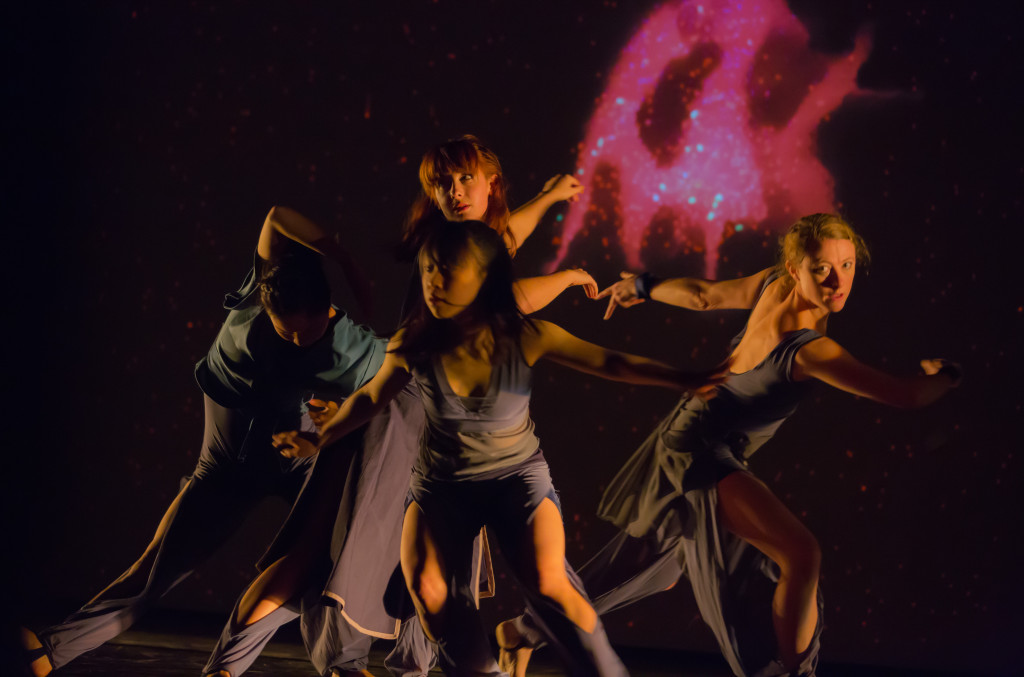 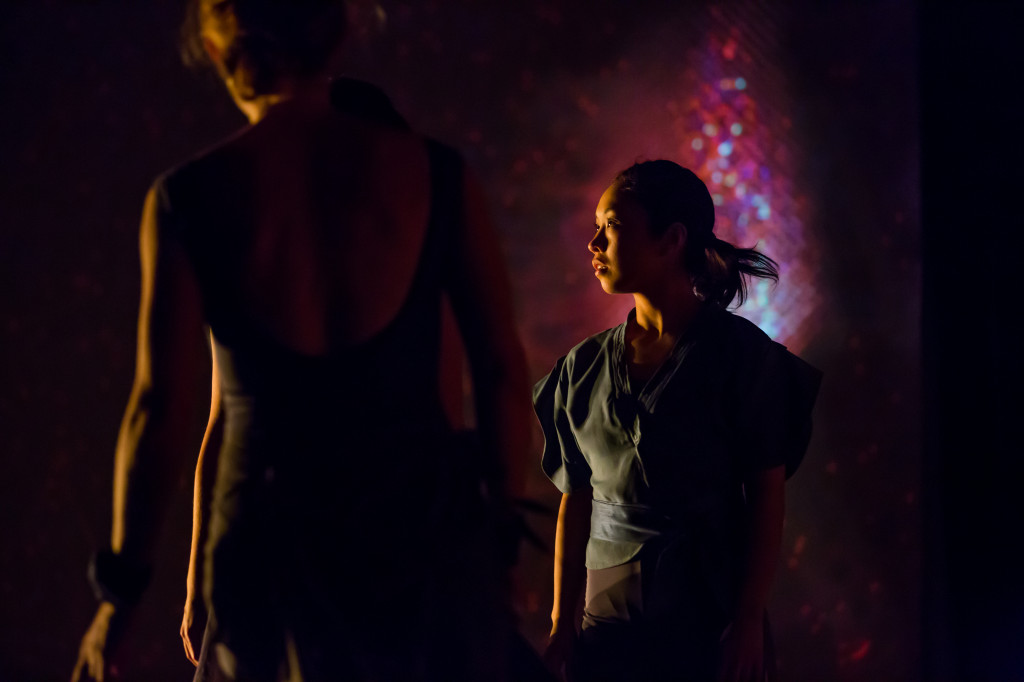 RB:  Imagery in science is primarily used to communicate findings and, in some sense, can be seen as being both ‘illustrative and ‘provocative’. Would you say that your images are ‘scientific’?

David Glowacki (that’s me) is a scientist, artist, and cultural theorist (www.glow-wacky.com). I have appointments as a Royal Society Research Fellow at the University of Bristol, and as a visiting scholar at Stanford. In Bristol, I head up an eclectic academic research group between the Centre for Computational Chemistry and the Department of Computer Science. I am also the founder of a Bristol-based tech startup company called interactive Scientific Ltd. (iSci), who specialize in developing interactive apps and virtual reality for molecular simulation and scientific education. I publish in several domains including: digital aesthetics, human-computer interaction, high-performance computing, evolutionary algorithms, religion & power, classical & quantum dynamics, biochemistry, atmospheric physics, and scientific instrument development. One of my projects is the multi-award winning ‘danceroom Spectroscopy’ art installation, which was used to construct the 'Hidden Fields' dance performance. Since 2011, these have been experienced by well over 100,000 people across Europe, the USA, and Asia, including venues like London’s Barbican, Germany’s ZKM, the London 2012 Olypmics, the Himalayan Arts Festival in Bhutan, and the Stanford University Art Institute. View all posts with David Glowacki →