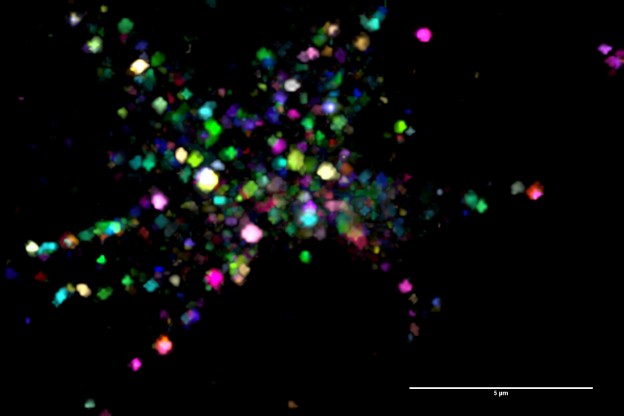 “Using a novel technique called single molecule translation imaging (SMTI), we were able to capture the synthesis from RNA to molecule of individual beta-actin proteins in real time inside the axon of a developing neuron. Each colour represents hereby a different time-point during acquisition.” (Florian Stroehl)

Florian Ströhl is a bio-photonics PhD student at the University of Cambridge, UK, working in the Laser Analytics group (http://laser.ceb.cam.ac.uk/) of Prof. Clemens Kaminski.

His main research interest is in the development of superresolution microscopy, a novel field of optical microscopy that increases the achievable resolution beyond conventional limits. Equipped with such imaging tools, he is involved in studies on neuronal growth on the molecular level and investigations on neurodegenerative diseases like Alzheimer’s, Parkinson’s, and ALS.

Before his PhD at Cambridge, Ströhl studied medical engineering and optical technologies at the University of Erlangen-Nuremberg, Germany, and graduated as M.Sc. with honours. 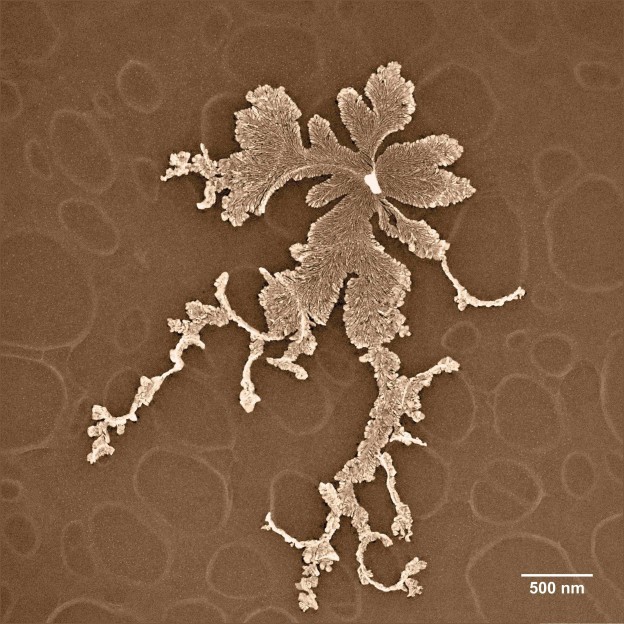 “Growth of gold nanocrystals within DNA extracted from salmon sperm.  This is electron microscopy image of the growth two months after the addition of the precursors to DNA. The growth of the material is usually stopped after few hours. However, this one left to grow much longer to investigate the shape directing ability of DNA. Such gold-DNA hybrids were successfully used to design a prototype of bio-hybrid memory device.” (Ljiljana Fruk. Image copyright Lj. Fruk.) 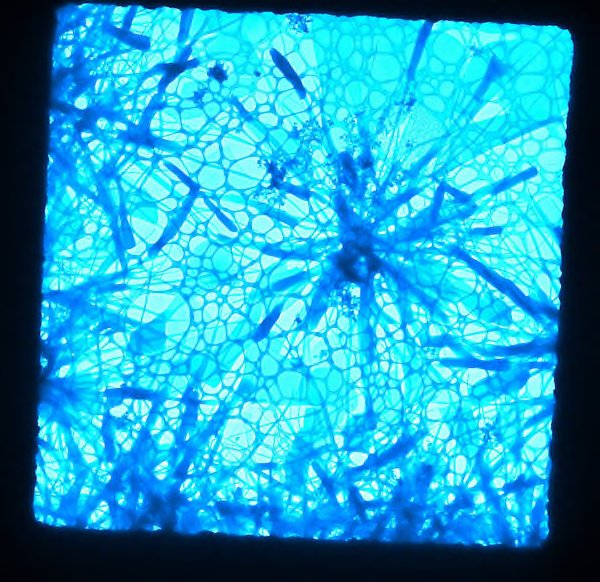 “Growth of titanium dioxide nanorods, which can be used in photocatalysis. The second stage of rod formation, just after the formation of initial seeds is captured by electron microscopy.” (Ljiljana Fruk. Image copyright: Lj Fruk, Marko MIljevic.)

Ljiljana Fruk has studied chemistry at University of Zagreb and obtained her PhD in biospectroscopy from Strathclyde University, Glasgow. She then worked on various research projects concerning DNA nanostructuring, artificial enzymes and nanomaterials preparation in Germany, before establishing her own group at Kalrsuhe Institute of Technology, Karlsruhe. After 10 years in Germany, she  joined University of Cambridge, Dept. of Chemical Engineering and Biotechnology as a lecturer in bionanotechnology last year. Her group is working on design of hybrid materials for nanomedicine, development of light triggered chemistry and nanoparticle synthesis. She is also active in popularisation of science, in particular through various art-science projects such as Future is Here exhibition (ZKM, part of international art science event Globale, Karlsruhe, 2015-2-16) or Molecules that Change the World 3d Installation (Technical Museum Zagreb, 2016). She is also a co-author of Molecular Aesthetics (with Peter Weibel, MIT Press 2013) and wanna-be SF writer. 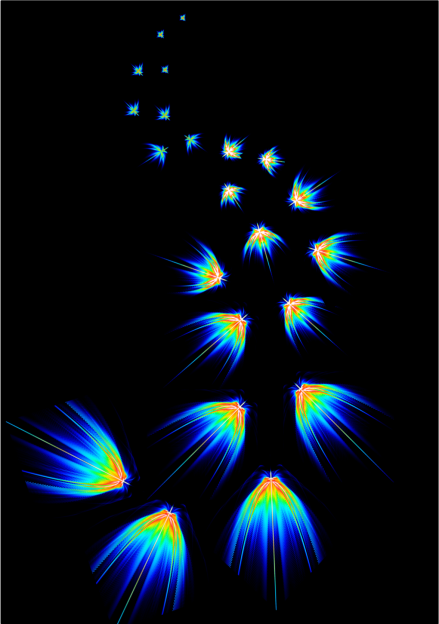 “This image was inspired by a journal cover article on molecular dynamics studies using 2D-LIF (2-dimensional laser-induced fluorescence). It aims to convey the feeling of the tumbling of fluorobenzene molecules as they expand into the vacuum chamber.  It uses the calculated fluorobenzene energy pattern to show how the pattern is condensed as the molecules are cooled from room temperature to near absolute zero. The experimental apparatus cools the sample gas down to very low temperatures so that by the time the sample molecules intersect with the laser, they have reduced their rotational and vibrational energy significantly.” (Ula Alexander) 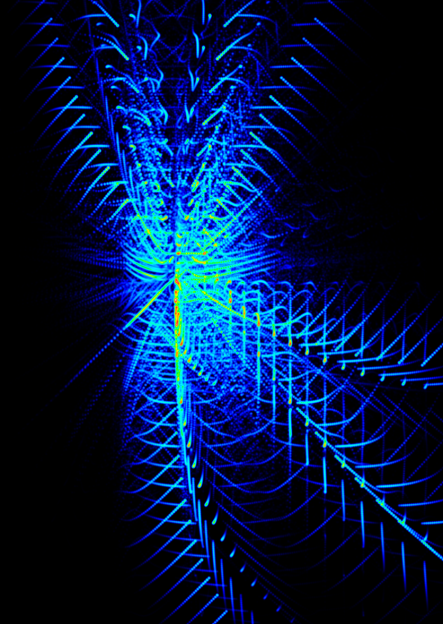 “This image shows one of the patterns made by the energy changes in the molecule p-fluorotoluene as the methyl group twists against the central ring structure while the ring vibrates. Quantum physics rules dictate the detailed structure of this 2-dimensional fluorescence image.” (Ula Alexander)

Ula Alexander has trained as a researcher in chemical physics having completed a PhD and post-doctoral work in the Laser Spectroscopy and Molecular Dynamics Lab at Flinders University, South Australia.  Her interest in science-art has grown from experiments in the lab where energy patterns are collected from molecules interacting with laser light.  Seeing molecules reveal something of themselves through intricate patterns determined by the laws of quantum physics is fascinating and from a chemist’s point of view, it is always an interesting challenge to visualise molecules and their behaviour.  In order to share the hidden world of molecules with others, Ula has organised exhibitions of art works based on energy patterns recorded experimentally in the lab and from quantum simulations (www.quantumconversations.net). 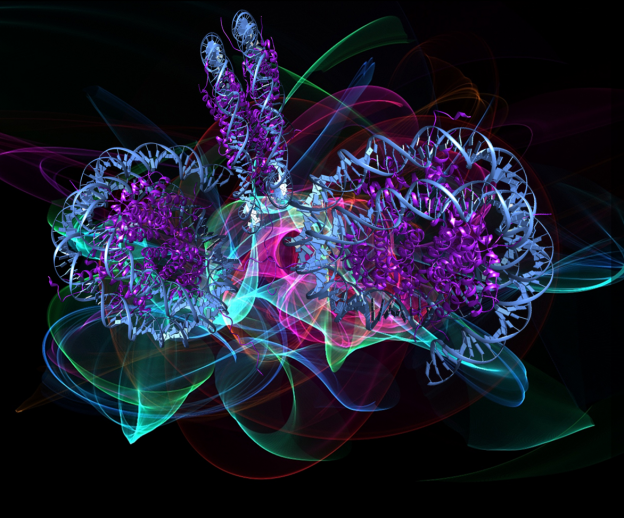 “I downloaded the coordinates of this protein/DNA complex from the Protein Data Bank (I think the ID is this one:  4QLC. Crystal structure of chromatosome at 3.5 angstrom resolution). Then, I prepared a few pictures of the modified complex using the UCSF Chimera package (Chimera is developed by the Resource for Biocomputing, Visualization, and Informatics at the University of California, San Francisco (supported by NIGMS P41-GM103311). UCSF Chimera–a visualization system for exploratory research and analysis. Pettersen EF, Goddard TD, Huang CC, Couch GS, Greenblatt DM, Meng EC, Ferrin TE. J Comput Chem. 2004 Oct;25(13):1605-12). Finally, using powepoint I created a sort of flower combining different pictures and adding a background.” (Susanna Monti, Research Scientist) 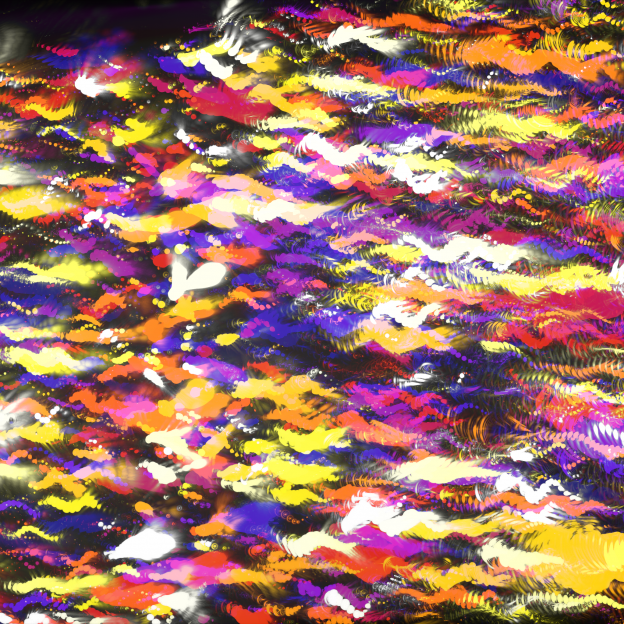 “This is a static representation of fluorescent nano-beads tumbling and diffusing through the focal plane of my light sheet microscope. Each frame of the video was colour coded and the video was then summed to create this single image.” 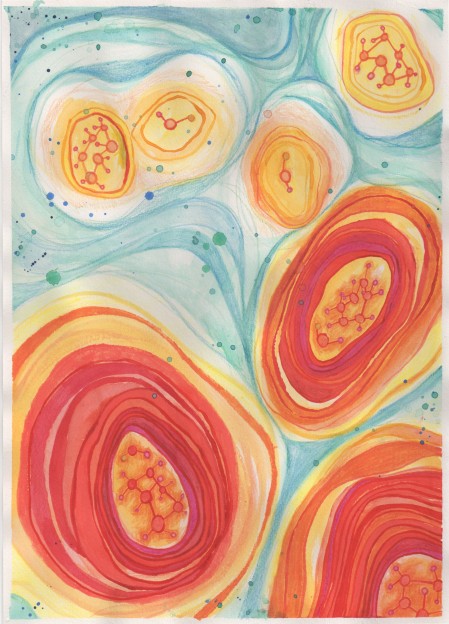 “This image shows an artistic impression of the flow of energy in the wake of a bimolecular reaction between cyclohexane and the cyano radical in a liquid. This reaction was the subject of publications in Science (2011) and also Nature Chemistry (2011). These studies showed that chemical reactions can lead to molecular products which are locally “hotter” than the liquid in which they are embedded. The colours in the image indicates how fast energy flows from the hot molecular reaction products to the surrounding liquid. High intensity colours indicate fast energy flow, while less intense colours indicate slower energy flow.” (Becca Rose)

Becca Rose is an artist, designer and educator. She makes playful work at the intersection of folk crafts, illustration and technology. She is currently studying an MA in Design at Goldsmiths, and a resident of Makerversity, Somerset House.