Six paintings were created for the “Art of Systems Biology and Nanoscience,” organized  in 2014 by the University of New Mexico and Los Alamos National Laboratory at 333 Montezuma Arts in Santa Fe. The paintings capture different aspects of the active transport of molecules in and out of living cells. Membrane-enclosed vesicles are widely used as the containers for shipping molecules, and a diverse collection of dedicated molecular machines provide the motors for moving them and ensure that deliveries are made at the proper time and place.

Each painting, rendered in watercolor and ink, simulates a cross section through a cell, showing the membranes, proteins, and nucleic acids drawn at a consistent magnification of 2,000,000X.  The spaces between the molecules are filled with many small molecules and water, which are not shown. The illustrations are based on experimental data from a variety of sources, including molecular structures from x-ray crystallography, proteomic information, and cellular ultrastructure from electron microscopy. 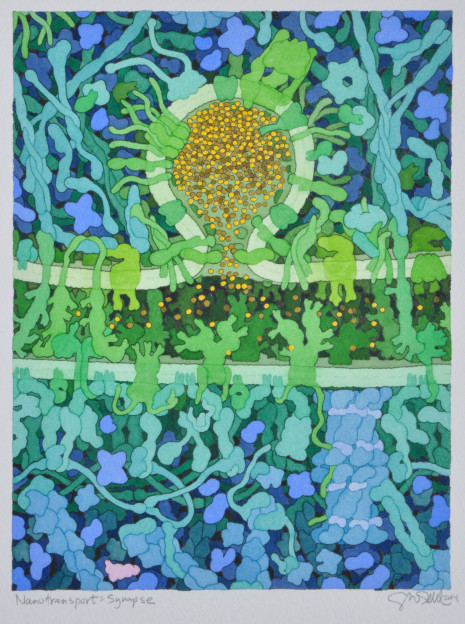 Nerve cells communicate with their neighbors by releasing small neurotransmitter molecules, shown here in yellow. The neurotransmitters are stored in membrane-bound vesicles, which fuse with the nerve cell membrane and release the neurotransmitters into the narrow cleft between cells. The signal is received by receptor molecules (in green) on the neighboring cell membrane. A complex infrastructure of proteins in both cells (shown in blues) makes sure that everything is in the right place. 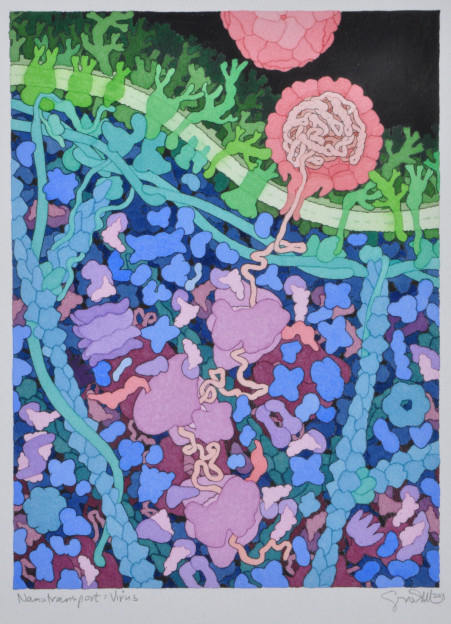 Rhinovirus, one of the viruses that cause the common cold, is captured in the process of infection. Two viruses are shown at the top in red. The lower virus has attached to receptors on the cell surface (green) and is injecting its genome (pink snake-shaped molecule). Inside the cell, ribosomes (magenta) are translating the viral genome into viral proteins, which will ultimately hijack the cell to create new viruses. 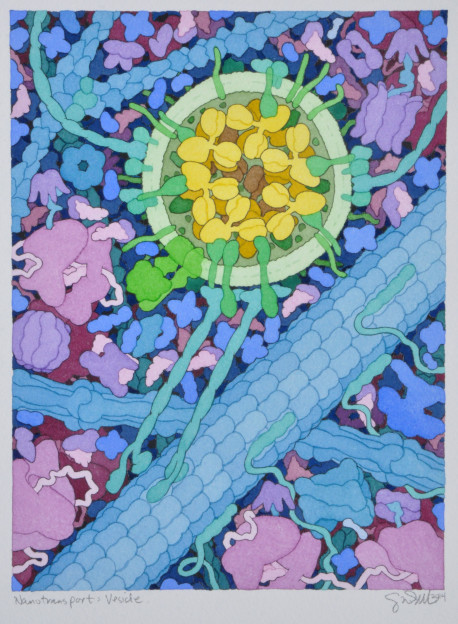 Molecules are transported inside cells in membrane-enclosed vesicles, such as the one shown here at the top. This vesicle includes a load of antibodies (in yellow) that is being delivered to the surface of this white blood cell, for release into the bloodstream. The vesicle is pulled along long microtubules (extending diagonally through the picture) by kinesin motors. 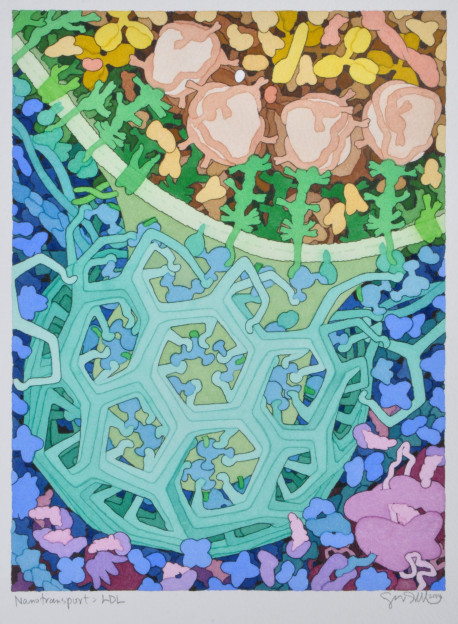 Fats are transported through the blood in large containers, such at the low density lipoproteins (LDL) shown here at the top. They are bound to receptors on the cell surface (green) and pulled into the cell in coated vesicles surrounded by clathrin (three-armed protein in blue). Insulin (white egg-shaped molecule at upper right) binds to receptors on cell surfaces (in green) and has many effects that modify the metabolism of glucose. Here, a vesicle with glucose transporters has fused to the cell surface, increasing the flow of glucose into the cell. 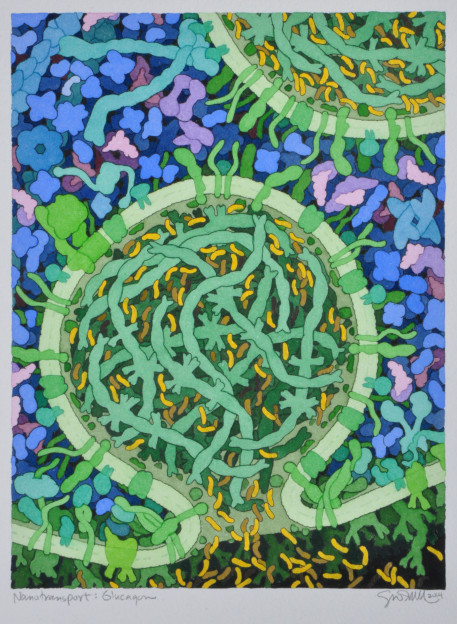 Hormones like glucagon (small yellow molecules) are stored in large vesicles, and released when the cell receives the appropriate trigger. The V-shaped molecule at upper left is a myosin that delivers the vesicle to the cell surface. The large green molecules in the vesicles are chromogranins that assist in the storage and release of the hormone.

More information on my paintings is available at my WWW site: http://mgl.scripps.edu/people/goodsell

David S. Goodsell is a Professor of Computational Biology at the Scripps Research Institute and Research Professor with the RCSB Protein Data Bank at Rutgers University. His research uses computer graphics and simulation to explore structure/function relationships in key biological systems. Current research projects are focused on exploring the structure of entire genomes in bacterial cells and mitochondria, and functional mechanisms of HIV budding and maturation. Science education and outreach is also a strong focus of his laboratory. He is author of the Molecule of the Month, a feature at the RCSB Protein Data Bank that presents the structure and function of a new molecule each month, and several illustrated books on biological molecules, their diverse roles within living cells, and the growing connections between biology and nanotechnology. More information may be found at: http://ccsb.scripps.edu/goodsell View all posts with David Goodsell →