Emma Tuck: I have been creating and making since I was a child. Both my parents were creative people in their own ways, and it was just assumed that I would busy myself drawing and making things. They also took the time to introduce me to art, music, literature and the natural world. I later took A level art – I was fortunate to have had an excellent teacher in printmaker Myrtle Pizzey – and considered going to art college. However, at the time, the idea that someone from my background could pursue a career in art seemed out of the question. Instead, I studied English at the University of Leeds and went on to work in publishing, although I continued to draw, paint and sew.

I began to take my artwork more seriously when my partner and I retreated to a dilapidated smallholding 1,000 foot up a mountain in West Wales in 2003. I now had more time and mental space. It has become something of a cliché in recent years, but living in such a special spot cemented the importance of place in my work. Our 25 acres of land bordered the Cefn Blaenau special site of scientific interest, so we benefitted from a relatively intact and diverse mosaic of unimproved pasture, marshy grassland, wet heath and broadleaved woodland. By the time we left 12 years later, we had added three large ponds, planted around 4,000 trees and transformed the sheep-sick land into a nature reserve which was attracting birds, otters, dragonflies and many other wild lives. This was a major creative endeavour – I don’t think anything else I do will ever match it. 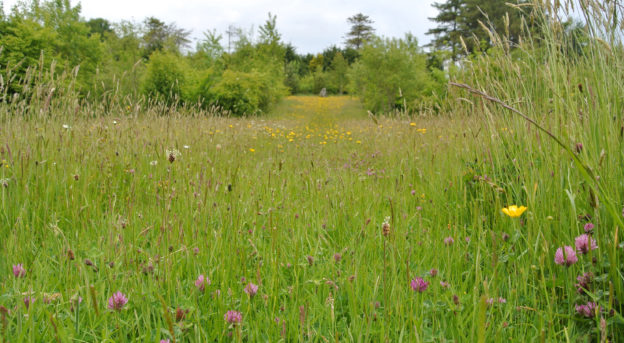 ET: During my time in Wales, I began producing pen drawings documenting the native plants growing around me. I worked in black and white (and mostly still do), enjoying the democratic simplicity of pen on paper. The drawings were quite stylised and I adopted an ecological approach, creating densely packed portraits of entire plant communities including wildflowers, grasses, ferns, mosses and lichens. The drawings that emerged led to my first exhibition ‘Microcosm’ at the National Botanic Garden of Wales in 2008 and to associate membership of the Society of Botanical Artists in 2011.

My work was influenced by printmakers such as Robin Tanner (particularly his illustrations for Woodland Plants) and Colin See-Paynton (I was impressed by his ‘An Avian Alphabet’ exhibition at MoMA Machynlleth in 2009). I also loved Charles Rennie Mackintosh’s pencil and watercolour paintings of flowers which are beautifully composed and luminously painted. I came across Michael Landy’s ‘Nourishment’ etchings of weeds in the Tate some years after his original solo show, and this also fed into my thinking. 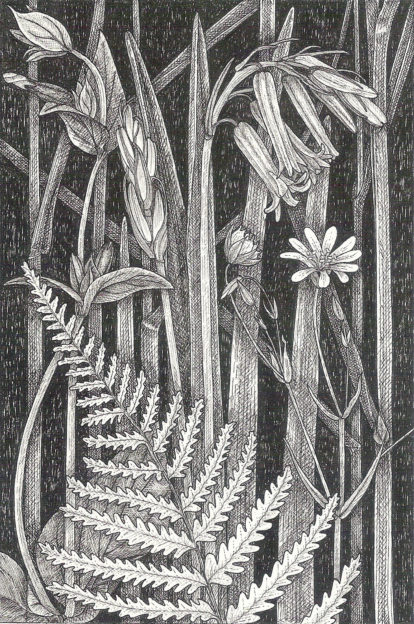 ET: When you are looking closely at the world it is impossible not to see damage and – if you have some understanding of what you are looking at – absence, so increasingly my work is motivated by the catastrophic impact of human actions on the natural world. I am inspired and appalled in equal measure by what I see around me. As a result, I have begun to create more stark images which are provoked as much by feelings of anger and loss as they are by beauty and wonder. I am trying to convey something of the psychic distress which living in such a devastated and unnatural habitat does to us as animals. These have included a series of drawings of trees mutilated by barbed wire and a hazel hedge ripped apart by a flail. There can be a repetitive spikiness to the physicality of drawing which can hold some of this anger, but Rotring pens are notoriously unforgiving so there needs to be gentleness too. 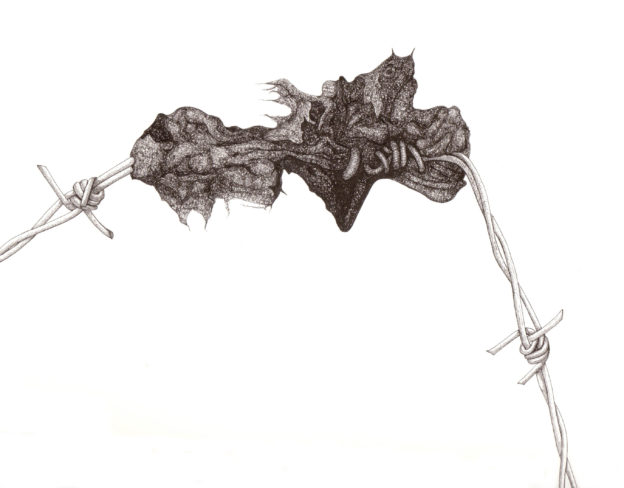 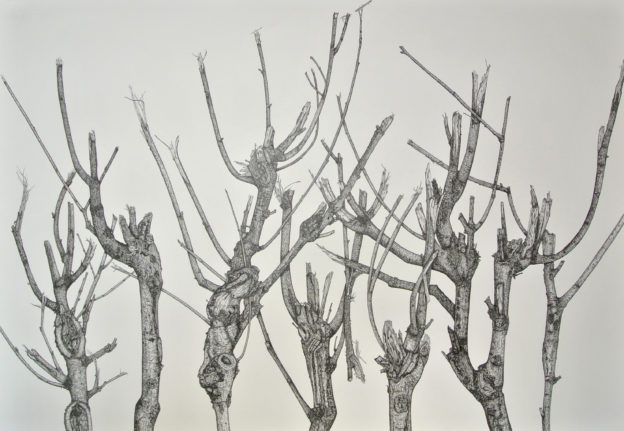 RB: Your ‘De|Code’ work was inspired by research at the National Botanic Garden of Wales to DNA barcode the native flowering plants in Wales. Can you say more about this?

ET: I met Natasha de Vere, head of science at the National Botanic Garden of Wales, in 2010. She was already spearheading art/science collaborations based around the Garden’s work to DNA barcode the UK’s native flowering plants – each plant is being sequenced to generate a unique code so that fragments of pollen, root or leaf can be identified.

For the project, we homed in on four scarce native species from the garden’s Rare Welsh Plants Project: spreading bellflower (Campanula patula), meadow thistle (Cirsium dissectum), whorled caraway (Carum verticillatum) and an endemic whitebeam (Sorbus leyana). The aim was to create a personal portrait of each plant through a series of relief prints, collages and artist’s books, which abstracted and reinterpreted the shapes of flower parts, leaves, stems, twigs and berries. A visual motif of the DNA barcode of each plant (made up of the bases A, G, C, T) was also woven throughout the exhibition.

There is a risk with botanical work that you end up with a pretty picture of a plant – which, of course, can be skilful, striking, poignant and exuberant. It was important to me that this work had rigour. The process required a conceptual dismantling and remaking of the visual and genetic components of each plant in order to tell the story of its history and form. All four plants are rare in the UK, so the work was also intended to be seen as part of the bigger picture of the sixth extinction – thousands of plants and animals becoming extinct due to the pressures of habitat loss and climate change. I hoped that, by finding new and unusual ways of looking at these plants, we might come to think differently – and more urgently – about their loss. 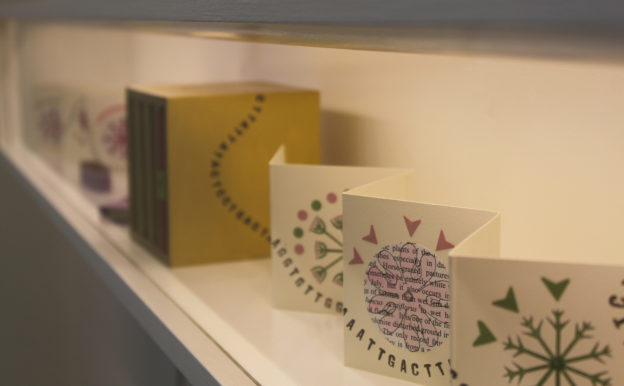 RB: Your series ‘Sight|Unseen’ focuses on trees. Can you say more about this work?

All images copyright and courtesy of Emma Tuck

I am a self-taught artist and have been creating and making since I was a child. Today I am working with paper, print, paint, ink, pen and pencil; this will inevitably shift and evolve. My work is informed by natural forms and patterns – spirals, fissures, branches, waves, plants, landscapes. But it is not about faithfully representing the natural world. It is about nature as it appears to me – inevitably refracted through the psychological, the political and the trivial. As I observe the world around me relentlessly wounded by human activity, I try to capture a trace of its extraordinary beauty. I was born in Bristol and now live in Somerset. I spent many years in-between living on an organic smallholding/nature reserve in West Wales which has had a major impact on the importance of place in my work. I was awarded associate membership of the Society of Botanical Artists in 2011. Many of my prints and drawings are for sale – please contact me by email if you would like to buy any of my work. I am also happy to consider projects or commissions that complement my interests. View all posts with Emma Tuck →