Sarah Sutton: I was born in the Appalachian coal-mining region of Northeastern Pennsylvania and lived there for the first 11 years of my life. The town that I grew up in rests over flooded anthracite coalmines.  Culm piles and overgrown coal breakers dot the hills and mountains. I then moved to a suburb of Cleveland, 10 miles from one of the biggest, and now ranked one of the most dangerous power plants in the world. The cooling towers overtook the landscape. Both places had a monumental environmental threat, yet life marched forward. These early visual landscapes had an impact on my paintings and ideas.

I have a BA in Humanities from John Carroll University. My self-designed degree focused on ‘Contemporary Thought’, which allowed me to combine my interests in continental philosophy, literary theory and art history. After my undergraduate studies, I headed to California with the intent of going to film school, but switched paths and went back to school to learn to be a painter, and eventually got my MFA in Painting from Kent State University.

I connected with painting because I wanted my hand to be more involved in the process of creating than film would allow. However it was a long road to acquire the skills that would allow me to ’think’ through my hands. 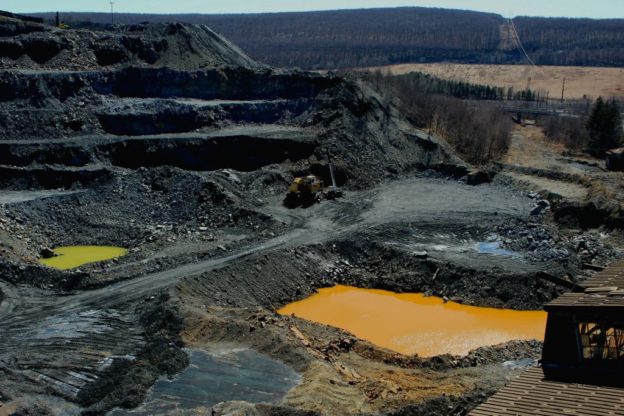 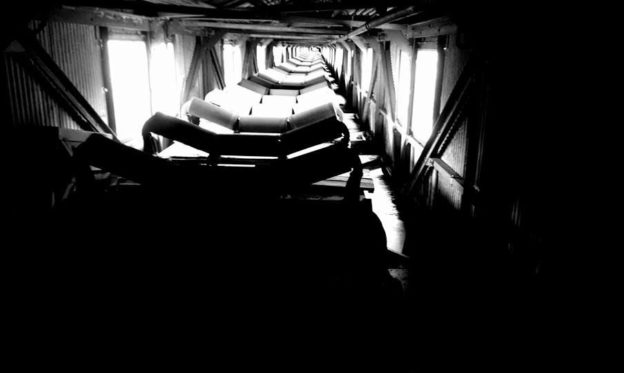 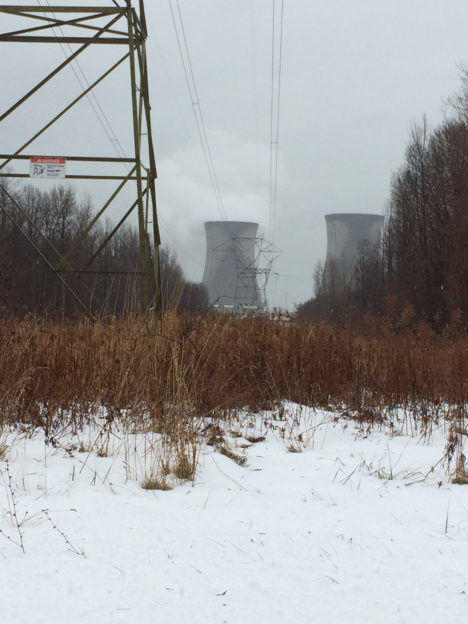 SS: In college, I always argued that I studied philosophy through making- at that time it was experimental film. One of the most significant influences in this regard has been the works of Gilles Deleuze, who I began reading 20 years ago as an undergraduate. Particularly impactful was the idea of creative ontology, which has roots in Nietzsche’s notion of the artist-philosopher. From this perspective, creative work is not a model or illustration that supplements life’s big questions, but can be thought of as the most direct and authentic vehicle to interact with new ways of “being”. The ‘new’, as created through visual art, exists outside of the confines of language structures, and as such can make us aware of the limits of what we know, and even overturn previously held paradigms and categories.

Another influence was teaching two-dimensional design. My first full-time position as a college art professor was in a design heavy art program. I taught three levels of two-dimensional design three quarters a year, for three years. That is 27 classes. I am now a painting and drawing professor primarily, but those three years taught me so much about gestalt theory and visual perception. They, combined with my previous studies in continental philosophy, and gave rise to my current interest in Interface Theory and vision science, which I’ll discuss later. Specifically, I’m really interested in how the brain constructs space and time.

SS: I believe visual perception supports short-term evolution, rather than long term. We all move out of the way for oncoming traffic. However phenomena that are not visually threatening often go undetected. Examples are very tiny things such as bacteria or viruses, as well as very large or multi-faceted and complicated systems such as global capitalism and climate change.

Due to our limited perceptual interface, I think we navigate a multifaceted, symbiotic, multi-temporal, global, intertwined complex world wearing perceptual filters. We are attached to visual conventions in images that support this interface as, such as linear perspective and gestalt principles, but these visual templates just like grammar in language can reinforce thought patterns and power structures of knowledge that are often not always useful, and may be at times completely false.

In the famous illustration by Rudolph Franz Zallinger, “The Road to Homo Sapiens,” in F. Clark Howell’s “Early Man” (Time-Life Books, 1965), the visual diagram employed the visual devices of gestalt principles such as continuity and law of common fate. The content implicit in the image, that evolutionary progress was simple and linear, overrode the content of the article and distorted some of the basic premises of evolution that were described right next to it in the accompanying text. Howell knew it was an oversimplification and warned that it wasn’t accurate, but most people can recognize the illustration, and few have any idea that it’s not consistent with evolutionary theory.

When I am constructing an image for a painting, I attend to the complexities that are often excluded from images. I imagine in-between spaces, scalar fluidity, and what I call psychic spaces, where the private and public realm collapse, short-term comforts and long-term consequences are married, and histories and genealogies whose boundaries and borders dissolve and reappear in unexpected places. I’m really trying to dissolve the skins, barriers and delineations that limit our perception. The process is almost like a thought problem that starts with the question “what would it look like if…?” Most of the time the question centers on combining spaces or moments that aren’t meant to go together, letting them collude, collide and clash and then looking for pattern, resonance and schematic visual structures that emerge as I paint. I use various types of modelling and filtering tools, from analogue and digital collage, to model making. For example, I designed a model stand for the purpose of building studies for my paintings, an analogue Photoshop that allows me to layer images and objects. I am also working with Michael ‘Bodhi’ Rogers, a physicist at Ithaca College to create 3D maps of images, whereby the values will represent relief giving it physical depth. These will likely make their way back into the images as another integrated layer of information, rather than being a piece in and of itself, as do most of my experiments. 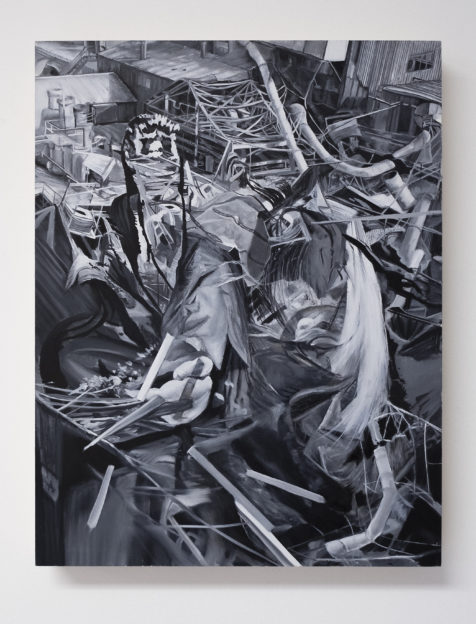 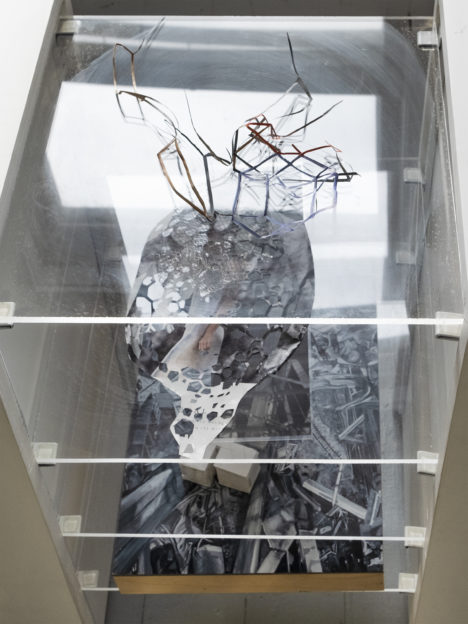 RB: Can you say something about your recent project with Daniel Graham which explores eye tracking? 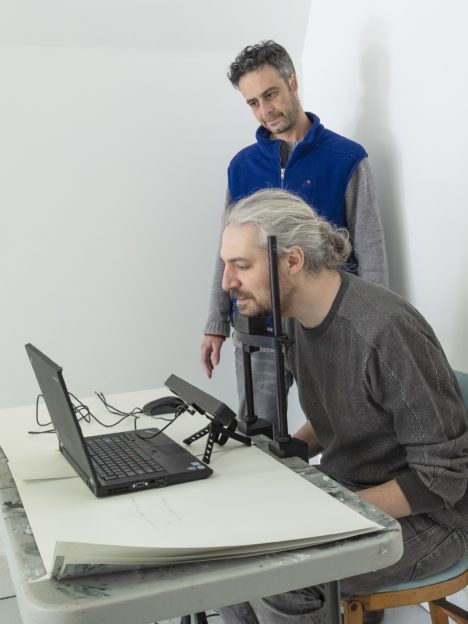 SS: Dan Graham is neuropsychologist whose research centers on principles of efficient processing of natural scenes, artwork, and faces in the visual stream, models and mechanisms in neuroaesthetics and network dynamics in the neocortex and at the whole brain level. I met Dan through mutual connections, as our four-year-old daughters take ballet together.

I found his research was an interesting compliment to my art practice. When he suggested doing some eye tracking of my painting, I was intrigued. I was curious to find out if there is a general direction that the eye travels through my work and how the viewer’s eye navigates the shifting figure/ground relationships, scalar distortions and visual distractions.  There are hidden figures and objects, and I wondered how quickly the eye finds them, if at all.  Vision is task-based and gravitates toward purpose, and immediate usefulness to the organism, but in my work, any perceived or assigned task is based on which path the eye takes through the painting. Based on our initial data and viewer feedback, this visual path varies widely.

For instance, during a recent studio visit with my friend Werner Sun, who is a physicist and artist, we stood in front of one of my paintings and talked about the imagery. After several minutes, I realized he did not see that there was a figure literally in the center of the painting. Other people have seen this right away. Once it is recognized, the eye takes an entirely different journey. In short, using eye tracking to map the visual path helps me understand how others are looking and how meaning unfolds, giving me more ideas to explore.

Another interesting outcome was learning how the spatial and scale cues seem to override pretty straightforward representation of objects. During the eye tracker project, one subject said that she thought particular forms looked like buckets of oil, but that she knew that they were jars because of their size. That part of the painting was of an image of an oil spill, complete with buckets of oil, and was actually scaled accurately. Surrounding it, however, were very different scaled objects from a very different implied viewing distance. The expectation of scale and the desire to homogenize the scene overrode her intuitive and more accurate knowledge.

Based on the data from this project, I am working on a series of drawings and data maps of 6 subjects who looked at digital images of my paintings using the eye tracker, and the same 6 subjects who looked through a plexiglass pane at the actual painting and hand drew the path that they thought their eye was travelling. In the drawings, I am thinking about collective vision. When there is a complex problem or something that is not as naturally fitted to human perception, we need help, whether it is with the electron microscope, an artist’s vision, or other people’s visual interpretations. There are times when we literally need to see more than we can see with our own eyes. Perhaps picturing vision collectively can make us aware that multiple perspectives allows us to see more, which may influence our ability to solve complex problems and subsequently aid in our long-term survival. 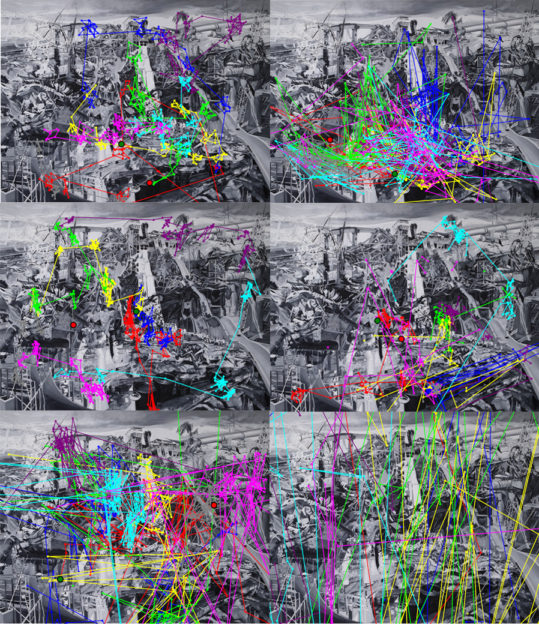 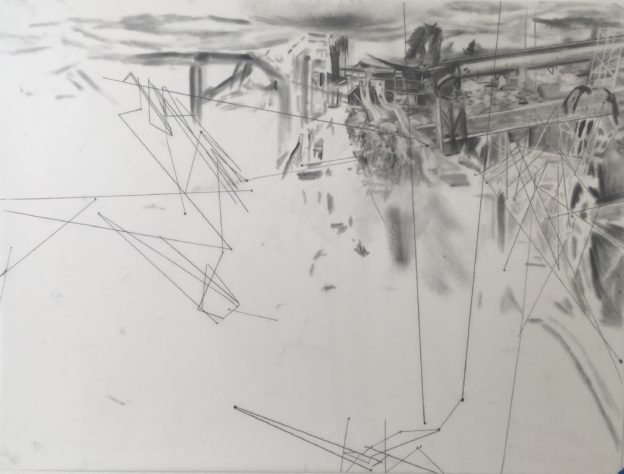 Drawing in progress based on 1 second of viewing, graphite on drafting film, 45 x 60 cm.

RB: We all have blind spots in our vision, but we don’t notice them because our brains fill the gaps with made-up information. We often treat filled-in inferred precepts as more real than veridical ones. Do you think our brains prefer invented visual information to the real thing?

SS: Absolutely, and by design. The design of the human eye is clunky. The optic disc is on top of the retina, creating a literal blind spot that we barely notice if at all due to this ‘filling in’ process. Alongside the disproportionate brain-power allocated to vision vs. other functions, this points to the idea that much of vision is constructed, and that the traditional camera model of vision is misguided.

But I am not sure we know what the ‘real thing’ is. Is the real thing the oncoming traffic or is it the bacteria on the handle of the car door? It’s both, but what would it mean to see both? In Interface Theory, Donald D. Hoffman asserts that fitness is never attuned to veridical perception, not in animals and not in evolutionary simulations of humans. Worrying about bacteria on the car door would impede our reaction time to the oncoming car.

RB: Your paintings are complex and highly-skilled, involving both an overload of information and the paradox of making information less legible. Can you say something about your visual language and how it relates to the complexity of perception?

All images copyright and courtesy of Sarah Sutton

Sarah Sutton is an associate professor of Art at Ithaca College, who is interested in vision science, spatial structures and speculative futures. Although her work is grounded in her painting practice, her collaboration with scientists and philosophers with overlapping interests provides creativity and vitality to her painting and teaching. "I teach all levels of drawing and painting at Ithaca College. Beginning in Fall of 2019 I will also teach a senior level Art Theory seminar. My teaching speciality is cross disciplinary collaboration with the sciences- past projects include Visualizing Spacetime with Physicist Dr. Luke Keller and Extended Self: Art and the Microbiome with Biologist Dr. David Gondek. Self- designed courses include Environmental Aesthetics and Painting, The Contemporary Sublime and Drawing and Speculative Futures." www.sarahsutton.net View all posts with Sarah Sutton →