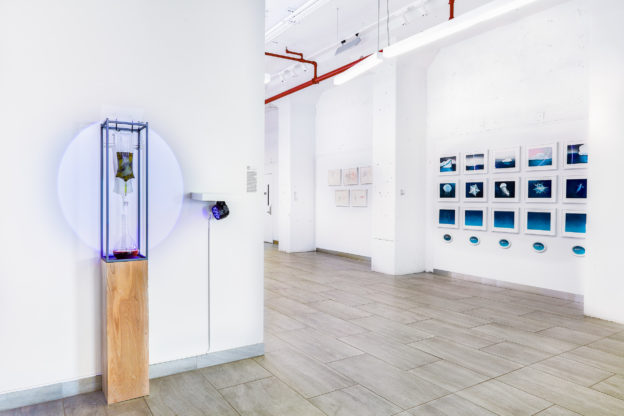 In March of 2017, a man in Massachusetts filmed two dozen wild turkeys walking in a perfect circle around the body of a dead cat in the street in front of his house. The resulting video of the looping landfowl quickly became a viral hit, its popularity fueled by the eeriness of the scene and its irreconcilability with what we think of as typical turkey behavior. It captured what appeared to be a spontaneous emergence of order.

Much like the bird experts who were called in to make sense of the turkey video on radio and television news segments, the artists in Spontaneous Emergence of Order use scientific rigor to deepen our understanding of the natural world and humans’ relationships to it. For Tanya Chaly and Richelle Gribble, this often involves processes not so different from those used by field researchers to catalogue and categorize flora and fauna, with particular attention to how both have been impacted by human behavior. Magdalena Dukiewicz and Tarah Rhoda take more microscopic approaches in their work, using the tools of the science lab to recreate and examine natural processes—many of them involving the chemical makeup of the human body. Taken together, these four artists’ works help us visualize and understand complex processes in our bodies and our environments that often go unobserved.

In her paintings, drawings, and installations, Tanya Chaly underlines the connections between animal species, landscapes, and the human activities threatening them. In one series, she pairs historical images of birds and amphibians—two groups of animals currently suffering rapid population declines—with abstract representations of human systems and networks like black market trading channels and social media algorithms. Through such juxtapositions, Chaly draws our attention to the very real but often unseen consequences of the systems many of us take for granted.

In her newest series, Flesh and Blood, Magdalena Dukiewicz also hones in on materials that we don’t typically see, namely blood and hydrolyzed animal collagen (a byproduct of meat production). The delicate, translucent, and ephemeral sculptures she creates from these materials in the lab are undeniably organic while also having something otherworldly about them. Their gradual breakdown encapsulates the process of life and death to which all animals are subject, human or otherwise.

Where Dukiewicz illustrates natural cycles at a microscopic level, Richelle Gribble takes the macro view, with sculptural installations that track large-scale changes in landscapes and behaviors. In many of her recent works, she isolates the strange sense of order that can emerge in the midst of environmental upheaval, underlines the oddly organic patterns formed by human activity, and offers visual representations of the anthropocene, a term that refers to our current geological age, which is defined by the effects of human activity on the planet. Gribble’s work neither aestheticizes the effects of human exploitation and development on the planet, nor oversimplifies the processes that fueled these anthropocenic changes.

Like Gribble, Tarah Rhoda is concerned with visualizing the push-and-pull between humans and their environment, but she does so on a much more intimate scale. She often creates elaborate and poetic scientific contraptions that juxtapose human physiognomy with analogous processes in nature. Her 2017 installation “Ourglass,” for instance, illustrates the symbiotic processes of photosynthesis in plants and respiration in the human body. By visualizing these difficult-to-observe chemical phenomena, she underlines just how interdependent they are: when plants can no longer breathe, we will not be able to either.

Taken together, these artists’ works make clear that the natural systems that have governed life on this planet for millennia are in crisis, without being didactic about it. They are intricate and often beautiful warning signs—not unlike the video of the circling turkeys—that something is amiss. They provoke and reward curiosity by offering us a range of ways to think differently about our bodies and behaviors in relationship to the environment. 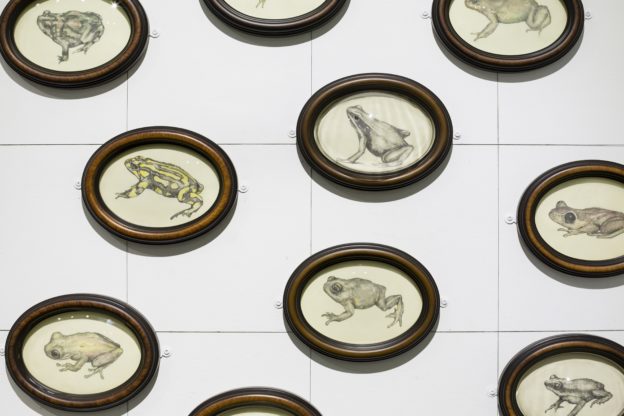 Tanya Chaly explores how natural history, wilderness, and the natural world are presented and recorded. Tanya makes research trips and gathers materials from the natural environment, as well as conducting field research face-to-face with scientists. Her work renders the invisible forces that shape our world, making it possible to reimagine what we perceive of the natural order. 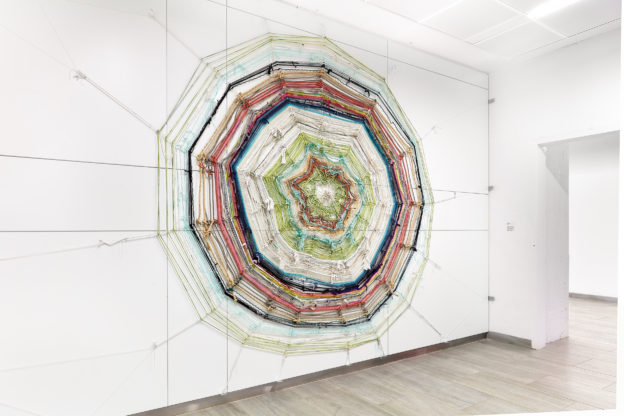 Richelle Gribble explores the interdependence of life at all levels of living systems – organisms, social systems, and ecosystems. Her work reveals the striking similarities between the structural patterns that occur in our social, biological, and technological networks, blurring our world into one integrated system. Richelle poses an important question: how does connectivity, for better or for worse, influence our lives and our future? 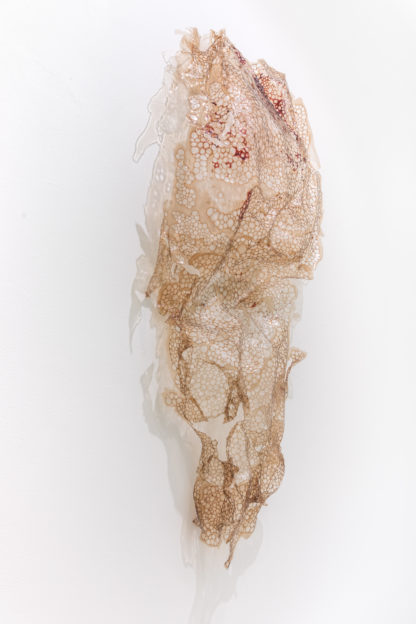 Magdalena Dukiewicz’s practice deconstructs and decontextualizes hydrolyzed animal collagen and blood, turning these substances into refined pieces of art. As the piece itself disintegrates and transforms, it evokes the natural life cycle. The ephemeral nature of her work illuminates the underlying themes: time, transformation, memory, identity and death. 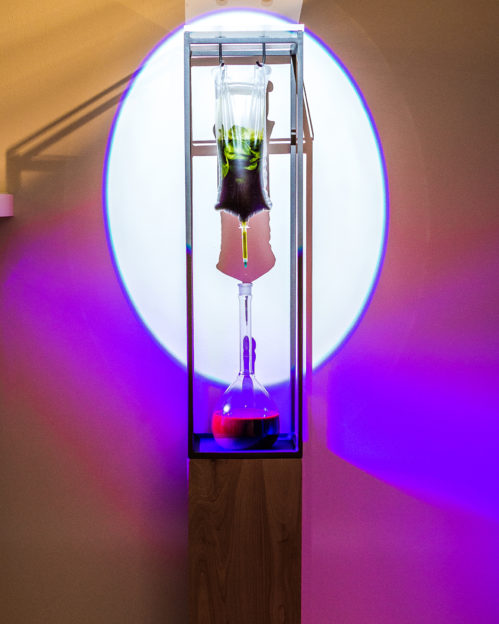 Tarah Rhoda’s work explores the body as a reflection of the natural world, echoing the landscapes, weather patterns, and biological processes that result in various minerals. She often uses laboratory practices to approach her own body as an archaeological site, “mining” her own tears or freckles to create profound pieces that cause us to reflect on our relationship with nature. Tarah also manages the SVA Bio Art Lab.

(photos by On White Wall) 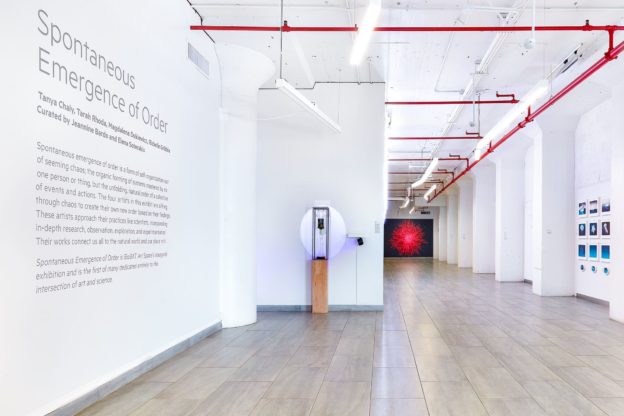 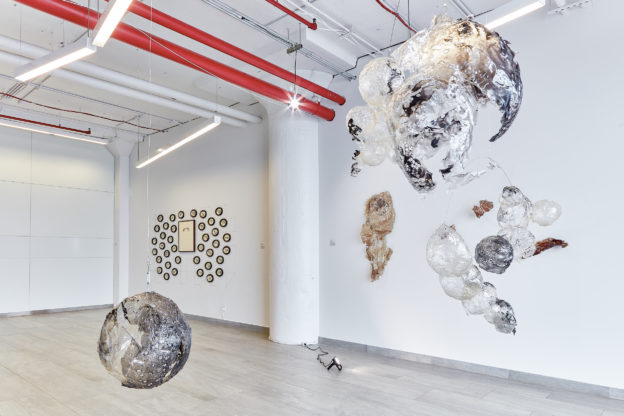 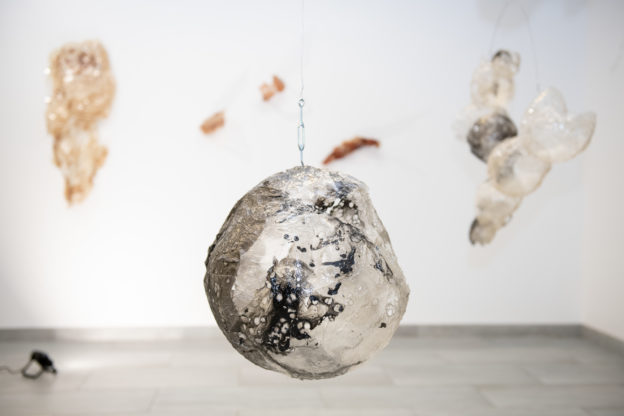 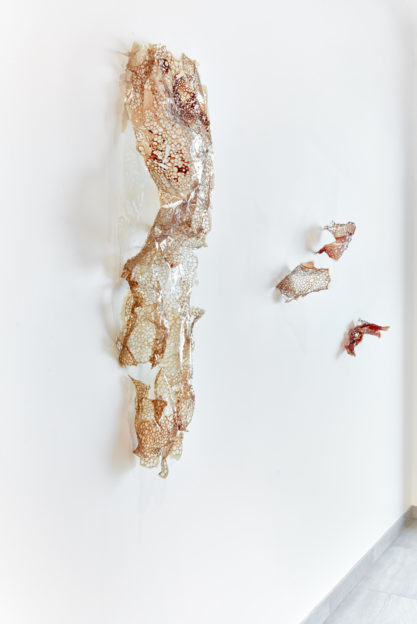 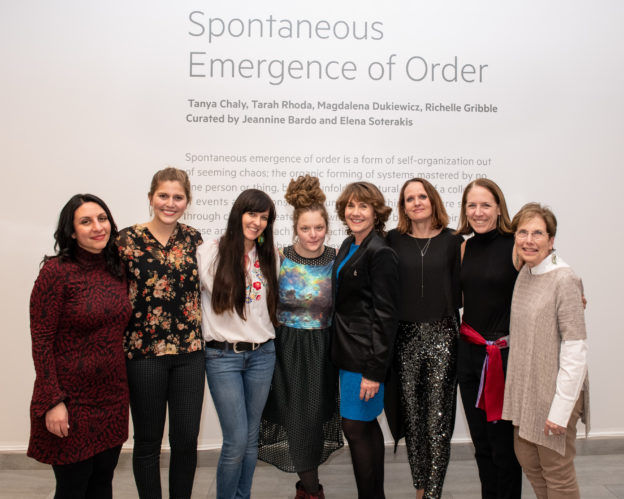 BioBAT ArtSpace- On the waterfront at the Brooklyn Army Terminal, Building A, 140 58th St, Brooklyn, NY 11220

BioBAT ArtSpace was conceived to serve the communities of Sunset Park and Bay Ridge through the advancement of STEAM education by using the arts to connect science, technology, engineering and math. Art programming and exhibits will be designed to foster dialogue and cultivate a community space that will introduce the advanced sciences to local schools and community members. We believe that the arts can be used to enhance creative and critical thinking, can make connections across disciplines, and nurture future generations of innovators. https://biobat.nyc/ View all posts with BioBat →