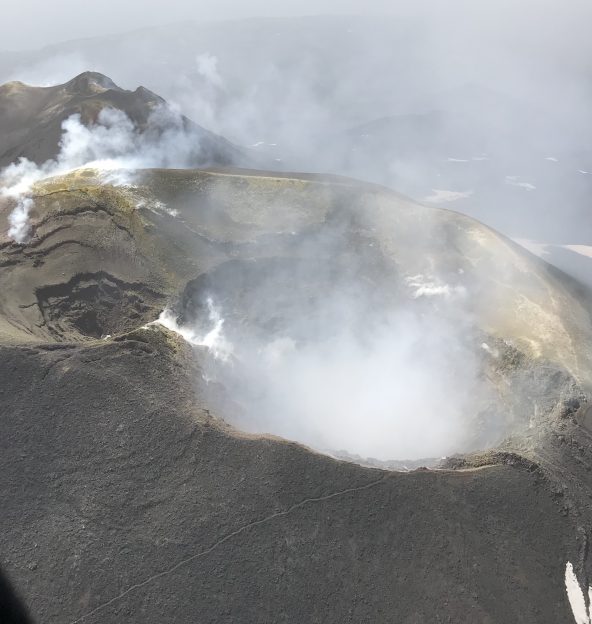 Water takes a central place in my view of the world. It is the container of life and the connective element in the landscape. I’ve always needed to be near water and recently I’ve been traveling around collecting samples from streams, glaciers and rivers in obscure parts of the world. The most incredible thing is that there is the same amount of water on Earth as there was when the Earth was formed. It is constantly molding landscape by glacial action and erosion.

In June I went to Catania, Sicily to explore Mount Etna, Europe’s most active volcano. I wanted to collect volcanic water and plant signatures for an environmental project I’m conducting in Trinity College Dubin: https://www.tcd.ie/trinity-creative/challenge/2017/siobhan-mc-donald. I traveled with scientists from Trinity College Dublin including Jenny McElwain, who holds the 1711 Chair of Botany at the School of Natural Sciences, TCD and with whom I have been collaborating. This new work focuses on my fascination with how water changes its chemistry through rocks. I could almost hear the lava caves breathing, and the slow growth of the tiny plant roots we found on the walls of the caves. We took samples of groundwater at different heights on Mt Etna from high up on the mountain where little vegetation can exist. As rain falls on the soil it starts to percolate down into the rocks as minerals start to dissolve into the water. So the chemical signature reveals something about its history since falling on the ground. 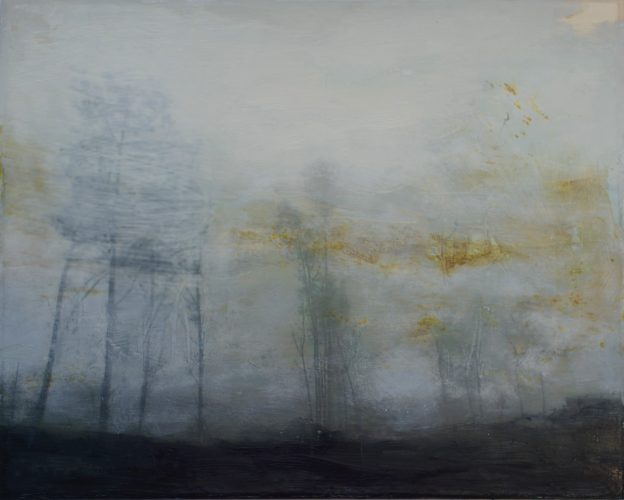 Looking at satellite images of the retreat of the sea ice is heartbreaking. It’s affecting everything in the plant world. More recently I’ve been preoccupied with root systems of trees and how they transfer water. 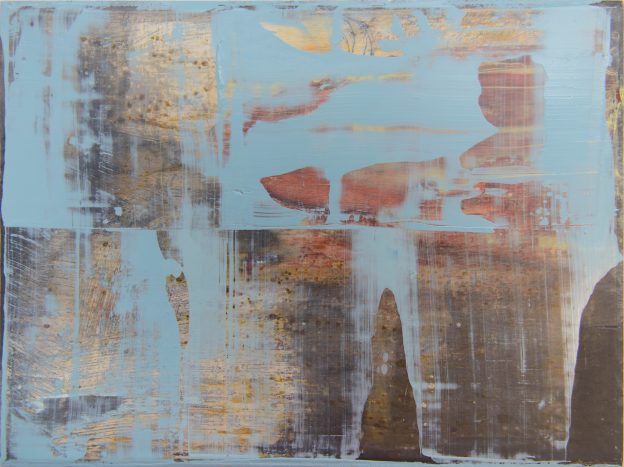 This year I published a book entitled Crystalline http://www.siobhanmcdonald.com/publications/

It will be launched at a show opening this month at Deutsches-Museum in Dresden, on September 27  https://www.dhmd.de/en/exhibitions/shine-on-me/ featuring artists such as Nancy Holt, Man Ray, Josef Albers, and Albrecht Dürer and many more. Inspired by NASA’s recent groundbreaking Parker Solar probe to touch the sun, the exhibition is called “Shine on Me: The Sun and Us”. My film At the Edge of Visibility will be projected onto the walls of the Gallery to explore the sun as a star. Research for At the Edge of Visibility was extended in 2015 when I found myself on a barkentine Arctic expedition in the same waters that had subsumed ships and Arctic explorers for hundreds of years. By 1823 the North American Arctic was still the last undiscovered ecosystem on the planet. It was a landscape so cold that it fractured everything it penetrated, including the stones. It was uncharted, unclaimed territory and Europeans had perished in it miserably.

Siobhan McDonald explores the vast diversity of the environment we inhabit and our equally diverse responses to it. In this short documentary, she talks about her exhibition Crystalline: Disappearing Worlds, and the fragile landscape of the Arctic Circle. 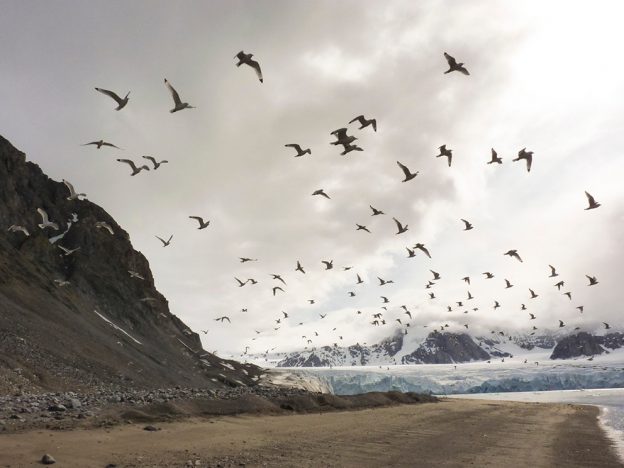 I was captivated by the story of the disappearance of the Franklin ships in 1845: the expedition of two vessels, HMS Terror and HMS Erebus, that vanished while searching for the Northwest Passage. I am retracing this territory by developing Unknown Landscapes, a series of oil paintings based on photographic plates from these expeditions. The cameras survived in the permafrost when the ships and crew disappeared into nothingness. The plates carry the melancholy and the magic of those frontier times. 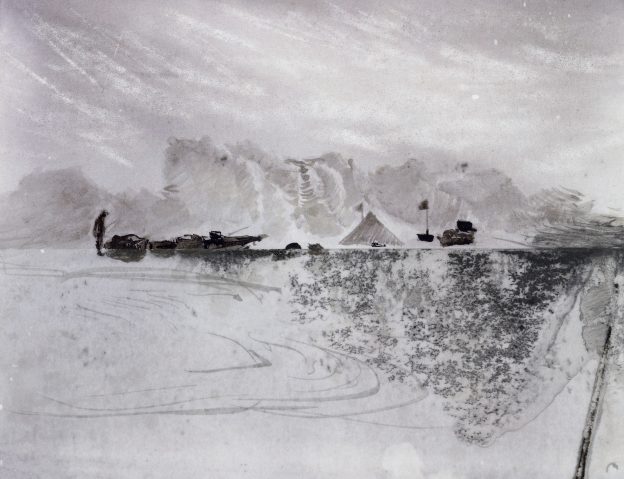 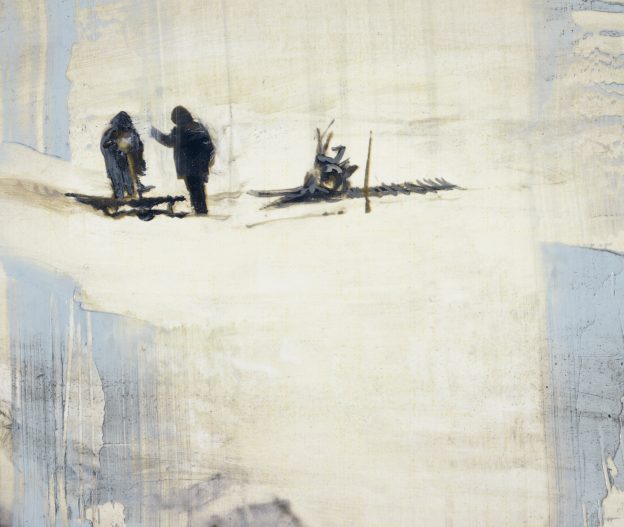 A sound piece in the show is prompted by my experience of the Arctic shelf melting. On my Arctic research trip in 2015, I used a heliograph – a device that was historically used to record the sun. Tom McCormack, a physicist at UCD designed a version for me, which I attached to the binnacle of the expedition ship to create a response to the melting glaciers by recording a sound score of the sun’s track at the summer solstice. I recorded messages and pulses as the sun moved through the sky on 21 June 2015 to produce a series of notations for the score. The burn holes created are photographic in the strictest sense, as each mark is a small black sun, and each dot is a repeat pattern of the sun’s image scaled down many million times on its journey to the Earth. In 2020, an original music score by Irene Buckley, with recordings I made in the Arctic, will be beamed into space from by ESA. 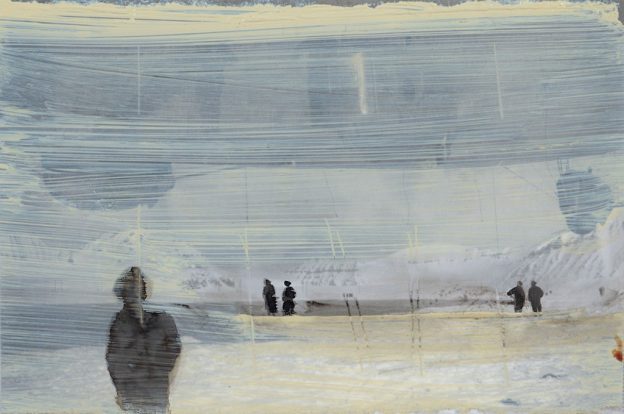 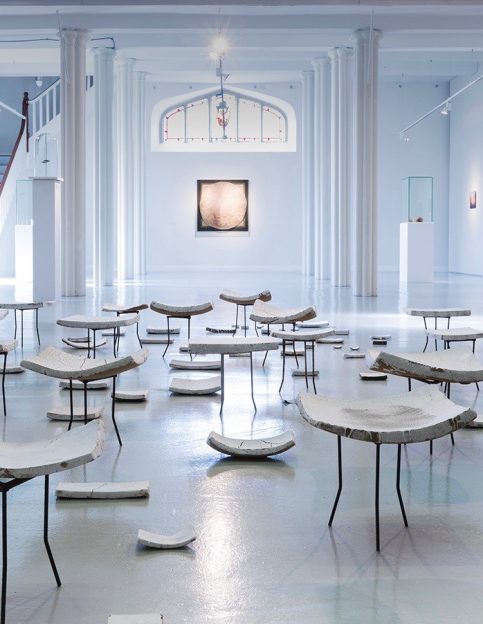 Installation of Crystalline exhibition, HighlanesGallery, Drogheda, 2017
Each piece is painted with a pigment that contains carbon and charred bone. ‘Solar White’ will bond with the titanium heat shield of ESA’s Solar Orbiter, to be launched in 2020

In 2010, my direct experience of Eyjafjallajökull erupting in Iceland catapulted my practice as a painter into working directly with the primary materials of geology and physics. Working on site next to a volcano felt like travelling to the centre of the Earth. Looking at seismology charts to explore how an earthquake can inscribe itself into scientific records I started to visualise these dark fluctuations as patterns generated by the forces of nature. My drawings of the unseen world of the microscopic brought a new form of alchemy into my paintings. 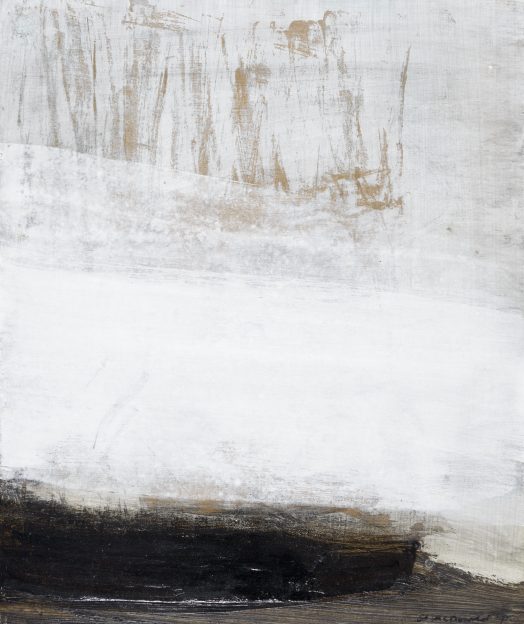 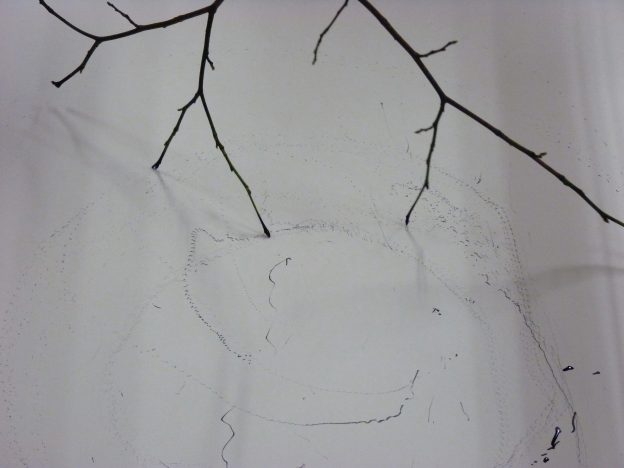 ‘Rhythm,’ is one of a series of watercolours produced using chunks of glacial ice that were taken from the Eyjafjallajokull volcano. A piece of ice was placed on watercolour paper and melted with black sumi ink; as the ice gradually melted, the water displaced the pigment. A tree branch was dipped into the solution. The drawing was activated by the rhythm of a sound wave taken from the first cries of the volcano erupting. Employing chance and natural processes, these watercolors are experiments that attempt to harness the traces left by natural phenomena. 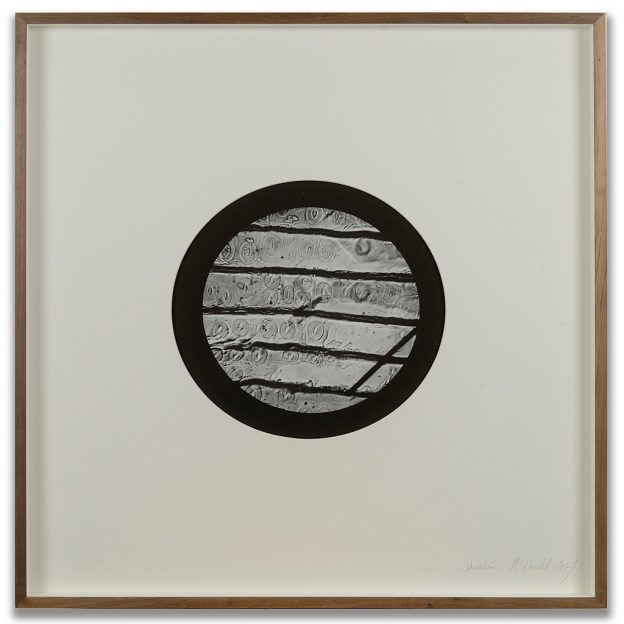 For this artwork I developed interventions, to include artistic media (painting, drawing and printing,) using new technologies and old scientific processes of image making.

In my research for this artwork I began with the study of plants and atmospheres as far back as 400 million years, to explore the essential ‘nature’ that, invisible to the eye, acts as imaginary portholes into other times and states of existence. ‘How the water moves’ is a response to one of the oldest slides in the collection of botanical specimens at the School of Biology and Environmental Science, University College Dublin showing, the plumbing systems within plants.

My research-based practice calls on notions of what is still unknown to science, exploring the origins of life and plants as a way to see clearly into the future. In my projects I confront this issue to pose questions on ways to embrace a cultural shift as the necessary part of the solution. For example, I am working with the European Space Agency on the mission ‘Solar Orbiter,’ to photograph the sun at an unprecedentedly close perspective to highlight future urgencies in our climate for the making of new artworks to engage with the trauma climate change is leaving in our environment.

All images copyright and courtesy of Siobhan McDonald

Siobhan McDonald is an award-winning Irish artist interested in the changeable nature of landmass, historical events and their interconnection to time. She is an artist in residence in the School of Natural Sciences at Trinity College Dublin (2017-2019.) McDonald is working with world-leading research facilities such as The European Space Agency (ESA); The JRC European Commission and The European Research Council to explore Ecology in light of current ecological concerns. Across these research labs, McDonald pursues knowledge to ask questions about the structure and history of the earth. Her art practice calls on notions of what is still unknown to science, exploring the Anthropocene and the recent consequences of our treatment of nature. McDonald works with a diverse group, including historians and scientists to manifest projects that take the form of painting, drawing, film, and sound. www.siobhanmcdonald.com View all posts with Siobhan McDonald →

One Response to “Messages in Water”