I think about people and water. A lot.

I have floated boats on swimming pools up and down the country, inviting people to step off dry land, to feel the motion of the water and see what that does to our thinking. I have dowsed 7 of the 22 rivers under London; dowsed them in groups so that as you walk through the streets, at times all your dowsing rods move together in one direction, pointing you to a different understanding of London’s geography and history, hurtling you back in time and place, re-orienting you in streets you thought knew well. 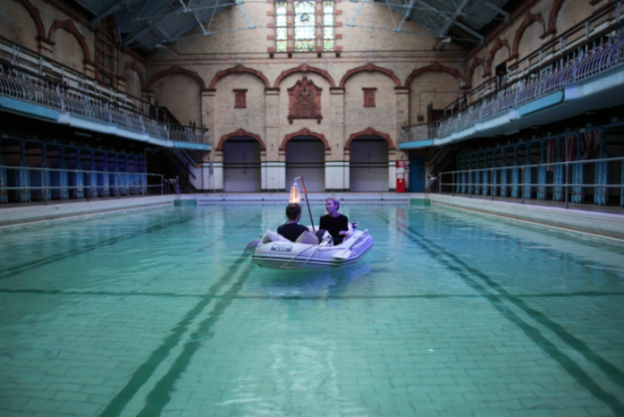 In 2007 I invited people to swim across London. 50 people joined me for SWIM, an adventure that started at Tooting Bec Lido at 5.30 in the morning, and traced a wobbly blue line across the brown cityscape to Hampstead Heath Ponds. SWIM was a journey to gain access to the water in this city, to open up the lakes, the private and the public pools to a tide of more and less competent swimmers, from all parts of the world and all walks of life. It was open invitation, as much as possible a free for all. 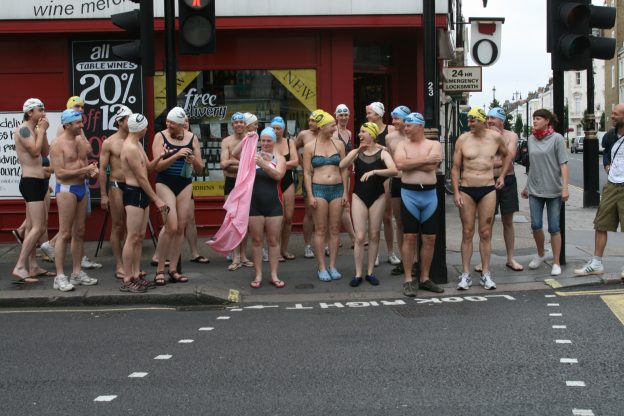 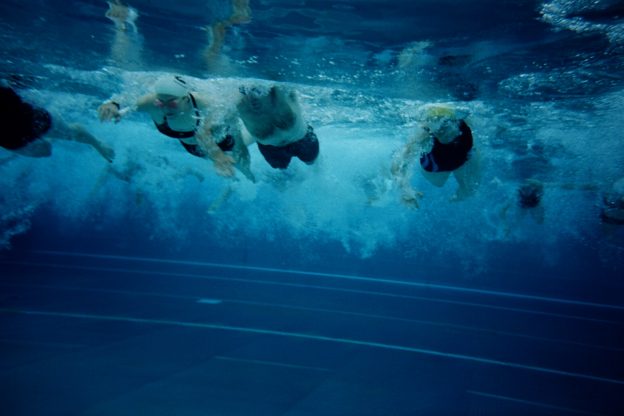 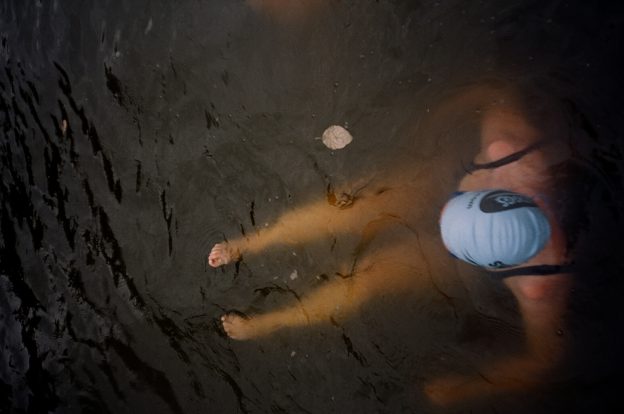 Do you know The Swimmer? SWIM was a British response to Burt Lancaster’s odyssey across the American landscape of Frank Perry’s film, John Cheever’s short story: 50 swimmers dashing and stumbling across the capital with strokes and costumes of varying style and competence. As Anthony Gormley’s Event Horizon looked down on us from the roof tops, and just as Martin Creed’s runners took to Tate Britain, we took a human measure of this city in the wide strokes of our dripping arms. Throwing off our usual uniform and routine, we ran out into the capital in only a swimsuit, putting our rolls of fat on display, skin that hadn’t seen the sunlight for too long, all swimming home. Someone called it a flesh mobbing. 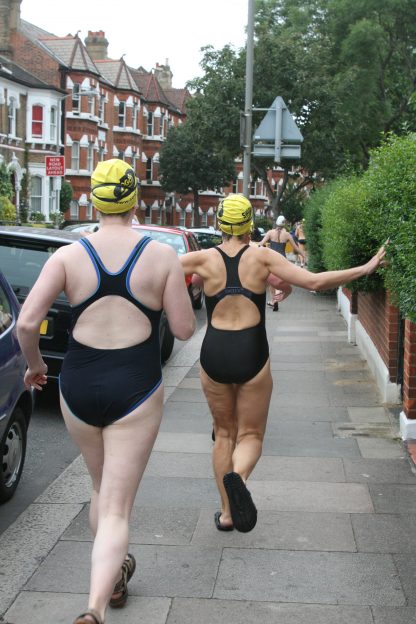 Since then I have spent many years travelling across Britain, Europe and Western Australia, gathering water for Museum of Water, a live artwork that invites you to consider water, to spend time with it, to really notice it as it moves through our days. The public collections now hold over 1217 bottles; 1217 creative acts by people from all around the world, ways of reaching out to nature with our bodies and minds to cherish what we love about it. 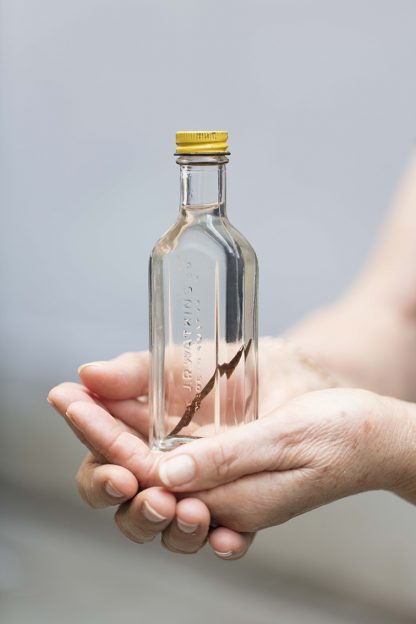 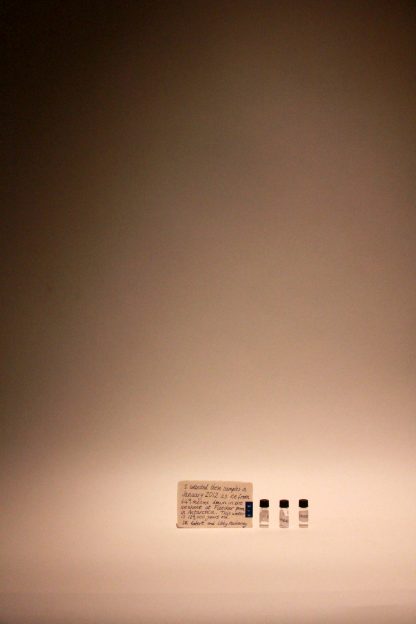 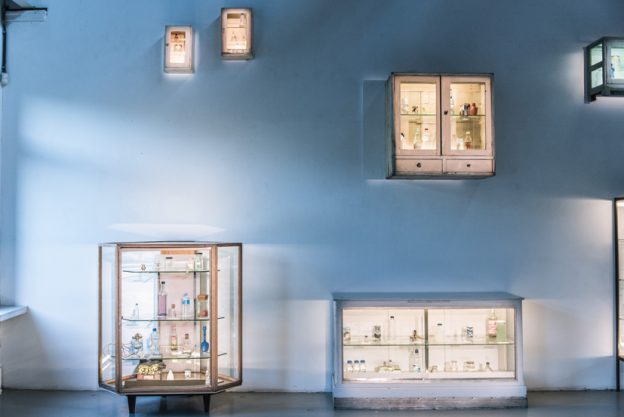 When people give water to Museum of Water, the accessioning process has no fixed time. It takes as long as it needs (to get everything said). While usually the conversation may take about 30 minutes, occasionally people have talked to me for an hour and a half about what is in their bottle. Museum of Water explores a different economy of care in the world, where people might listen carefully, where large institutions are able even to treasure evaporation. It traces the movement of water around the world, the very molecules, and considers each bottle’s boundaries, connecting us all through the movement of water molecules across our porous membranes. It reminds us that we all have permeable boundaries, that we are all connected through water that is slipping through our fingers, in constant process with our bodies, the constructs of our days and our built environment.

Amy Sharrocks is a live artist, sculptor and film-maker who invites people to come on journeys in which their own experience, communication and expression are a vital part. Her work gives careful consideration to the impact we have on each other and the world. For 15 years she has been investigating people and our relationship to water, floating boats on swimming pools, swimming across London, dowsing rivers and gathering donations for Museum of Water. Museum of Water was in Somerset House for summer 2014, has since toured to over 50 locations worldwide, and has been visited by over 65,000 people. The Museum has spent two years in The Netherlands and Western Australia and was nominated for European Museum of the Year 2016. In 2013 she won the Sculpture Shock prize from the Royal British Society of Sculptors for her work on falling, which looks at our daily trips and stumbles, the precariousness of life, exploring risk, daring and shame, and questioning our need to be UP. Her writing about falling in Live Art was published in Performance Research no. 18 and the Live Art Almanac 4, a collection of the best writing on live art 2012-14. Her films have been shown across Europe and the Middle East, she has two books on her own work – SWIM and Museum of Water - and her work appears in various collections: Walking’s New Movement, Playing for Time, Artsadmin 30. In 2014 Amy was one of 10 artists selected for Museums at Night; she was won by Swansea Museum in a national vote and made DAYTRIP with them, an invitation to fall in the sea with her, filmed by BBC. In 2015 she was shortlisted for the Arts Foundation Fellowship Award, and in 2017 she organised the Fry’s Island Swim, a swim for 80 people in the Thames River in the heart of Reading, and is currently encouraging people to sign up to Swim the Thames, a swim across the river in London. She is an Associate Artist at CCANW. She is an activist for women’s rights and co-curator of WALKING WOMEN, a series of events in London and Edinburgh across 2016, and of DAYLIGHT, a newspaper which brings focus to women’s art, thinking and speculations, launching at the Wellcome Collection in October 2018. This year sees the opening of a major solo exhibition of her work - only ever almost there opens at Leamington Spa Museum & Art Gallery November 2018 - February 2019. http://www.museumofwater.co.uk http://www.iwanttoswim.co.uk http://www.swimthethames.co.uk View all posts with Amy Sharrocks →