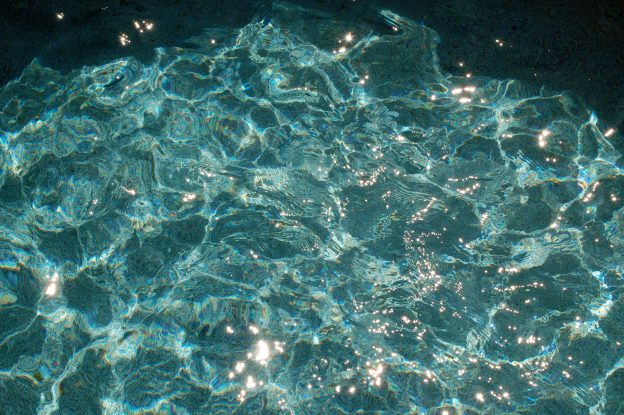 How did water originate? How did it get to Earth? Astrophysicists are confident they can answer the first question. The second one is trickier.

About a couple of minutes after the Big Bang had produced a soup of subatomic particles, the temperature was low enough (about three billion degrees!) for protons and neutrons to get together to form nuclei of our four simplest elements. Once the temperature had fallen to about 4,000°C, these nuclei were able to capture the electrons needed to form atoms of hydrogen, helium, lithium and boron. Getting to larger atoms (we need oxygen for water) had to wait until gravity had done its bit by condensing this gaseous soup to form stars, within which nuclear fusion processes produced many of the other elements in our periodic table. Obtaining the heaviest elements, however, required other nuclear processes which are triggered when a star dies after collapsing under its own gravity: in spectacular supernovae explosions that also scatter the raw material from which our world was formed.

If we now look ‘out there’, we can see in spectacular molecular clouds the results of these explosions and what time has done to them. In addition to the dominant hydrogen, we find other gases such as carbon monoxide and ammonia. And of course water – which turns out to be one of the commonest molecules in the Universe after hydrogen.

These molecular clouds also contain small grains of solid material such as silicates and carbon, often with a coating of ice. As these grains come together under gravity, the resulting ‘clump’ flattens into a rotating disc. Most of the material gathers at the disc centre to form a star – such as our sun. The gas and dust grains further out accrete to form small rocky bodies (planetesimals) that collide with each other, and cohere to form larger bodies. Eventually we have ‘planets’ – at this stage perhaps more like molten rock, but containing much of the material we now have on Earth.

There are several ideas about how water got here. As mentioned above, many of the dust grains were ice covered, so maybe that water was retained on accretion. Another suggestion is the capture of gas from the molecular cloud from which the sun and our solar system formed, though it’s thought unlikely that much water arrived this way. Finally, water may have come from impacts with asteroids and comets, though results from the Rosetta mission argue that comets may not be a source of our water. Until more evidence is in, perhaps we’re forced into a compromise position that all three of these sources may have contributed.

The ‘terrestrial’ history of our water seems to be a pretty intractable problem in Geochemistry. However, informed speculation might note that during the formation stage, the colliding planetesimals might deposit enough energy to at least partly melt the Earth to produce a magma ocean, containing water and other volatile molecules. As the magma cooled, the volatiles would be ejected to form a primitive atmosphere of mainly carbon dioxide and water (the Earth’s gravity being too weak to retain hydrogen). On further cooling, water vapour condensed into clouds. And then it rained and rained and rained… So within about a hundred million years of the Earth’s formation, it may well have had a primitive atmosphere and large oceans.

We don’t know with any degree of certainty how much water the Earth has grabbed. Oceans, rivers, groundwater, ice, rocks and organic matter account for about 1.9 billion billion tonnes, some 70% of which is oceanic salt water. In addition, perhaps up to two Earth oceans-worth is locked up in the mantle.

However much there is, only about 2% of it is fresh water. And with about half of that locked up in the ice caps and around 90% of the remainder in groundwater which it would be irresponsible to completely mine, we can reasonably access only about 0.1% of the grand total.

1.9 million billion tonnes may appear a large amount, but the smallness of the fraction might focus our minds on looking after our fresh water sources. We need them to maintain our climate and to keep us, and other living things, alive.

This article was originally published in The Geographer (Spring 2016), the magazine of the Royal Scottish Geographical Society and is republished with the kind permission of RSGS.

John Finney is Emeritus Professor of Physics at University College. His Ph.D. on liquid structure was supervised by J.D. Bernal in the Crystallography Department at Birkbeck College London, where he was subsequently awarded a personal chair in Crystallography. His research has focussed on liquids and disordered solids, with particular reference to water and aqueous solutions, and the role of water in chemical and biological functionality. In 1988 he was appointed Head of Neutron Science, and subsequently Chief Scientist, at the ISIS Pulsed Neutron Facility, moving to the Quain Chair of Physics at UCL in 1993 to found the Condensed Matter and Materials Physics group. He is a Fellow of both the Institute of Physics and the Royal Society of Chemistry and past Vice President of the British Crystallographic Association. A founder-member and past Vice President of Euroscience, he was Founder Editor of Euroscience News. In addition to some 300 scientific research papers, he is the author of Water: A Very Short Introduction, published by Oxford University Press. The book provides an introduction to the science of water, ice, snow, and steam, and how the structure of water molecules gives rise to its physical and chemical properties. View all posts with John Finney →