A Mote it is… (Phillips 2010), ˈspɛktə/spectre (Phillips 2012a) and Exposure (Phillips 2012b) explore the ubiquity of data streamed like digital ectoplasm from an instrumentalized world (in particular the atomic force microscope (AFM)) and its potential as a material for manifesting things that lie outside of the normal frames of reference – things so far away, so close, so massive, so small and so ad infinitum.

The invisible and the obscured, the infinitely big or nanoscopically small, hover on the fringes of our cultural perception as the paranormal or spiritual dimension. The Atomic Force Microscope reveals more things in heaven and earth than have been dreamt of in these ocular philosophies. These lensless imaging technologies can ‘see’ that the things that were once perceived as parallel occult dimensions were in fact interwoven with our material world. In fact, the act of seeing is part of the problem, with the AFM we stumble around in the dark, feeling our way through the atomic forces that bind matter. When our vision fails we revert to the sense of touch to reveal the shape of forces and transcalar imaginary (Mcconville, 2011) things that provide the foundations for our lived reality, as fragile as they may be.

Pixels get in your eyes… 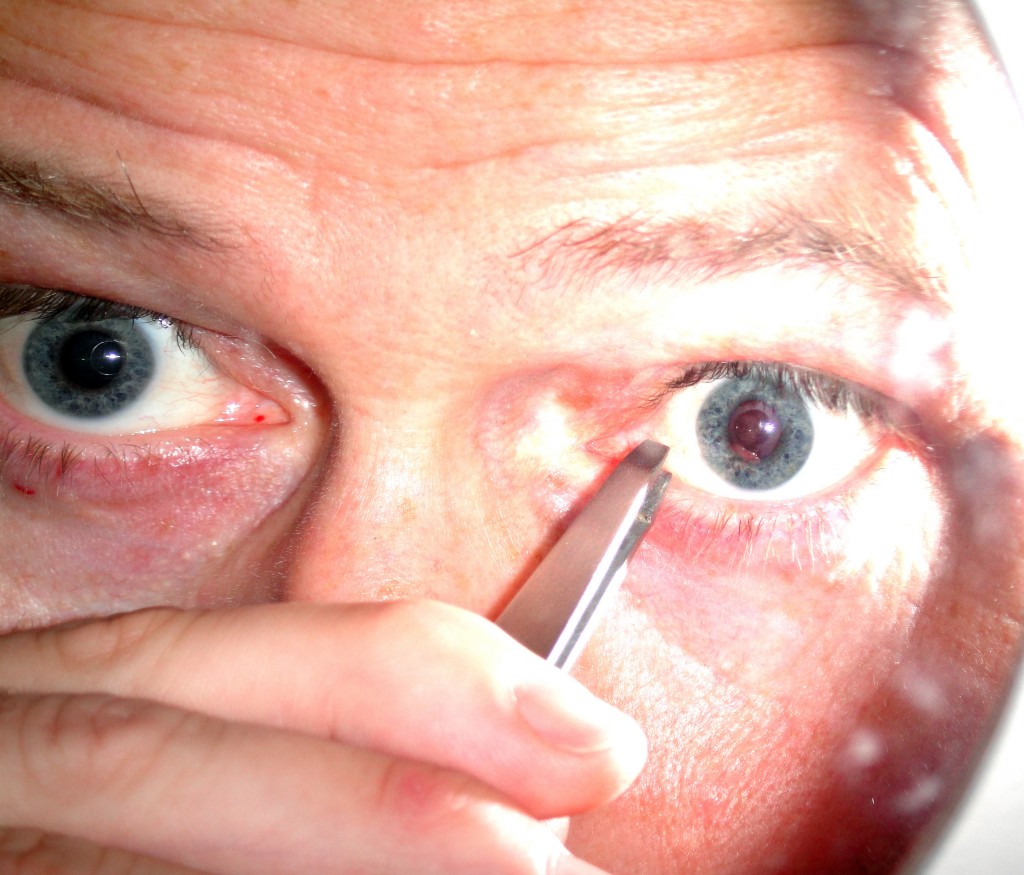 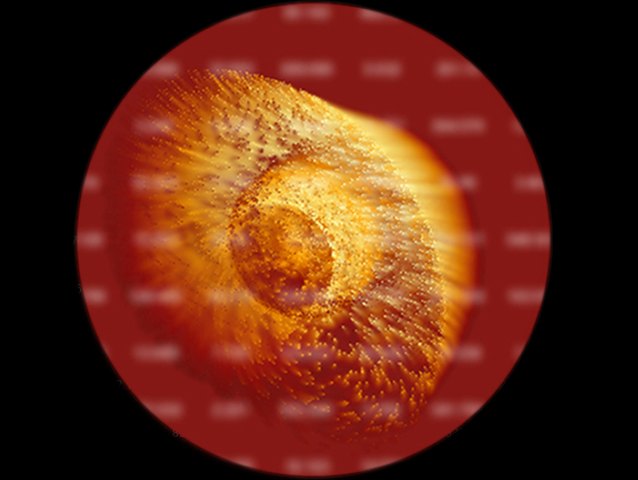 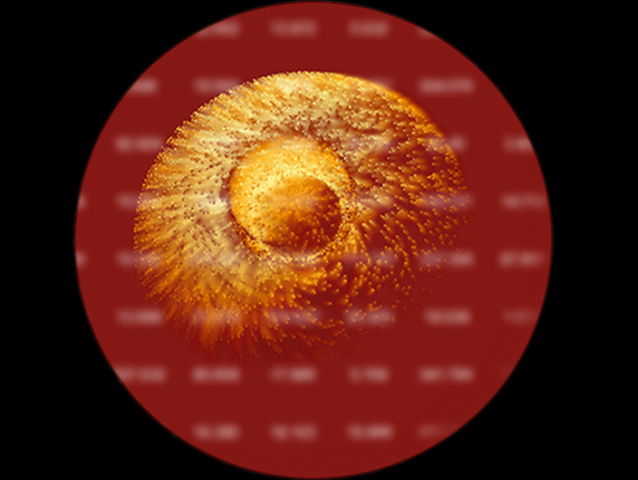 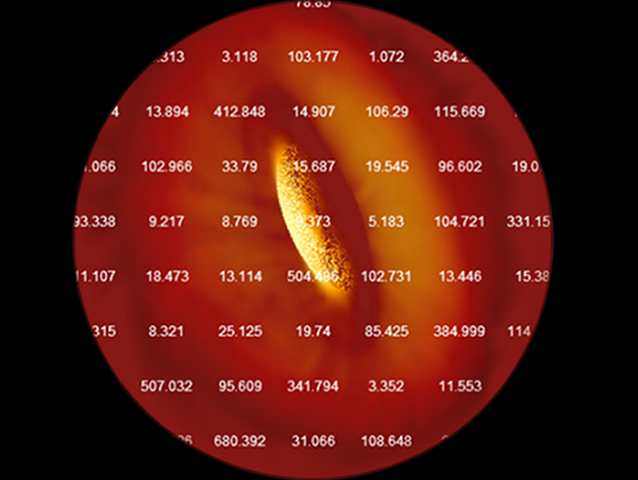 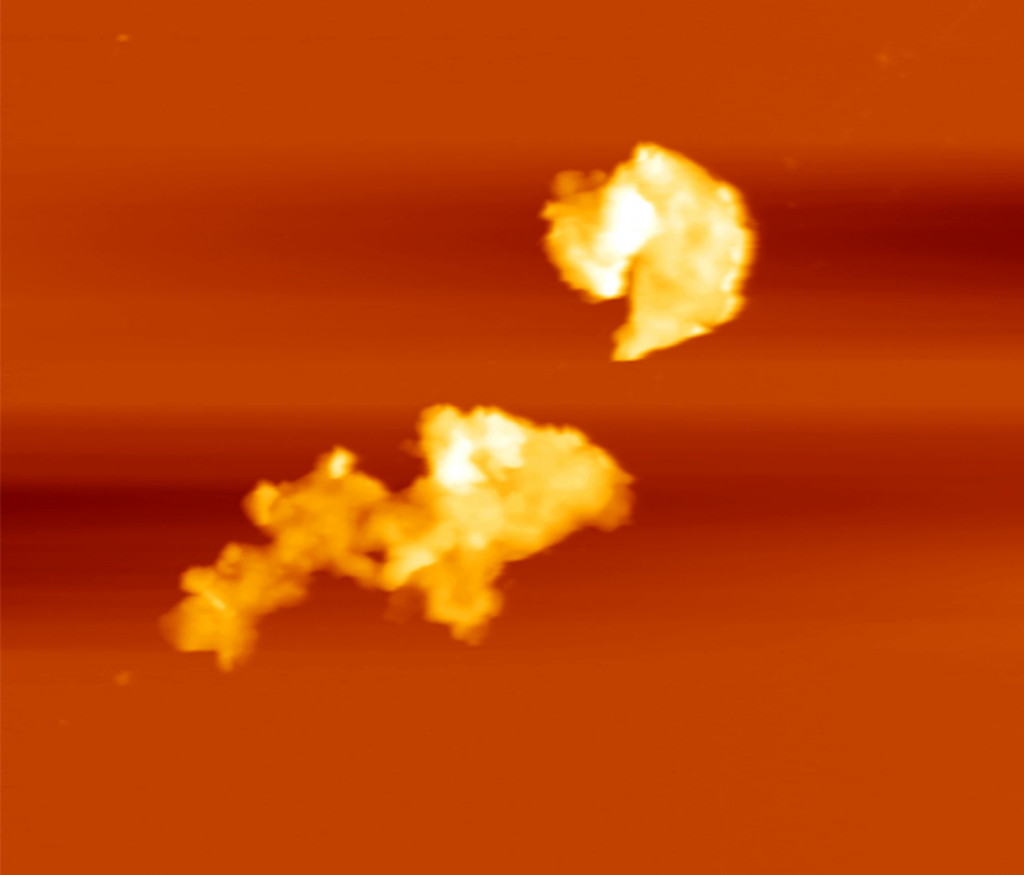 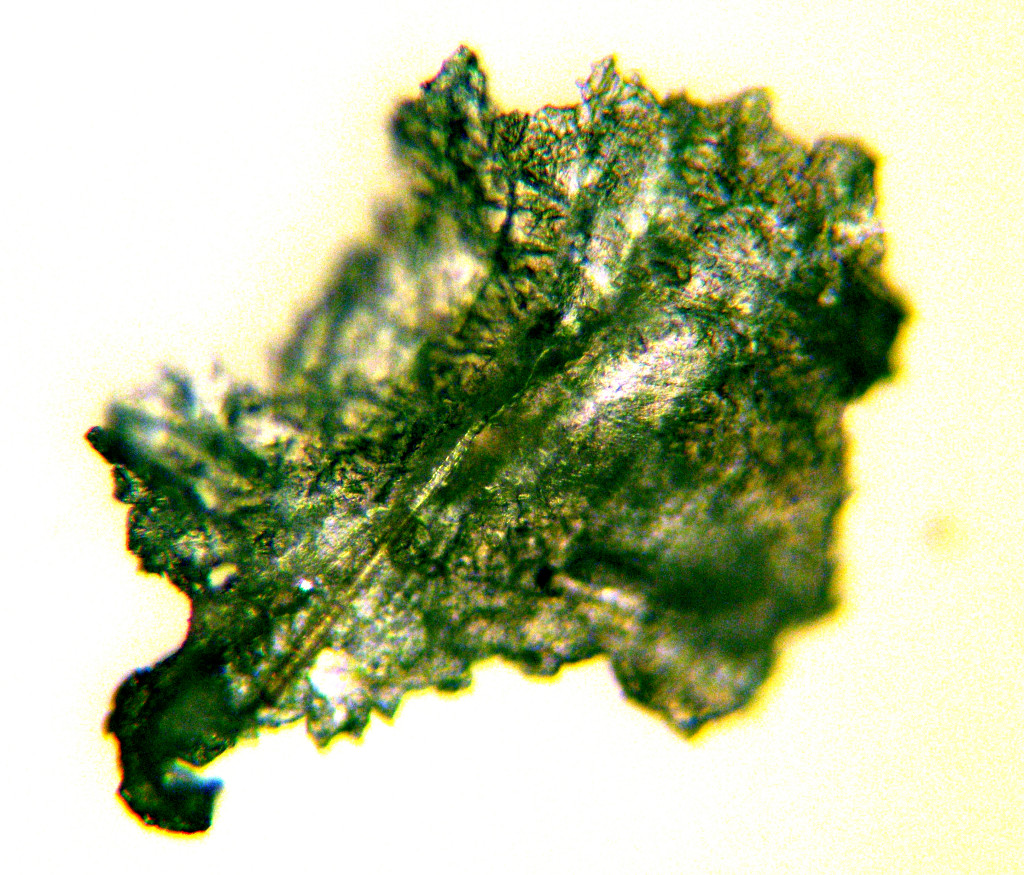 “A mote it is to trouble the mind’s eye.” (Shakespeare ca. 1599) Plucking a piece of dust from my own eye for A Mote it is…, scanning it with an Atomic Force Microscope and then reconstructing the captured height map data of the nano surface as a swirling cloud of pixels, attempted to engage our incomprehension of the transcalar. A ‘Mote’ is both a noun and a verb. Middle English with Indo-European roots, its early Christian origins and Masonic overtones describe the smallest thing possible and empower it with the ability to conjure something into being (So mote it be…). This dual state of becoming and being (even if infinitesimally tiny) renders it a powerful talisman in the context of nanotechnology.

For Hamlet, his dead dad’s ghost might or might not be a ‘mote’, or speck of dust, in the eye of the mind of the beholder, both creating the illusion and convincing him that what he sees is real. Something just out of the corner of the mind’s eye, those little flecks of dust magnified by the desire to see more clearly. Yet the harder we look the more blurred our vision becomes. A Mote it is… projected a swarming dust cloud in the gallery, but a cloud that was rendered invisible by the gaze of the viewer through a simple face recognition system. The more we look the more invisible it becomes – look away and it re-emerges from the maelstrom of data. A ghost of the mote can be seen in the viewer’s peripheral vision but never head-on. 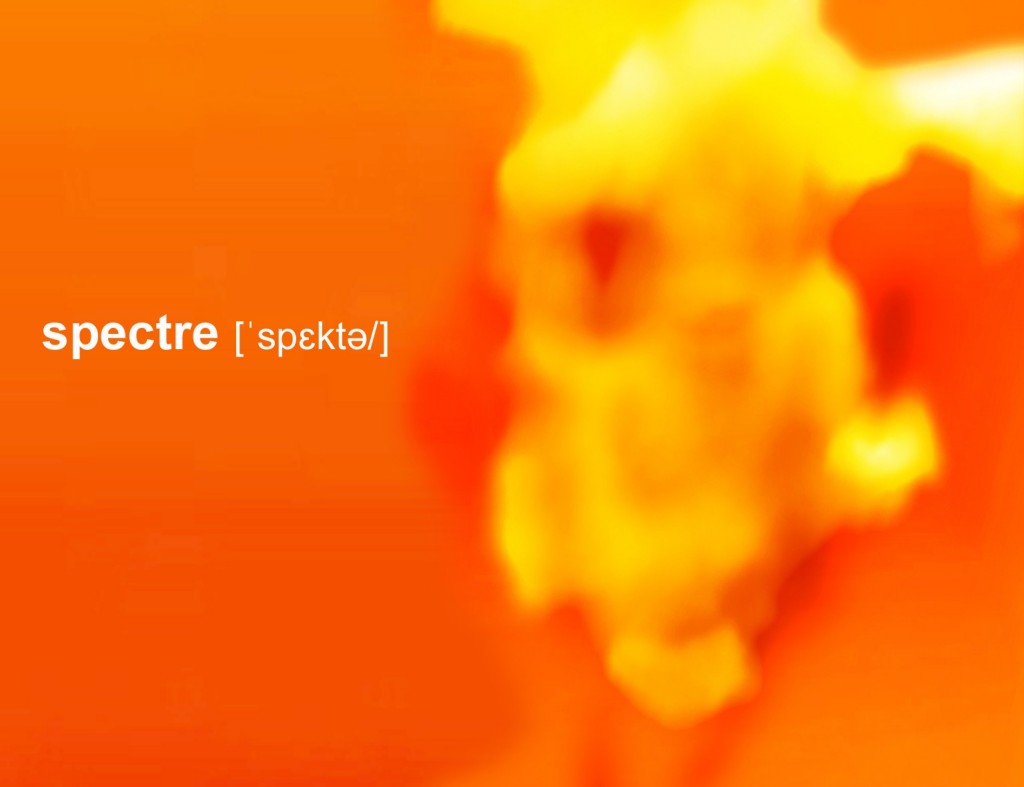 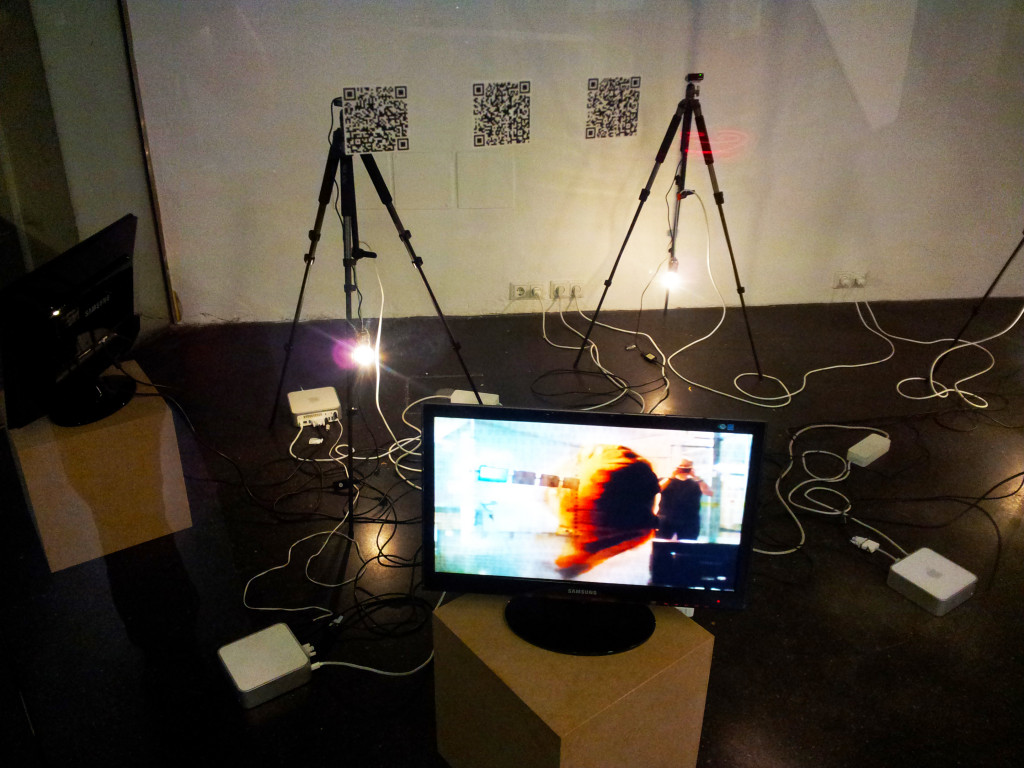 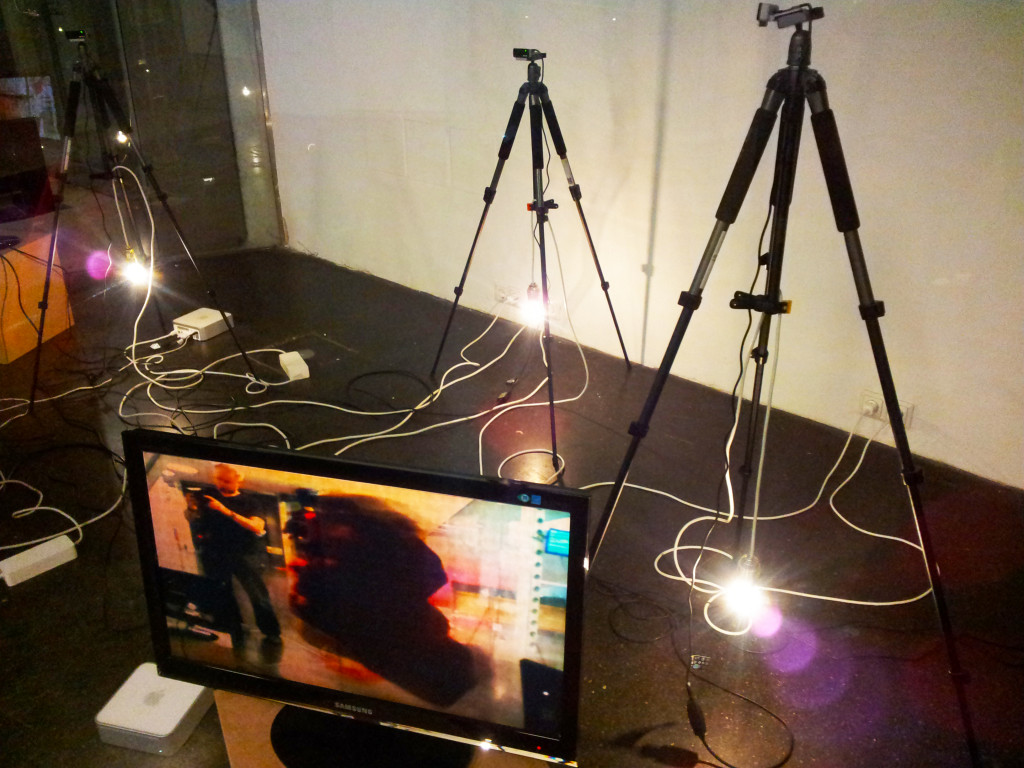 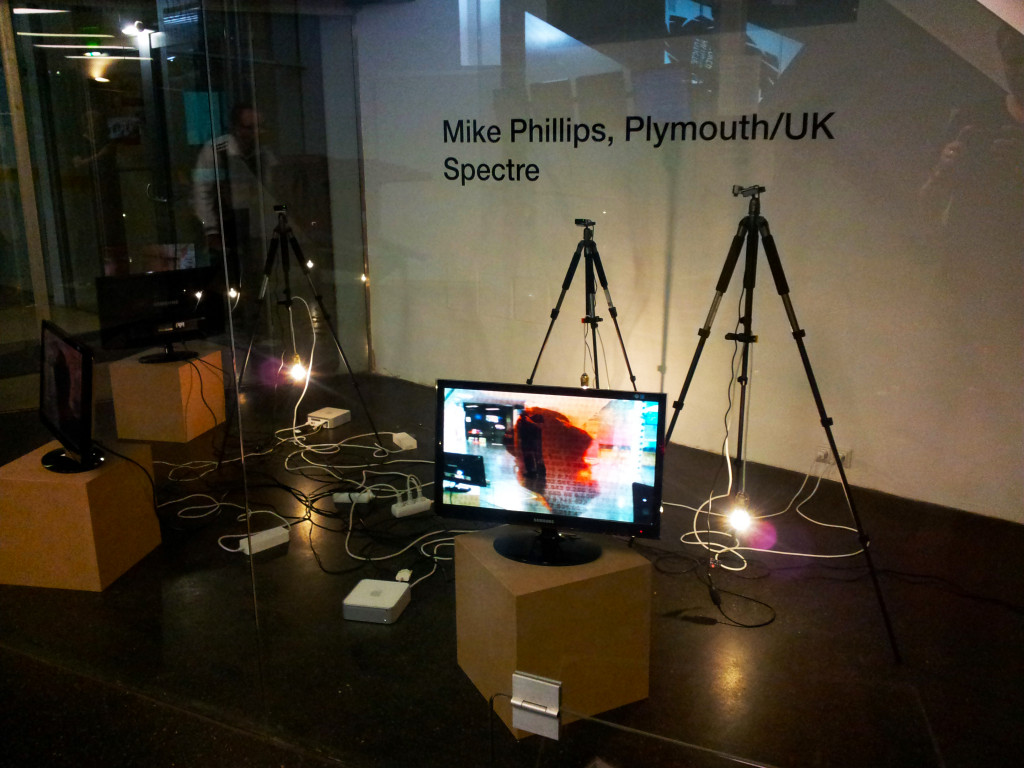 1. A visible incorporeal spirit, a ghost, apparition, phantasm, phantasma, phantom.
2. A mental image of some entity of terror or dread: the spectre of death…
[C17: from Latin spectrum, literally ‘image, apparition’, from specere ‘to look at’].

Further explorations with transcalar imaging techniques provided by the AFM were enacted in the Museums Quartier in Vienna in 2011. Hamlets conjuring of nano ghosts was extended to a ménage à trois of engineer, medium and artist from the 1930’s.

In the mid-1980s the author entered into an exchange of letters with Robert Morris, Koestler Chair of Parapsychology at the University of Edinburgh concerning the development of technologies that would enable a ‘psychometric’ architecture. Embedded in the fabric of a building these sensing technologies would manifest the activities of the previous day and replay them through a dreaming architecture of ghostly inhabitants.

‘The concept of objects (or places) seeming to record events and then play them back for sensitive people is generally referred to as psychometry. The objects can be called psychometric objects or token objects’ (Morris 1986).

ˈspɛktə/spectre suggested that the Schauraum in the Quartier21 (Electric Avenue) of the Museums Quartier in Vienna is such an architecture, and that the memories of the building are bonded to its fabric by the atomic forces that have now been unlocked by the AFM. spectre builds on the collision of A Mote it is… and psychometric architecture by drawing on the experiences of Professor Gustav Adolf Schwaiger, the technical director of the Austrian Broadcast Corporation, and his collaboration with famous medium Rudi Schneider from the late 1930s to the early 1940s. ‘G.A. Schwaiger […] conducted some private (and rather obscure) experiments with the famous medium Rudi Schneider in the studio of a female painter […] In fact the flat could have been right above our exhibition space (Schauraum)’ (Fiel 2011).

Schwaiger developed instruments, subsequently destroyed by allied bombing, which apparently were able to manifest clouds of ectoplasm. According to Mulacz’s History of parapsychology in Austria, ‘Schwaiger in his research focussed on investigating that “substance” and its effects applied then state-of-the-art apparatus, such as remote observation by a TV set’ (Mulacz 2000). That ‘substance’ was ectoplasm that would emerge from Schneider’s mouth during their experiments. spectre attempted to extend these experiments by replaying the physical and psychometric remnants of these historic happenings as captured in the atomic forces that bind the dust sampled from the laboratory. The multi-screen installation allowed the viewer to conjure up the data remains of the three ‘lovers’ – Schwaiger, Schneider and the mysterious painter – telematics broadcast from the transcalar dimension.

State of the Flesh… 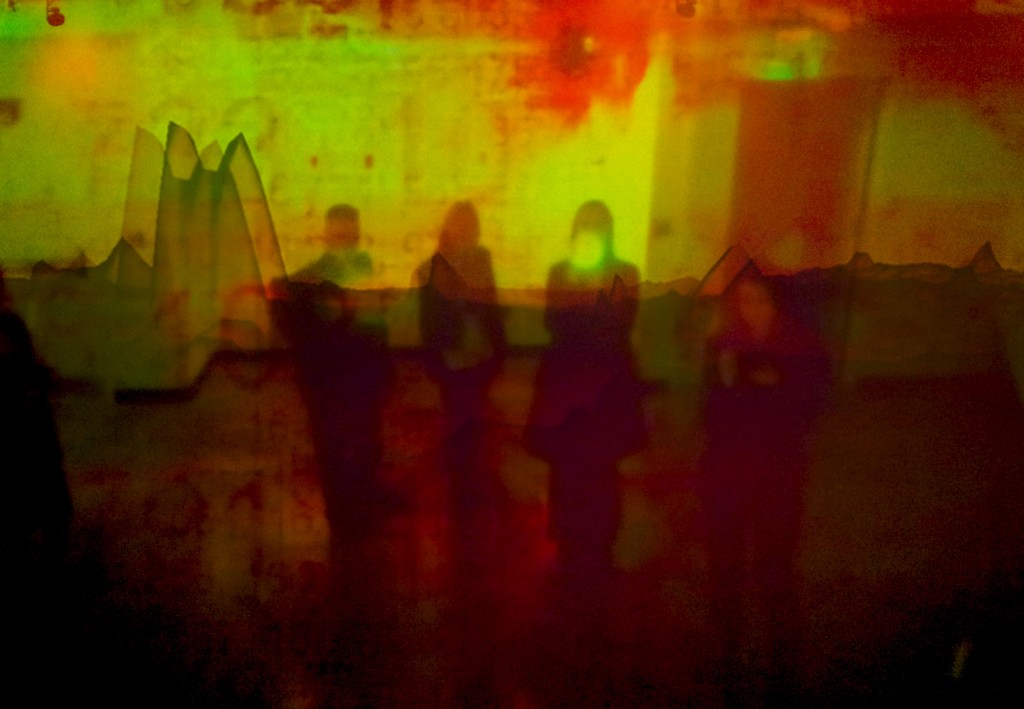 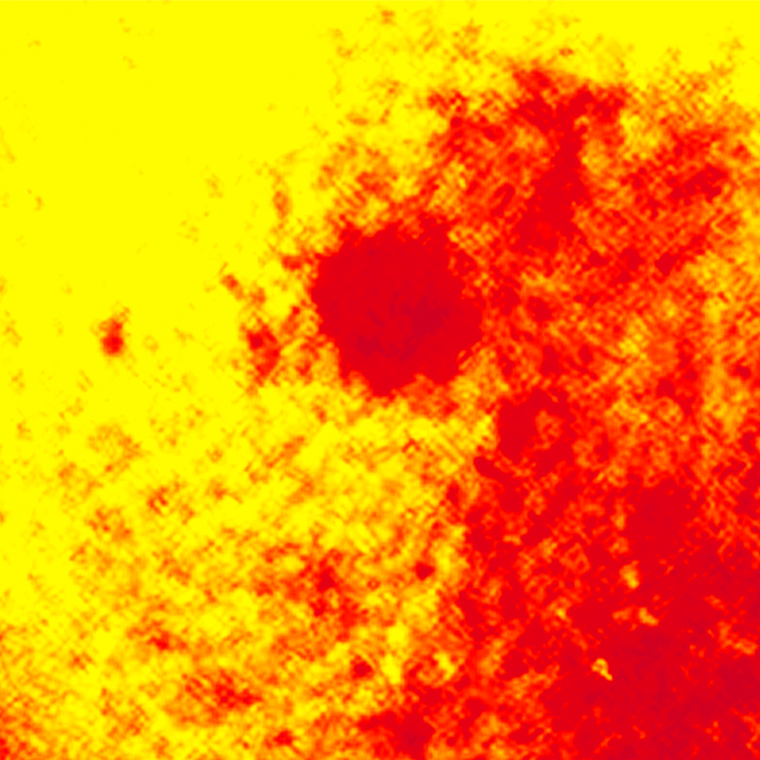 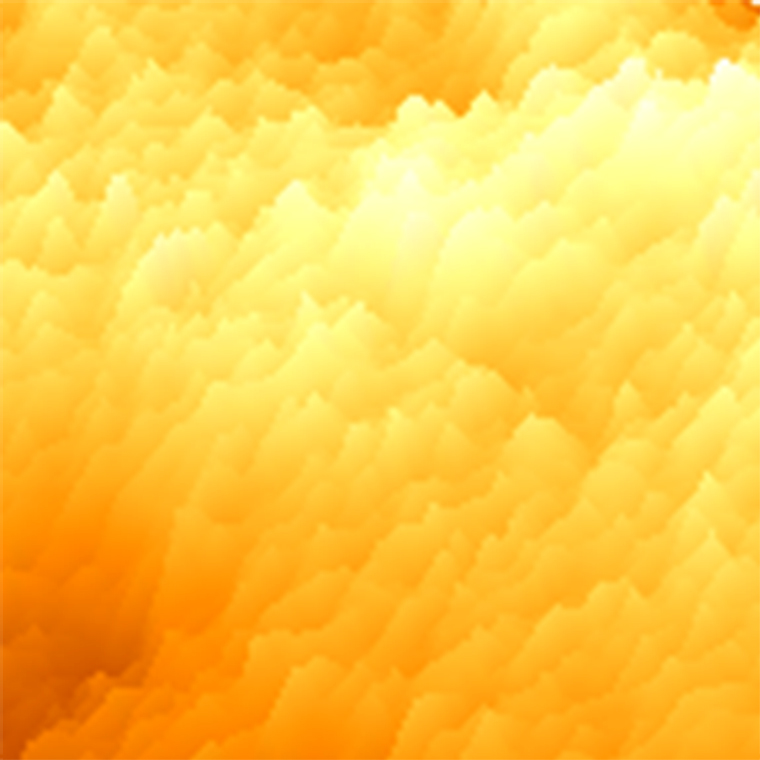 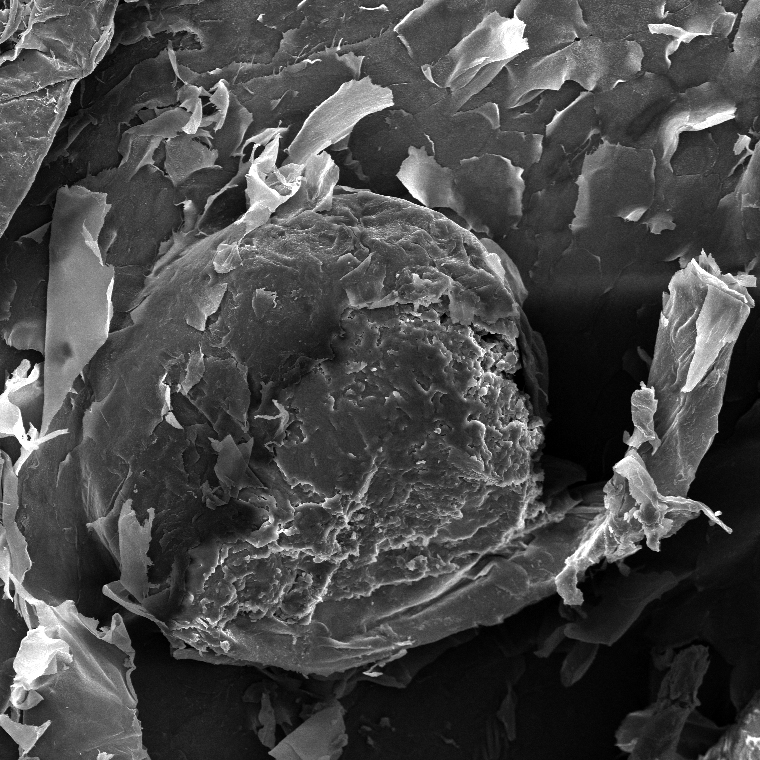 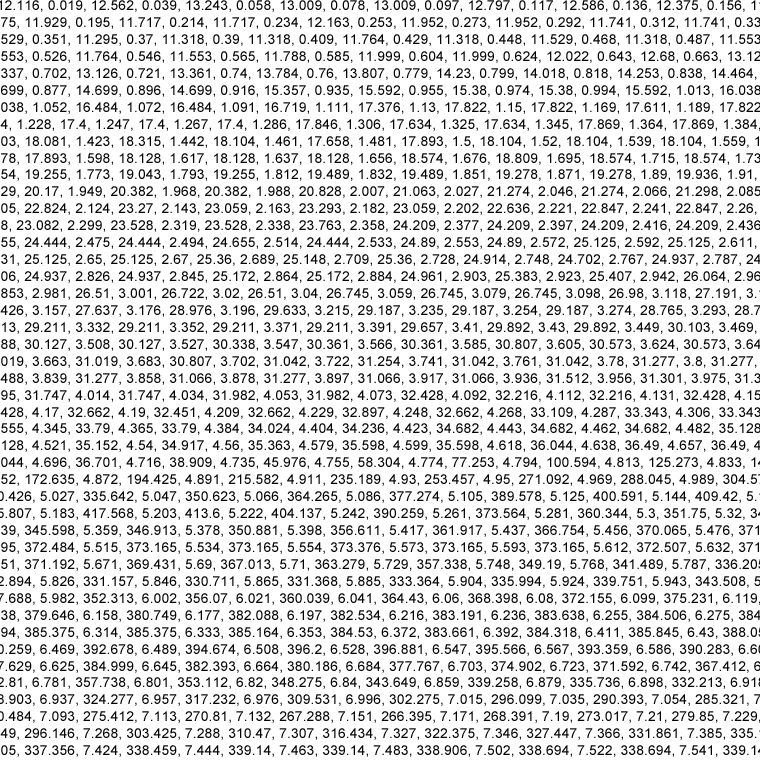 Exposure, (Phillips 2012) maps a trace of the slow emergence, over many years, of a basal cell carcinoma on the face of the author. The work attempts to link a slow emergence of a photographic narrative of snapshots in family albums and a molecular analysis of the corrupted skin. Following years of exposure, the slow development of a small hole became more prominent before its ultimate fix and removal with a local chemotherapy.

The year that Eastman Kodak filed for bankruptcy protection was the same year Fujifilm moved from film production to beauty products. This did not just mark a technological shift from film grain to nanoparticles but also a massive cultural shift – a shift from capturing the face on film to the embedding of ‘film’ in the face. The thing that once froze the face in an eternal youthful smile is now the anti-aging nanoparticle that preserves the face we wear. Barthes described the face on film as representing “a kind of absolute state of the flesh, which could be neither reached nor renounced”. Now this absolute state is closer to hand and we will walk around wearing our old photo albums as our face, peeling away the frames like layers of dead skin. Our essence, like Garbo’s, will not degrade or deteriorate.

‘Viewed as a transition’ Exposure explores the deterioration of the flesh through the temporality of the Atomic Force Microscope (AFM). From the 60th of a second exposure of the Kodak Brownie camera to the 20-minute scan of the AFM – the closer the subject the longer the ‘exposure’. Incorporating data from an AFM scan of a basal cell carcinoma Exposure explores the convergence of ideologies constructed around imaging technologies. The remains of the carcinoma were scanned to provide a mix of data and terrain for the installation. The viewer movement triggered a shift in the video, from the data field to the over exposed landscape. Through a subtle interaction the viewer conjured up a dynamic data/image of a skin cancer – over exposed to the sun – or the intense light of the camera flashgun.

Factoid: 90 percent of all skin is made from dust. The nano-triptych presented here uses the AFM as an instrument to release data from various samples, grit from an eye, historic dust and corrupted epithelia’s, like some perverted crime scene forensics, to create alternative narratives of a post-ocular culture. AFM images are themselves reconstructions, there are no lenses involved and nobody see’s anything. The tip of a stylus hovers over the molecular surface measuring the atomic forces like some microscopic record player. The surface is scanned to create data that defines a height map, a terrain of numbers, mountains and valleys, which can be reassembled as 3D models. The sulphur orange images produced by the AFM are a particular manifestation of this process, they offer a level of certainty and familiarity – that’s what it must look like, all the way down there.

Robert L. Morris (Koestler Chair of Parapsychology at the University of Edinburgh 1985 to 2004) in a letter to the artist 21 October 1986.

Acknowledgement
The author wishes to thank Luis Girao for Max(MSP)ing out; Simon Lock for fiddling; Chris Saunders for the processing; Lee Nutbean for the particles; Justin Roberts for Flashing; Wolfang Fiel for the ghost hunting; and Professor Genhua Pan at the Wolfson Nanotechnology Laboratory at Plymouth University for the AFM scan.

Mike Phillips is Professor of Interdisciplinary Arts, Plymouth University, School of Arts & Media,Faculty of Arts. He is the Director of Research at i-DAT, an Arts CouncilEngland National Portfolio Organisation, and a Principal Supervisor for thePlanetary Collegium. His R&D orbits digital architectures and transmedia publishing, and is manifest in a series of ‘Operating Systems’ that dynamically manifest ‘data’ as experience to enhance perspectives on a complex world. He manages the FulDome Immersive Vision Theatre (IVT), a transdisciplinary instrument for the manifestation of material, immaterial and imaginary worlds and is co-editor of Ubiquity, The Journal of Pervasive Media: http://www.ubiquityjournal.net/ These projects and other work can be found on the i-DAT web site at: http://www.i-dat.org. View all posts with Mike Phillips →