In the beginning was the noise. 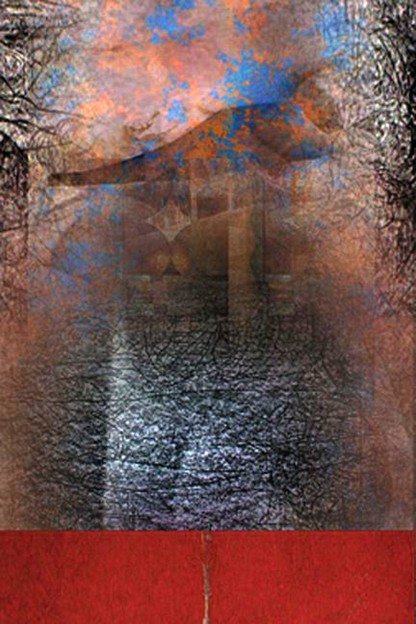 The idea of unseen/seenness re-opens the production of subjectivity in art by affirming the applicability of multiplicity. I will explore this issue using my computer-robotic assisted painting becOming multiple as example as it demonstrates aspects of latent excess. The idea of latent excess re-establishes an ambiguously private critical distance for the art viewer: a distance achieved through the connective disparity between pleasure and frustration.

I believe that my painting becOming multiple shows that an unseen/seen art is possible and even indispensable to us now by demonstrating what an art of latent excess might look like. For me, an unseen/seen art problematizes the pop simulacra and hence enlivens us to the privateness of the human condition in lieu of the fabulously constructed social spectacle that engulfs and (supposedly) controls us. This private unseen/seen separateness offers us a personal critical distance (gap), and thus another perspective on (and from) the given social simulacra.

Such an unseen/seen art of phantasmagorical latent excess might provide us with two essential aspects relevant to our lives. First, it can provide a private context in which to suitably understand our simulacra situation. Secondly (but more importantly) it may then undermine this understanding of the simulacra by overwhelming our immersion in the customary simulacra – along with our own prudent pose as observer and judge. Through the destructive-creative bacchanalia at the root of an art of unseen/seen latent excess, we are prodded to lose our position of detached observer, As such, becOming multiple demands our engaged intellectual and perceptual production.

For me, an unseen/seen art like becOming multiple, when latently excessive in its own right, is capable of functioning, paradoxically, by nurturing in us a sense of polysemic uniqueness and of individuality brought about through a counter-mannerist style of reproducibility (circuitous, excessive and décadent). It is a style that takes us from the state of the social to the state of the secret distinguishable I, by overloading ideological representation to a point where it becomes almost nonrepresentational. The psychic rhizome around becOming multiple is regularly swarming itself into being as micro and macro factors attract. One cannot declare in advance what its limiting confines are or where it will or will not operate, nor what may become connected and tangled up in the rhizome’s multiple dimensions because the connections do not inevitably plait common types together.

This acknowledged probing at the outer limits of recognizable art representation, the excited all-over fullness and fervor of this syncretistic probe, isn’t a failing of communications within the excessive terms of becOming multiple then; it is its subject.

I would like to next explain a bit of how becOming multiple functions as unseen/seen art, while simultaneously promoting the aesthetics of obscurity.

Since 1986 Joseph Nechvatal has worked with ubiquitous electronic visual information, computers and computer-robotics. His computer-robotic assisted paintings and computer software animations are shown regularly in galleries and museums throughout the world. From 1991-1993 he worked as artist-in-resident at the Louis Pasteur Atelier and the Saline Royale / Ledoux Foundation's computer lab in Arbois, France on The Computer Virus Project: an experiment with computer viruses as a creative stratagem. In 2002 he extended that artistic research into the field of viral artificial life through his collaboration with the programmer Stéphane Sikora. Dr. Nechvatal earned his Ph.D. in the philosophy of art and new technology at The Centre for Advanced Inquiry in the Interactive Arts (CAiiA) University of Wales College, Newport, UK where he served as conference coordinator for the 1st International CAiiA Research Conference entitled Consciousness Reframed: Art and Consciousness in the Post-Biological Era (July 1997); an international conference which looked at new developments in art, science, technology and consciousness. From 1999 to 2013, Nechvatal taught at the School of Visual Arts in New York City (SVA). His book of essays Towards an Immersive Intelligence: Essays on the Work of Art in the Age of Computer Technology and Virtual Reality (1993-2006) was published by Edgewise Press in 2009. In 2011 his book Immersion Into Noise was published by the University of Michigan Library's Scholarly Publishing Office in conjunction with the Open Humanities Press. His Punctum Press book/cd project (ed.) Minóy is available here:http://punctumbooks.com/titles/minoy/ His archive is housed at The Fales Library (Downtown Special Collection) at N.Y.U. in New York City. Collected essays from Hyperallergic are at: http://hyperallergic.com/author/joseph_nechvatal/ http://www.nechvatal.net View all posts with Joseph Nechvatal →