GREEK GEMATRIA SERIES (I and II) The ‘Greek Gematria series’ are a series of artworks (screen prints (series 1) and mixed media works (series 2)) that aim to visualize the dialectics between reason and romanticism, between unity and plurality, and between science and a secular, naturalistic form of “spirituality.” Following in the tradition of the Greek bards and Pythagorean philosophers, these works utilize symbolism, mythology, and visual parables in order to call to mind the deep mysteries of the cosmos – both those which have been revealed to us through modern science, as well as those which remain beyond the grasp of our current scientific understanding. 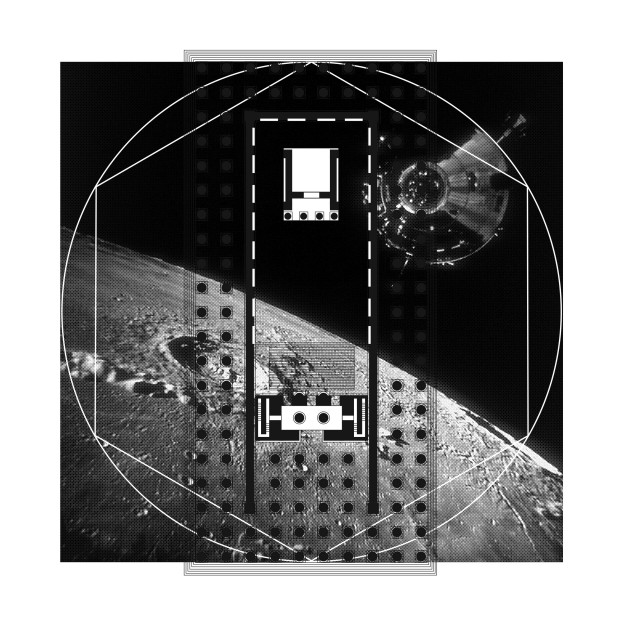 Whereas most of the great astronomers, cosmologists and philosophers throughout history have sought to bridge the gap between rational knowledge and spiritual insight, the elemental Weltanschauung of our age is based on the philosophy of materialism, the notion that physical matter alone forms our one and ultimate reality. While this ideology has given rise to the most prosperous age in human history, one marked by revolutionary and exponential developments in science and technology, it has also led, in part, to our present cultural ethos of commercialism, which is dedicated to creating efficient consumers and wage earners, as opposed to the focus of more ancient traditions on the quest for deeper insight into the mysteries of being and cosmos. Thus, if we accept that modern naturalism, materialism, and scientific realism are indeed able to provide us with the “best possible account” of our physical reality, why, then, do we continue to lament the loss of our mythologies and long for a world “re-enchanted” by the nonmaterial principles of harmony and ‘spirit’? Or, as philosopher John Searle puts it, “How do we reconcile our self-conception as mindful, conscious, free, rational, social, language-speaking agents … with a picture of reality as consisting entirely of mindless, meaningless, physical particles?” 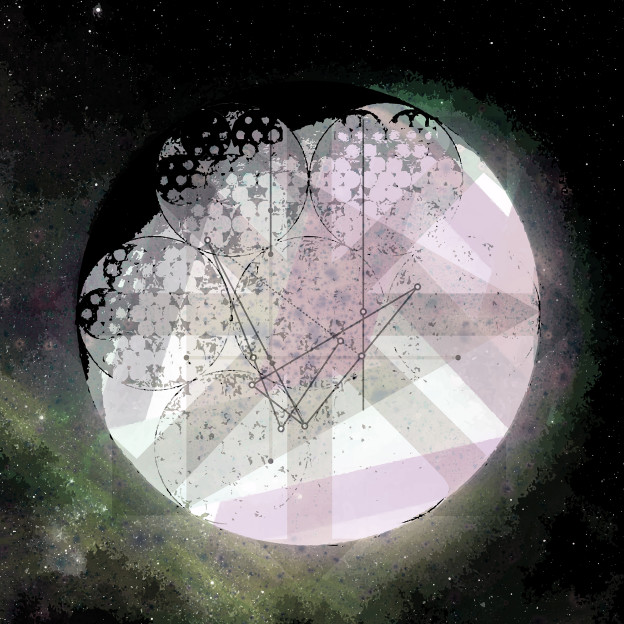 In my own artistic practice, and particularly in this series of works that combines, overlays, and juxtaposes the mythological with the scientific, it is precisely this “reconciling of the irreconcilable” that I aim to achieve (despite, what I would consider to be the inherent impossibility of such a task). In ‘Harmony of the Sun’ (top left), I have drawn from the Greek symbolic cosmology, using gematria (a system of substituting for a particular word another word whose letters give the same numerical sum) and geometry together to infuse our modern imagery of the sun with the breath of “divinity” that it once held to the ancients. Similarly, in ‘Temple of Apollo at Didyma,’ I contrast the “cosmic temple” of Apollo with an image of the Apollo lander, oscillating between a commitment to scientific reductionism and spiritual sanctification. In some sense, these images echo the attempt in my creative practice to develop a visual language devoted to an “naturalistic spirituality” – a ‘structure of feeling’ that denies the the supernatural while embracing the supranatural. What I have tried to express through images, Einstein summarized most eloquently with words:

“The most beautiful thing we can experience is the mysterious. It is the source of all true art and science. He to whom the emotion is a stranger, who can no longer pause to wonder and stand wrapped in awe, is as good as dead — his eyes are closed. The insight into the mystery of life, coupled though it be with fear, has also given rise to religion. To know what is impenetrable to us really exists, manifesting itself as the highest wisdom and the most radiant beauty, which our dull faculties can comprehend only in their most primitive forms — this knowledge, this feeling is at the center of true religiousness.” 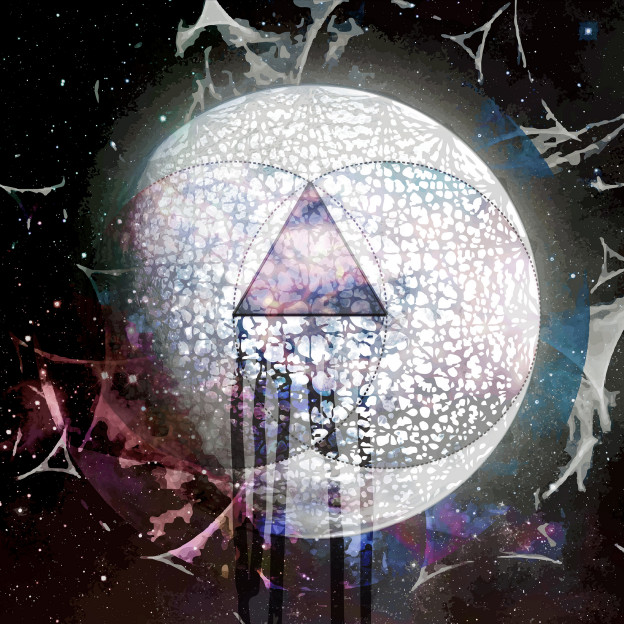 On the Possibility of an Absolute (2015) 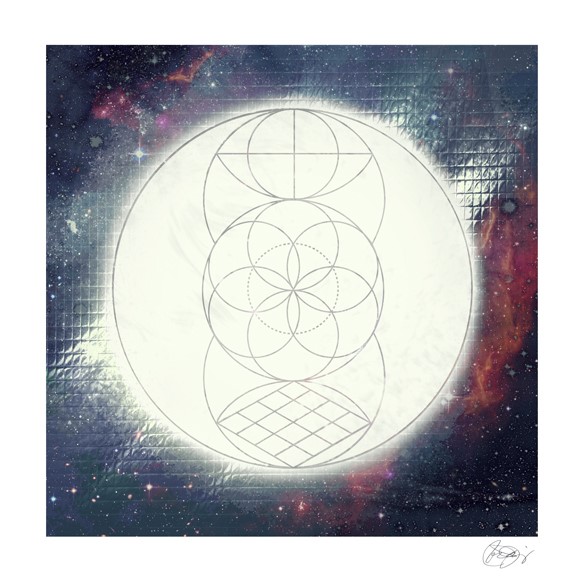 A selection of these works was recently shown as part of the Lumen collective’s Aether exhibition at the UAL showroom in London from April to July 2015. Aether was themed on the subject of Earth as a fragile organism, and was co-curated by UAL alumni Melanie King and Louise Beer. http://events.arts.ac.uk/event/2015/4/7/Aether/&book=true The series of works collectively titled ‘Metamodern Experiments’ was completed over a thirty-day period from January 12 to February 10, 2015. Primarily digital works with some mixed media, each artwork was completed in a single day, each with its own concept(s) or theme(s). Taken together, the series represents the dialectical nature of my current practice and the intellectual themes at the core of my current research: eg. “permanent revolutions” (Popper); “secular spirituality” (de Botton, Grayling, Sagan); and “metamodernism” (van den Akker and Vermeulen).

While the collection of works is intentionally eclectic, for each piece I have taken as a starting point the following ‘Metamodernist // Manifesto’ (Luke Turner, 2011): 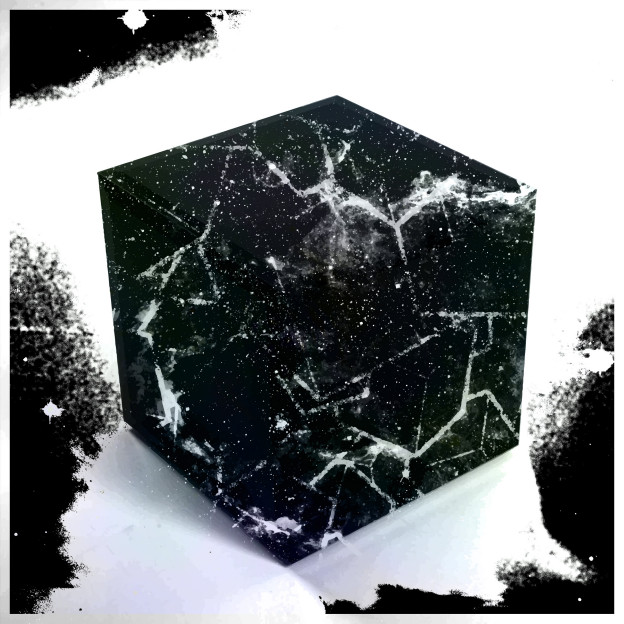 1. We recognise oscillation to be the natural order of the world.

2. We must liberate ourselves from the inertia resulting from a century of modernist ideological naivety and the cynical insincerity of its antonymous bastard child.

3. Movement shall henceforth be enabled by way of an oscillation between positions, with diametrically opposed ideas operating like the pulsating polarities of a colossal electric machine, propelling the world into action.

4. We acknowledge the limitations inherent to all movement and experience, and the futility of any attempt to transcend the boundaries set forth therein. The essential incompleteness of a system should necessitate an adherence, not in order to achieve a given end or be slaves to its course, but rather perchance to glimpse by proxy some hidden exteriority. Existence is enriched if we set about our task as if those limits might be exceeded, for such action unfolds the world.

5. All things are caught within the irrevocable slide towards a state of maximum entropic dissemblance. Artistic creation is contingent upon the origination or revelation of difference therein. Affect at its zenith is the unmediated experience of difference in itself. It must be art’s role to explore the promise of its own paradoxical ambition by coaxing excess towards presence.

6. The present is a symptom of the twin birth of immediacy and obsolescence. Today, we are nostalgists as much as we are futurists. The new technology enables the simultaneous experience and enactment of events from a multiplicity of positions. Far from signalling its demise, these emergent networks facilitate the democratisation of history, illuminating the forking paths along which its grand narratives may navigate the here and now.

7. Just as science strives for poetic elegance, artists might assume a quest for truth. All information is grounds for knowledge, whether empirical or aphoristic, no matter its truth-value. We should embrace the scientific-poetic synthesis and informed naivety of a magical realism. Error breeds sense.

8. We propose a pragmatic romanticism unhindered by ideological anchorage. Thus, metamodernism shall be defined as the mercurial condition between and beyond irony and sincerity, naivety and knowingness, relativism and truth, optimism and doubt, in pursuit of a plurality of disparate and elusive horizons.