Richard Bright: Can we begin by putting your work into context, and talk about drawing. William Coldstream, whose approach to depiction was of a measured, direct observation, once remarked “I lose interest unless I let myself be ruled by what I see”. Your approach is different, it’s more to do about how the mind processes what the eye sees, involving imagination and the how the circumstances at the time affect the process of looking. Would that be a fair comment?

Dryden Goodwin: I’m interested in attempting to decode the world, the places I move through and the people I encounter within it. As an artist I might use drawing, or work with a camera or collect sound. I’m also fascinated in how people from other disciplines approach the process of looking and interpret what they’re looking at. How they also build or intuit a wider picture from what might be hidden or out of sight. I’m intrigued in how as human beings we create tools and methodologies to allow us to look at different scales, for different reasons and for different things, allowing us to try and address questions fundamental to being human beings. How sometimes human beings manage to transcend the limitations of the tools and materials that are being used, to reveal more than can be seen. The flip side of this is the fallibility of looking, how the intention behind what we’re looking for, can shape or even restrict what we see, and the role of the imagination in this, the influence of our emotional and psychological state on what and who we’re looking at, sometimes clouding and other times allowing us to see further and deeper.

RB: How did your time drawing in a life studio feed into your work with video, which engages with time as well as line?

DG: A sense of the speculative nature of looking, and recording what you think you see, how everything is never still. Although you might have the desire to try and hold or capture something, it keeps changing. That there is a privilege in looking intensely at someone and an ever shifting balance between the subjective and objective. The life room felt at times under laboratory conditions, and with this, the potential to investigate, to look in very focused ways, adopting different systems, like tuning into specific frequencies. Then becoming completely lost and overwhelmed, I like the idea of switching between being hyper conscious of the elements at play and then completely involved and immersed.  It’s possible to form a kind of fragmented composite of an experience, while looking at someone or something or somewhere. As an antidote to the life room, I’m fascinated with this idea of being in situations which are beyond your control and trying to find ways and means to engage with that, not only with what you see, but also with what you feel or what you experience in a more holistic way. I’m interested in different approaches to looking at the world. That sense of trying to find a way of decoding or articulating beyond what you see with your eyes – translating what you might feel with your body or with your emotions. It’s great and terrifying to be out of your depth and move into uncharted territory. 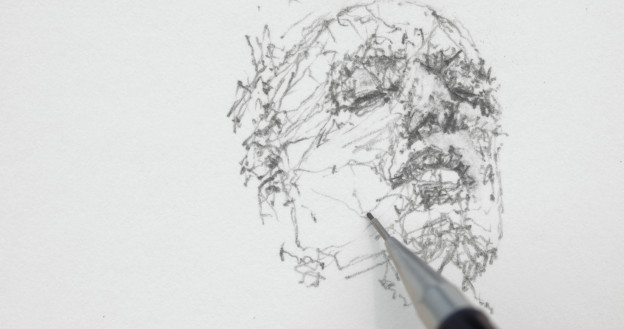 RB: You have consistently focused on the human figure and the portrait form. Why?