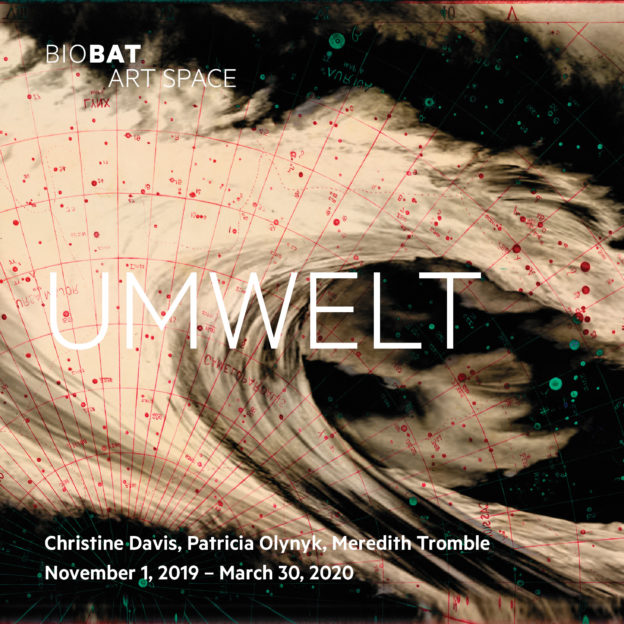 Umwelt a three-artist exhibition at BioBAT Art Space, takes the concept of collaboration to new heights and complications. It exposes the multilayered work of artists who engage with the sciences while offering visitors a nuanced view of what science both is and can be. Meredith Tromble, Patricia Olynyk, and Christine Davis are established artists who approach science as material for art. They have individually worked directly with scientists: as residents in their labs, as observers of scientific proceedings, as interviewers treating scientists as informants, and as direct co-creators of artworks. This collaborative presentation offers the opportunity to think about the different approaches that artists are taking to work with science in the new wave of art-science interactions and collaborations that is now well underway.

The complexities of science that these artists are investigating are reflected in the title of the exhibition. The concept of “umwelt,” as described in the semiotic theories of Jakob von Uexküll and interpreted by Thomas A. Sebeok (1976), is the world as it is experienced by a particular organism. As such, umwelt evokes more than environment; it emphasizes an organism’s ability to sense—a condition for the existence of shared signs. These signs offer meanings about the world, albeit of divergent sorts, to different types of organisms or even individual beings. Umwelt also calls attention to the specific senses that different organisms use to make meaning from their environments, including signs made by other organisms.” 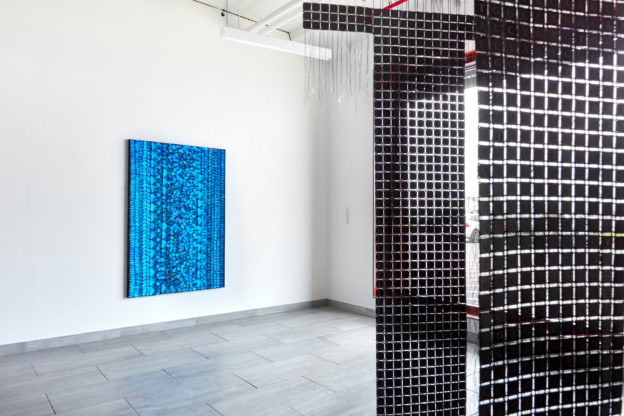 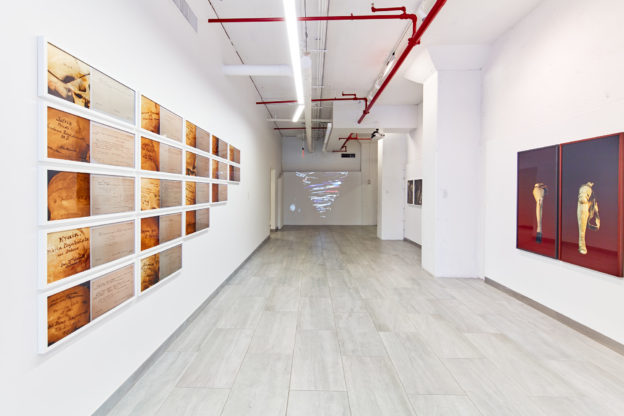 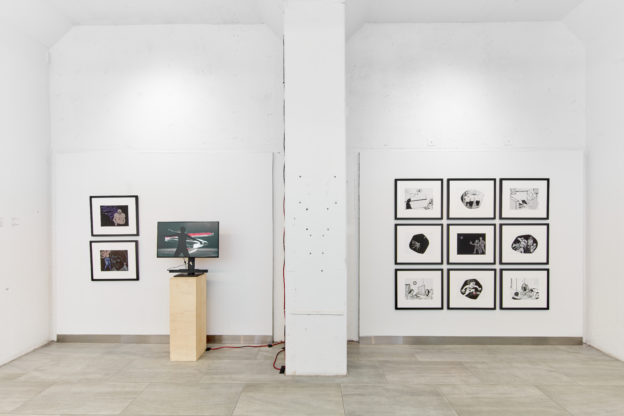 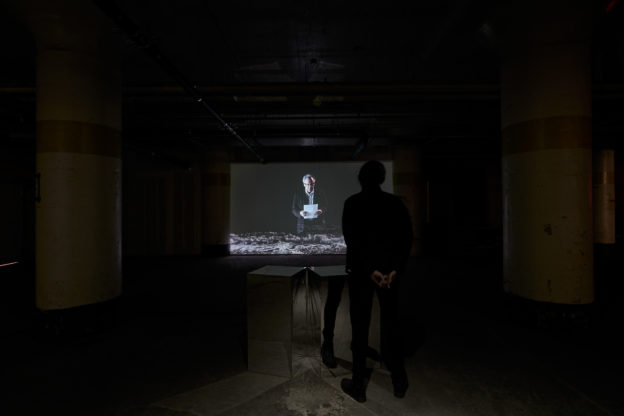 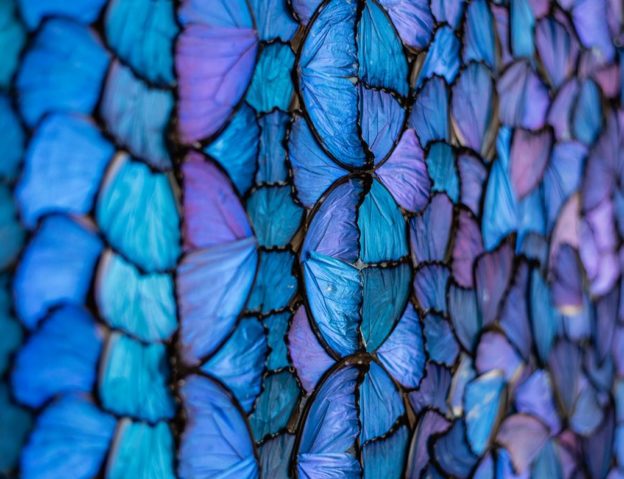 Christine Davis: Tlön, or How I held in my hands a vast methodical fragment of our planet’s entire history , 2019 Ethically sourced butterfly wings on black gessoed canvas, detail. (Photo by: David Chuchuca)

Christine Davis is a Canadian artist born in Vancouver. She currently lives and works in New York City. Modes of seeing, classifying and producing both scientific and cultural knowledge, often tied to the feminine and the natural world, underpin many projects. Through a cosmological impulse Davis’ installations seem to propose that meanings from disparate historical and pedagogical contexts overlap and are released slowly over long periods of time. In her work “Tlön, or How I held in my hands a vast methodical fragment of an unknown planet’s entire history” (exhibited at the Musee de Beaux Arts de Montreal) documentation of the heavens and classification of wildlife are overlaid in a system of ordering and symmetry that is at once mystical and sadistic, absurd and universal. As film scholar Olivier Asselin notes, “Davis’ work establishes a link between artistic abstraction and scientific abstraction – between formal abstraction and conceptual abstraction. [F]orm is chaotic; it is one of those complex phenomena, like climate change and liquid turbulence, which are determinate, but non-linear, and, as a result, remain largely unpredictable. As such, it prompts an epistemological reflection on the complexity of the sensible and the limits of the concept… from this perspective, her work is archaeological.” Exhibiting since 1987 Her work is held in numerous collections including the National Gallery of Canada, Le Muse d’Art Contemporain de Montréal, Collection Helga de Alvear and the Yvon Lambert Collection Avignon. Publications on her work include monographs published by CREDAC (Paris), MACM (Montreal), AGO (Toronto) and Presentation House (Vancouver).

Patricia Olynyk is a multimedia artist, scholar and educator whose work explores art, science and technologyrelated themes that range from the mind-brain to interspecies communication and the environment. Her prints, photographs, and video installations investigate the ways in which social systems and institutional structures shape our understanding of science, human life, and the natural world. Working across disciplines to develop “third culture” projects, she frequently collaborates with scientists, humanists, and technology specialists. Her multimedia environments call upon the viewer to expand their awareness of the worlds they inhabit—whether those worlds are their own bodies or the spaces that surround them. Olynyk is the recipient of numerous awards and distinctions, including a Helmut S. Stern Fellowship at the Institute for the Humanities, University of Michigan and a Francis C. Wood Fellowship at the College of Physicians, Philadelphia. She has held residencies at UCLA’s Design Media Arts Department, the Banff Center for the Arts, Villa Montalvo in California, and the University of Applied Arts, Vienna. Her work has been featured in Venice Design 2018 at Palazzo Michiel, Venice; the Los Angeles International Biennial; the Saitama Modern Art Museum, Japan; Museo del Corso in Rome; and the National Academy of Sciences in Washington. Olynyk is Chair of the Graduate School of Art and Florence and Frank Bush Professor of Art at Washington University and co-director of the Leonardo/ISAST NY LASER program in New York. Her writing is featured in publications that include Public Journal, the Routledge Companion to Biology in Art and Architecture, Technoetic Arts, and Leonardo Journal. 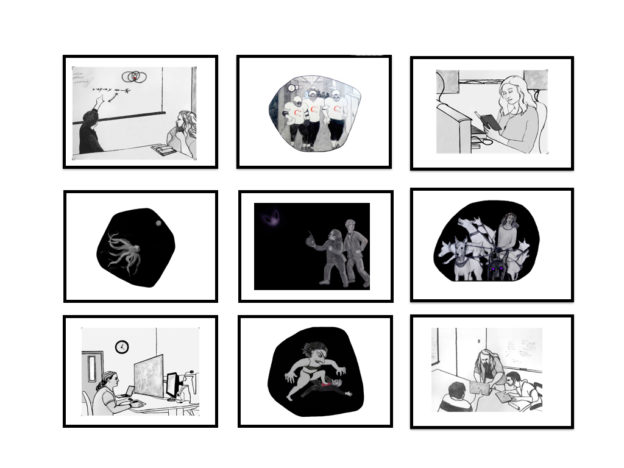 Meredith Tromble is an Oakland-based intermedia artist and writer whose curiosity about links between imagination and knowledge led her to form collaborations with scientists in addition to making installations, drawings, and performances. A central theme in her work is circulation: between ideas and materials, through collaborative creative process, from psychological impulses through images and texts. Her work asserts the continuity between the physical and virtual worlds. She has made drawings, installations and performances for venues ranging from the Yerba Buena Center for the Arts and Southern Exposure in San Francisco, to the National Academy of Sciences in Washington, D.C. and the Glasgow School of Art in the UK. She has been artistin- residence at the Complexity Sciences Center at the University of California, Davis (UCD), since 2011 in active collaboration with UCD geobiologist Dawn Sumner. Their interactive 3-D digital art installation Dream Vortex has been widely presented in various iterations at ISEA2015, Vancouver, and Creativity & Cognition, Glasgow School of Art, and at more than a dozen American universities ranging from Stanford University in Palo Alto to Brown University in Providence. Dream Vortex was chosen as an “Exemplar Project” of interdisciplinary research by the Association for the Arts in Research Universities (a2ru) in 2015. A related performance project, The Vortex, in collaboration with Donna Sternberg and Dancers of Los Angeles, had weekend runs in Los Angeles in 2016 and 2018. Tromble’s other recent projects include an art installation developed with a neuroscientist at Gazzaley Lab, University of California San Francisco, and performance/lectures by “Madame Entropy.” Her 2012 blog “Art and Shadows,” on contemporary art and science, was supported by the Art Writers Initiative of the Andy Warhol Foundation. From 2000-2010 she was a core member of the artist collective Stretcher; and made flash “guerrilla” performances using a mechanism based on the research of biologist Larry Rome to generate electricity from the motion of her body.

BioBAT ArtSpace was conceived to serve the communities of Sunset Park and Bay Ridge through the advancement of STEAM education by using the arts to connect science, technology, engineering and math. Art programming and exhibits will be designed to foster dialogue and cultivate a community space that will introduce the advanced sciences to local schools and community members. We believe that the arts can be used to enhance creative and critical thinking, can make connections across disciplines, and nurture future generations of innovators. https://biobat.nyc/ View all posts with BioBat →