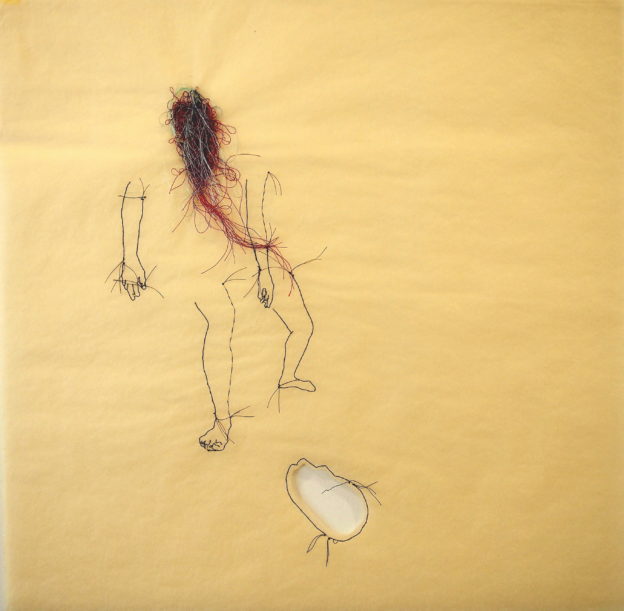 Richard Bright: Your drawings are comprised of hand-stitched figures on architectural trace paper. Can you say more about this process and what inspired you to employ architectural papers in your drawing?

Wura-Natasha Ogunji: I had the idea to stitch on paper after seeing a poem my sister (who is also an artist) had stitched into the collar of her shirt.  The stitched letters were so beautiful.  I can still picture the grey letters against the blue fabric.  My first stitched piece was a story about my father’s death, with images and text sewn into sheets of painted composition paper.

I began using the tracing paper quite by accident.  I was hiking with a friend and saw this small roll of paper on the path.  I picked it up and was entranced, and then put it back down because I thought the person who had dropped it might return to look for it.  My friend smiled and said, “I think that’s for you.”  I’ve been using it ever since. RB: You have also made drawings using both sides of trace paper. Can you say more about this process and the reasoning behind it?

W-NO: It’s really about beauty.  I love stitching from both sides of the tracing paper. The knots, hanging threads, distortions in the image itself are so enticing.  There’s something so poetic about the simplicity of that underside and the weight of the mistakes that I find gorgeous and also intriguing. RB: You have said that a lot of your work, particularly your performance and video work, is done through your body as a way of understanding larger questions of how bodies engage with space. Can you say more about this?

W-NO: A lot of what we know about the world, our belief systems and experiences become part of our physical makeup.  I’ve always felt a strong appreciation for my own physicality–from playing outside as a child and all that that entails to becoming a runner as an adult. Sometimes when I’m running I close my eyes. I did this as a child as well. It’s quite amazing how your body knows the road, knows the path without your eyes, or even without needing to ‘say’ anything at all in words.  Artists, of course, understand the world in this way so much of the time.

Many of the videos and performances begin with a question which I know can only be answered through the body.  The Ife head videos emerged from a question I had about how an ancestor in Africa might return to her descendents in the Americas.  How would a spirit (in my body) cross the ocean?  I thought, ‘You can walk on water’, or ‘You can fly.’  So I tried both.

My performance work is largely about the presence of women in public space in Lagos, Nigeria. How do you talk about freedom of movement and presence without actually having that experience?  The performances are designed to give women an unprecedented experience of freedom in public space. This means they allow the performers to move through the streets, including in a busy market, and have people move out of the way, have the crowds actually defer to them.  This is something that most women in the world never experience–to move through space and have people clear the path, and not because they’re being asked to make room or get out of the way, but because instinctively they know they must do it.  It’s not a question of if or even why, it’s a given for them.  This is deeply related to our beliefs and traditions around ‘masquerade.’  I use that word for lack of a better way to translate because masquerade suggests the putting on of a costume, of wearing a face that is not your face, but that superficially and physically covers you.  But here, if we take the ancestor ceremony called Egungun as an example, we see that the dance, the procession brings a spirit into a community.  You are not watching a person pretend to be something.  I don’t think it would be correct to say that the person who is dancing embodies the spirit because that suggests some king of separation between spirit and flesh.  When you see Egungun dance you are looking at the ancestor.  The ancestor is present before you.

In the case of my performances, I am using and complicating this system because I am asserting that the masked women have power and status and presence equal to Egungun, while at the same time it is most often clear that they are women.  We see costume and also flesh.  In one performance, Strut (2016) a child asked one of the performers, “Are you angels?”  He meant that sincerely, as he very well understood the power and energy he was witnessing in the streets. RB: What can you also say about the concept of space in your drawings?

W-NO: I started out as a photographer which certainly informs how the drawings are composed. Open space allows the images to breathe in a certain way, allows our eyes to make other connections beyond what is contained in the physical marks.  I’m also thinking a lot about the space of the sea, the Atlantic.  It’s an architecture, a space in my imaginary which also structures the field of the drawing.  The geographic orientation of being from the United States, but also Nigeria has created a physical map in my mind which also serves as the ground of the paper in my drawings. It’s this vast, infinite, open expanse. I often think about the empty space as water, river, ocean.  The open space separates and at the same time is full of history, memory, possibility. RB: Can you say something about your works, The proof, an undersea volcano, attraction, extraction, distraction and A luminous cloud, a night swim, the desert, always there for you (2017)?

W-NO: The titles of the drawings come to me right before or as I begin drawing.  These phrases guide the drawing process, not in an illustrative way, of course, but as an imaginative structure.  With both of these works I had been thinking about how to expand or explode the body, and what repetition of these bodily forms might suggest about movement and return. With ‘The proof…‘, the space of the paper, for me, is most certainly the sea, but of course there’s this contradiction and awkwardness of the body in this position under water.  Here, I also use the thread I have collected over the years and add it back into the piece.

A luminous cloud, a night swim, the desert, always there for you,
2017. Thread, ink, graphite on tracing paper
24 x 24 inches

W-NO: I’m doing some experiments with bronze casters here in Benin City.  It’s allowing me to think about the drawings as sculpture and environment. 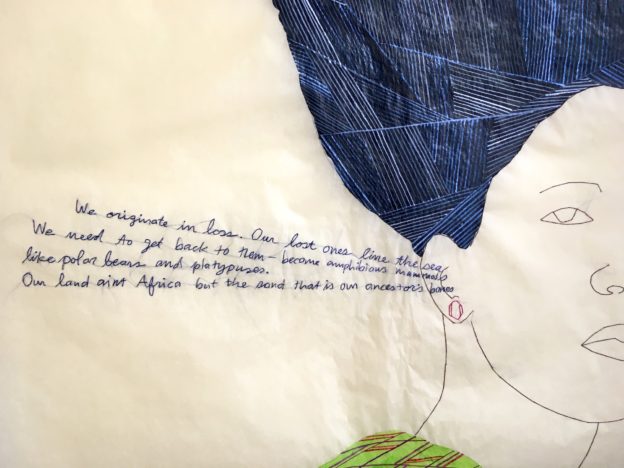 All images copyright and courtesy of Wura-Natasha Ogunji

Wura-Natasha Ogunji is a visual artist and performer. Her works include drawings hand-stitched into tracing paper, videos and public performances. Her work is deeply inspired by the daily interactions and frequencies that occur in the city of Lagos, Nigeria, from the epic to the intimate. Ogunji's performances explore the presence of women in public space; these often include investigations of labor, leisure, freedom and frivolity. Recent exhibitions include City Prince/sses at Palais de Tokyo; A Slice through the World: Contemporary Artists’ Drawings at Modern Art Oxford; and Every Mask I Ever Loved at ifa-Galerie, Berlin. She was an Artist-Curator for the 33rd São Paulo Bienal where her large-scale performance Days of Being Free premiered. She has also exhibited at: Astrup Fearnley Museet, Oslo; the inaugural Lagos Biennial; Kochi-Muziris Biennale; 1:54, London & New York; Seattle Art Museum; Brooklyn Art Museum; and Louisiana Museum of Modern Art, Denmark. Ogunji is a recipient of the prestigious Guggenheim Foundation Fellowship and has received grants from The Pollock-Krasner Foundation; The Dallas Museum of Art; and the Idea Fund. She has a BA from Stanford University [1992, Anthropology] and an MFA from San Jose State University [1998, Photography]. She currently resides in Lagos where she is founder/curator of the experimental art space The Treehouse. www.wuraogunji.com @wuraogunji View all posts with Wura-Natasha Ogunji →