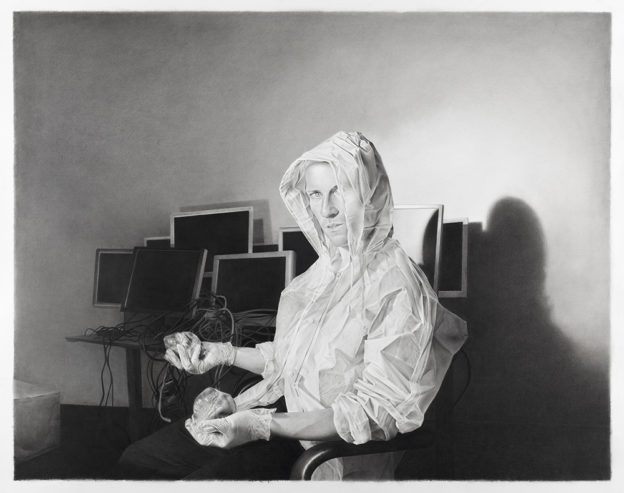 David Haines and the Black Mirror

Every new medium is a Russian doll.  The radio and the cinema sit inside every television, just as the television sits inside your smart phone.
Because there have been so many Russian dolls over the years, each containing the other, it’s easy to forget that the mirror is a medium, or that the simple act of making marks on paper is a technology. David Haines invites us to consider these things in the reflection of the black mirror. (1)

We carry the black mirror everywhere. It blindly reflects our image when it sleeps and every time we wake it up (with the swipe of a finger) it illuminates our desires. It sorts our personal chaos into order. The black mirror is a good servant. It files, classifies, orientates, and informs. In this respect the black mirror surpasses its master. Because the black mirror’s actions are unconscious, it is able to chart a map of the unconscious. 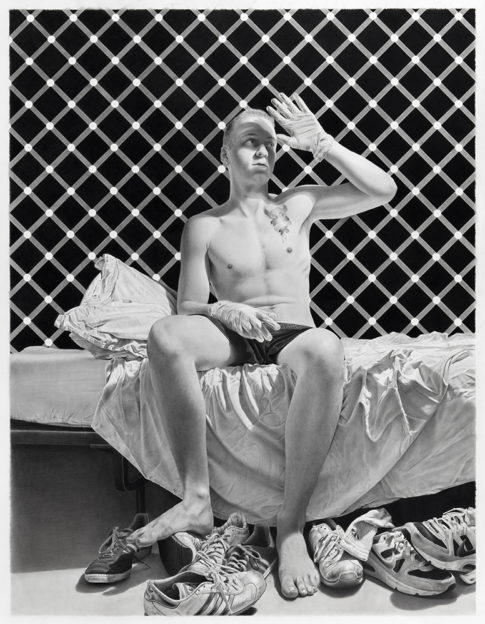 In a group of portraits, images taken from a cam sex site, a series of young men look at themselves. The view is parallax, Narcissus is refracted. A man, his face in repose, gazes at the camera on his laptop. To see himself he must look away from the eye that records his image. We see a boss-eyed double image through the layers of mediation, the video and the shiny glass, the code churning unconsciously beneath the surface.

We never see ourselves, and when we see ourselves the image we see is not part of us. You might catch your image on the surface of a still pond. You may surprise your self as you lope past a shop window; your image may move unexpectedly on a Skype call; you may see your ghost on the black mirror of a sleeping smart phone. Our image is always mediated, always de-centered. Our image is reserved for others and implicitly addressed to others. Because the black mirror extends us and because it surrounds us we forget that, like every interactive technology, the black mirror is a technology of self. It records an image of us whilst simultaneously constructing us, presenting us, and teaching us how to behave. 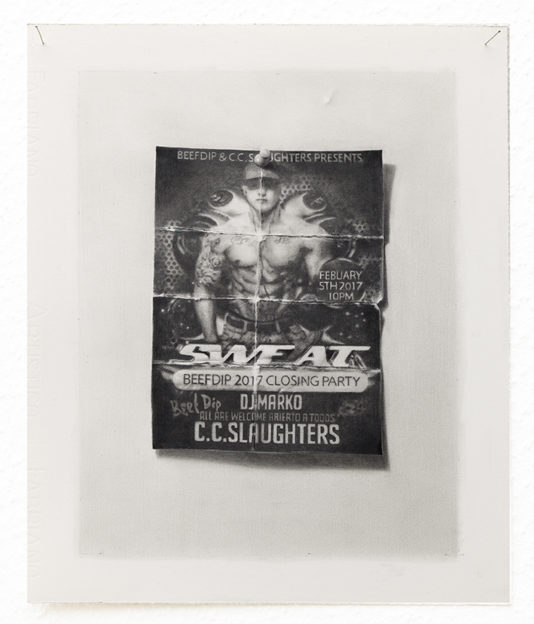 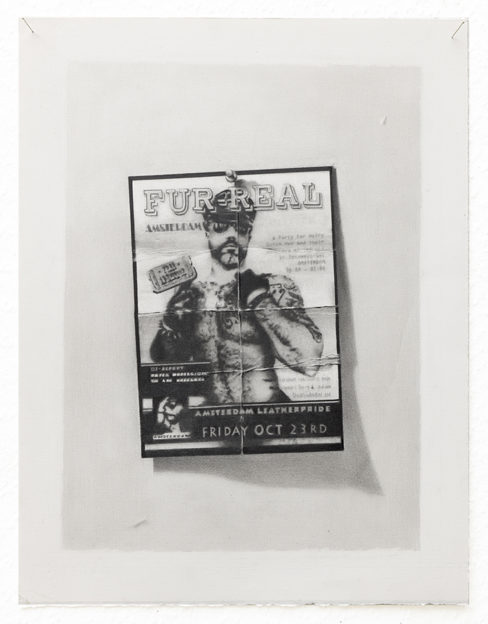 A series of Trompe-l’œil drawings, Still Lifes with Flyers, are unlike Haines’ other portraits, they do not survey an interior, subjective, space. The bodies are on display, they project an image produced explicitly for others. But the medium on which the image is carried tells a specific history. It records the wear and tear of being folded, it tells the story of its circulation as a medium; this is in turn translated into a drawing. 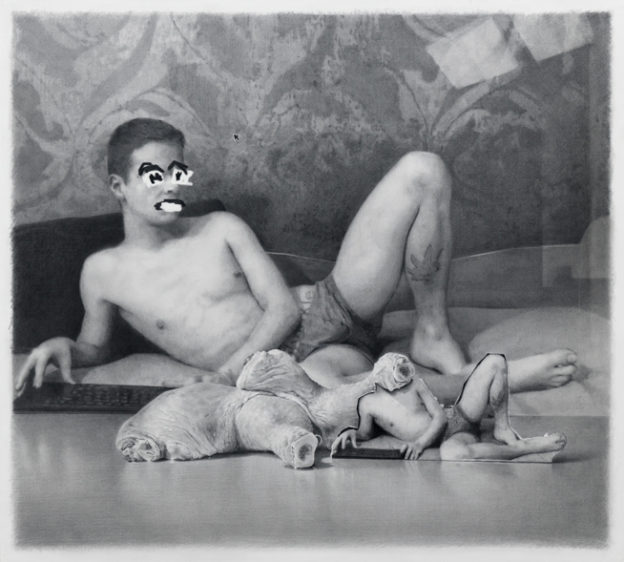 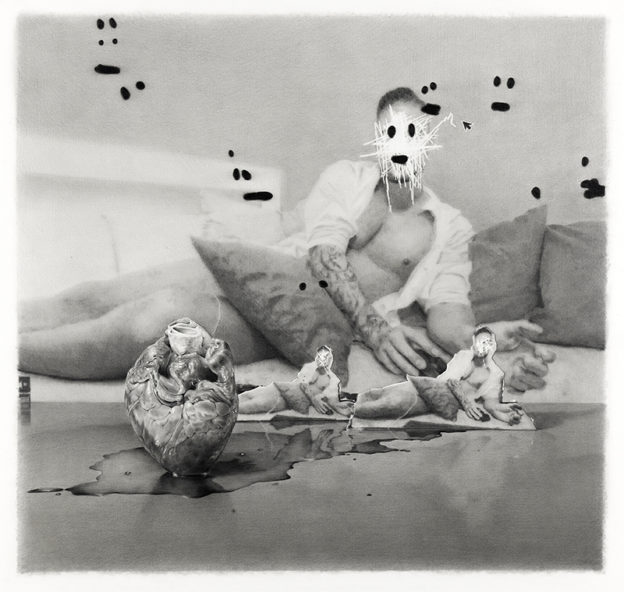 A further series of still life drawings, this time with  iPads, screens, cutouts, meat and bones takes this abstraction further. This is not a formal abstraction – in the sense that they divert from realistic depiction or break down into simple forms – but rather they invite us to read images of ‘real things’ on different registers: as things in ‘real space,’ as reflections of those things, as two dimensional cut-outs nested within a prospective three dimensional space. 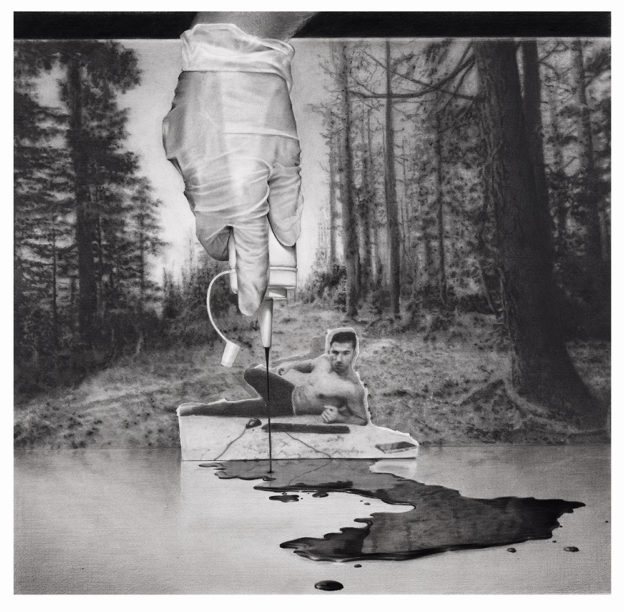 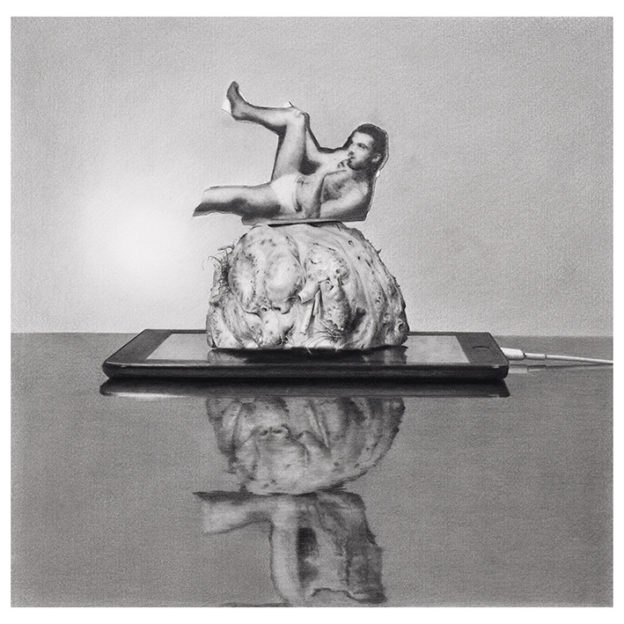 In the two large drawings Meatboy and Bob Starr  and Your Fluffer  the moiré pattern (the matrix of the printed image) slips between the register of dots and the register of an image. This is set against figures of a much finer definition where graphite and the grain of the paper tangle in a tight net of information. (2) 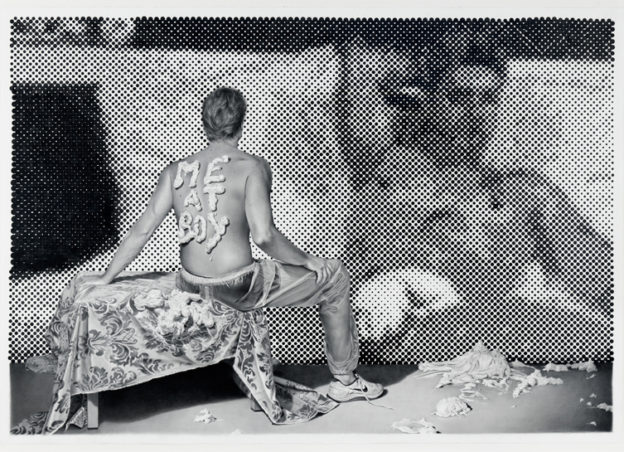 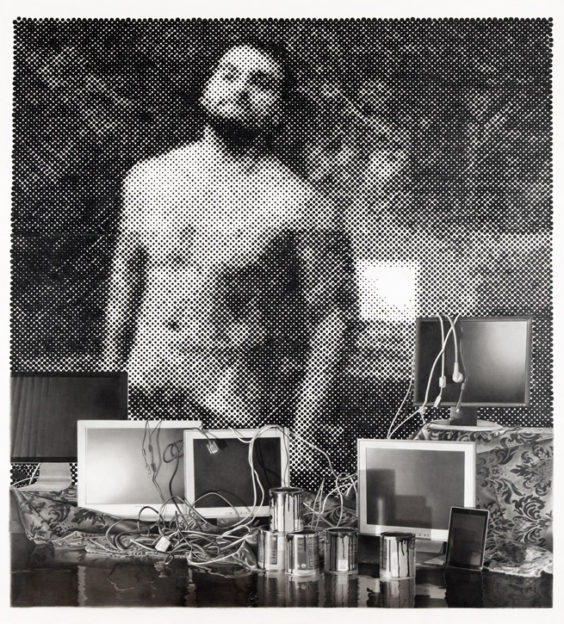 As we travel through the different levels of abstraction the subject is mediated and remediated. Of course, the image is not the thing it depicts, any more than the menu can be mistaken for the meal, or the map mistaken for the territory it charts.

In Haines’ work every medium reflects another but this does not leave us abandoned in a hall of mirrors because we are grounded in the materiality of the drawings, we are drawn to the specificity of the medium – this particular sheet of paper, these specific particles of graphite.If every image draws us to a receding horizon, beyond which the ‘real thing’ is situated, in Haines’ work we comprehend the different levels of abstraction that allow us to negotiate with the reflection of ourselves that is always fugitive, always extensive: a projection, a reflection, an image in process.

Steve Rushton’s Masters of Reality is published by Stemberg Press

(1) Charlie Brooker on his TV show Black Mirror: “If technology is a drug – and it does feel like a drug – then what, precisely, are the side-effects?” The Guardian 1/12/2011

(2) Here I use ‘abstraction’ in the sense Gregory Bateson’s used it in Steps to an Ecology of Mind (1972) and Mind and Nature (1980). Bateson’s notion of abstraction provides the basis for a holistic aesthetic and ecological epistemology. Bateson identifies Alfred Korzybski as the originator of the phrase the map is not the territory.

David Haines, when I gaze at his works and, more often than not, covet them, remains a strange artist. There is really no point in going into his methods and techniques, into their enigmatic virtuosity and untiring capacity to present so much complex and, I guess, labour-intensive surface treatment as a true sight, or a bewildering delight. The relation between what must have been his absorption in the finding and then the making of the images and our oh-so rapid absorption of them and by them is unsettling in its asymmetry. It generates both turbulence and desire in turbulence, crafting each time a singular enigma of our own desiring. 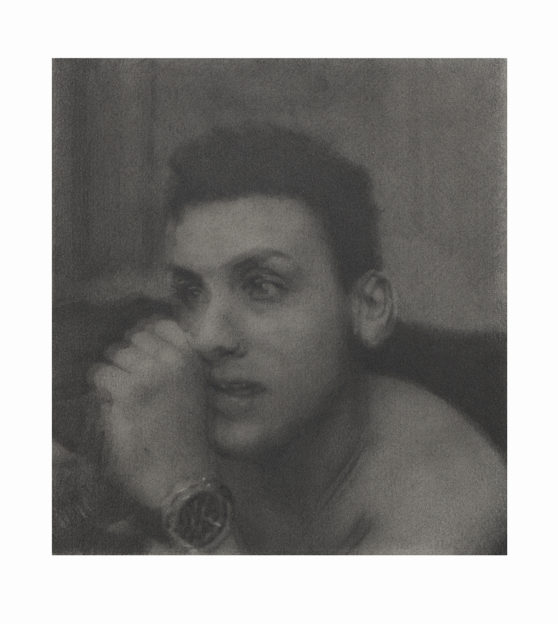 But in these drawings of faces and torsos something new has appeared before us, befallen our look. Until now Haines work has presented a recognisable iconography, hermetic, secretive, as unyielding in its private use of the plethora of public images from the internet, their fragments or their apparent stories, as it was relentless in its extreme exploitation of what we trivially call representation or realism, alluring in the ways that it made precision itself into a near delirium. You could then think, at the same time, of the Signorelli of his Last Judgement or the arcane assemblage of a cabinet of curiosities; 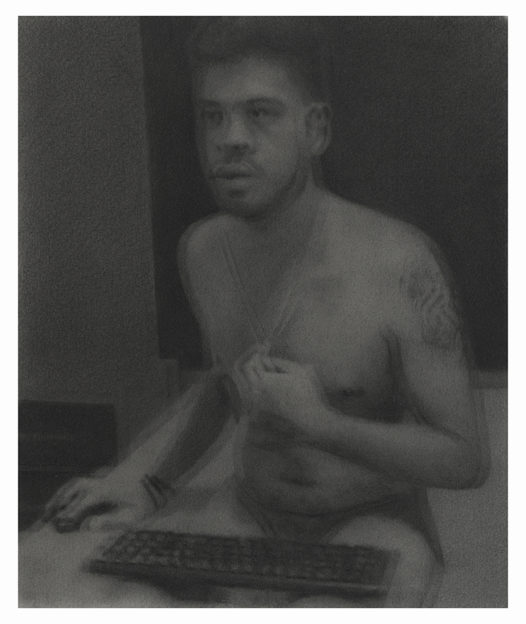 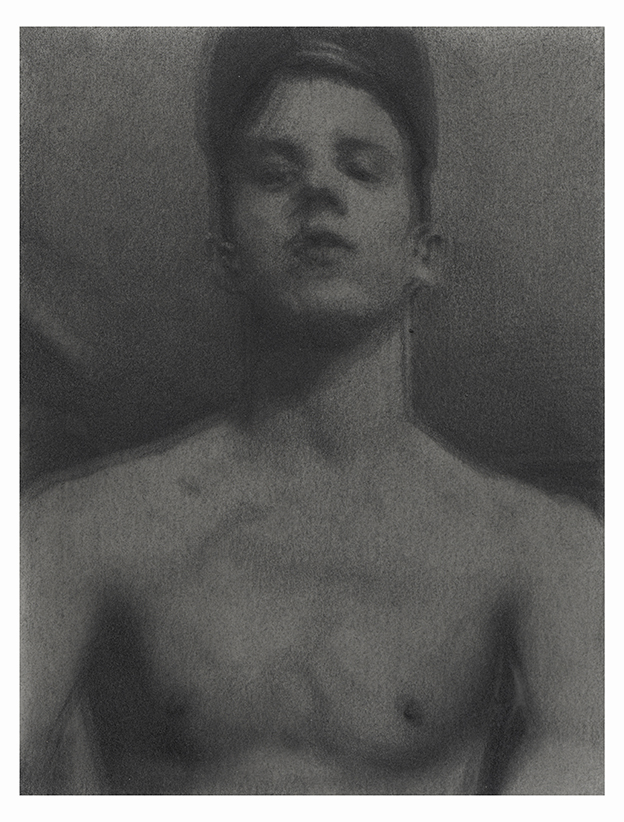 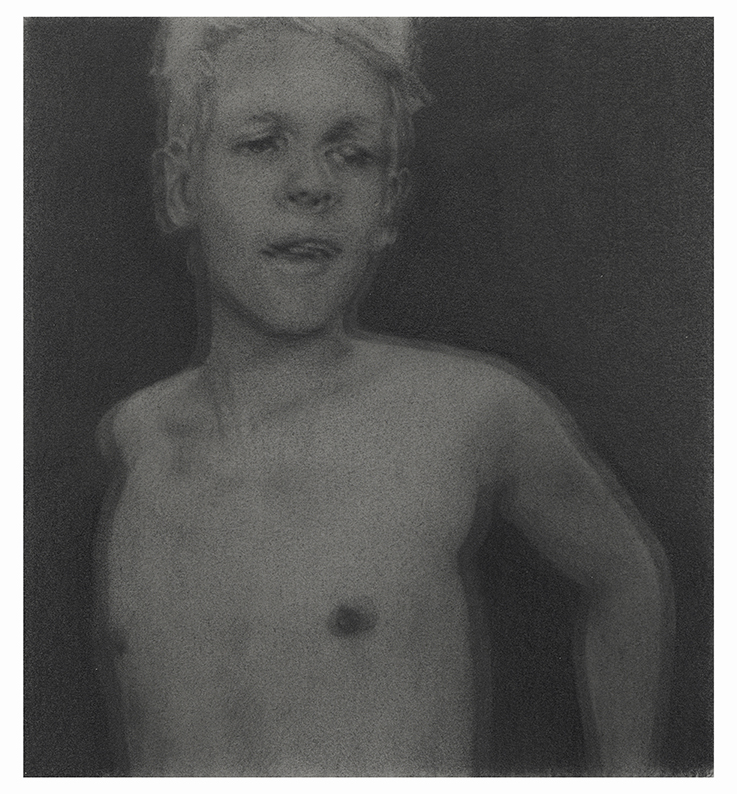 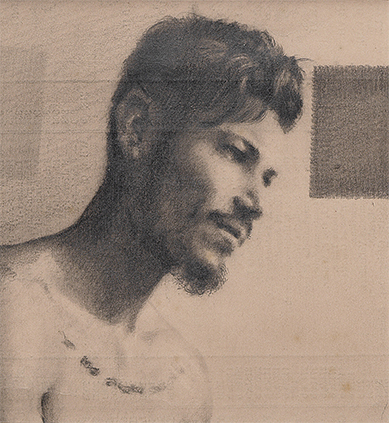 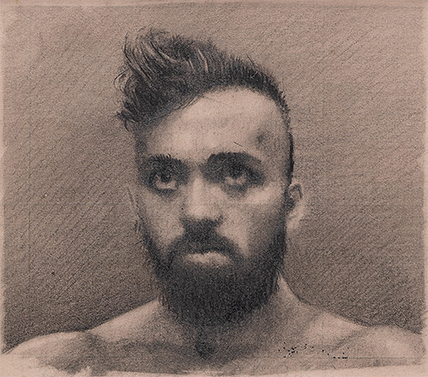 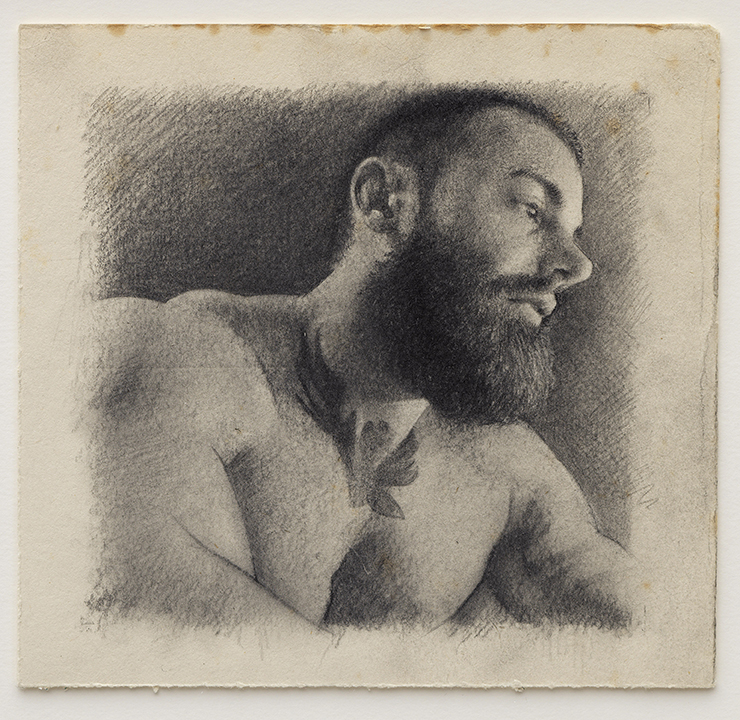 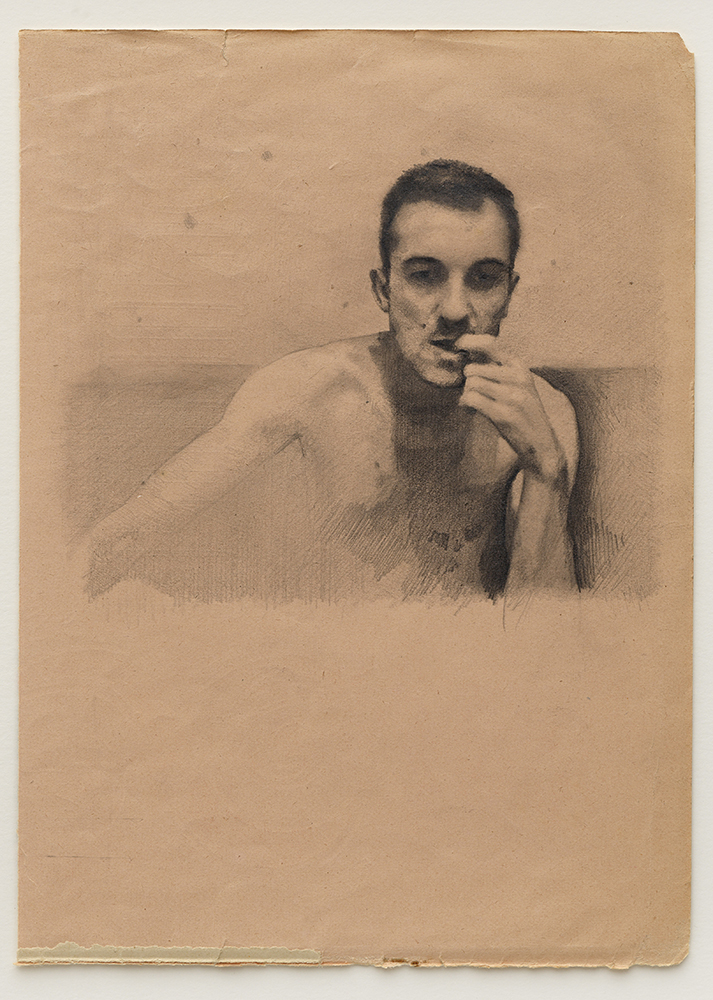 But here the single figure or body or face, albeit adorned with textures and tattoos, comes to the fore to fill its space, to front it; and even as it does so it goes out of focus and blurs; the unsettled outlines behave like, but remain distinct from the smudgy backgrounds, and this blur itself outstares us as something other than the immediate presence of the ‘subject’. Now I think of another artist of the high Renaissance, of the uncanny and ever so slightly unfocussed figures of Dosso Dossi, sometimes conventional, sometimes hermetic, but ever withdrawing from view in the very substance of their presentness. With Haines, as with Dossi, there is a peculiar movement in which the image, even as it draws us to it and then stares us down, does so by staring down itself. 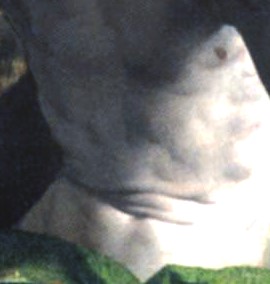 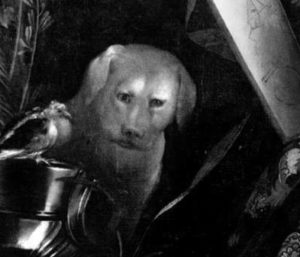 In Haines’ new work precision is lavished on the indistinct. In defeating our gaze, in despite of its promise of a fleeting sexual encounter, the commodity of flesh so freely offered, the image does so through self-defeat, through the startling contradiction of seeing within the image its own precisely controlled desire for invisibility. And they, the whoever within, fragile enough, ripped from the half infinity of the electronic, at what now might they be looking?

David Haines forthcoming exhibition will be opening in Amsterdam on March 28 2020 at Upstream Gallery. Info here:

All images copyright and courtesy of David Haines

All images are made by Ger-Jan van Rooij

David Haines is a British/Dutch artist based in Amsterdam. He studied at Camberwell School of Art, London and The Rijksakademie, Amsterdam. He works with a range of media, predominantly drawing, painting and video. Publications in which his work is featured include Vitamin D2, published by Phaidon; Drawing People by Roger Malbert, published by Thames and Hudson; and Interdisciplinary Encounters - Hidden and Visible Explorations of the work of Adrian Rifkin, published by I.B.Tauris. Recent group exhibitions include ‘A Slice Through the World’ at Modern Art Oxford and Drawing Room London and ‘Trouble in Paradise’ at the Kunsthal, Rotterdam. He has had solo exhibitions at Upstream Gallery, Amsterdam, Luisa Strina Gallery, Saõ Paulo, Art Basel Hong Kong (with Upstream Gallery) and The Armory Show NY. He has shown in group exhibitions at the Stedelijk Museum Amsterdam, Turner Contemporary Margate UK, Fruitmarket Gallery Edinburgh, De Appel Amsterdam, MIMA Middlesborough UK, The Eye- Film Museum Amsterdam, The Bluecoat Liverpool and the New Art Space, Amsterdam. In 2011 he exhibited as part of the 12th Istanbul Biennial. He was awarded the Irinox Disengi /Drawing Prize at Artissima Turin in 2017 and the Jeanne Oosting Prize in The Hague, N.L. in 2012. View all posts with David Haines →