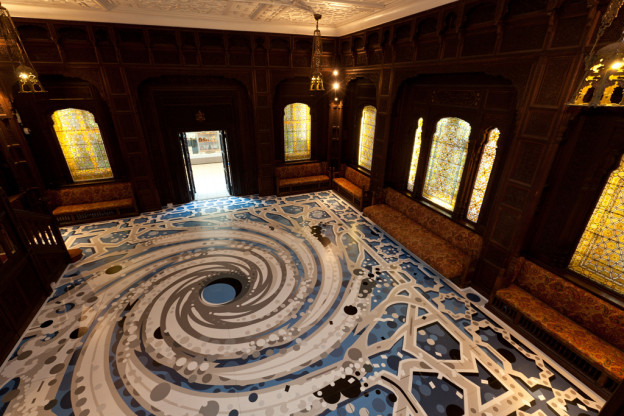 Can you tell us something about your background?

Tod Hanson: I grew up in north London, in a small 4 storey late Georgian terraced house. During the 2nd world war a bomb had fallen behind the house and had left the building shaken and in poor repair.  This ruinous state made it affordable to my parents in 1965.

My parents were mostly involved with the theatre, my mother with costume and box office admin and my father in set design and construction. He also had a nearby carpentry workshop where he designed and fabricated fitted furniture for private homes.

When my father could snatch the time, and with limited funds, he would work on the house.  He fitted rooms with furniture, and even clad one room entirely in classic 1970s pine, so it resembled a kind of caravan interior.

The hall was decked in florid orange and mustard psychedelic wallpaper.  All his work on the house was like scenery: at the back of a modern cupboard remained the cracked and crumbling house. The changes were cosmetic. The house became a strange amalgam of rustic and space age, concealing decaying archaeology. 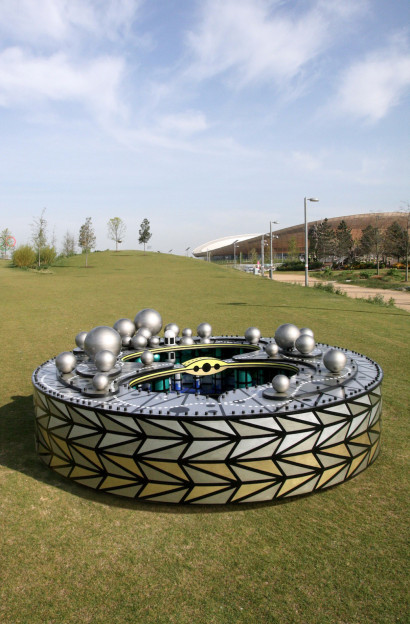 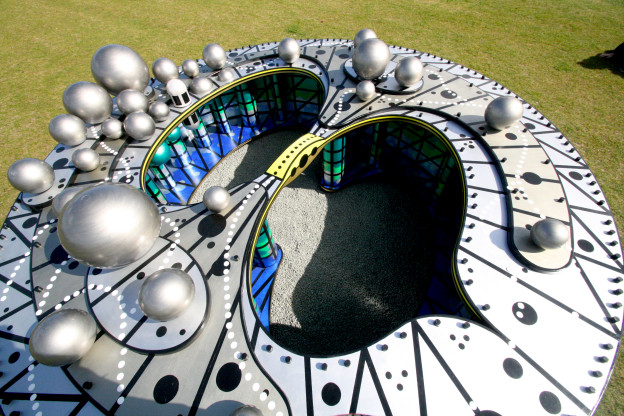 Can you say something about the motifs in your work?

TH: My vocabulary of motifs has become more limited over time.

I use dots for their ambiguous scale and meaning, suggestive of atoms, cells or worlds, spheres, holes, light bulbs and as rivets with which I can sew artworks together into iron clad juggernauts. Repetitive dots are hypnotic, and leave traces on the retina.

I use tracks, or stripes and lines, as conveyor belts or transport and information infrastructure, or perhaps biological systems. The tracks suggest motion: they can be go-faster stripes or whizz-lines lifted from comics. I also like to layer dots and bands into landscape or strata.

Dots and tracks coalesce into mechanisms. 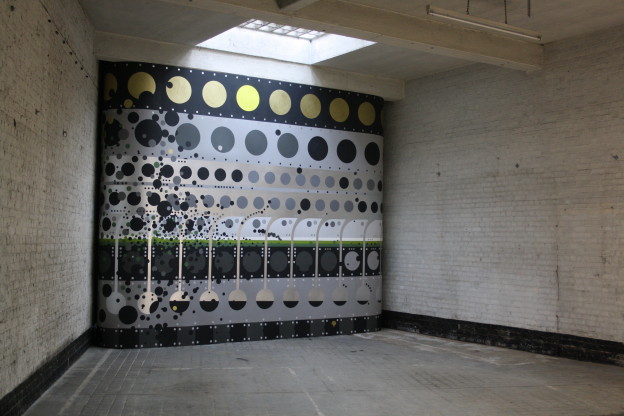 Sometimes I include streamers to give a piece direction. They fly across or drape from the artwork indicating an external force, a wind or blast. They add motion to the artwork itself.

They capture the strange spectacle of the ticker tape parade, the powerful visual of ejected bureaucracy in disarray: celebration but not without destruction and collapse. My streamers are spring blossom or the launch of the Titanic. As swags they introduce the language of a Classical temple or palace. 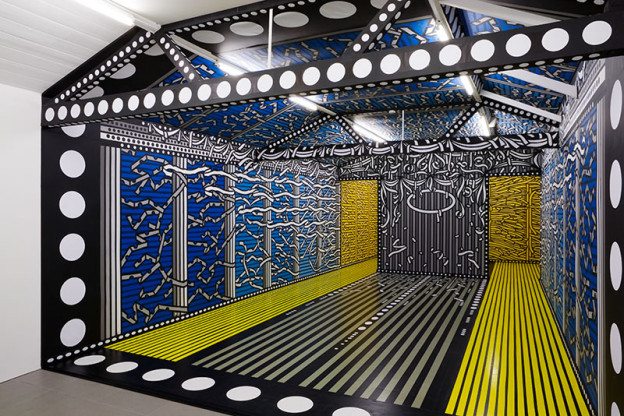 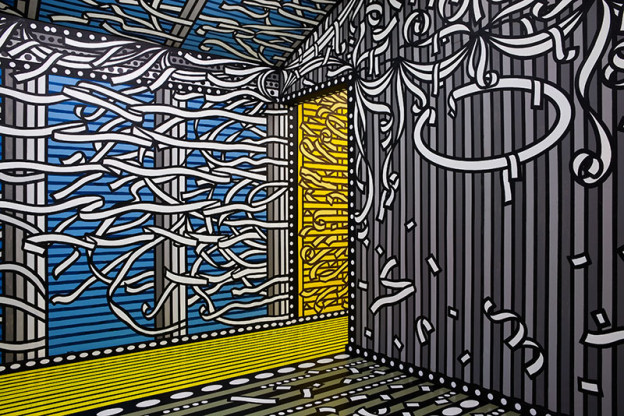 TH: I feel very aware of pattern in the world and can derive much pleasure from it. Architecture perhaps presents the most graphic and physical example of pattern, being born of standardised components and economy.  But pattern is everywhere if one looks for it.

I squint at the world to extract repeat elements – such as a colour or shape – and then detach them from their background.

In my Balham mural piece which ornamented a building’s flank wall, I looked at the way white architectural elements are used in architecture: keystones, window frames and string courses. I pulled them together to create a tracery and rhythm.

I’m also interested in reworking historic pattern. These could be gothic or classical forms or details, which I simplify and then amplify into fairground pop. 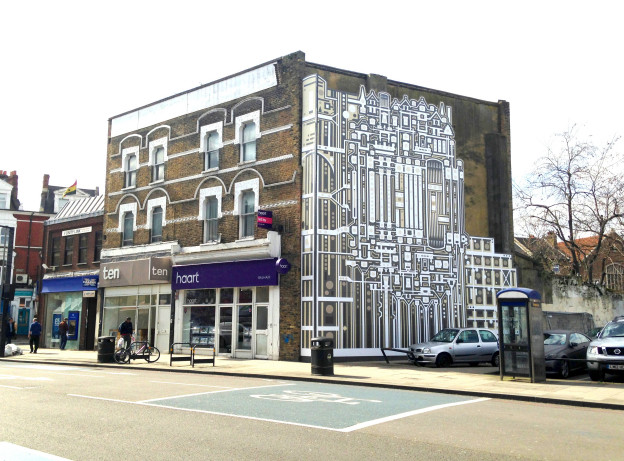 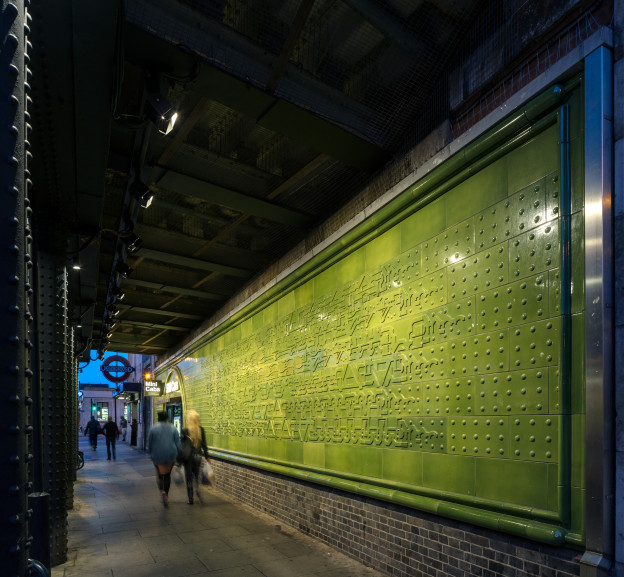 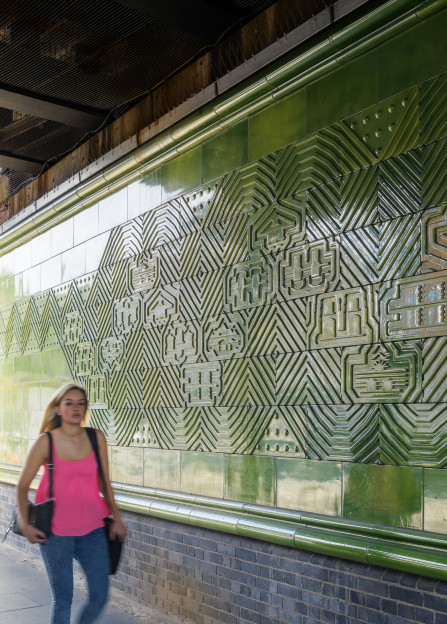 How important is scale in your work in influencing both conceptual interpretation and overall experience?

All images copyright and courtesy of Tod Hanson

Tod Hanson has been making large-scale public realm artworks since 1995. Working in both two and three dimensions, he employs a symbolic painted language of dots, tracks and streamers. Distinctive and recognisable, his work owes a lot to graphic design and the notion of the decorative but transcends these descriptions, always taking charge of a space, dynamically animating run-of-the-mill architecture or interior design. www.todhanson.com View all posts with Tod Hanson →