One day – a day now many decades in the past – a fire brigade in the American Midwest is called to a fire. The firefighters enter the kitchen where the fire is and pour water on the flames, but it seems as strong as ever. They repeat the exercise, again, to little effect. Then the lieutenant in charge of the crew begins to get a funny feeling — what he will describe later, to an interviewer, as his ESP. Based on this feeling, and this feeling alone, he pulls his men out of the building. As soon as they are out, the floor collapses. The fire had been fed from the basement below.

First told by Gary Klein in his 1998 book Sources of Power, the fire lieutenant’s sixth sense has been celebrated in academic journals and popular books ever since. Firefighters are people who run towards, not away, from fires, but the lieutenant’s instinct told him to run. Fire, by its very nature, is idiosyncratic and variable, which means that a lieutenant who only fought fires that followed a prescribed and predictable course would be of little use.

In the middle of this chaotic scene, it was the lieutenant’s experience, not deductive reason, that allowed him to see how this fire was something else altogether. In retrospect, we can understand the clues that were there to be found: the kitchen was hot, too hot for the size of fire they could see; the room was quiet, too quiet for the amount of heat they could feel. That the unquenchable flames came from a muffled source below now seems a matter of reason, not magic.

This deductive work, slow and careful, can take place in retrospect. It was pattern recognition, the sense that what was happening around him did not quite fit, that saved the lieutenant’s crew. The fire’s dark pattern told him to run.

To a cognitive scientist, we are all firefighters. A lawyer reading a contract will throw up her hands well before he can articulate exactly how the client will lose his suit. A teacher tingles when the bubbling noise of the classroom shifts from un-tutorable anarchy to a restlessness to learn. A biochemist looking at the printout from an experiment knows her machine is failing before the fault light comes on.

To be good at your job, in other words, means to have a feel for the relevant patterns. In his book Bounce, journalist Matthew Syed describes how tennis players receiving a serve watch the angles of opponent’s torso for clues to where the ball will go – an argument, perhaps, for returning to the Ancient Greek practice of competing naked. He reports on studies of hospital nurses in neonatal wards that find them able to spot infections before the canonical symptoms appear. Even things as subtle as shifts in personality that, with enough experience, trigger in the nurse a sense of a peaky child, of something not quite right.

Once you see a pattern, you may be able to describe it and make it a matter of reasons and rules, codify it, teach it. The “McMansions” thrown up by suddenly-wealthy clients in the suburbs are full of architectural dark patterns, and the charm of a website such as “McMansion Hell” is that it gives us the reasons and rules behind why we find these houses so offensive.

More seriously, the architect Christopher Alexander sought to enumerate the “pattern language” of buildings in a series of books in the 1970s. More than lists of rules, they are stories in which patterns play a starring role. Stories, for example, about how the cloister around a courtyard provides a moment of transition from inside to out, turning the open space from a threat to an invitation. And counterstories about how, in the absence of a pattern such as this, other patterns take over: the courtyard decays, empties out, feels dead – a familiar sight on an American college campus that, in expanding too quickly, has miscopied or misremembered the pattern from an half-remembered model.

Alexander was unusual in his rich use of story and detail. That’s because architecture is an elite profession, and because the more elite the profession, the more abstract the patterns and the language used to describe them. It’s a false syllogism – the patterns of a building fire are certainly no less complex than those in a lawsuit – but the fallacy persists. Under the grip of a half-remembered philosophy, we sometimes feel that the details, the substance, of an experience are too particular, too dirty, too mundane, to be meaningful.

We try, for example, to refine the complexity and dirt of war into the game of Chess. To the ambitious parents wanting to advance their child’s career, Chess appears to be more than just a game: in its distance from the actual facts of war, it appears as an ur-game, a game not of strategies, but of Strategy itself. Next to chess, the roleplaying and storytelling of a Dungeons and Dragons adventure seems like a feeble distraction. The more abstract and general the activity appears, the more powerful its methods must be.

Yet the facts do not bear this intuition out. Consider the two boards below. Both have the same number of pieces. To a novice player, the two are equally difficult to describe or remember: on average, after being shown either board for a few seconds, he can correctly place just a few pieces. The same, it turns out, is true for a master player when faced with the board on the left – but not, it turns out, with the board on the right. Given the board on the right, a master player can replicate it exactly. (When I presented a Chess-minded colleague of mine with the second board, he remembered it not only the next day, but the next week, and expects to remember it when I returned to London the following year.) 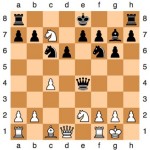 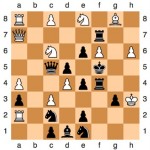 The difference that gives my colleague the advantage is simple: the configuration of the board on the left could never have arisen in ordinary play. The board on the right, by contrast, fits many of the standard patterns of arrangement and conflict that an advanced player is likely to have encountered before (this board comes in particular from a very unusual game, known as Garry Kasparov vs. the World, which is a story for another time).

What these results – and others like it – tell us is how the specific nature of our experiences persist even when we struggle to rid our practice of what we think of as the mundane and specific. Chess players live in a world no more abstract than that of firefighters: they watch, and learn, the patterns to hand.

And yet despite evidence like this, the dream of universal patterns persists. If Chess is too rooted in its patterns and rules of play, we say, let us go beyond it!

This article here is based on a talk at the Barbican’s Science on the Screen, organized by the London Mathematical Laboratory.

Simon DeDeo is an Assistant Professor at Carnegie Mellon University in the Department of Social and Decision Sciences, and External Professor at the Santa Fe Institute. He is also affiliated with the Cognitive Science program at Indiana University, where he runs the Laboratory for Social Minds. For three years, from 2010 to 2013, he was an Omidyar Fellow at the Santa Fe Institute. Simon holds an A.B. in astrophysics from Harvard, a Master’s in applied mathematics and theoretical physics from Cambridge University, and a Ph.D. in astrophysics from Princeton University. He has held post-doctoral fellowships at the Institute for Physics and Mathematics of the Universe at the University of Tokyo and at the Kavli Institute for Cosmological Physics at the University of Chicago. View all posts with Simon DeDeo →