‘Decoration is suited to simple races, peasants and savages’

The deepest taboos are so entrenched, so completely embedded in a given set of conventional values, that they are virtually invisible; they are simply seen as ‘the way things are’, and by implication ‘the way things always should be’. The unconscious acceptance of such basic rules endows them, of course, with great powers of persuasive truth – and this is not only the case with social practices, it also holds sway in the artistic sphere. Only when we step out of familiar categories, of social behavior or artistic practices, (by investigating other cultural values for instance), do we see that our accepted conventions are just one way of doing things.

Art in Western Europe, for instance, has long associated pattern (and other pronounced symmetries) with the Applied Arts, and deemed them inappropriate to Fine Art – in fact this is an important part of the distinction between the two. But whereas this artistic observance has been in place in the West since the Renaissance, it is not evident in the aesthetic values of other cultures, where Fine artistic productions in any field are just as likely to also be Applied (in the Western sense). One thinks of the sheer exquisite beauty of Chinese ceramics, of the overpowering aesthetic charge of Islamic Mosque interiors, of the mysterious intricacies of Tibetan decorative art, etc. etc. – one could go on indefinitely. Fortunately there are collections of non-Western art-forms in most major cities which, together with an abundance of Art publications, have given us some measure of the extraordinary artistic achievements of other cultures. 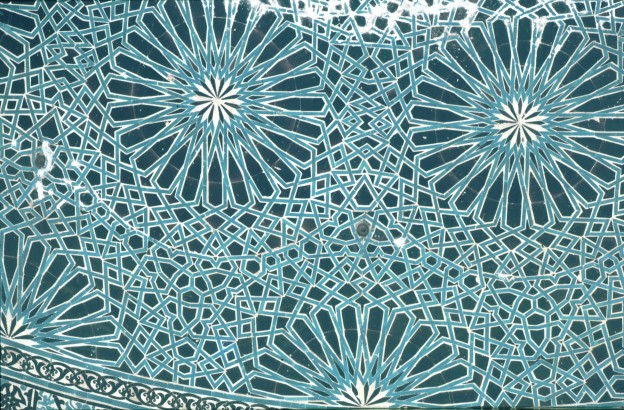 1b: Interior of dome of Karatay Mosque, Konya, Turkey [Images 1a, 1b and 1c] : Outside the western aesthetic tradition, technical and aesthetic virtuosity in art does not necessarily preclude symmetrical and pattern forms.

In Western Art however, the separation of roles between the Applied and the Fine seems still to have a resonance. The notion of the individual artist creating ‘High’ Art (which has no other purpose than providing an aesthetic experience), and the craftsperson producing ‘applied’ forms is surprisingly persistent – together with the notion that the latter is somehow intellectually inferior, and that mere decoration can never aspire to the aesthetic heights of the former. And surprisingly, this division has persisted despite the many profound changes that have affected Fine Art during the last century or so. Moreover, for historical reasons to do with the West’s cultural hegemony, it is a concept that has now been exported internationally. Art is Art, applied art and design are …. well, not quite in the same category.

These prejudices run deep. It means that however inspired or skilled a given creative work, if it contains obvious symmetries or patterns it risks tumbling into that lesser category of mere decoration – a perception which, in the light of the many radical changes that Art has undergone in the past century or so, is beginning to look patently absurd.

On the face of it one might think that, art-wise, all the old rules have been broken. The demolition of the western European artistic traditions has, after all, been underway for quite some time. As a result of the challenge of photography, Fine Art ceased to be tied to figural representation by the beginning of the 20th century – hastened by the introduction of the Kodak Brownie camera in 1900, a device that enabled a likeness to be captured by the mere the click of a button. From shortly after this date, a succession of Art movements, in a long series of ‘isms’, went on to change the focus and intentions of the visual arts in a seemingly permanent Modernist revolution (right up to the advent of Minimalism and Conceptualism, which have questioned the very validity of big ‘A’ Art itself). But dramatic though all of these changes have been to the ‘Fine’ Arts, they seem to have left one area of taboo squarely in place, namely, the afore-mentioned use of strong symmetries and patterns.* 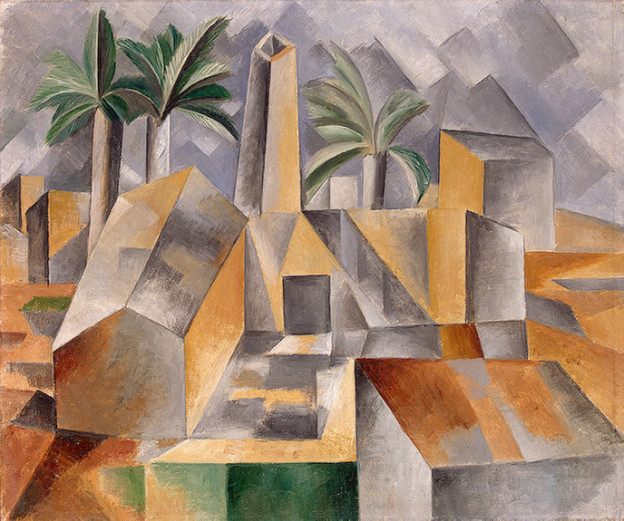 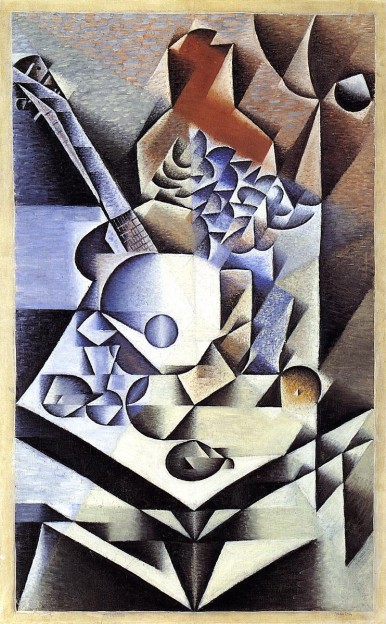 [Images 2a, 2b and 2c]: From the very beginning the revolutionary art movements of the 20th century, even while abandoning ‘realistic’ depictions and adopting geometrical and abstract forms, were characterized by a studious avoidance of the regularities of symmetry and pattern.

Up to this moment, in the second decade of the 21st century, the taboo on pattern/symmetry in the Fine Arts seems to be holding. As an aside, it is curious that some of the more outlandish excesses of recent times manage to pass as High Art – such as presenting tins of the artists own excrement, or an ordinary basketball suspended in a saline solution – but that the regularities of pattern should still put a creative work so completely beyond consideration for this category. The descent into ever greater obscuration and extravagant gimmickry in the Art field has, of course, been compounded by the distorting involvement of high-finance. As a result, High Art has become thoroughly commoditised and brokered by self-serving ordinands. In an uncertain financial period the demand for objects that might appear to have an enduring value are attractive. But tastes do change, and it seems very likely that the colossal sums paid at the present time for works emanating from the more outlandish sectors of the art scene will be a matter of some bewilderment for future generations.

* By ‘pattern’ I am referring here to the use of a motif repeated at regular intervals in more than one direction – arrangements that can be described in formal, geometrical terms (see Postscript below)