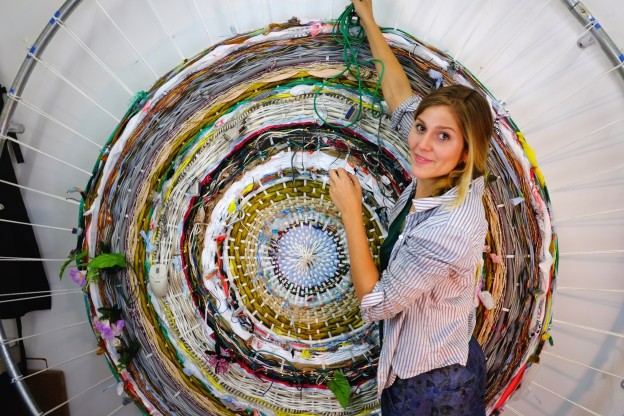 Can we begin by you saying something about your background?

Richelle Gribble: I grew up in a small town in the San Jacinto mountains of Southern California called Idyllwild with my mom and two sisters. My father lived along the coast in San Clemente so visiting him at the beach and driving home to snow was a typical winter day. Exploring the wildlife in the high desert of Idyllwild to snorkeling the waters throughout Orange County was my unbelievable routine. Whether hiking, learning to surf, sailing, or dunking under waves, I craved adventure and examined nature with an inquisitive and active mind. I was inspired by various ecosystems that colored California and compelled to create paintings, drawings, and small sculptures of landscapes, plants, and animals. My inherent impulse to make various trinkets and illustrations was a favorite pastime with friends and grew to become a shared interest between my dad and I. We would bring a set of watercolors and paper on every hike and beach visit. These shared moments of immense concentration, focus on detail, and creation of artworks was a bonding experience that intensified when my dad was diagnosed with renal kidney failure and had to undergo several open-heart surgeries. As his health declined, he continued to paint and I was able to join him as he worked.

I attended Idyllwild Arts Academy, a boarding arts high school, for visual arts. Exposed to new media such as analogue photography, acrylic/oil painting, graphic design, ceramics, and mixed media drawing, I was thrilled to learn new ways of making things. Midway through high school, my father passed away from a heart attack. This experience turned my world upside-down and drastically altered my perspective on life. I began making art exposing memories and emotions about my dad and quickly understood the deeper value of art to communicate ideas and connect with others. I inherited all of my dad’s art supplies which I still use to create artworks today. Art became a vehicle to challenge myself and motivate me to create and live adventurously. Perhaps my approach to art was motivated by resilience – loss inspired meaning, creation influenced thought, and ideas guided me to learn relentlessly. Art became a method for learning about myself, my surroundings, and most of all, the connecting threads that unify all of us.  These realizations carried me through college at the University of Southern California and continue to motivate me as I pursue a career in art and social impact.

“When seeing the Earth – and the networks that connect it– it becomes clearer how an individual can affect it.

Overview implies that by viewing our interconnectivity, we become more aware of our impact on each other and our environment.”

You work involves the inter-connectivity of networks, ranging from the molecular to macro-social systems. Have you found similarities between these different networks? And also differences?

RG: To begin, I must first explain what a network is and why it has become a key concept in my art. A network is defined in two ways; first, it is an arrangement of intersecting lines; second, it is a group or system of interconnected people or things. Each network contains a node (a point at which lines intersect or branch) and links (the pathways between two things or situations), resulting in an array of hubs and connectors. As social media, globalization, modern technology, and growing mobility enable us to transcend national and cultural boundaries, thinking in terms of networks was inevitable. Simultaneously, I began to value the core concept of the network itself — it connects systems in systems, building a more unified planet.

As I explore the interconnectivity of networks, striking structural, functional, and conceptual properties begin to emerge.  I was initially attracted to networks because of their intricate aesthetic, repeating patterns across various disciplines, and many interpretations of the word “network” used to describe social, biological, and technological concepts. I began to collect and illustrate hundreds of networks and categorized them by their common patterns. Later on, I learned that I was undergoing the study of “network topology” which recognizes eight basic structures of networks: point-to-point, bus, star, circular, mesh, tree, hybrid and daisy train. I was particularly fascinated by the network topology of the mesh, tree, and fully connected networks because they continued to reoccur in both the digital and physical space. 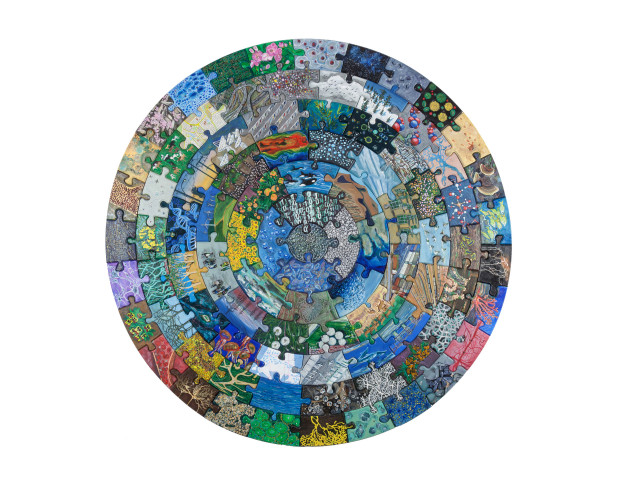 “ONE is a large-scale puzzle featuring 91 small paintings of organisms, social systems, and ecosystems that make up our planet. When assembled together, this puzzle suggests that each system is connected to everything else and all parts make up a single, unified whole – our complex Earth.”

My favorite network to illustrate is the mesh network or a fully connected network. This network also goes by the informal name of the “six degrees of separation,” a theory that everyone and everything is six or fewer steps away, by way of introduction, from one another. This dense network structure implies that there is a short path of connections that link people or objects within vast groups, much like a chain of “a friend of a friend” relationships. The visual appearance of the mesh network contains intricate clustering and connectivity which I imitate in my artwork. Examples of this type of partially or fully connected networks are evident in data visualizations of the Internet, diagrams of my Facebook friends, large crowds of people, global maps and our expansive Web of Life. 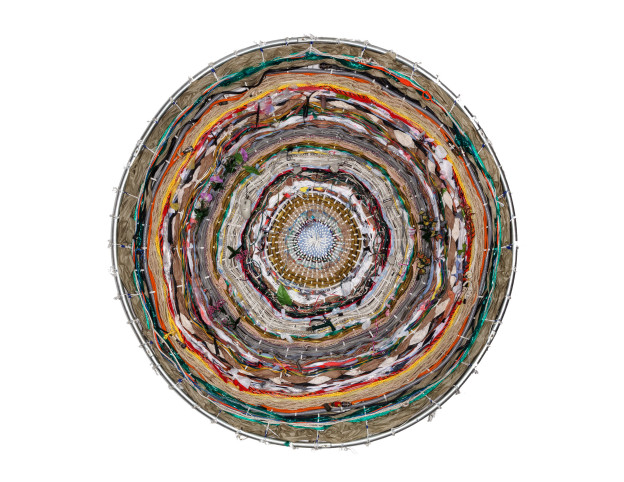 “Web of Life is a large-scale textile sculpture consisting of recycled, found, and donated materials that are used regularly in everyday life. Selected materials relate to matter that ‘connects us’ in a physical and metaphorical way to our surrounding, our resources, and to each other.”

Another reoccurring pattern in my artwork is the tree network. A tree structure typically reveals a more hierarchical form where all nodes and links branch from one starting node, or “root node.” These types of networks are apparent in family tree diagrams, river deltas, Purkinje neurons, red coral and root systems. These types of networks seem to appear everywhere, on the antlers of a deer to the crack on a sidewalk. This type of network contains fractal patterns, my favorite! 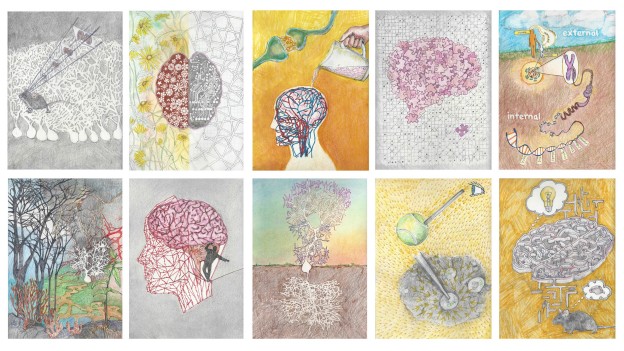 “These illustrations are part of an ongoing collaboration with neurobiologist Dana Simmons facilitated by the SciArt Center of New York. Dana shared imagery of neural networks, her lab, and purkinje cell as well as text responses to various questions related to her research. Some questions include: Why do scientists use mice to study diseases? What are other examples of the Purkinje pattern in nature? And am I right-brained or left-brained? Each drawing pairs with a posed question and response, culminating in a published science-art book.”

By creating artwork about networks, I became more aware of systems and designs that shape our lives. As I began learning about networks by visually comparing them, I noticed how they can be classified into different categories based on the “network topology.” However, what I find to be most exciting about networks is that they all connect in some way. I do not research networks to acknowledge their differences, but rather find them most compelling in how they are interrelated. I hope that people can begin to recognize how these networks are bound to one another, revealing that we are all connected, for better or for worse, so we need to act for the greater good to maintain the health of our planet. 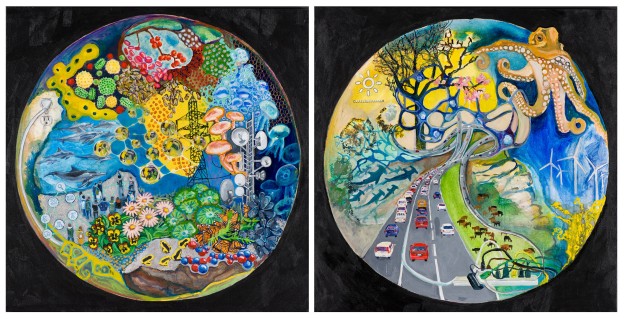 “The Earth is bound by networks, functioning a single living organism. This series ties together various networks into one form, one body.”

All images courtesy and copyright of Richelle Gribble

Dana Simmons and Richelle Gribble: “The Trees Inside Our Brain,” an illustrated guide to the brain and autism research

Richelle Gribble creates mixed media paintings and drawings, collages, prints, videos, puzzles and sculptures. Her artwork is inspired by concepts of virality, biology, networks, group dynamics, and social trends that connect us all. She earned a BFA in Studio Arts from the Roski School of Art and Design with dual minors in Social Entrepreneurship and Marketing at the University of Southern California, in 2013. Winner of 2016 Grand Prize Award for solo exhibition at Jonathan Ferrara Gallery with inclusion in Art Market San Francisco, Texas Contemporary, and Miami Project. Works exhibited on LED screen in Times Square; Christie's Salesroom Rockefeller Center; Fisher Museum of Fine Arts; John Wayne Airport; Awagami Factory; and more. Her artwork is etched onto four Dove satellites in the first-ever orbiting art show in outer space facilitated by Planet Labs. Work presented in a TEDxTrousdale talk "What is our Role within a Networked Society?" View all posts with Richelle Gribble →