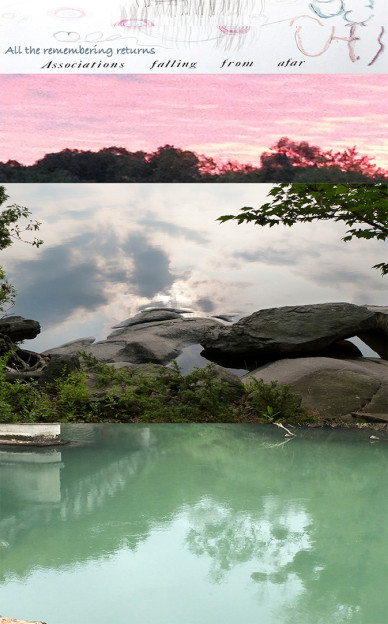 Patricia Moss-Vreeland: My mother was my first mentor, and inspired my passion, love and curiosity about art, from a very early age. This translated into a lifelong investigation having art as my main language. I think that art builds different kinds of languages and offers a whole array of creative possibilities to communicate and shape understanding from different perspectives.

My studio work is comprised of drawings, paintings, pigment prints and mixed media, sometimes intertwined with my poetry. I have been involved in many exhibitions and commissions internationally, with works in many permanent museum collections. After winning a national competition, I designed the Memorial Room for the Holocaust Museum in Houston, which earned four major awards. Then I received the Millennial Art-in-Science Commission, University City Science Center, Philadelphia, to create Memory-Connections Matter. That installation launched my exploration of the art and science of memory. This exhibition became the inspiration for my book, A Place for Memory:  Where Art and Science Meet, about the intersection of art and science through the lens of memory. I lead workshops and have created interactive public events across the country around the themes of memory, creativity, and metaphor. 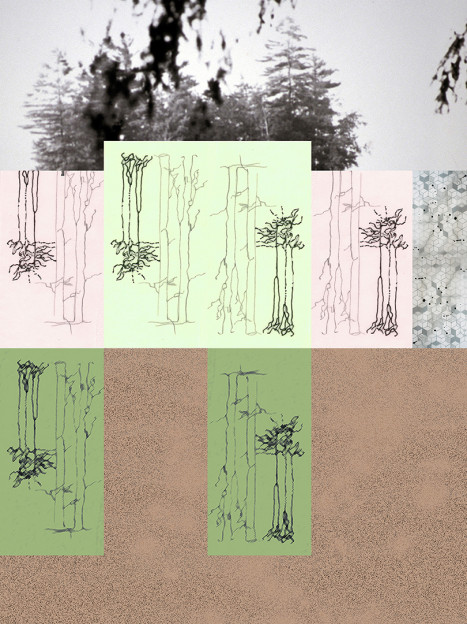 RB: Your work explores memory as “a meditation on who we are”.  What inspired this exploration and how does neuroscience connect with this?

PM-V: When we examine memory, there’s the potential to understand our own individual experience more fully, to see who we are – and at the same time find points of connections with others. Memory only holds truth for us in a context.

I had completed the commission to design the Memorial Room, Holocaust Museum Houston in 1996. Working on the subject of the Holocaust for three years revealed the historical importance of memory and the many reverberations of collective memory on a society.  I listened to memories from survivors and wondered, why did individuals remember and respond to the past and to life so differently? Each survivor contained a mountain of grief –some of them escalated to new heights, and others failed to make the climb.

The mystery of memory and the residual emotions of this stayed with me after the Holocaust Museum opened to the public, leaving a powerful imprint and altering my earlier ideas and artwork in my studio.

At the same time, I became aware that we were in the midst of a quiet revolution in the world of neuroscience. The nineties was tagged the “decade of the brain,” because of all of the discoveries about brain functioning. A major breakthrough in neuroscience was the recognition of the human’s brain’s plasticity. I was familiar with the word “plastic” from the arts, meaning something can be molded; and it was being used in neuroscience.

In 1998, soon after the Holocaust Memorial piece, a friend told me about an opportunity that held possibilities for me to learn more about memory and humanity from a different perspective, through neuroscience. I worked with a neuropsychologist for a year for the commission, Memory –Connections Matter and was surprised to discover that memory is a subjective process, placing it firmly in the arts domain. I learned that our memories are not fixed; each memory is a constantly shifting reconstruction of experience and emotion. How you feel when something occurs will become the context for how you remember that event.

I knew I had arrived at something important: the understanding that the memories we create are keys to who we are. 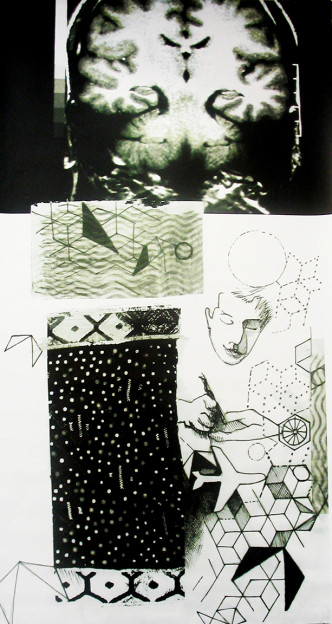 RB: Can you say something about your exhibition Memory –Connections Matter? What were its aims?

PM-V: Memory-Connections Matter was about the role that memory plays in our lives. The primary objective was to stimulate creative thinking about art and science in contemporary culture. Experiential in approach and design, I designed it to have visitors perceive the process of memory making, to learn how our brains construct a memory, and to actively process this information through art.  The installation was designed to illuminate the relationship between memory, creativity, brain function and learning, and the multiple paths to take through art. My title came about after I found out how critical making connections are to the formation of memory.

I wrote a poem first in response to learning about the science of memory, which at that time was unusual for me. When I brought it to show my advisor, who was expecting some visual sketches, she felt it was a perfect definition of memory. I decided to make this poem the gateway to my installation. It became an example of visual and verbal metaphor, as I developed it digitally into a large-scale print. This created an opportunity for me to stretch as an artist and braid image and text together for the first time.

In the installation, interconnecting pathways led the viewer to four interactive stations representing Neurobiology; Memory and Emotion; Memory and Place; Memory and our Senses. The choices you made as a visitor would affect your interaction and memory, and reveal how memory changes over time and direction, another planned metaphor in the design of my installation. I wanted visitors to walk away understanding that the way in which we remember something involves creativity. Memory is our creation, and it changes daily.

I had also designed Memory-Connections Matter to be a teaching site. I met with students, faculty and gallery visitors, and depending on the age group and discipline, I walked them through different scenarios, describing some of the visual and verbal metaphors woven throughout, and the possible interpretations about art and science, languages, memory and creativity. Many visitors left memories, as text, quotes, and sketches. I made a book of these daily responses to share, and included poems that I collected on memory. I also organized an educational forum, inviting diverse professionals to moderate discussions that reflected upon memory and creativity. 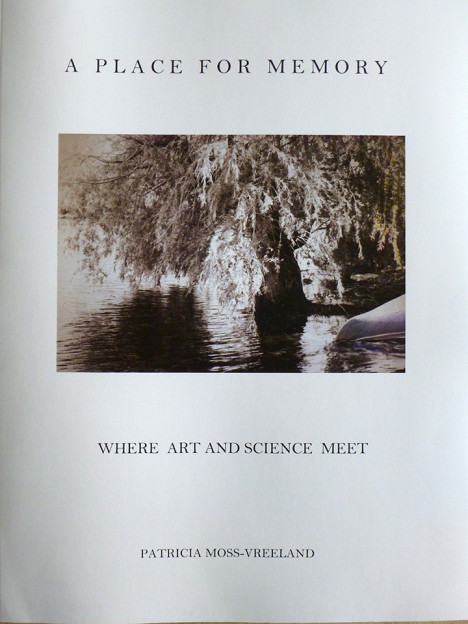 RB: You describe your book, A Place for Memory: Where Art and Science Meet, as both an art book and a book designed to underscore our human potential for creativity. What inspired you to write this book and what do you hope it will give to its readers?

PM-V: I was inspired to write and design A Place for Memory: Where Art and Science Meet, published in 2013, as I felt the core content of Memory-Connections Matter grew in relevance as time went by, and had the potential to speak to a broader audience.

When I translated my artwork into a book format, I wanted to forge a new partnership with the reader, taking each person on a visual journey, unravelling how creativity guides the ways in which we remember. Through an assemblage of images, poetic and lyrical text, my works of art and poetry in this book are metaphors for memory and how it functions. Each section relates to different aspects of making memory. My hope is for each reader to find a place for ongoing reflection, and to uncover his or her creativity through the lens of memory.

The book presents the art and science of memory as intertwined spaces. Rather than presenting one linear narrative, each page becomes a pathway, a thread for making another pattern of thought and experience. You can begin the book any place, and the concept is that each page turned triggers memory, can change perception, and invites new connections.

RB: In your view, what is the relationship between memory and the creative process?

Patricia Moss-Vreeland’s paintings, drawings and mixed-media works are exhibited nationally at institutions that include the Brooklyn Museum of Art, the Philadelphia Museum of Art, and the Institute of Contemporary Art. Her art resides in many permanent collections, including the Philadelphia Museum of Art, the Art Institute of Chicago and The Norton Museum. She exhibited her work at the Locks Gallery in Philadelphia for two decades. Later after winning a national competition, Moss-Vreeland designed the Memorial Room for the Holocaust Museum Houston. This permanent installation earned four awards, including the American Institute of Architects Honor award in Design, and the Spectrum International Award in Design. Moss-Vreeland went on to receive the Art-in-Science XIV Millennial commission for Memory-Connections Matter, at the Esther Klein Gallery, University City Science Center, Philadelphia, that incorporated her poetry and art, illuminating the relationship between memory, creativity and learning. A traveling exhibition, it went on to the University of St. Thomas, St. Paul as the central focus for the Fields of Mind Conference, for which she and her neuroscience advisor, Dr. Barbara Malamut, were the keynote speakers. This work led to her designing and writing her recent book, A Place for Memory: Where Art and Science Meet. The book combines images of Moss-Vreeland’s art, her poetry and lyrical text, created to inform and connect with each reader, exploring the connections between memory, creativity. brain function, and learning. Moss-Vreeland expanded her artistic practice to workshops, lectures, residencies and collaborative public participatory events. She has been a Presenter for the last two years at DesignPhiladelphia events, and has curated a Community Table in partnership with the Monell Chemical Senses Center, at the Painted Bride Art Center, Philadelphia, on her work with memory and our senses. She has been invited to present her work at the Pennsylvania Academy of Fine Arts and the University of the Arts, 2015-16. Her artwork was featured this past year in a New York exhibition Science Inspires Art: The Brain, at Walter O. Lecroy Gallery of the New York Hall of Science, Flushing Meadows, NY, October 10 - March 29, 2015; Works on Paper: Survey of Purchase Prizes 1978-2009 at Arcadia University, Glenside, PA, February 10- March 15, 2015, and PII Gallery, The Nature of Time and Place, guest curated thematic group exhibition, Philadelphia, May 2015. Patricia Moss-Vreeland is a TEDx speaker, May 17, 2015. Her work was part of a traveling Exhibition, In-Formed Artist, Atelier Aperto Venezia Viva Gallery, Venice, Italy, and Associazione Internazionale Incisori, Rome, Italy, spring, 2016. She was invited to have a solo exhibition and talk at Trinity College, CT, for their 25th Anniversary of Neuroscience; The Brain Event, April 2016. Moss-Vreeland returned from a grant funded artist residency at CAMAC, Centre d’art Marnay Art Centre, September 2015, with open studio tour and exhibition, and a fellowship supported residency in Italy in October 2015, where she is invited back in spring 2016. View all posts with Patricia Moss-Vreeland →