Thalia Gatzouli: I grew up in a medical environment with all the members of my family being physicians. This clearly influenced my first choice to study at the Medical School of the Aristotle University of Thessaloniki, Greece. Afterward, I took my internship in Nuclear Medicine and my Ph.D. in Neurosciences.  A few years later, while I was asking questions and was seeking more freedom in thought, I realized that there was a significant part of me that remained hidden. Given that I had a relatively good perception of the space, ability in composition and admiration for the Art I decided to study at the Fine Arts School of Aristotle University. 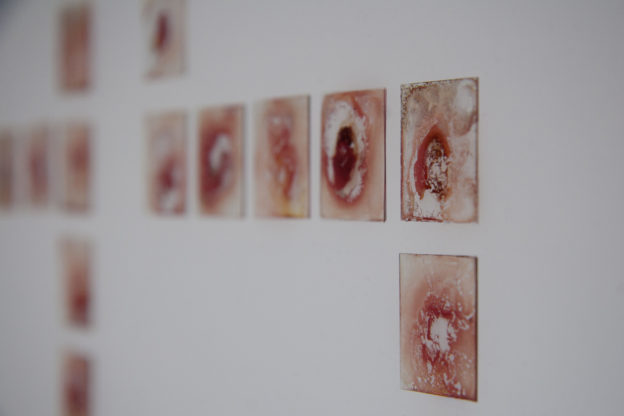 TG: My artistic narrative is influenced by my experience and involvement, over the years, in the scientific study and investigation of cell structure and function. My first image production was during the procedure of my Ph.D., where I was studying and taking pictures of tissues over the electron microscope.  From this pool of images that I have acquired began a meditation on the concept of matter and life. The physical and chemical properties of atoms and molecules, the composition of matter, the energy, matter’s wear and degradation — these are the raw materials I use to compose a personal artistic landscape.

Artists from the arte povera such as Mario Mertz, William Kentridge, whom I have heard in his many speeches worldwide, and the Greek artist Nicos Navridis have also influenced my work. 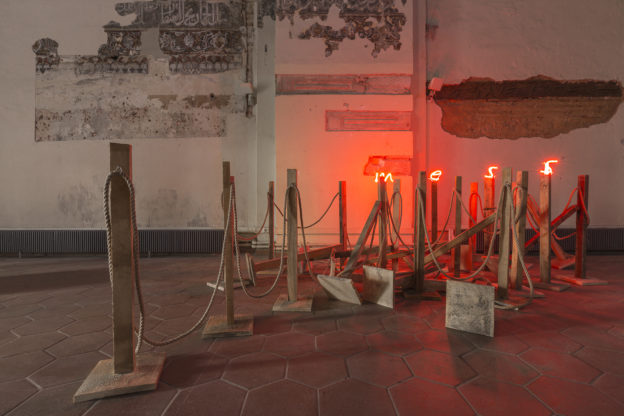 TG: My work is based on ideas and questions of contemporary life that concern me. Conceiving an idea is my starting point. From there, an artistic process based on drawing, involving stages of selection and rejection, is required for the project to take place. As for my practice, I like to explore different ways of the artistic process because this makes the creation more fascinating for me. Also many times I choose installations to communicate my ideas.

RB: Can you say something about your show The Inevitable Failure to Understand(2018)?

TG: My first solo exhibition titled The inevitable Failure to Understand is referred to the human inability to understand the whole.  It is a comment on the way we perceive and understand the world and time, ourselves and the others.

Our perception is based on our senses but also on the projection of all those that have so far been recorded in our brains as traces of experience and memory. It is constantly changing in the course of life, that is to say, of time, and therefore, it is continually incomplete. 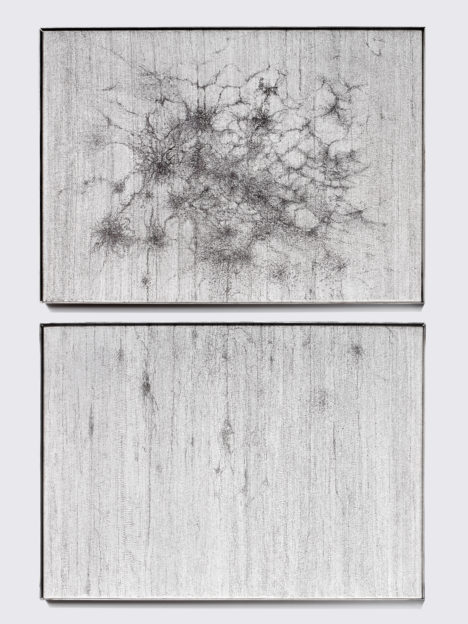 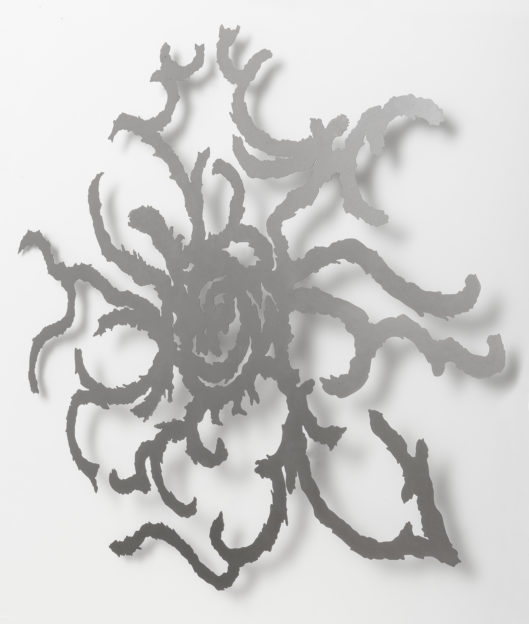 It is also a comment on how our molecular and cellular traces, composed of the same raw matter, the elements that exist in nature, are subject to constant dynamic change through our experiences, our thoughts, and feelings and while been redeployed now and again in new networks, create an individual inner reality, which ultimately makes every one of us unique but always incomplete, that is, human beings.

“There is no doubt that the hidden life of matter has been Gatzouli’s  theoretical background for an extended, essential, inner monologue, which evolves and ends up in a variety of artworks.  If medicine taught Gatzouli the ecumenical poetics of matter, her artistic dynamics, with obsessive curiosity in the hunt of the trace, led her to the creation of works that transferring us the ‘unspoken poetry’ of the world“, the curator T. Stefanidou, emphasizes.

RB: Your work From Left to Right (2016) was an installation using a metal structure, neon and sound. Can you say something more about this work and the relationship between the visual and the aural?

TG: The Bohr effect and the continuous conversion of Haemoglobin, which carries oxygen and carbon dioxide into and out of the body, become both reason and comment on the competitive harmony of opposites and the passage from one state to another — a perpetual motion within the body where time resides, its reverberation implying both the rhythm of becoming and the light invading the darkness. 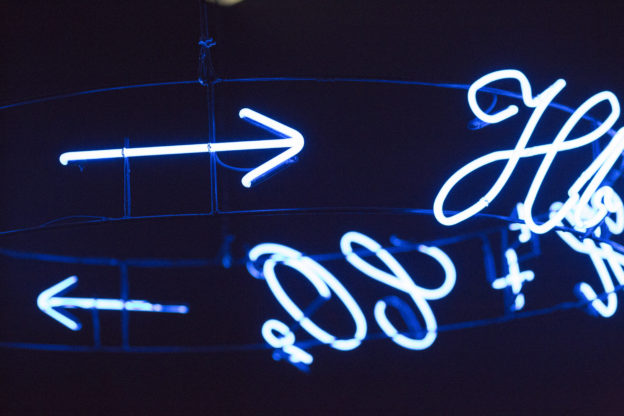 This work is accompanied by an aural installation of two sounds mixed together, one corresponding to the sound produced by the blood passing through the main arteries, where the frequency of beats is about sixty times per minute, and the other sound is that produced by a mechanical device, a watch, with its volume at the threshold of audibility.

RB: Your Drawings (2013-14) are developed using a combination of detailed graphism and automatic writing. Can you say more about this process of working?

TG: My drawings are developed using detailed graphism and automatic writing, through which I generate spontaneous images that search for harmony in the composition and resemble patches of an organic whole. Automatic writing and time guide the process which evolves into the footprints of a spiritual and mental exercise- through these corporality is transformed into freedom of thought.

TG: Art and science have common paths – observation, analysis, and synthesis. Art and Medicine, even more, one that both are anthropocentric. Moreover, on one hand, rational thinking where science is based and unconscious, the inexplicable, the inner impulse where Αrt rely on, on the other, both are traits of human existence. For me, as being at the same time artist and physician, these two worlds are complementary, not contradictory.

RB: Following on from the previous question, collaboration between the arts and sciences has the potential to create new knowledge, ideas and processes beneficial to both fields. Do you agree with this statement?

TG: The boundaries between rational and inexplicable are changing every day through the evolvement of technology and thus, nowadays, Science and Art need to be redefined themselves.

As previously said, I strongly believe that both they are tightly bonded in human existence and their collaboration is beneficial in both fields. 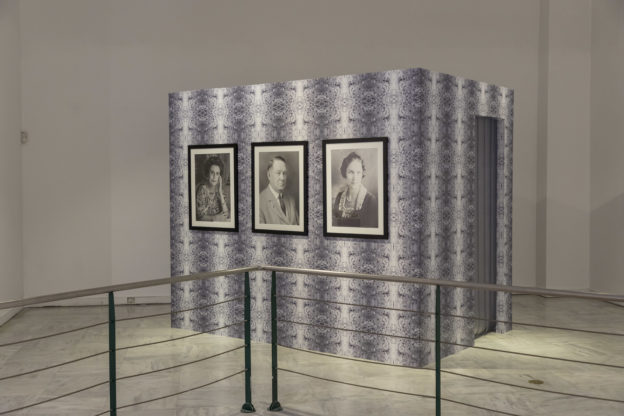 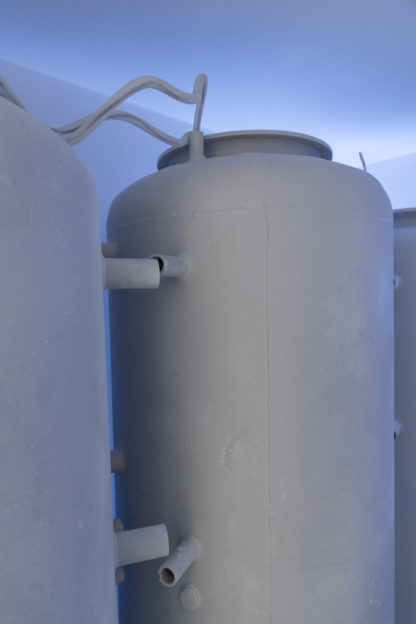 TG: My latest project, titled Pause-Undoing Time, was on show in the 7th Biennale of Thessaloniki which has just expired. This work focuses on the 21st-century medical myth (?) about the application of cryonics. Strong freezing, under strict technological control, keeps the body in a state of stagnation, awaiting its future return to life.  In our era, the new conditions created by revolutionary developments in biotechnology dramatically change the reality that concerned human life until now. The limits and restrictions of organic chemistry are overcome, opening up new paths, thanks to genetic engineering, regenerative medicine, and nanotechnology. This will lead to new potentials of delaying the decaying and aging of cells, thereby delaying death, and making the myths of Prometheus, Faust, and Frankenstein less imaginary. Technology and science already provide humans with the ability to intervene in time and keep the human body (all or part) in deep freezing, separated from time and society, in a standby state, in an intermediate space, decisively depended upon the functioning of inorganic materials, in the hope, it can rejoin life when  “judge” (who?) that the conditions are appropriates. The dipole life-death is differentiated (?), while the concept of life and time changes and the human becomes non-mortal through waiting.

“Gatzouli’s work turns our attention to the grey area of technological and medical innovations, where important moral, philosophical, but also cultural, social and economic issues are raised; where the precise distinction between the states of life and death and, between soul and body, become blurred. The artist’s approach highlights the importance of taking a critical stance towards major technological breakthroughs and makes the intersection between art and medicine important”, the curator T. Misirloglou states.

All images copyright and courtesy of Thalia Gatzouli