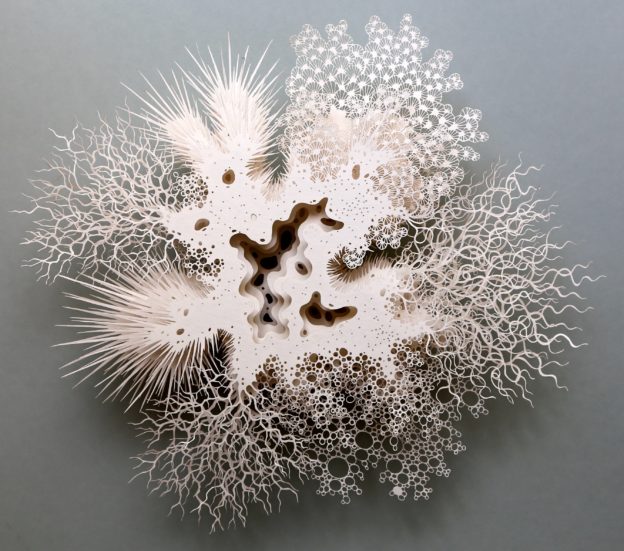 As an artist who takes nature as his principal subject it is inevitable that I am deeply inspired by science. Where once artists viewed nature in mystical, Romantic terms as the emanation of the divine creator’s will, today we approach it through the prism of science and through the host of imaging technologies derived from it: microscopes (optical, electron and scanning), telescopes (terrestrial and orbital), satellites, X rays, MRI’s etc…And thanks to the advent of the internet this vast database of imagery has been made available to a non-specialist audience for the first time.

But science doesn’t simply mediate our perception of nature, it dominates it and  has altered our understanding of the very texture of the world that surrounds us. The illusion of the solidity of the physical world, including that of our own bodies, has been punctured and atomised into a cloud of ever smaller structures: cells, proteins, molecules, atoms, protons, quarks and quantum energy fields. It is this new perception of the world that I explore in my work by attempting to find accessible visual metaphors that describe phenomena that are difficult to grasp because of their scale: infinitesimally small in size and unimaginably vast in number. 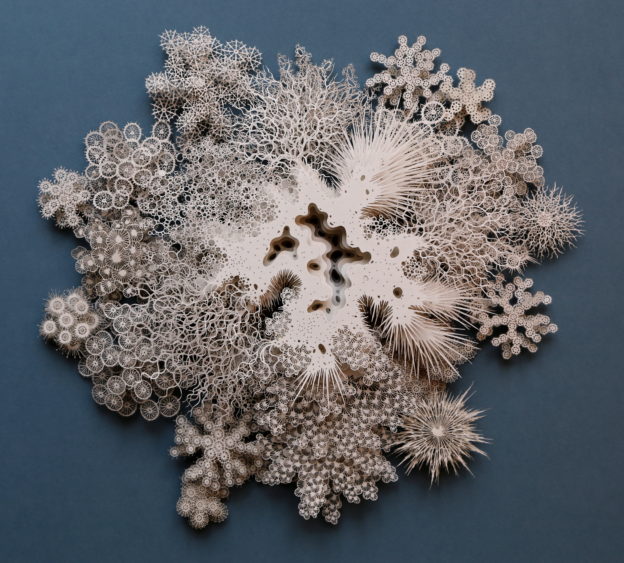 The series of sculptures entitled “Magic Circle Variations” emerged from a collaboration with scientists involved in the Human Microbiome project, mapping and identifying the vast colony of bacteria that live in and on our bodies and which help us survive. The aim was to create an artwork that shifted our perception of bacteria as dirty and threatening to something positive and beneficial. I used the metaphor of the coral reef to make a paper sculpture of diverse bacterial organisms coexisting in harmony. I wanted to convey the idea of a world of beauty and fragility that needs to be protected and maintained. (One of the sculptures from this series is on permanent display at the Wellcome Collection’s exhibition “Being Human” in London) 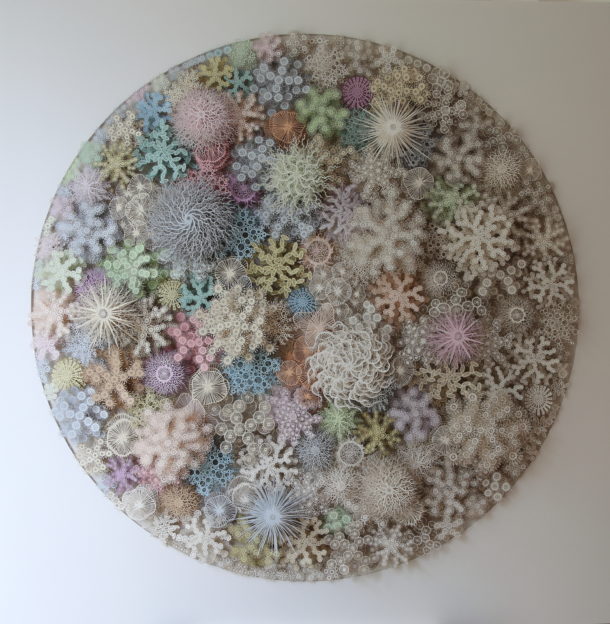 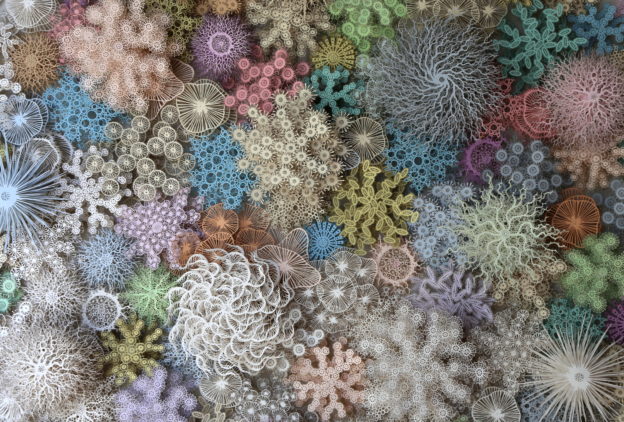 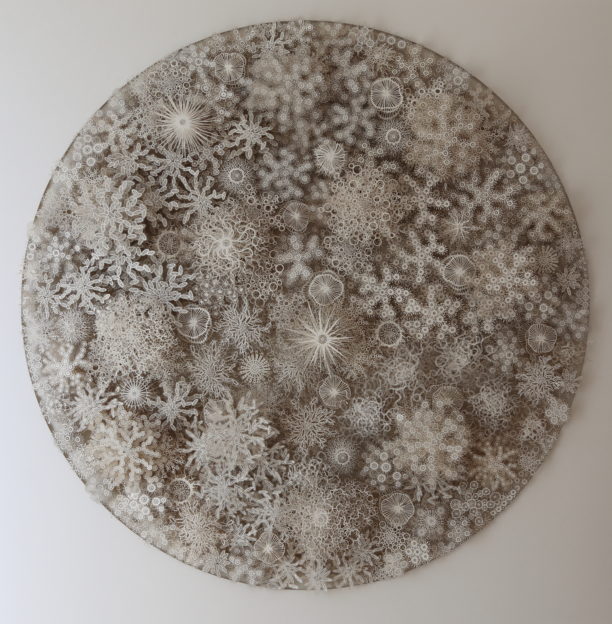 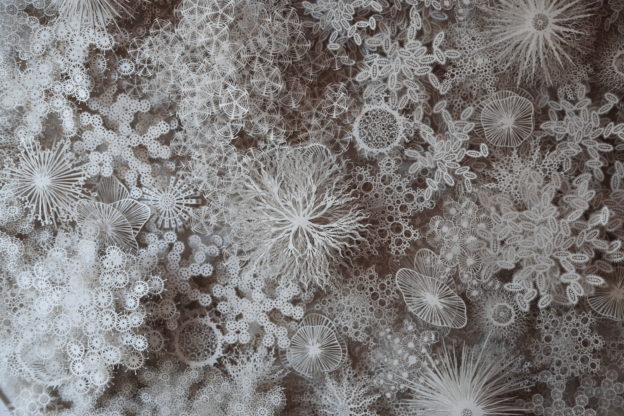 The second piece that emerged from this project was “Cut Microbe”, a sculpture of a single E.coli bacterium painstakingly hand cut over a period of five months. The scale of time needed to create this piece acts as a metaphor for the unimaginable scale of the bacterial world itself. 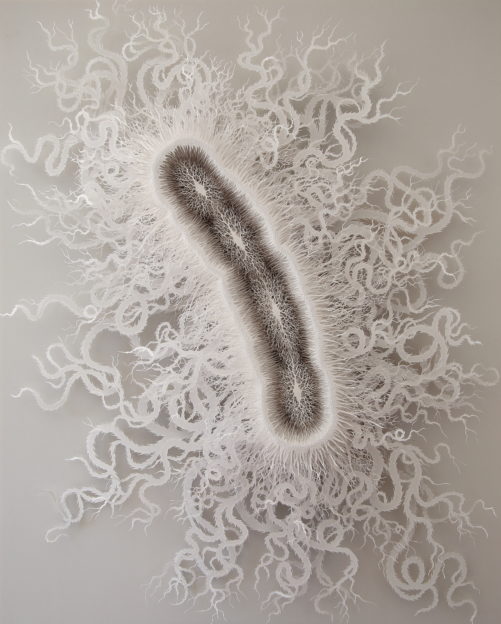 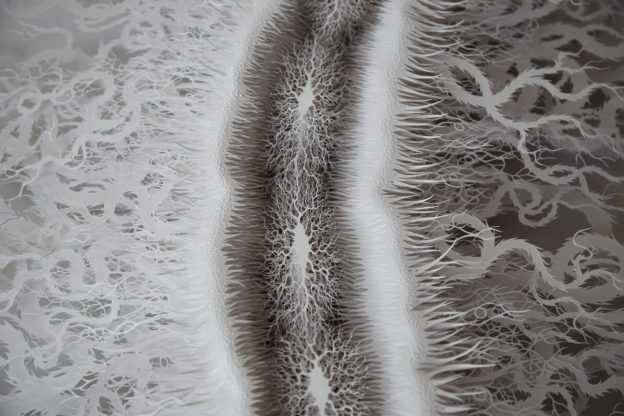 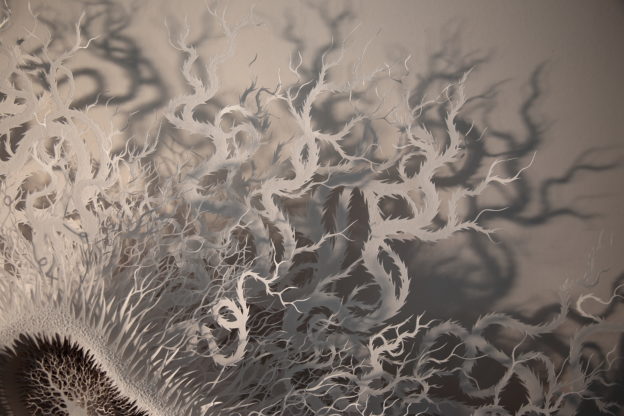 In the “Cytokinesis Variations” sculptures I revisit a process that we all learn about in high school biology but which most of us promptly forget, namely cell division. By re-presenting this  banal, quotidian biological process, the basis of all organic growth, I wanted to show how bizarre, surreal and astonishing this drama of self-replication really is. We have become so used to assimilating and normalizing the paradigm shifts in understanding that science presents us with that we are in danger of forgetting the strangeness and wonder of the world that it opens up to us. I think it’s the artist’s duty to remind us of that wonder. 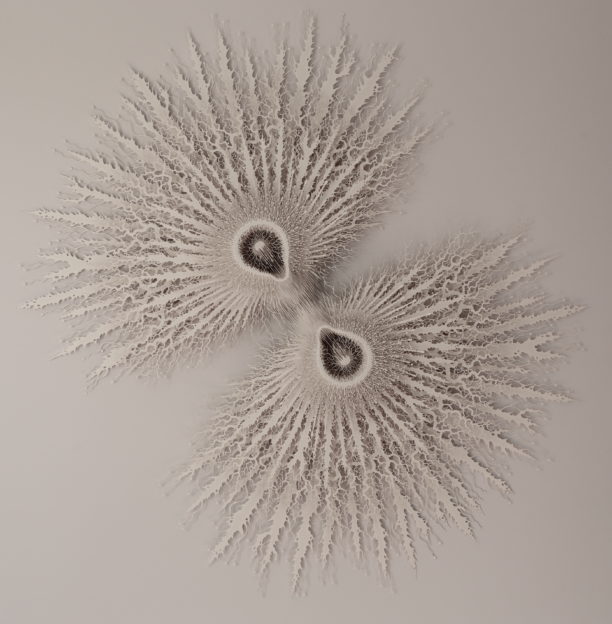 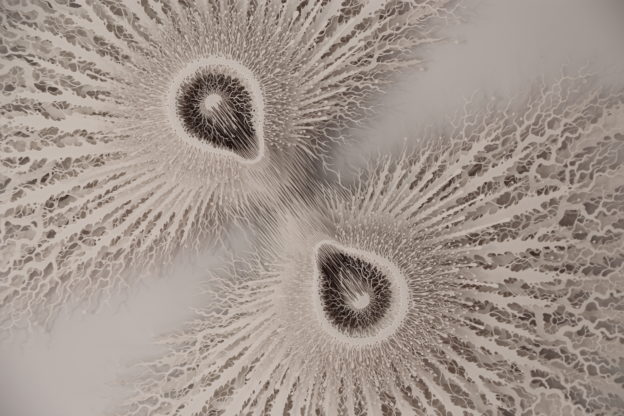 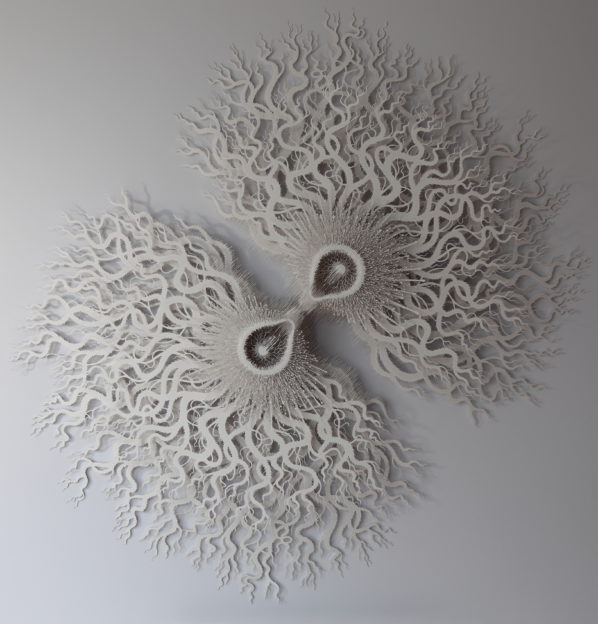 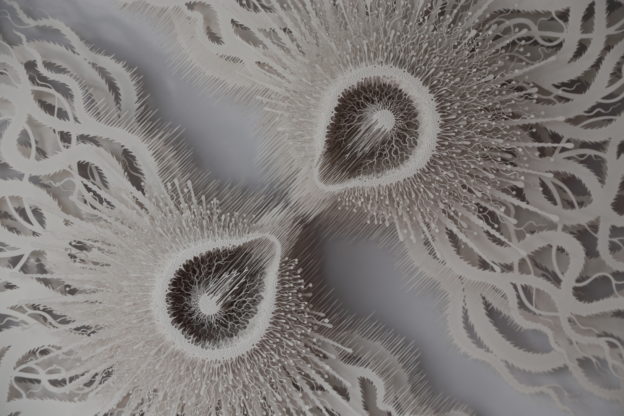 “Outbreak” and “Control X” share a common theme and one which is perhaps more pertinent today during the unfolding Covid 19 crisis than at any other time. I’m referring to the bipolar attitude we have to science, aptly summarised in a comment from scientist and science fiction writer Isaac Asimov: 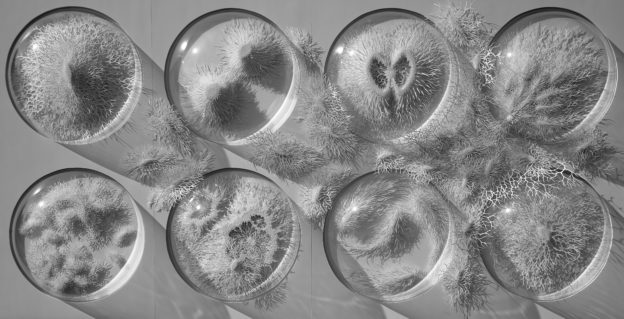 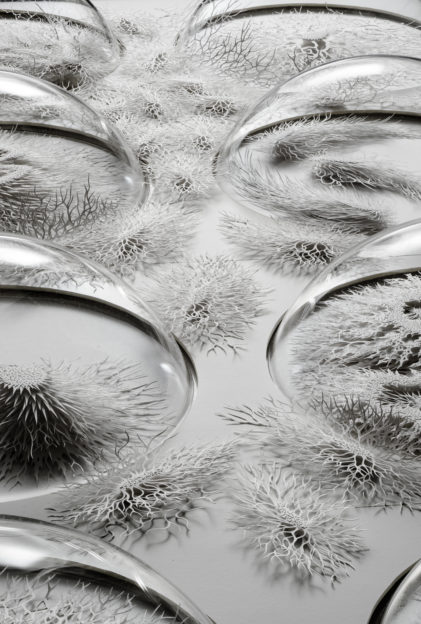 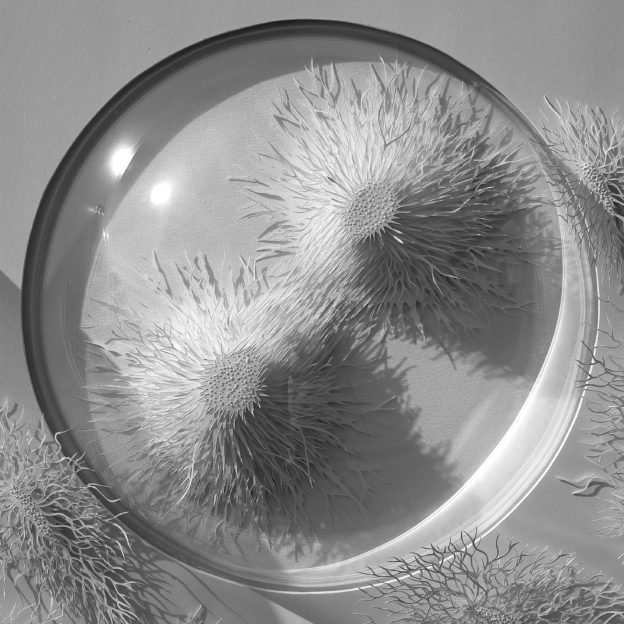 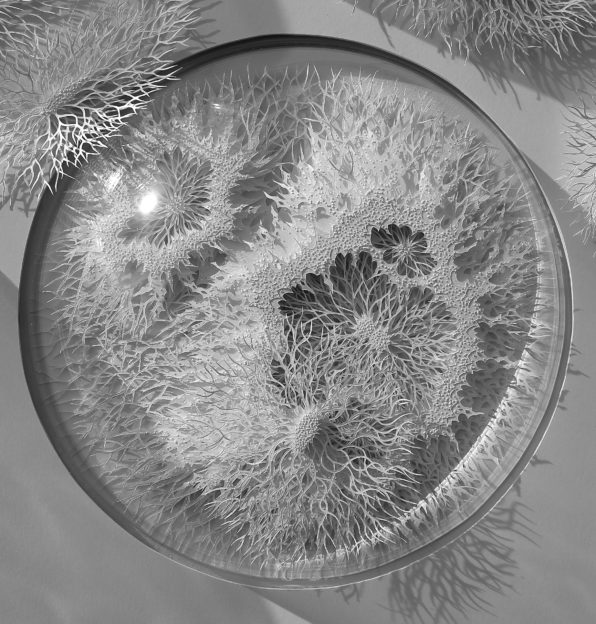 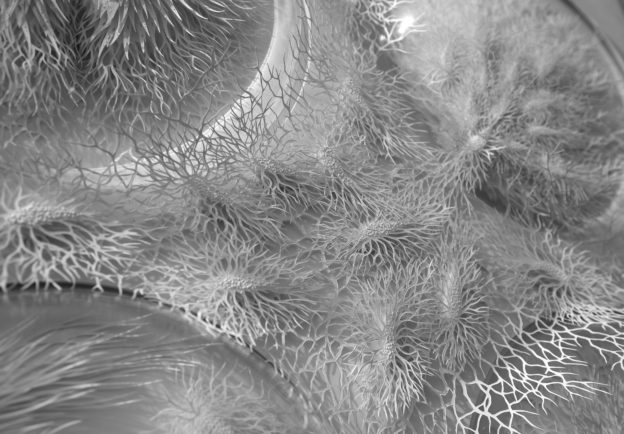 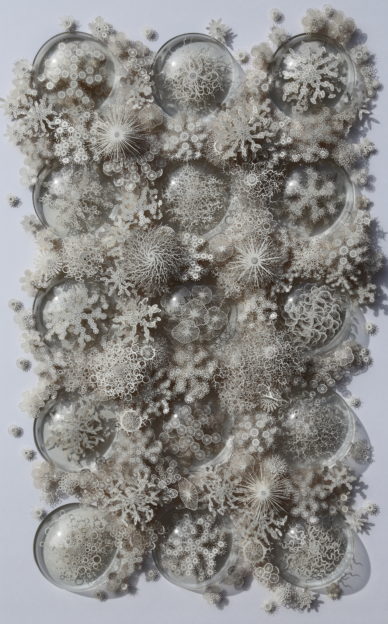 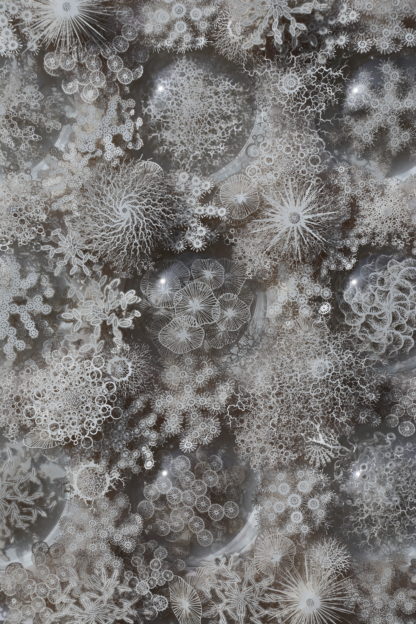 Science as saviour, science as destroyer. Even as we laud the efforts of scientists in their fight against the virus and praise the heroism of medical staff treating the victims, the internet is filled with conspiracy theories about which scientists created the virus in a laboratory and whether it was released by accident or design. Of course there is no evidence at all to support such theories but they gain in credibility because of this pre-existing bipolarity of attitude.

These fears are figured in these two sculptures by the depiction of an array of petri dishes filled with diverse organisms which have escaped their confines. The message is simple and direct: no matter how hard we try to control and master nature it will always surpass us and frustrate our efforts to contain, define and manipulate it. 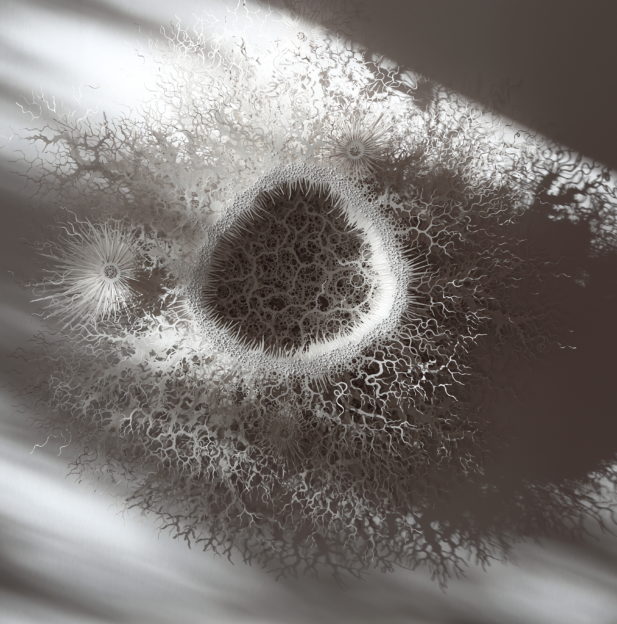 All the sculptures I make are either hand or laser cut from layers of paper and then hand mounted to create three dimensional structures. Paper cutting is a traditional folk art in many cultures and as such it is a simple, accessible and unthreatening medium and therefore perfect to explore sometimes challenging and threatening subjects such as bacteria and outbreaks. It is also a material perfectly adapted to describe the complexity of the natural world as it embodies the paradoxical qualities that we find in nature: its fragility and durability, its strength and delicacy.

All images copyright and courtesy of Rogan Brown

Rogan Brown is an Anglo-Irish artist with degrees in Literature (BA) and Cultural Theory (MA) from Queen Mary College, London University. He has worked as a professional artist for the last ten years exhibiting his work internationally, most recently at Winston Wachter Fine Art, Seattle and Sotheby's New York (Science and Technology exhibition). His work is on permanent display at The Wellcome Collection London and features in Lynn Gamwell's recent book “Exploring the Invisible: Art, Science and the Spiritual” (2020 Princeton University Press). View all posts with Rogan Brown →