Kelly Chorpening: I moved to London in 1999, so though I was educated in the USA, most of my adult life has been in the UK.

Most of my childhood was spent in the suburbs of Cleveland, Ohio. Cleveland is often still referred to as ‘the mistake on the lake’ due to terrible industrial pollution of the early 1970s that led to the Cuyahoga River actually catching fire! However I grew up on the edge of the forest, so a lot of my time was spent outdoors. Though I have lived in cities since the age of 17, I still really long for time exploring real wilderness.

I received a BFA in Painting from the Cleveland Institute of Art. At the time it was a 5-year degree, the first 2 spent exploring all areas of art and design: silver-smithing, welding, ceramics, glass-blowing, 2D and 3D design, painting and hours and hours of life drawing. Overall the teaching was at times rather confusing in the way my teachers came from very different positions, ranging from rather old-fashioned academic teaching (defenders of figuration per se) and abstract, colour theory painters, some of whom had come from the Bauhaus. It was such a rich experience to be caught in their crossfire. This was passed on to students, so critiques were pretty impassioned, to say the least.

I then received my MFA in Painting from Hunter College, City University of New York where my thesis advisor was Valerie Jaudon, with whom I am still in touch. Hunter was a little more like a UK art school in the way they left students to devise their own approach, including handing over the lecture programme for us to organise. We had brilliant visitors and I personally organised a panel discussion with the artists Mary Heilmann, Terry Winters and Jessica Stockholder. I was way out of my depth as the chair, but it was brilliant experience.

The other thing to add is that throughout my BFA and MFA I took every possible Anthropology course on offer. I wanted to think about meaning in art from a much wider cultural perspective.

RB: Have there been any particular inspirations/influences to your art practice?

KC: I don’t come from an artistic family, but when I started to show an interest in drawing (particularly architecture), my father gave me a few lessons in linear perspective, something he learned as part of his training as a civil engineer. So I think being taught to draw by an engineer, and as well working as an archaeological illustrator led me toward conversations about drawing’s uses across a wide range of professions. In other words, my interests have not always started with drawing as fine art, but instead have considered it more as a tool for observation, thinking and communication.

Quite early in my studies I developed a passion for Italian fresco painting, the time when artists such as Giotto were beginning to develop, within churches, more sophisticated depictions of space that related to visual narrative. The Scrovegni Chapel in Padua (completed 1305) is one of my favourite artworks/places. As an MFA student I received a travel grant to conduct research into paintings in India, ones that bore some resemblance to Giotto’s. This a relatively disjointed style of picture-making I never saw as deficient in terms of depicting space, instead I saw the tensions (the ‘wrong’ perspective) as meaningful. A picture that isn’t totally unified into a clear perspectival arrangement for me seemed to reflect different philosophical positions/priorities.

KC: My work is informed primarily by first-hand observation and experience.  I feel my best work has been made in direct response to objects and places. For example, as part of a practice-based research project ‘In- and outside- writing’ a residency within a Belgian béguinerie work immediately took on the appearance of the tiled floor. 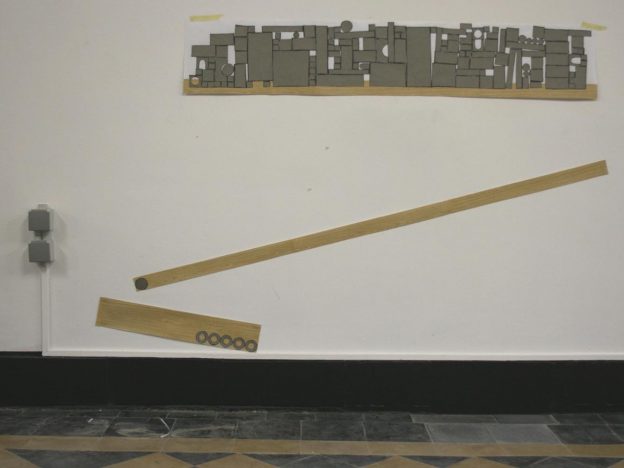 Kelly Chorpening: Work in Progress during a Ghent residency as part of ‘In- and outside- writing’, 2010. 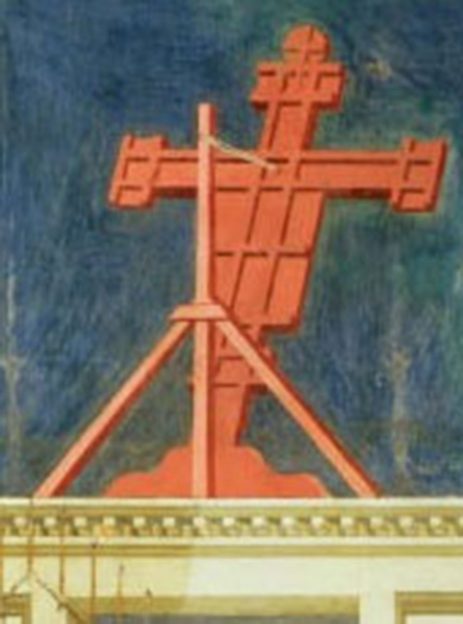 The detail of a Giotto fresco seen in Assisi influenced the more sculptural direction in my work,  eventually leading to work made site-specifically in response to the Dilston Grove interior, UK’s first poured concrete church. 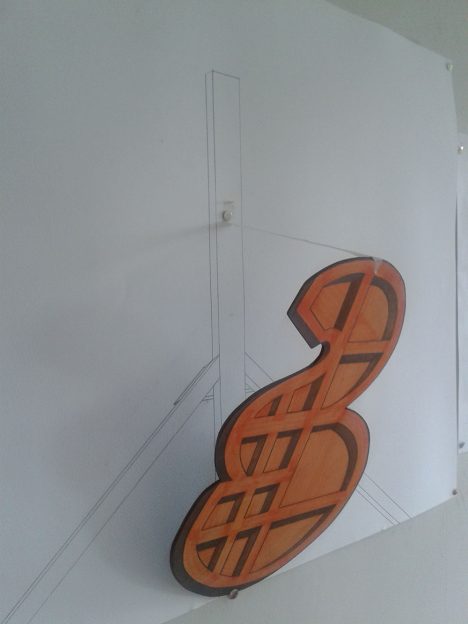 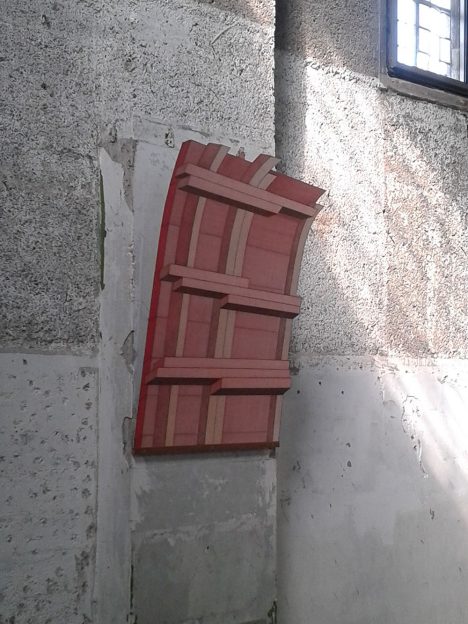 Kelly Chorpening: There are Inherant Contradictions in Most Charitable Gestures [left], marker and pencil on paper mounted to steel, Installation view from ‘Between Thought and Space’ exhibition at Dilston Grove, London. 2015.

As these images demonstrate, the vernaculars of architecture, cartooning and even flat pack assembly instructions all play a part in my work, where the distinction between image and object is more blurred.

RB: How has your artwork changed in the past years?

KC: Around 4 years ago I became more determined to use paper sculpturally. I was looking at the backs of Old Master paintings, studying the conservation and provenance they revealed. I was also looking at poured concrete construction that leaves behind the imprint of formwork construction. This soon got me thinking about creating drawings that had both fronts and backs. The work grew in scale during a residency in Canary Wharf, where I created an incredibly labour-intensive drawing that was hung facing the wall.  Part of it I cut out so the drawing flopped forward. The moment this happened was so dramatic, the way the paper was so elegantly shaped. But I soon learned that it would not withstand the elements and soon lost form and tore. This was when I started working on steel, to use a material that was almost as thin as paper, but capable of defying gravity to remain in a bent, poised position. 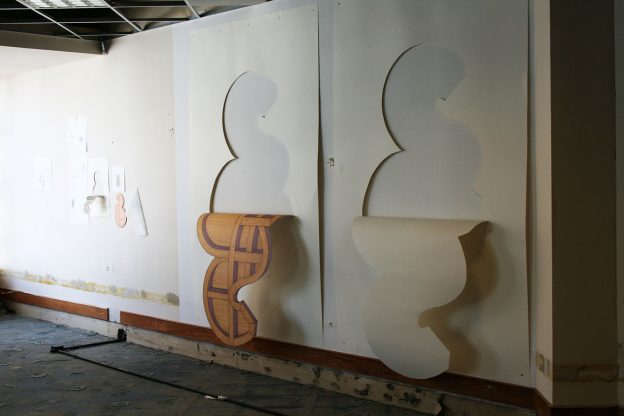 Kelly Chorpening: The Wherewithal [in progress], created during a residency at ‘Punk & Sheep’, Canary Wharf 2014. 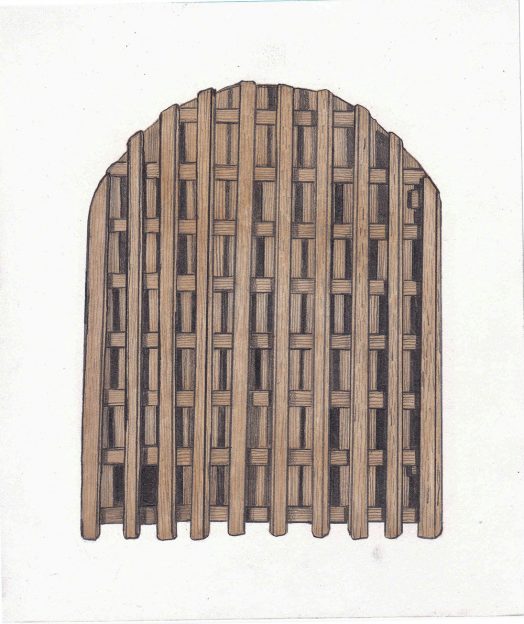 RB: Can you say something about your work Tried and Found Wanting (2016)?

KC: After making a few drawings on steel I realised more of the potential of its strength. Inspiration came from a little drawing I’d made of an amazingly intricate system of battens on the back of a painting, I think designed to prevent it from warping. I was working from a photograph in a book on art conservation (so not the object itself), and never saw the face of the painting. I was so attracted to this construction I wanted to make a slightly slapstick version of the object, as though it was showing off how strong and flexible it could be. This anthropomorphism was furthered by the colour and mark-making, being more flesh-like in colour and covered in tiny dashed lines that could be construed as stubble rather than wood grain. I wanted it to be cartoon-like and elegant at the same time. 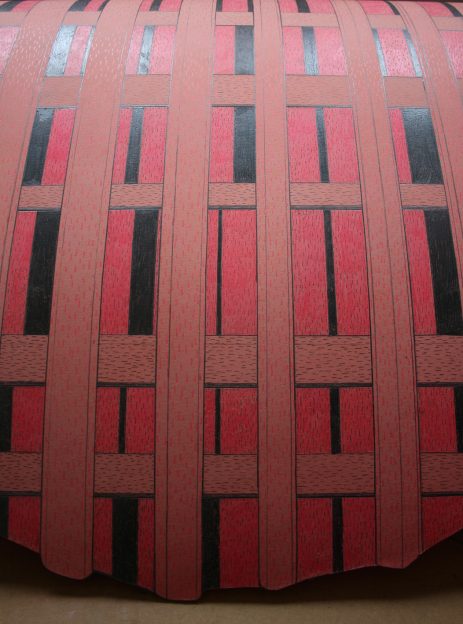 A former student of mine fabricated the steel, scaling up the drawing, plasma cutting the shape and rolling the curve. Paper was mounted afterwards, so this meant the drawing was made on the curved surface, requiring a different set of calculations and tools. I really enjoyed the problem-solving involved in this, in how it related to the conservation of the painting in the first place.

To present the drawing, we calculated that an oak batten and two screws would be enough to hold the object in place. When the work was selected for the 2016 Jerwood Drawing Prize, the technicians didn’t believe it would work, but it did, for the entire touring exhibition! 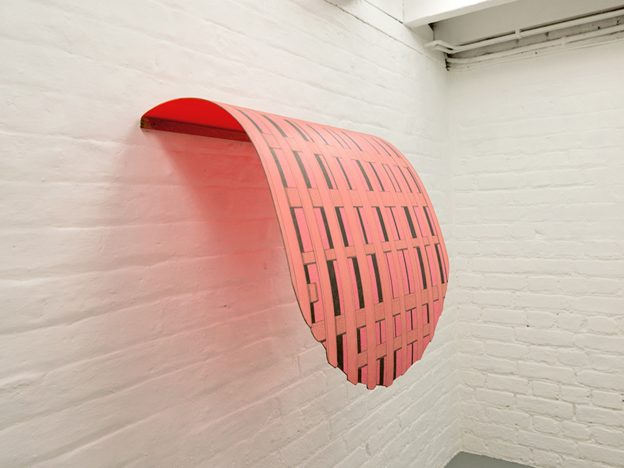 RB: Can you say something about your practice-based research project ‘In- and outside- writing’?

Kelly Chorpening is an artist, writer and educator with an MFA from Hunter College, City University of New York. Selected exhibitions include a recent solo show at Horatio Junior (London) and group shows at Hanover Project Space (Preston), Dilston Grove (London) and Voorkamer (Lier, Belgium). She regularly gives presentations on drawing and many of her projects are co-developed as books. Work has been selected for the Jerwood Drawing Prize (2016) and the Derwent Prize (2016 & 2014). She recently curated ‘A History of Drawing’ for Camberwell Space, charting the practice and teaching of drawing at Camberwell College of Arts since the post-war period and is currently co-editing with Rebecca Fortnum A Companion to Contemporary Drawing, containing newly commissioned essays on contemporary drawing, to be published by Wiley Blackwell in 2018. Kelly has been the Course Leader for BA (Hons) Drawing at Camberwell College of Arts, UAL since 2006. View all posts with Kelly Chorpening →