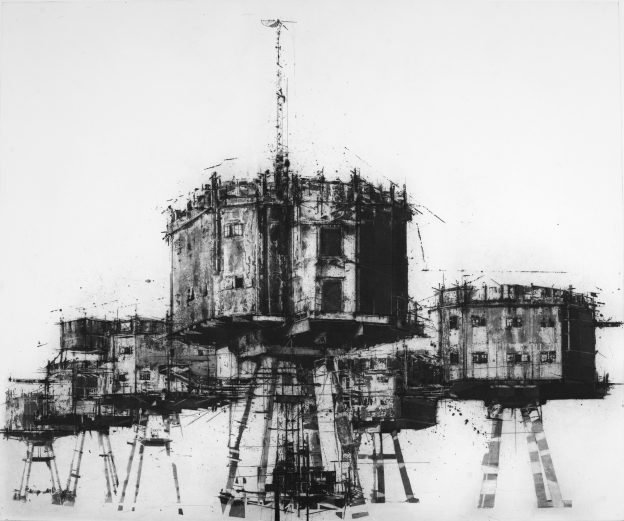 Ian Chamberlain: My background is Illustrative but even then the work had a strong textural connection. I was introduced to etching during my Masters Degree at the University of the West of England (where I now teach) and was able to translate these surface qualities and combine them with my drawing. I fell in love with this combination of the graphic and emotive qualities of the process.

I always had a longstanding interest and focus in manmade forms and technologies and using etching as a way of recording these objects and their locations.

The majority of the subjects I record were considered at the forefront of technology during their lifetime. Some of the subjects I have recorded are now defunct, superseded or have been reconfigured for different uses. My use of etching, a traditional, historic process that has not fundamentally changed in the last 500 years, is certainly not regarded as “cutting edge”. The subject matter therefore is echoed in the process used to record it. My use of the etching process enables me to make a sustained enquiry into the subject’s structure, location and the effects of time passing. It becomes my own original visual experience and a graphic equivalent to an observed moment in time. 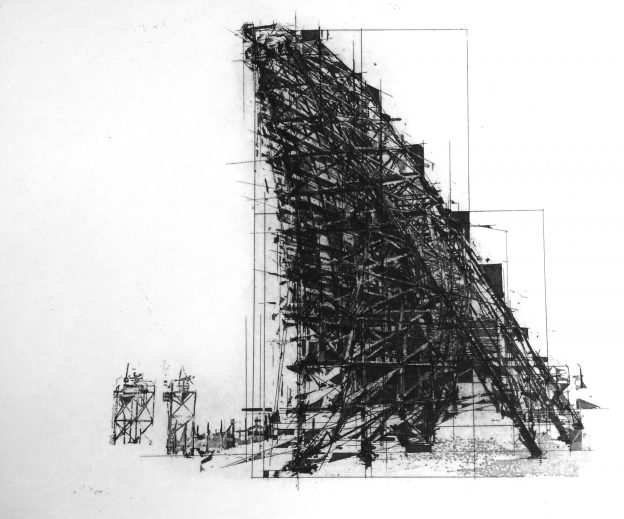 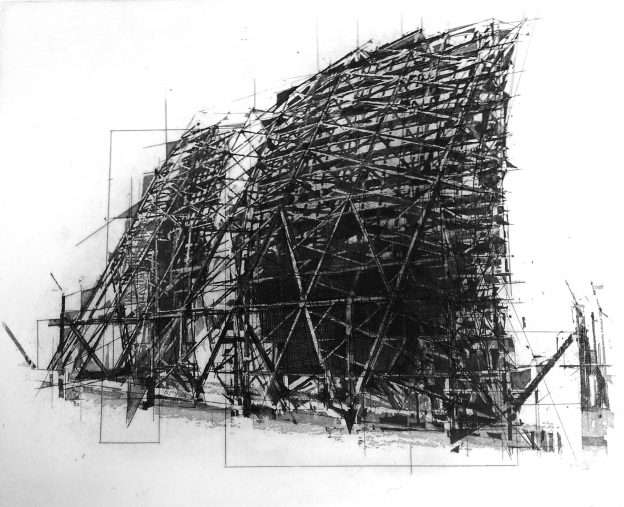 RB: Has there been any particular influences to your art practice?

IC: As well as technology and manmade objects I have been heavily influenced by historical and traditional artistic references such as Morandi, Piranesi, Rembrandt but also more contemporary references such as Bernd and Hilla Becher and George Shaw.

The most influential work on my practice is that of Giovanni Piranesi, who combined the role of the artist and the archaeologist; aiming to discover and preserve the memory of Rome’s ancient ruins.

Piranesi was able to visually restore missing sections of monuments to their original glory. He used etching to witness locations around him, as if he were a wanderer among the ruins in Rome. Etching offered him an ideal means of exploring and recording place. He referred to his use of the process as “speaking evidence”, bringing these architectural ruins to life.

This notion of preservation and conservation has driven me to consider my work as a graphic historical record, constantly trying to retain a visual memory.

After studying Piranesi, my own interests and subject matter became clearer. I began to record locations that had long been of interest, such as the Maunsell Sea Forts in the Thames Estuary, and the acoustic sound mirrors, Kent UK.

The use of drawing, photography, film and printmaking role allow me to visualise my interaction and connection with these monuments.

Whilst the tradition of etching and historical influences such as Piranesi are clear, I am very conscious that there has to be a contemporary awareness in the work and the questioning of what it is I am recording and why? 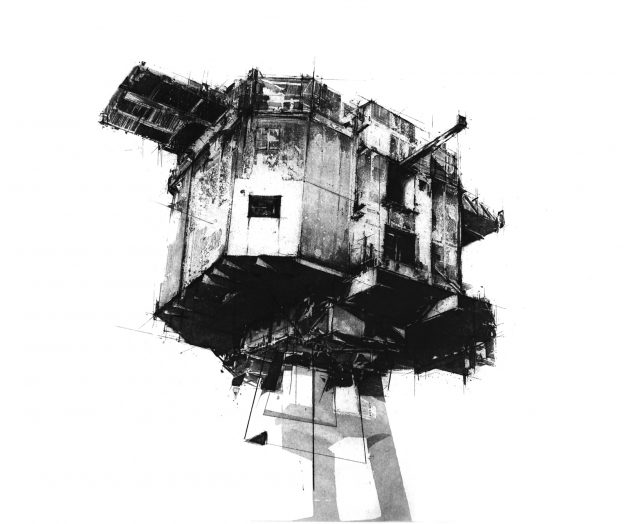 IC: The focus main focus of my work is the exploration of manmade forms, many of which have been gradually superseded, forgotten or abandoned. They were at the forefront of technology for their time but technology and purpose have left some of these structures behind and they have become architectural metaphors or reminders of a past.

The work also looks at the idea of permanence and impermanence. Taking an immediate response – a quick drawing or a photograph – and building from this into something more considered, slower, draws a creative parallel with the way one’s immediate response to a place is different to the thoughts and feelings that emerge later.

Feelings of the object and location shift and deepen over time. But whilst feelings may fade or shift, etchings remain unchanged once finished. The passing of time influences what we remember about the places we visit and there becomes a fine balance in the work—between the spontaneity and immediacy of the original drawn marks and sketches and the lengthier, methodical approach of the printmaking process.

The role of my drawing/printmaking helps me to visualise my interaction and connection with these monuments in order to create my own visual historical document. 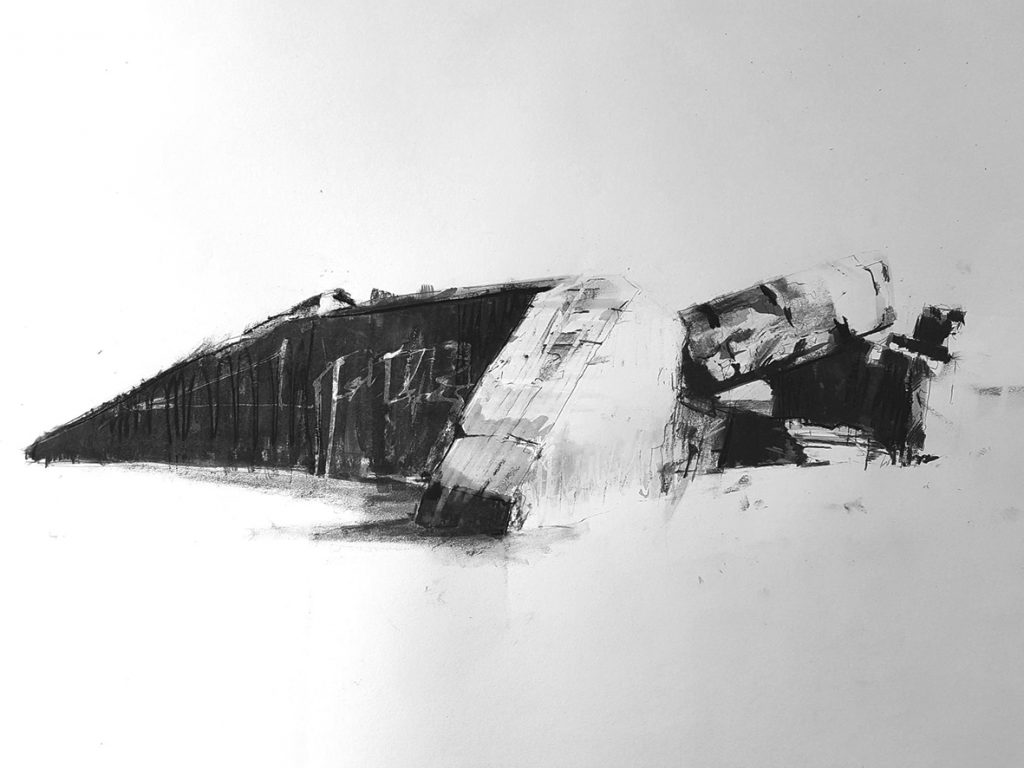 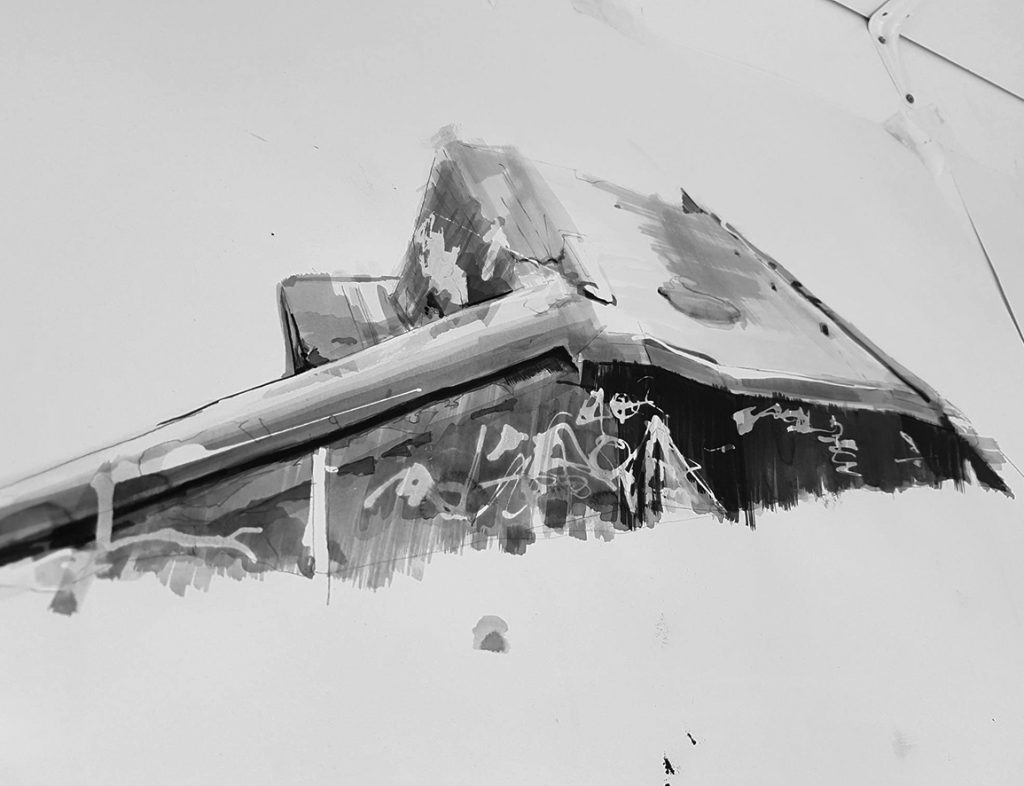 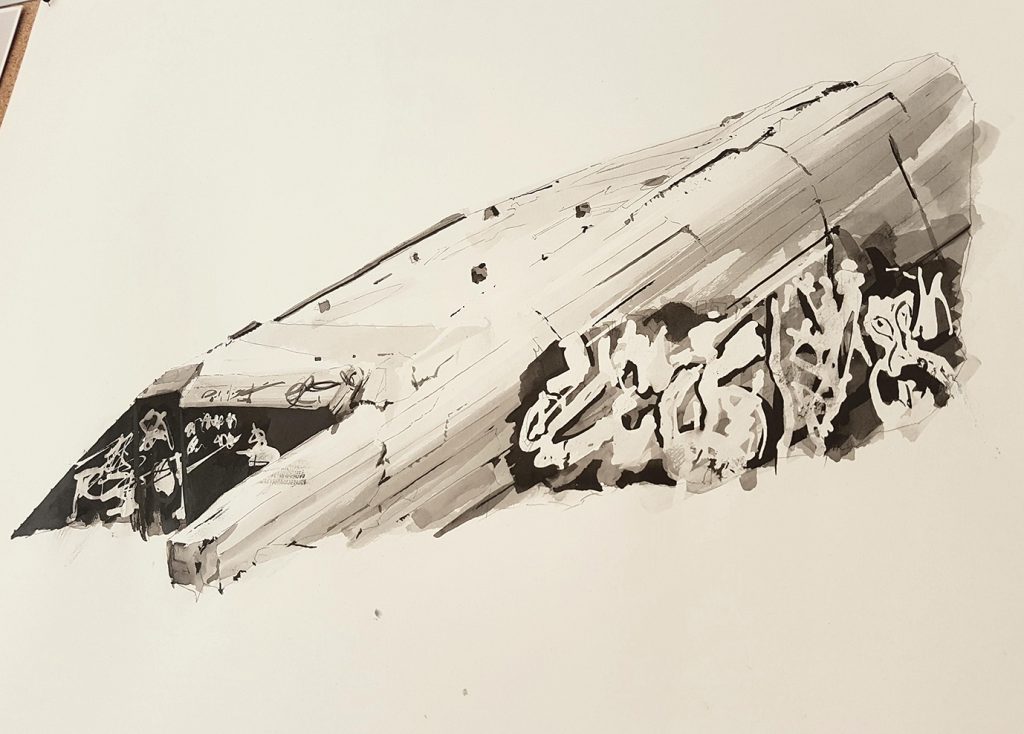 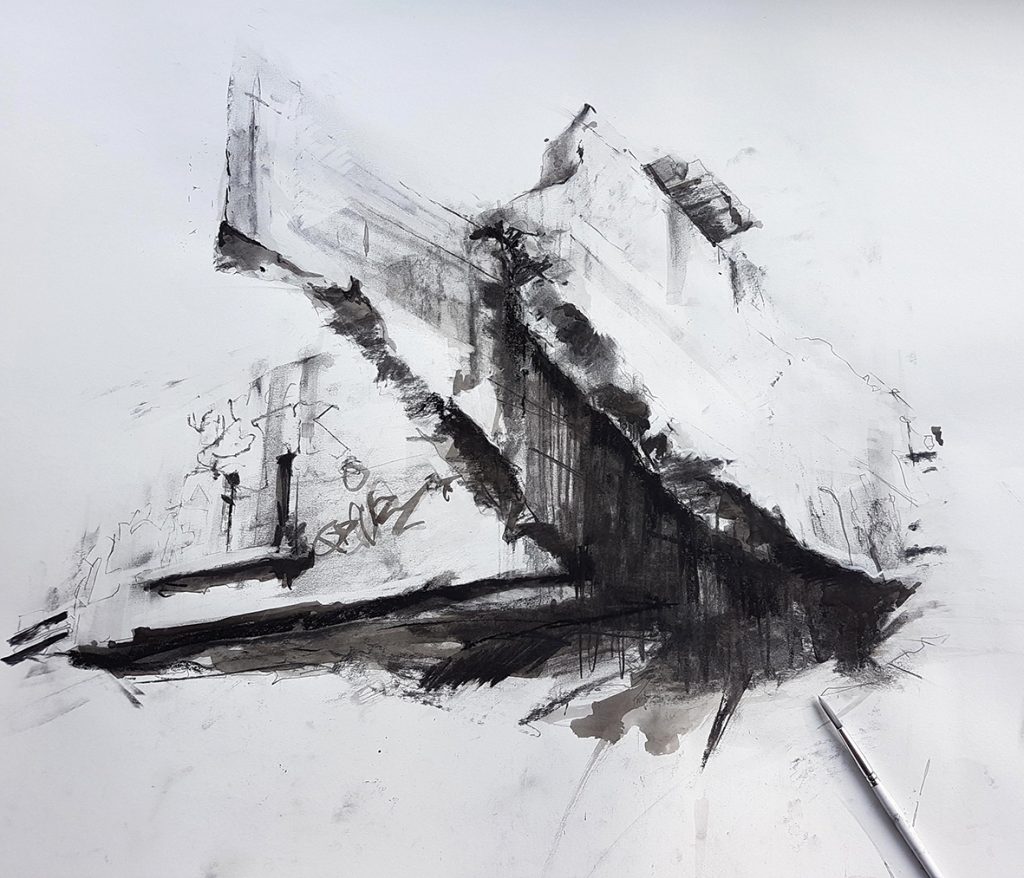 RB: Your work takes reference from manmade technological forms of industrial structures. What do you hope to add to the existing narratives of your subject matter?

IC: The history and function of a lot of my subject matter is unknown to most of the wider public. The work can act as a way in or introduction to these locations and their back history. The work aims to be more than mere reproduction of the subject but a new composition layering, collaging and bringing together new layers of information. There is an interplay between meticulous planning, drawing and pure chance.

The subject is then taken out of context and its surroundings, the structures are shown devoid of the human figure so that architectural scale cannot be based on the physical measurements of the human body. This ambiguity adds to the sense of the theatrical and monumental projecting a feeling of the iconic.

The physical journey to these monuments is important in itself, the process of identifying and travelling to remote places, feeling the wind and rain, the bleakness and emptiness. All these physical elements feed into an emotional resonance that influences the finished work. 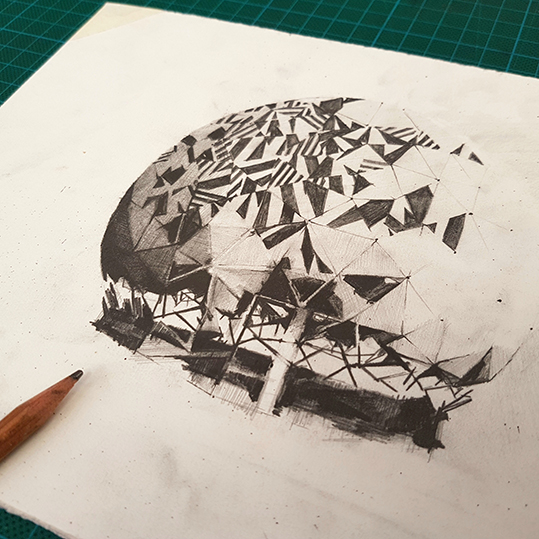 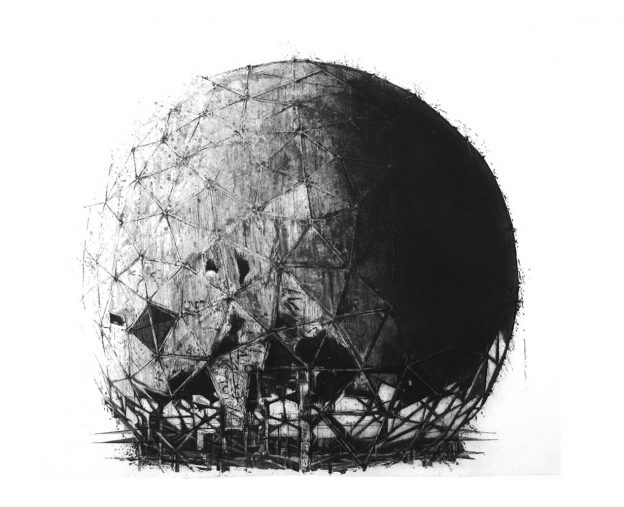 RB: How are your drawing process and printmaking related? Can you say something about how they inform one another in your working process?

Bristol-based artist Ian Chamberlain’s work takes its influence from man-made structures. Reinterpreting them as monuments placed within the landscape, these objects in turn become landmarks of their time. The etchings serve as a visual historical document and record. As the River Thames and Mersey's Maunsell Sea Forts are slowly subjected to persistent erosion, Ian’s prints become a documentation, capturing the moment in time before the inevitable occurs. Using the traditional print process of etching, his aim is to represent and interpret the form and function of these objects, the copper surface is constantly revisited and altered continually evolving. The etching process has not significantly altered for over 500 years which adds to Ian’s interest in recording new technology with a traditional process. Though Ian's practice focuses largely on his various encounters with architectural and technological features. Ian has exhibited extensively within the UK and internationally, his work has featured in the Royal Academy Summer Exhibition over several years as well as in Hong Kong, New York, Barcelona and Berlin. He was also shortlisted for the 2014 John Ruskin drawing prize, The Aesthetica Art prize 2015 and Shortlisted for the Jerwood drawing prize in 2017. He is a Senior Lecturer in MA Printmaking and Drawing and Print at the University of the West of England, Bristol. View all posts with Ian Chamberlain →