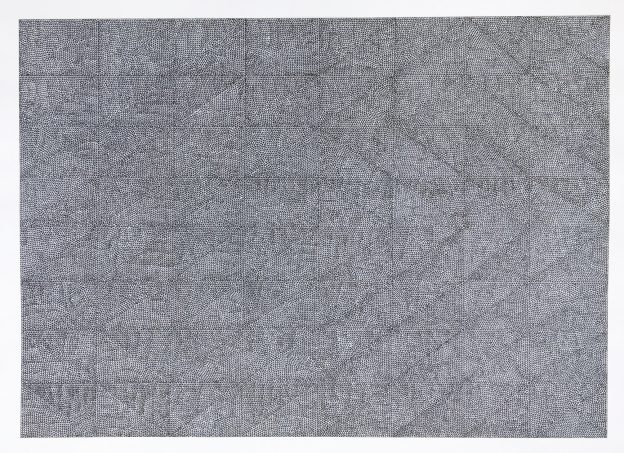 Giulia Ricci: I grew up on a small family-run farm and as a child I used to spend hours drawing and painting. I loved it and knew I wanted to do art for a living one day because that was where I felt at home. When I was 13 my parents wanted me to study classics, which is not uncommon in my native Italy, so my teenage years were spent learning ancient Greek and Latin, while cultivating my self-led art practice in my own underground world after school; I exchanged lots of my artwork by post with a pen friend living at the other end of the country.

After getting my high school diploma I was free to choose my university degree and I enrolled in the painting course at the Academy of Fine Art in Bologna, where I commuted to every day by train; I was very attracted to the sculpture course, but I had to take an entry exam in order to gain a place in the course and I never thought I’d pass the sculpture entrance examination given my lack of formal art skills. My work wasn’t really painting, it was mostly collage and assemblage. I think that my head was trained to see things in a historic perspective, therefore after a year at the Academy, I also enrolled for a degree in history of art at the University of Bologna, and completed both of them. I also travelled a lot, on my own, in those years as part of my education, and had various part-time jobs.

Eventually, it was my commitment to art that gradually took me away from my rural village; I moved to London in 2004 after finding a job at the British Library. Having no studio space to start with, I went back to drawing on paper and through a post-graduate course in sculpture (at the Slade School of Fine Art, 2005-2007) I started to think more rationally about what I was trying to do with my work: patterns and systems, my cultural background and influences, the physical and technological world around me and how it’s constantly evolving. I am still working on understanding these themes and trying to work out their relevance as times evolve. I really owe a lot to my tutor Edward Allington (who sadly passed away last year) who patiently and generously contributed to my journey in finding the language and the forma mentis to understand where I was trying to go. 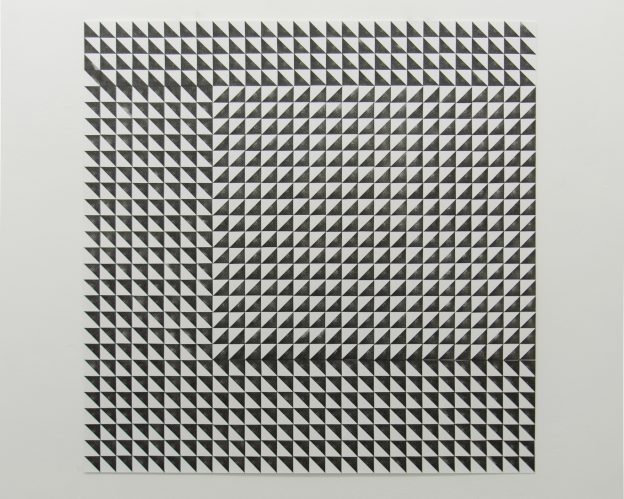 RB: Have there been any particular inspirations to your art practice?

GR: Yes, of course, lots of different things, sometimes apparently contrasting with each other. I have always had a passion for simplicity and minimalism; at the same time, I am attracted to intricacy and intensity. Some artists I really like are Anni Albers, Alighiero Boetti, Agnes Martin, Monir Farmanfarmaian, Eva Hesse, Tess Jaray, Susan Collis, Shelagh Wakeley, Tauba Auerbach and Grayson Perry, just to name a few. I am very interested in architecture and love the work of Carlo Scarpa and Aldo Rossi. Islamic architecture is also a great reference for my work; I came to appreciate it through its influence over the architecture of my native Italy.

I love textiles and carpets and I am generally very attracted to the physicality of objects, no matter what material they are made of. I like to seek out the beauty of mundane things, such as, for example, some Victorian iron work, where minimal and simple decoration can be functional and have a very refined aesthetic sense at the same time. I grew up in an environment where there weren’t too many objects, some of which were quite old and had been passed down from previous generations, and most things that were there had a practical purpose. I don’t like visual clutter and I live and work in a house where there aren’t too many things on display. 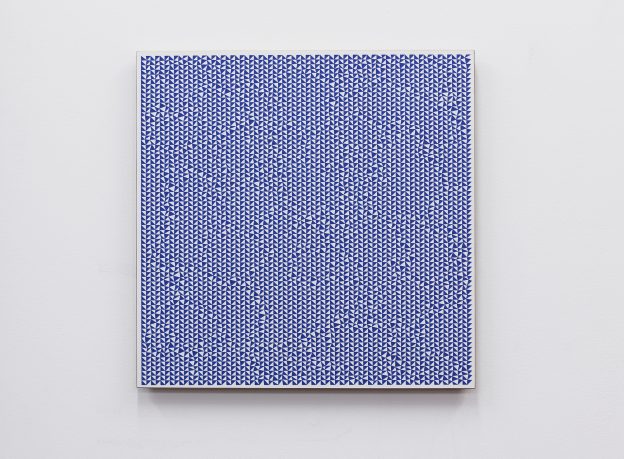 Giulia Ricci: Order/Disruption Painting no.4, 2012. Laser engraved laminated board, hand-painted with acrylic paint. One of an edition of 5, numbered and signed at the back, 36 x 36 x 1.8cm

Landscape is also an important part of my inspiration, even though indirectly. I love walking. I generally discover interesting shapes and compositional strategies when I am walking, in buildings, in the natural landscape or just on the pavement; I don’t use these elements directly or literally in my work, but they give me opportunities to reflect on where I am trying to go with the direction of what I am doing in my work. I think that my visual sensibility has been shaped by the flat and geometric rural landscape in which I grew up; this is something which is engrained in my eye.

When I was younger and I was still living in Italy I was much more concentrated on the spoken and written word than since I have been residing in the UK. I was a passionate reader of Italo Calvino and Primo Levi; both these authors really influenced me with their rigour and accuracy. My favourite and most influential book is still Six Memos for the Next Millennium by Calvino, which I first read in 1996; even though it’s primarily a book about literature, the qualities described in it have always resonated very strongly with my thinking and making as a visual artist. I wish Calvino had completed the final lecture about consistency, because it’s such an important theme for me, at various different levels, personal as well as professional. I would have been very interested to know what he had to say about consistency. 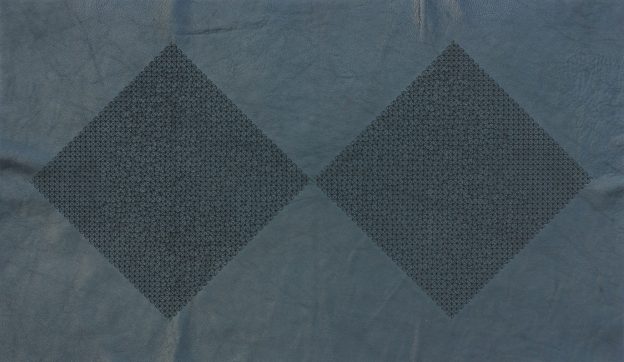 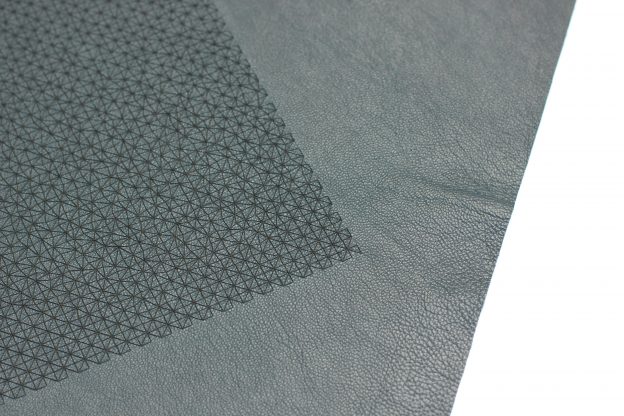 GR: In my work I try to convey a sense of tactility through the visual. The word ‘vocabulary’ is very apt at describing my visual language, because I use patterns and the compositional strategies that come with patterns, such as repetition, rotation and mirroring, so there is really a set of principles that I refer to. These principles are generally articulated around the use of the grid which is then divided up into right angled triangles.

Two quite different past experiences have been instrumental in better understanding and establishing my vocabulary: one has been a residency I did at the Museum of Domestic Design and Architecture (at Middlesex University), while the other has been designing and leading cross-curricular art projects on the theme of patterns with primary school children. Working with children has been particularly inspiring because our explorations and very open-ended conversations on the topic of patterns have drawn up important associations between patterns, processes, materials and the environment around us; I have re-learnt about patterns thanks to the help of the children I worked with. 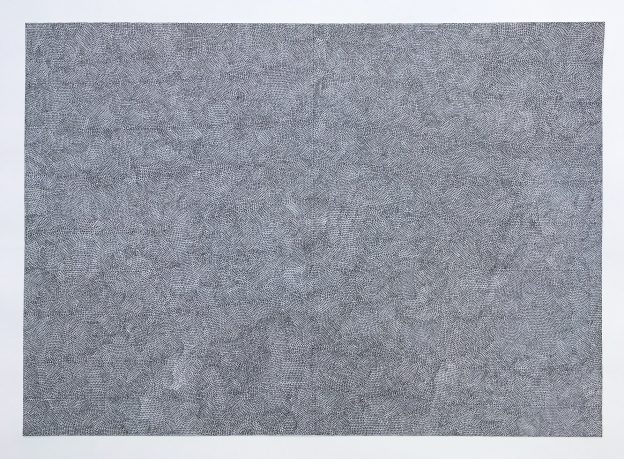 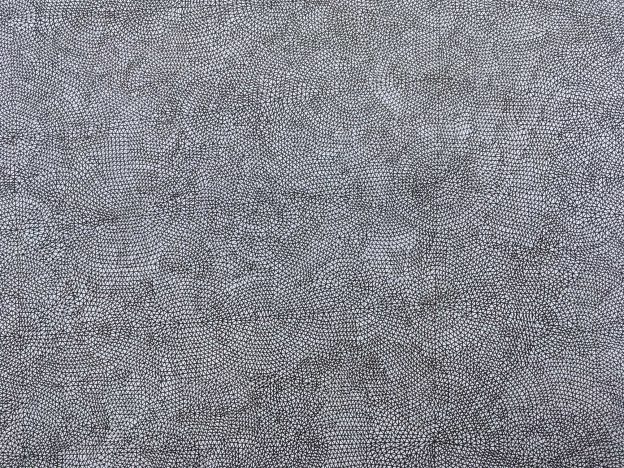 RB: Can you say something about the variety of processes that you use and how they inform one another?

GR: In my work there often seem to be opposites, or pairs of categories, that feed into each other.

Drawing by hand is the primary medium I use, but I also do digital drawings which get printed, laser cut or laser engraved; the hand-made and the machine-made go hand in hand for me, because they influence each other. For example, when I draw by hand I want to be as accurate and repetitive as a machine, then when I laser engrave I try to convey a warmth to the surface, by means of creating irregularities that interact with the texture of the support (for instance on the leather), or by adding a hand-made element that is unique and which contrasts with the industrial quality of the surface of the work, such as hand-applied paint in the editions on laminated boards.

Then there is the issue of scale, which also comes as a pair of opposites: close up and intimate, versus architectural dimension. This duality isn’t a process in itself, but it affects the designing and making of the work, as well as the concept. 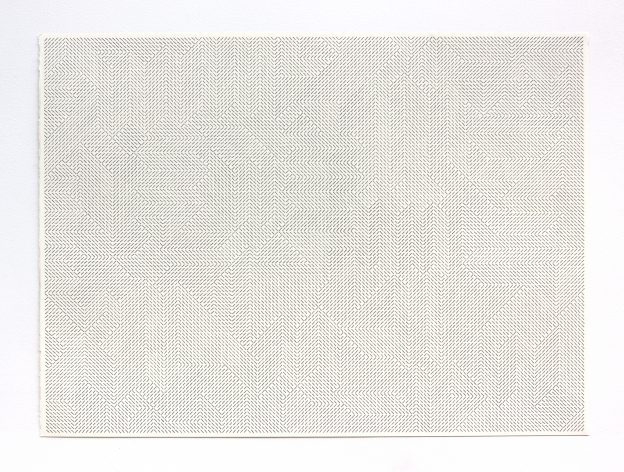 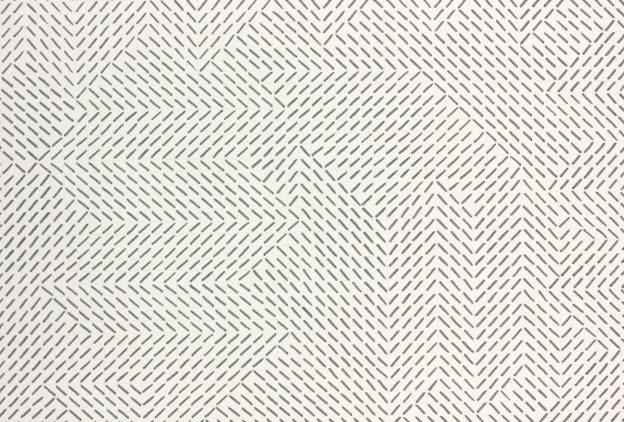 RB: How important is the idea and process of repetition to your work?

Based in London since 2004, Giulia Ricci is an Italian artist who studied painting at the Academy of Fine Art of Bologna, and sculpture at The Slade School of Fine Art, London. Her work has featured in group shows in the UK and abroad, and was included in the drawing anthology Walk the Line: The Art of Drawing (Laurence King, 2013). She was shortlisted for the Jerwood Drawing Prize in 2010, 2011, 2015 and 2017, and is represented in London by Bartha Contemporary. View all posts with Giulia Ricci →