Anna Sofie Jespersen: I grew up in Aarhus, Denmark. A city large enough to have a contemporary art museum (Aros), but small enough that everyone knows everyone. I moved away from there as soon as possible to study in London. As a kid, I couldn’t wait to grow up, the irony being that it has taken me this long. After completing my BA at Chelsea College I hung around London for a year before moving to New York. I love London, I miss it. I miss the dry, rain-drenched, sarcasm saturating everything. I miss Wetherspoons chips and Brixton Market, I miss mysterious Hackney warehouses where you don’t know whether its night or day, and cycling over Vauxhall bridge at night. I am still getting used to living in America, or rather this surreal city state that is New York City, separated from the rest of the country. 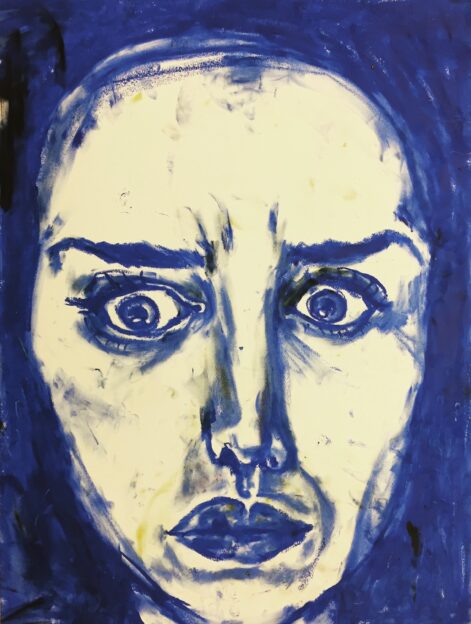 ASJ: The first show that really changed something for me in terms of choosing art as a means of expression was Christian Lemmerz’ 2010 show Genfærd/Ghost at Aros, Aarhus. Seeing otherworldly marble renderings of macabre, grandiose violence was very impactful for me at 17. It was an inaugural experience of being seen or something. My early work possessed a similar dramatic, theatrical hue. I was reading Crime and Punishment by Dostoyevsky around the same time, and was very occupied by notions of good and evil. I read slowly, I can have books on the go for many years. I took me a little over a year to get through Infinite Jest by David Foster-Wallace. I brought it with me on a trip to Australia in 2017, both my boyfriend at the time and another friend had had it previously, so it was rapidly disintegrating. I had to makeshift a sleeve for it out of a Kellogg’s Coco Pops cereal box. It became this indexical relic for me. It must be hidden in a storage unit somewhere in Peckham now, still covered in red dust from Darwin, falling apart.

That book had a profound influence on my practice. DFW’s treatment of time and (dis)continuity resonated with how I think of my own work. The way the narrative jumps back and forth in time and makes use of intertextuality, genres within genres, polyphonic voices and footnotes mutating into parallel narratives, interrupting any kind of habitual feelings towards the text, rewired my brain. As well as an insistence on elaborating on detail to a ridiculous extend, to form one chaotic whole, with contradictory currents moving beyond the length of the novel. It represented a painfully accurate description of my internal space that I hadn’t encountered before. 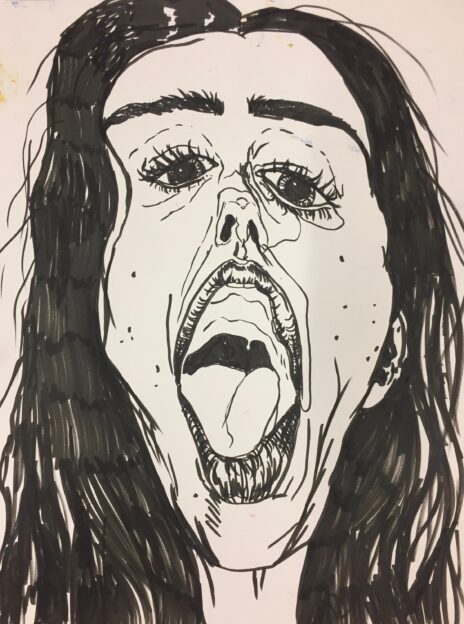 ASJ: I have a somewhat nihilistic, solipsistic streak in my work, although I think I’m generally a pretty cheerful person. In my drawings I project desires and fears onto other people, imagining their emotional states, but never truly engaging in them, or perhaps not understanding them. A lot of my work is about my relationship with my parents and my brother. Picking apart the nuclear family structure and its anxious crevasses. Occluding Edge, 2017, was an attempt to articulate this anxiety. I think I was beginning to perform a critique of the ideological structure my parents had built around me, unaware of it at the time.

The compulsive notion that nothing exists outside one’s own perceptive modes is hard for me to let go of. I sort of hold the belief that we are truly alone, and other people and entities can merely pay a visit to our weird little worlds. I suppose I was hanging out a lot by myself as a kid. The truth is that I am obsessed with communities and never was able to find one to truly be a part of. I was born into a commune of sorts, then my parents moved to the suburbs when I was five. It always was this lost paradise for me. I suppose childhood is that for everybody. 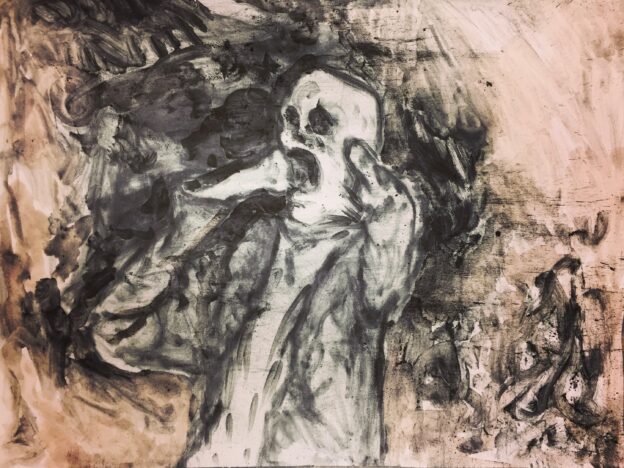 RB: What inspires and ‘informs’ your drawing practice?

ASJ: Time. Time keeps me up at night. Drawing, to me is all about time. I insist on the dissimilitudes between draughtsmanship and painting, and was always very fussy about it. After my first painting critique at Camberwell Foundation, I knew that that wasn’t what I was. My work is more maps than it is built up layers. I want to see every mark. When you paint, you add layers on top of other layers, that to me suggests an inherent element of concealment, which sort of confuses me, I think. When you draw, every mark is visible, splayed out. To me that is a recording of time. I think that this is why each piece is so large. It takes as long as it is big. In Cinema 1, Gilles Deleuze compares the cartoon with frame-by-frame moving image, describing drawing as not constituting a pose or a completed figure, but the description of a figure, always in the process of being shaped or dissolving through a movement of lines. That really stuck with me. Sometimes I start drawing something in one way, and over the course of the rendering, my relationship to this object or subject has changed so the drawing will change accordingly, as a continuous lineage. Formally, I guess you can say that time dictates the outcome for me. 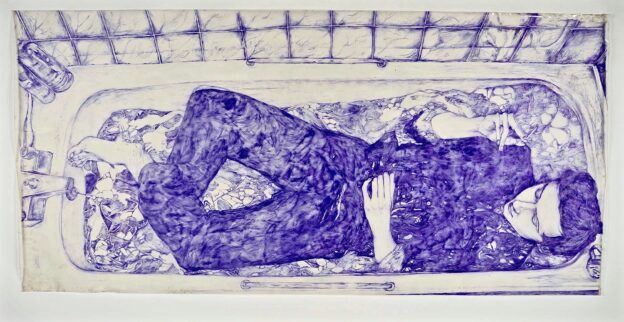 RB: Can you say something about the use of narrative in your work?

ASJ: I am obsessive about prolonged narratives and accumulation of things. I have a playlist on Spotify I’ve been collecting for 7 years now, that has become one long soundtrack for a film never to be made. I am a very nostalgic person. I often fall into that type of present-time nostalgia, where you experience a moment in retrospect, already lived. I’m sure this is the case for many people, but I admittedly do take pleasure in cultivating it. I dwell, I’m such a dweller.  I find that I often will make drawings for songs, like flat, motionless music videos. The drawings take so long to make, so often they become the accumulation, or recording of a series of cinematic experiences. I like to make a good scene. 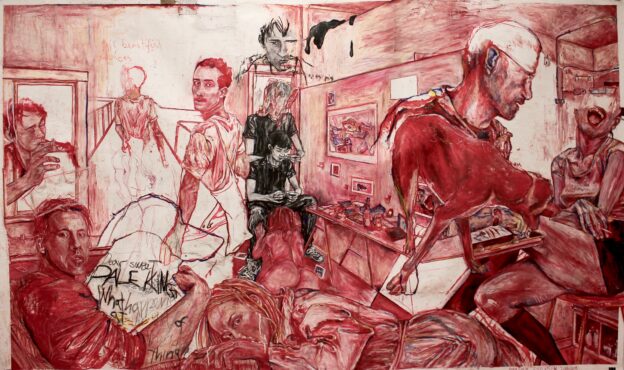 ASJ: The destiny of this drawing has been a real odyssey. It travelled from Vermont, to New York, then from New York to London, then from London back to New York. It was lost, then found again, then forgotten, then finished. It sort of became a recording of a turbulent time in my life, accumulating tears and scuff marks along the way. The title is stolen from Dutch artist Bas Jan Ader’s piece of the same name, a three-minute black-and-white silent film of him crying for reasons unbeknownst to the viewer. I very much felt like this at the time of making this piece, unable to articulate, only able to show something unknown to myself.

In the drawing I am doing lines of cocaine with my dad. I drew him looking younger, and my teeth are yellow from old age. This fictionalized reality is common in my work, as well as the compression of time. This piece is an expression of a childlike refusal to make choices, of wanting to splinter time and manipulate it. 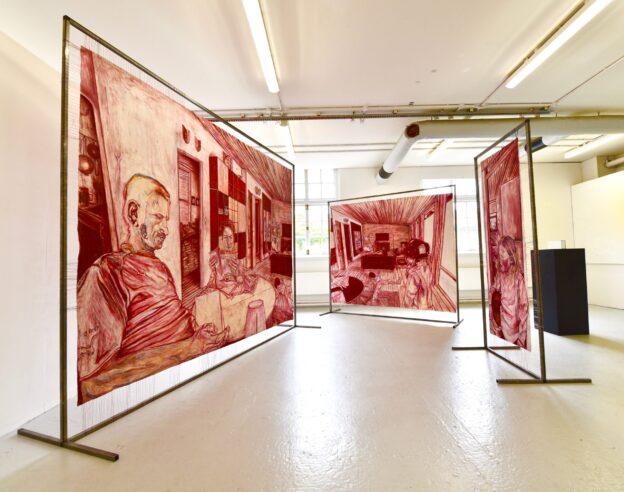 RB: Can you say something about your set of 3 works Occluding Edge?

ASJ: I wanted to talk about misrepresentation and things hidden by time. It’s a ghost story, really. Another title for this piece is fehlleistung or Freudian slip. Something hidden, and thus something revealed by its hiddenness. The inherent unreliability of one’s perceived reality is interesting to me. Occlusion also means a blockage of a tube of blood vessel. I like to think of the piece as a fleshy suggestion of a room, fragmented, and consisting of soft tissue held together by stringy tendons with pulsating rhythm. I have a total obsession with abject, bodily, architectural spaces. Movies such as Żuławski’s Possession or Cronenberg’s Videodrome, have been influential for me. 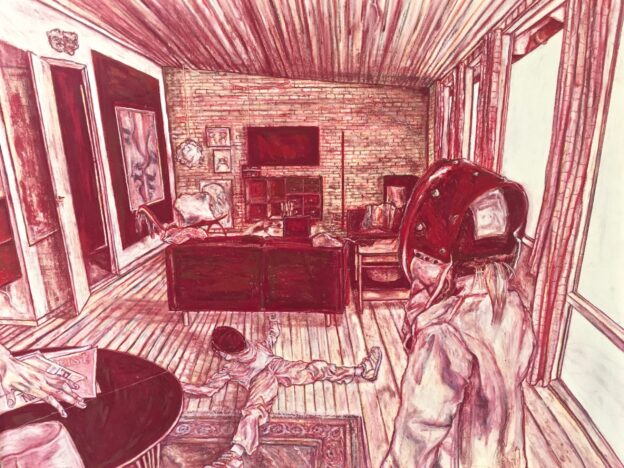 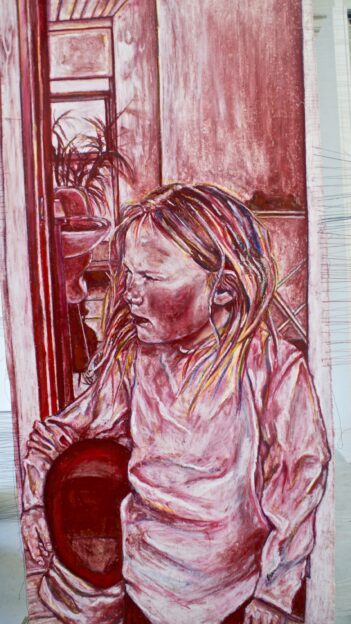 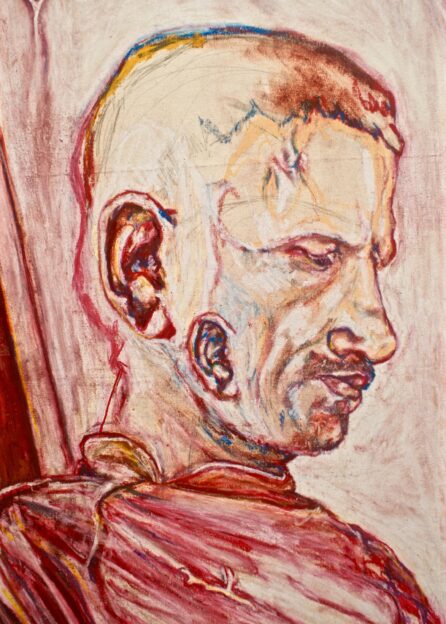 RB: How has your drawing process changed in the past years?

ASJ: After moving to New York I’ve practically done everything but draw. I had to step back from it a little to get a better understanding of what I was actually doing. I have been undergoing a personal metamorphosis that has lasted at least two years, building up to a real drawings renaissance. Last year I did the performance series, In the Bathroom, taking place in public bathrooms around New York City. It was a musical performance consisting of songs I had composed, readings of Arthur Rimbaud and Sylvia Plath, as well as the sounds of my own urination, amplified through a portable children’s karaoke microphone. I wanted to examine the communal vulnerability of a space where people can let their desires surface. Historically, humans go there to shit and piss, but also to cry, maybe to hit the wall, do drugs, throw up or have sex. It can be a place of safety, but also of danger. I like this duality. 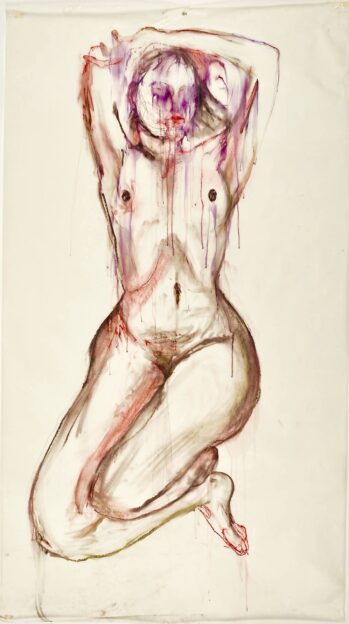 ASJ: My biggest ongoing project at the moment is a screenplay I’ve been collaborating on with the AI text completion program, GP-2. I’ve been feeding it parts of conversation between Jean-Paul Sartre and Simone de Beauvoir from her book Adieux, jumbled with conversations between myself and an ex-boyfriend. It has been a way of surrendering to an outside entity to solve an inter-relational problem. It is a piece about relationships and miscommunication, and therapy, I think. The AI program works similarly to dreams, in that it scoops up snippets of impressions, angles, symbols and representations, tropes, and then blends it into this mass of content, and spits it out as something new with detectable meaning and recognizable imagery, but distorted, disfigured and dislodged. I think we have that in common.

All images copyright and courtesy of Anna Sofie Jespersen

Anna Sofie Jespersen is a Danish artist who produces emotive figurative works. Anna’s powerful drawings are laden with feeling. Her large scale works have a particularly strong impact. She trained at the Chelsea College of Art and has won awards for both drawing and painting, including second prize in the 2016 Jerwood Drawing Prize for her work ‘Sid in Bathtub’. She was shortlisted for the 2017 Bloomberg New Contemporaries. View all posts with Anna Sofie Jespersen →