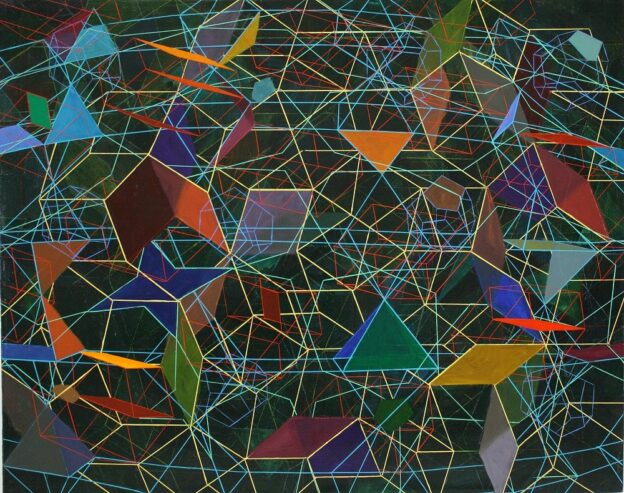 In the painting reproduced above, the five sheets are: 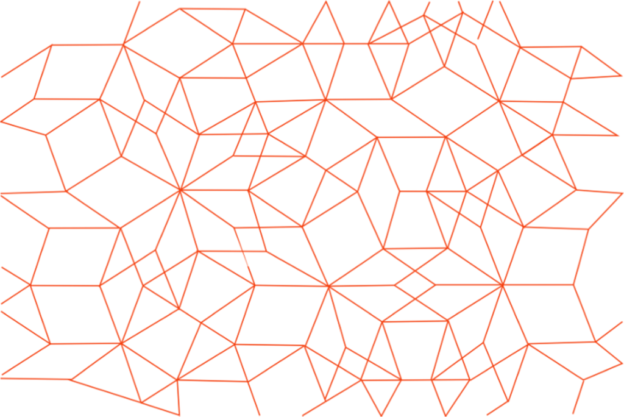 Above is quasicrystal lattice in 5-fold orientation where the acute angles are 72 degrees and 36 degrees; it is a slice through a quasicrystal cloud that was made with the deBruijn algorithm, where whole cells are taken.  Software of my design. This lattice is yellow in the painting. 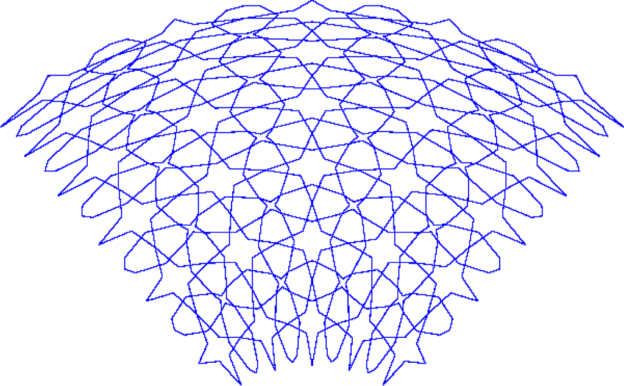 I call the pattern above Persian Dome. The two fundamental tessellation elements are an elongated octagon, and a four-pointed star, which also has eight sides. The octagons are tessellated along two perpendicular axes and are slightly separated forming small four-pointed stars as negative shapes. The larger four-pointed stars are tessellated point to point. The pattern is from Islamic architecture, and “domed” by me using Formian software (see note at end of essay) from the University of Surrey in Guilford. In the painting, this pattern is light green. 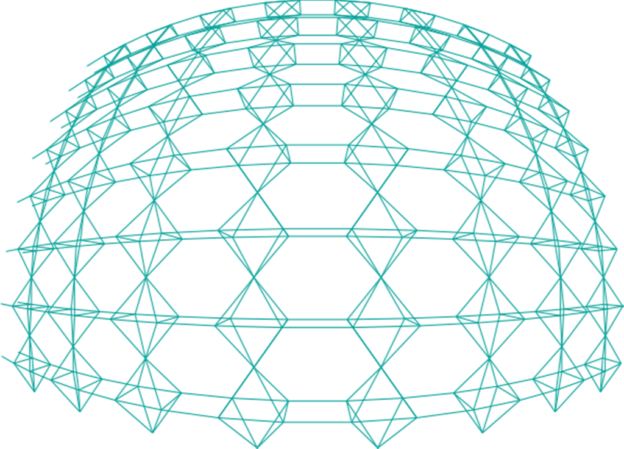 Also created and curved with Formian is the lattice above, which I call Nose. Octahedra are tessellated vertex to vertex in the north-south axis, but they are separated by line segments in the east-west axis. The curvature is on the order of a nosecone, but whether or not it is exactly parabolic is hidden in the Formian software. In the painting, this lattice is light blue. 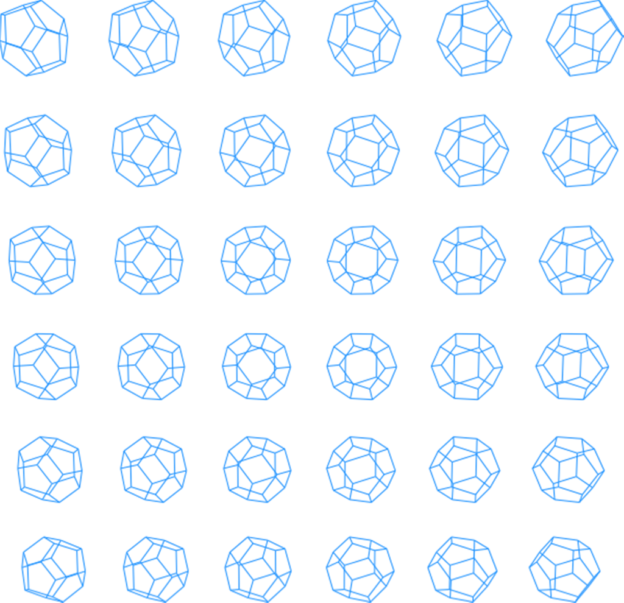 Dodecahedra flat, above, is a disconnected lattice; such lattices are anathema to topologists (how would one count the holes?), but the disconnected lattice suits my purpose, which is to define a slab of space without cluttering the field of view. Formian generated this field of dodecahedra, drawn in perspective, and oriented flat (or almost flat) to the picture plane. The dodecahedra are a delicate white in the painting. 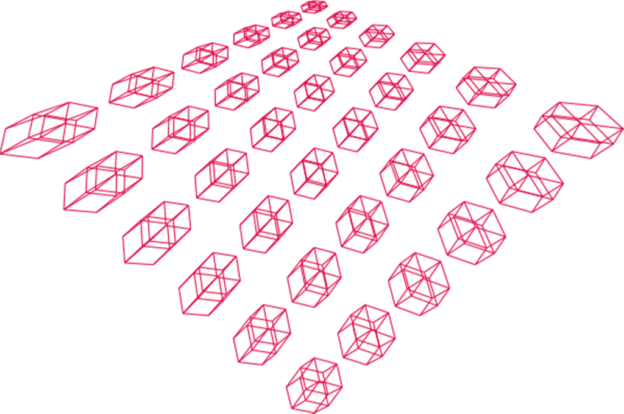 2ZHP, above, is a field of rhombic dodecahedra, which are the simplest sub-assemblies in a three-dimensional quasicrystal. There are three such sub-assemblies, often called zonohedra [2]. Shown above is the complete hypar projection, but only a section of this is used in the artwork. The disconnected vermillion figures dance around, twisting and flexing, as the zonohedra are shown projected to a doubly-curved surface and drawn in perspective.

Overlap, Braiding and the Artifacts of Projection

Elements in each of the five patterns (let’s also call the lattices and disconnected fields patterns) are filled in with color, which are sometimes opaque and sometimes transparent. These filled plates define the braiding at that point: opaque ones are clearly on top, the others clearly underneath.  They are on top at one place and paradoxically underneath at another. Lattices can intersect or can only appear to as an artifact of projection (four to three and again to the picture plane.) Also, objects can be close to the viewer in the third dimension and far away in the fourth dimension.

Sorting out all these complications is not the point. My paintings are not equations, and it is not possible to read a mathematical resolution in them. Rather they revel in the richness and paradox of higher-dimensional visual phenomena. With a knowing nod to the mathematical possibilities, the paintings encourage an acceptance of such spatial complexity. Further, they encourage a taste for, and even a giddy joy, in spatial complexity.

In 1952 Albert Einstein added a fifth appendix to his popular 1916 book Relativity: The Special and the General Theory. The following quote, which I read 45 years ago, is one of the most important sources for my art, of which I count only three or four.

When a smaller box s is situated, relatively at rest, inside the hollow space of the larger box S, then the hollow space of s is a part of the hollow space of S, and the same “space”, which contains both of them, belongs to each of the boxes. When s is in motion with respect to S, however, the concept is less simple. One is then inclined to think that s encloses always the same space, but a variable part of the space S. It then becomes necessary to apportion to each box its particular space, not thought of as bounded, and to assume that these two spaces are in motion with respect to each other.

Before one has become aware of this complication, space appears as an unbounded medium or container in which material objects swim around. But it must now be remembered that there is an infinite number of spaces, which are in motion with respect to each other [pp. 138-9, emphasis added].

At the end of the paragraph, Einstein adds that this notion of “spaces” is “far from having played a considerable role even in scientific thought.”

My abbreviated paraphrase of the Einstein quote, many spaces in the same space, became my shorthand for a more complicated view of both the objective space of relativity physics and the subjective space of my experience. I lived in and was formed in different places: Japan and Iran;  New England and Europe. I worked in or was influenced by different traditions: Persian miniatures and Abstract Expressionism; nineteenth century French painting and computer art. I was a juvenal delinquent, an athlete, a scholar, a hippy, an artist.

Many spaces in the same space.

A note on Formian: Formian was developed by the Engineering Department at the University of Surrey in Guilford. It was created to generate geometry for architectural spaceframes. It not easy to use, and there is no manual. Nevertheless, it has functions that are very useful for topologists and artists. It generates patterns by reflecting, rotating, and translating simple elements; it has many procedures for curving patterns and lattices; and it allows one to work in an arbitrary number of dimensions.  Extra dimensions can be added or subtracted as the patterns are being generated: it is not necessary to specify data structures in advance.

‘Topology and the Visualization of Space’ was first published in the Open Access Journal, Symmetry (30 December 2014)

This article belongs to the Special Issue Diagrams, Topology, Categories and Logic